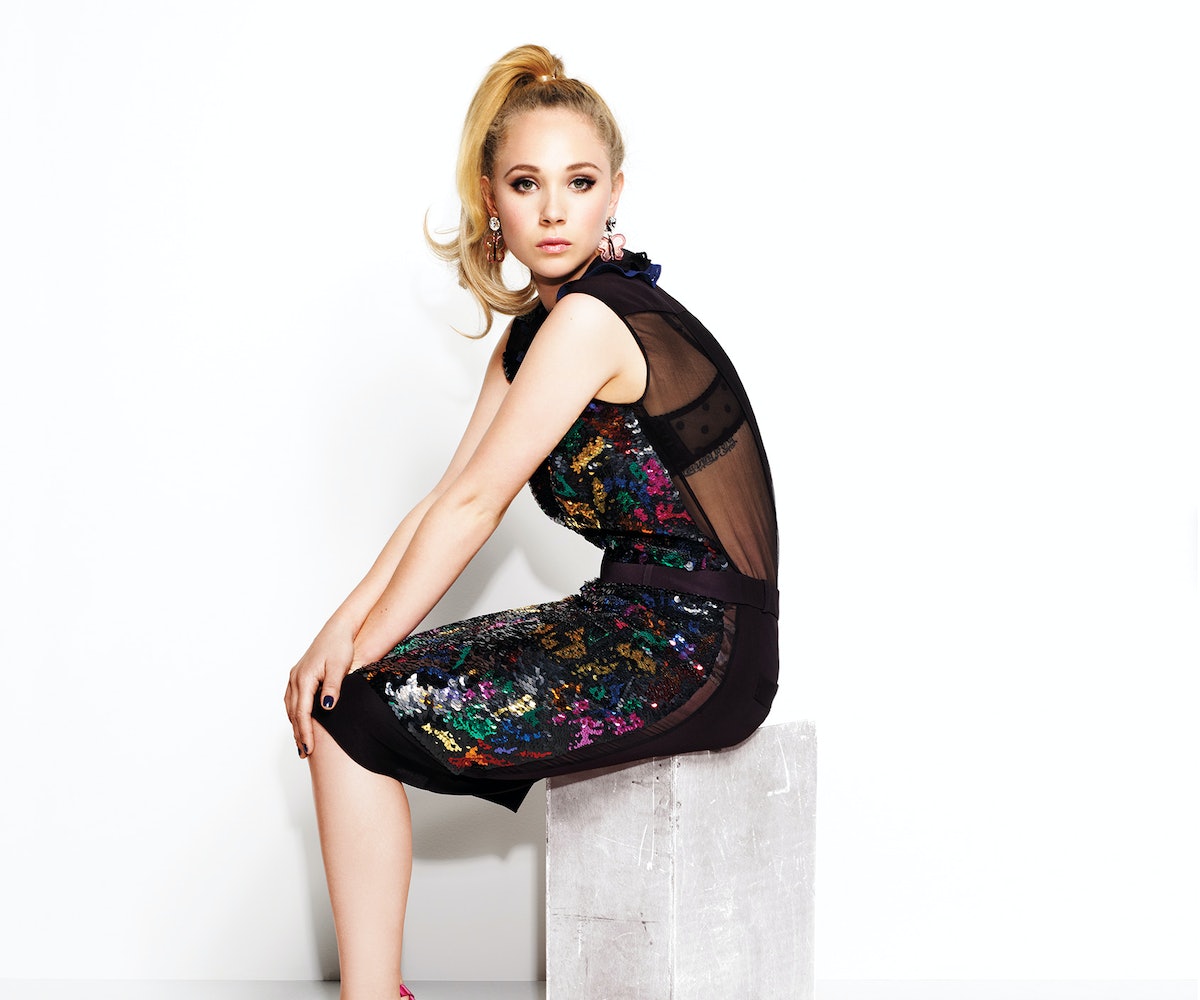 Though the premise may sound familiar--uptight mom loosens up after meeting a stripper with, if not a heart of gold, then at least a knack for dealing with sexually frustrated men and women--Afternoon Delight is hardly predictable. And that has a lot to do with Juno Temple; as the fun-loving dancer-slash-prostitute McKenna, Temple plays her in such a likable way that we don't think twice when she's invited to move into a hipster L.A. family's home. In a summer that has her appearing in bothLovelace and the aforementioned Jill Soloway-directed flick, and an upcoming schedule that includes Maleficent and Sin City: A Dame to Kill For, there's never been a better time for the British actress. NYLON chatted with Temple about doing research in strip clubs, working with Carey Mulligan, and wanting to go to school to make lingerie.

What's the prep work like on a film like Afternoon Delight, where you give a lap dance and work your magic in bed with a client?

This is so not the cliche stripper movie. Did the script read as really complex, or is that something that only emerged once you were shooting?

You know, it was instantaneous; I read that script and, especially as a woman, I thought it was very brave. It was really interesting playing this girl who's in a situation which, honestly, most girls in her situation aren't enjoying it the way she is. I thought that it was also interesting that everyone around her wants to rescue her, but she's not the one needing rescuing. I liked the idea of coming in and being this tornado inside the house and knocking on doors and making people open them.

Both Afternoon Delight and Lovelace deal with sexuality--specifically women's sexuality. Do you think it comes down to the fact that sex sells and makes for an interesting movie?

It's hard in the US because they're a little nervous about sex. I also feel like sex and sensuality are something that are really important to have in movies because it's part of life. Yeah, for sure, sex sells--it always has. When you look back at the '50s and it's Marilyn Monroe and she's the sexiest creature ever, but I think it's also important to be a part of projects that are about more than just sex.

What other projects do you have coming up that you're really stoked about?

There's Far From the Madding Crowd directed by Thomas Vinterberg starring Carey Mulligan--I've met her before, but I'm really excited to make a movie with her. I think she's an extraordinary talent. The film is based on this fantastical novel by Thomas Hardy and I play a tragic role.

At this point you've established yourself as a real force in young Hollywood; does it feel like what you're doing now is different from what you were doing when you first started?

Yeah, for sure. I've also noticed that I'm learning and learning from each job, so each time you take something from the last job and leave with a little more, it's crazy. You work and then there's down time, and you're sitting and all you want is the job, and then you get the job and you think, Fuck, all I want is the downtime! For me it's all about finding that next job that I can't wait to sink my teeth into. When I was younger I was more nervous about getting jobs--I'm probably tooting my own horn in a way that probably isn't true; I still panic, but I've come to appreciate the time that I have to myself. But it's a hard mix because you do get stir crazy.

What do you do during your down time in between films?

I draw, I paint, and I like to sew--I want to make my own lingerie!

That's pretty awesome! Have you always been into lingerie?

I mean, I have an amazing collection of vintage lingerie--a lot of '30s pieces and Victorian corsets and things. If I'm going to get lingerie I'm getting Agent Provocateur; it's the lingerie of the fashion world. If I ever get it together, I would love to go to school to build a corset. I hope I can do it one day!

How big is your collection?

I have a lot of Agent Provocateur [laughs]! I definitely have over 100-something sets. But I've been collecting since I was 16; it's something I'll wear under my baggy boy jeans and grubby T-shirt and no one knows about it!