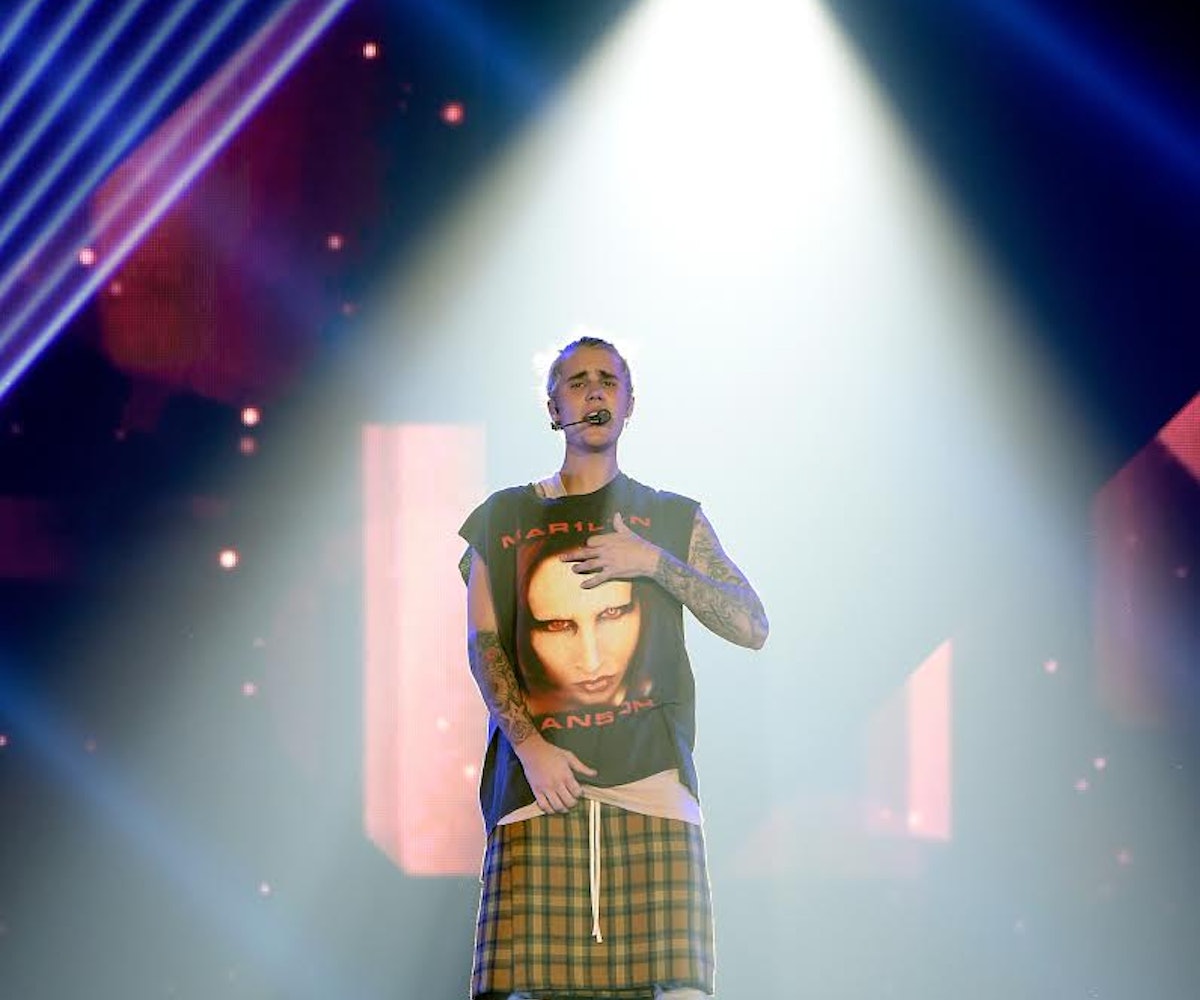 Justin Bieber is living his truth. Or, more specifically, he’s living his purpose (thank you), particularly since he’s using his current world tour to define himself through fashion—like only a 13-year-old could.

Having kicked off his tour in Seattle last week, the actually 22-year-old singer opened his arms and his closet to the rest of the world, having offered Billboard a behind-the-scenes look into his array of T-shirts, skirts, flannel, jeans, and more Fear of God shoes than any of us could possibly fathom.

Stylist Joan Welch (who’s working with Bieber on this tour) describes his vibe as “street grunge with a very vintage skater feel.” And I think that’s pretty accurate, minus the fact that most West Coast nineties-era skaters—or any skaters I knew growing up in Ontario, Canada—refrained from wearing Calvin Klein, Adidas, and Raf Simons. (Though they’d probably opt for the Marilyn Manson shirt, which is straight-up badass.)

So it’s easy for us to condemn Bieber’s embrace of an aesthetic he’s very far removed from. It’s easy for us to call him a poser, or to roll our eyes, or regale everyone willing to listen with tales of when our friends wore Manson shirts to middle school and got sent home because it was 1998. And it’s easier still because Bieber dresses so boldly. He’s the equivalent of our barely teen selves when we bought our first pair of Etnies and acted like this had always been our look. Only, instead of crumbling to insecurity, he’s wearing his pieces onstage in front of tens of thousands. Which means—contrary to what his occasional outbursts dictate—he doesn’t really care what we think about his clothes. Mainly because that when it comes to his wardrobe, Justin Bieber is the coolest eighth grader around.

And I know he’s 22. But lest we forget our own junior high formative years, where we were yet to be subjected to the harsh truths of the high school fashion hierarchy and before we found ourselves bending to the norms dictated by older trendsetters. In eighth grade, we were still brazen. We were teens, but not quite. We had confidence we wouldn’t end up finding again until college, and considering Bieber’s never been subjected to that particularly painful right of passage (read: traditional high school), we’re seeing the aesthetic prowess of a young man who’s fully confident in his ability to dress himself. And as he should be: his risks are exciting (10 points for that Nirvana shirt at the AMAs), he helped usher in the drop pants comeback, and now he’s fronting for Calvin Klein. He could probably teach us all a thing or two. If not about fashion, then about style confidence.

Which is arguably what he’s doing. By taking to that stage in skinny jeans, cutoff T-shirts, and plaid skirts, he’s not just experimenting for himself, he’s inviting his fans to do the same thing. He’s the cool teen in our own lives who encouraged us to layer, to mix and match, and just buy the Manson shirt already. (I still didn’t because I wasn’t allowed.) And he does so all while proving that you can ultimately wear what you want, when you want, and how you want, if you do so with enough confidence. And what makes his real-time evolution valid is that his clothes aren’t a costume, either.

In the same interview, Welch reveals she can see the looks changing depending on how Bieber chooses to style them.

“His approach to fashion has evolved the way his music has evolved,” she continued. “The approach is more chill, but he does take super-fun risks.”

So, he’s doing exactly what a 22-year-old pop star should do: figuring out what he likes. And while he may be playing into the current lust for nostalgia, we’ve all thrifted and shopped, and delved into the past for various reasons while learning how to express ourselves through clothing. (Or still do.) We don’t have to buy or wear the trends Biebs is currently championing, but we can certainly recognize his assertion of self-expression and commitment to being an individual.Plus, he’s appropriated a Satan-centric Manson shirt to apply to himself.

And if that’s not Cool Eighth Grader™ levels of irony, I don’t know what is. Also, if I want to buy it, this time, my parents can’t stop me.