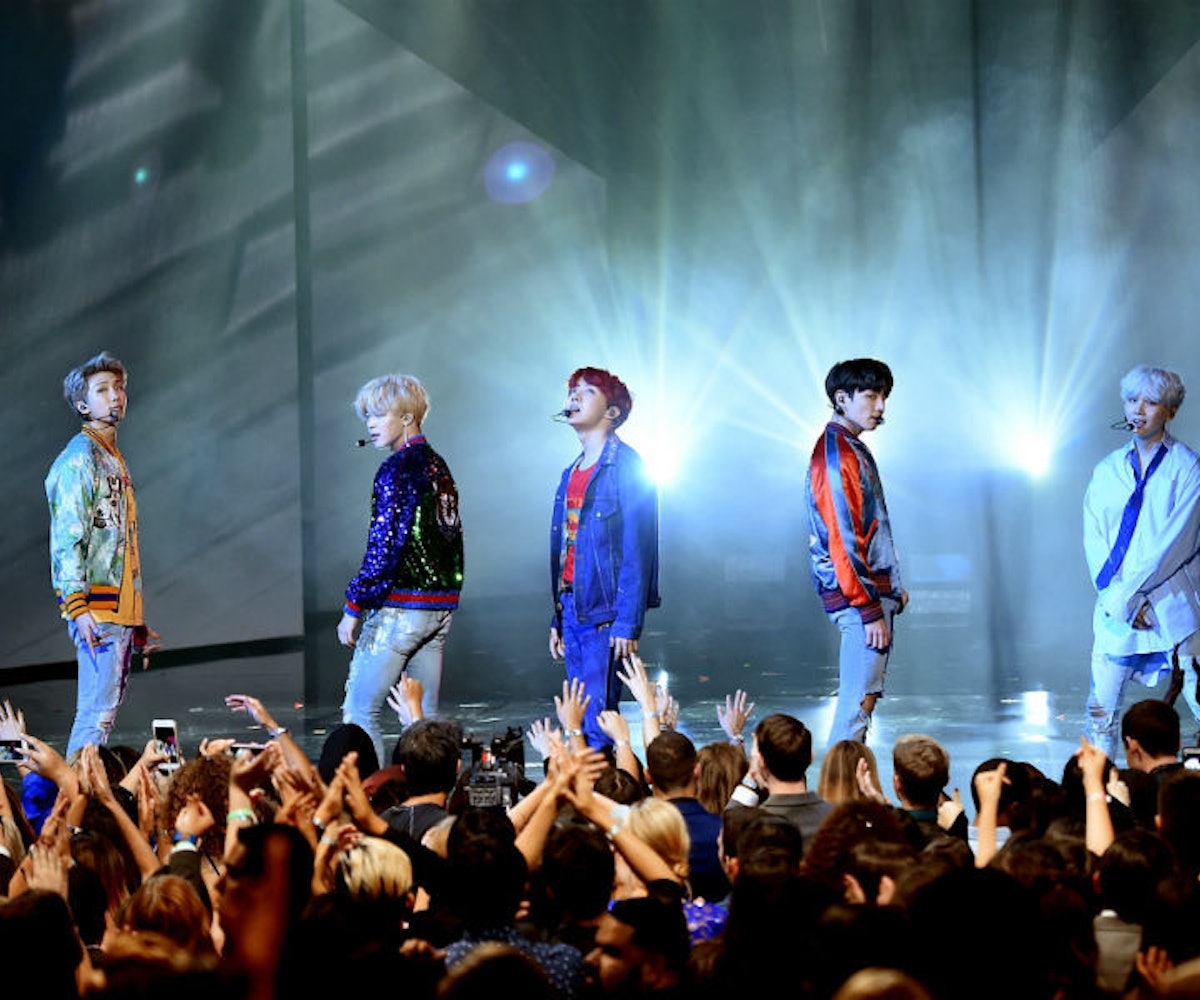 Vlogger Michael Smith-Grant first became interested in K-pop after watching KARA’s “Break It” video. He became a fan fan a couple of years later when he discovered more hip-hop leaning groups like B.A.P., a band which, Smith-Grant emphasizes, came before the wildly popular BTS.

Smith-Grant got a lot of shit originally for liking a genre that wasn’t authentically hip-hop and also wasn’t in English, he says. Which is why he started his own YouTube channel to dispel the myth that black people can’t be into K-pop. “A lot of people don’t understand half of the mumble rappers in the industry today or the lyrics to ‘Despacito,’ but did that really stop them from listening?” he asks. “A lot of people get really hung up on the fact that K-pop is a ‘thing’ today, when it's just pop music in Korean. You don’t judge a book by its cover, so you shouldn’t judge music by its language.”

But, you can judge music by the way it's presented, which Smith-Grant also understands. People—black people, in particular—have taken an issue with K-pop, thanks to some of the genre's artists engaging in problematic behavior.

What does “problematic” mean here? Well, it can mean extremely racist, like when recently K-pop band Mamamoo wore blackface to imitate Bruno Mars. (This is just one of the many instances where other K-pop artists have done the same.) Or it can mean engaging in inappropriate cultural appropriation, like rocking cornrows and grillz in music videos.

“Every genre of music has its set of problems—its Achilles' heel,” Smith-Grant says. “And for K-pop, that will always be with the issue of cultural appropriation.” Recognizing this, he decided to start Seoulwave, a “social entertainment company,” about four years ago with his friend Kayla Justiniani. Through videos, they address the many problems within the genre they adore and, as Justiniani says, “take the stance of being real and upfront about all issues in coordination with the music, and try to tackle issues on culture, as well.”

Justiniani first became interested in K-pop around seven years ago after staying with a family member who was into the genre. She had listened to bands like Wonder Girls and 2ne1 before, but once she heard a remix of a Lady Gaga song from the now-disbanded group Rainbow, she was hooked. There were a couple of things about the genre that held her interest: “My music taste has always been ‘worldly,'” she says. “I’m a big Brit-pop fan, I listen to Japanese pop and rock, Swedish, Spanish, anything that I connect to. So, K-pop is no different.” But it was also the production of the bands that kept her coming back. “You’ve got extremely good dancing and singing. Plus, I’m just a big girl group head, so it was like taking Girls Aloud and Danity Kane and adding slick moves and some pretty decent rapping.”

She, like Smith-Grant, doesn’t pretend to not see the problems that come with a lot of the artists.“The majority of music borrows from black culture, and a good chunk straight-up steals from it,” she says. “So, it’s kinda something you go into not being surprised that it’s happening.” That doesn't make it okay though. When approaching the topic, she makes a point to distinguish between appropriation and appreciation, an area upon which a lot of bands toe the line. “It can be problematic, and a lot of it is,” she says. "When you do things without sincerity and appreciation, things can get bad fast. I don’t categorize every little thing as appropriation, a lot of it can be labeled as ignorant. But if you continue to do the same thing over and over, then it’s appropriation.”

Speaking of ignorance, that’s what a lot of artists profess when they do receive flack for their offensive behavior. In Mamamoo’s apology, following the backlash of their performance, they write that they “were extremely ignorant of blackface" and that they “did not understand the implications of [their] actions.” This is understandable to a certain extent. South Korea is very much a racially homogenous country, and many artists aren’t familiar with the detailed racial and political history of America. “A lot of these artists have international dreams with their companies but no proper global representative to coach or prepare them for the different cultures of the world,” Smith-Grant explains.

And, of course, not all K-pop artists are guilty of this; most don't have this problematic behavior at all. “Just because some people refuse to learn and grow doesn’t mean there aren’t artists who take both the black culture and their own culture seriously,” Justianini explains. “There are artists that happily marry the two and make something worth consuming.”

But as K-pop continues to garner international attention, artists—and their managers—are going to have to be more cognizant of the images they put out there. Especially if they have any hopes of breaking into the American market. “The artist who attempts to crossover with appropriation in mind won’t break the barriers, they’ll be rejected—rightfully so,” Smith-Grant predicts. “There will be more artists and groups that will have success—like BTS, Wonder Girls, and Girls Generation—within the mainstream media.” He lists hip-hop and R&B artist Jay Park as another making waves. “If people can like ‘Despacito,’ which is a Spanish hit, then people can like ‘Drive’ by Jay Park. It’s not fair to group the entire genre based on the actions of a few.”

In the meantime, Justiniani says the best thing to do is keep calling out the artists who are being problematic. That’s the only way things are going to improve. “You can’t change things for the better if you keep allowing ignorance to prosper—you call it out, you keep the conversation going. You don’t see past it. You educate and help change happen. That way, we can all enjoy what we love on a better, more balanced level.”