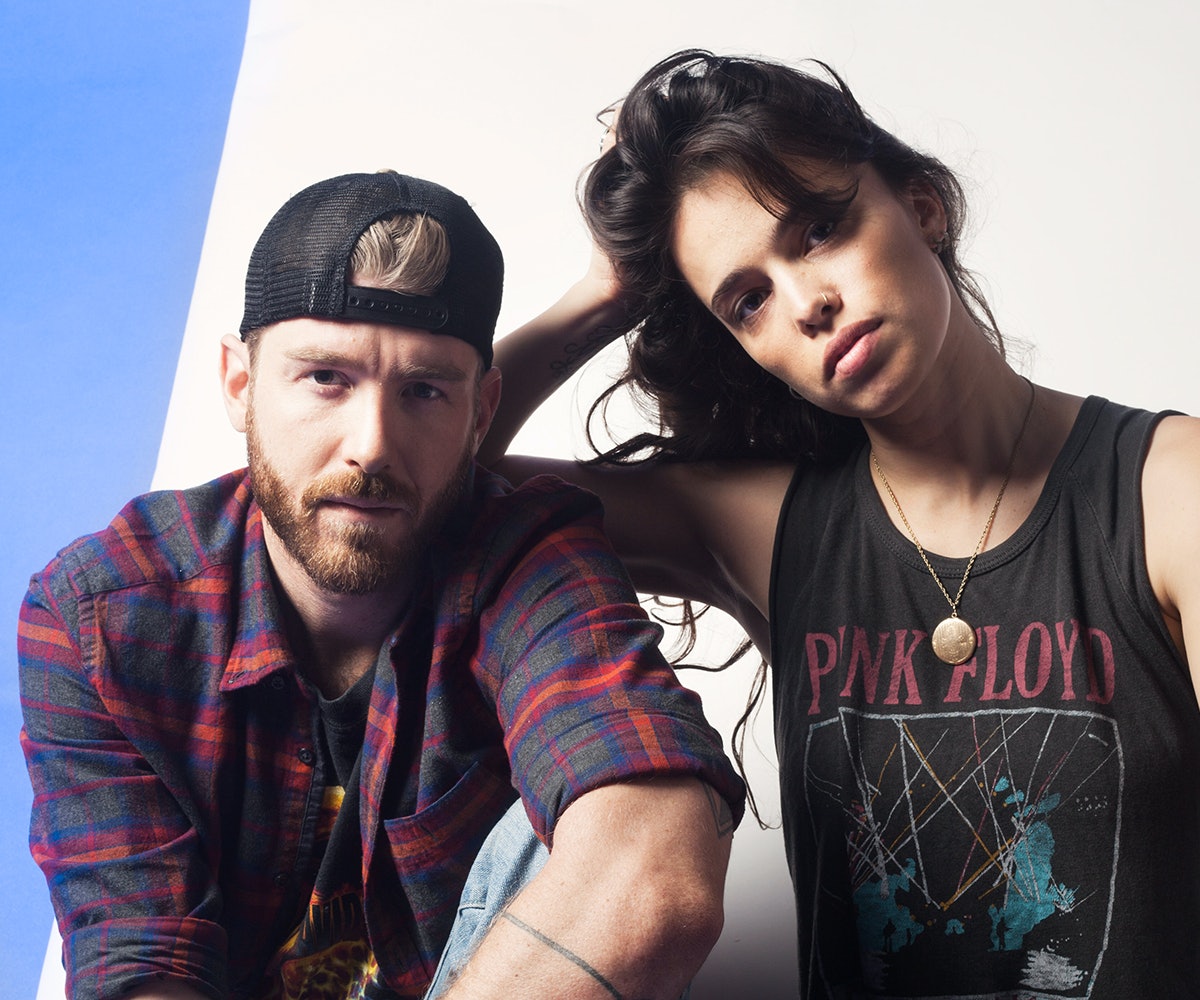 John Lennon and Yoko Ono, Britney and Justin, Jane Birkin and Serge Gainsbourg. When it comes to musical couples that we love, there’s always one thing we want to know about their relationship: everything. For a couple like Chelsea Tyler and Jon Foster, with such strong connections in the music industry (Steven Tyler is Chelsea’s father), you’d think sitting down to interview the duo might come with a bit of standoffishness, privacy, or secrecy. But in fact, when I sat down with the engaged couple who make soulful electronic jams under the band name, Kaneholler, I experienced the opposite.

The pair, who seem to have been brought together by fate (both romantically and musically) were down to share almost everything with me—from which songs they want to play at their wedding, to the fact that they read each other Shel Silverstein stories at night. With the third volume of their EP on its way, plus plans for touring (and getting married) Tyler and Foster were happy to share details of the whirlwind life they’ve already begun together.

What is it like being in a band with your significant other?

Jon: It was super effortless. We were introduced by a friend of ours. Probably within three days we were making music together.

Chelsea: The “working together” aspect and then the “being in a relationship” aspect help each other a lot, which I didn’t really expect. With making music there’s no bullshit. If you don’t like something you have to be able to be straight up, “I don’t like that or I’m not comfortable doing that.” You have to be real.

When you first met, did your friend hook you up because she thought you’d be a good couple or a good music duo?

Chelsea: It’s the last thing I expected to ever happen to me in my life, getting set up. Zoe Kravtiz is a mutual friend of ours. Her dad, Lenny, and my dad have been friends since I was a baby, so we spent a ton of time growing up together. It was the summer of 2011, I was in New York and ran into her. I went back to her place and we were just catching up. She was showing me pictures, and she showed me one, he was in it—and I was like, “Who is that?” Then she was like, "You should actually meet, that’s a great idea," and she brought us both to the same party.

Jon: It was more of an, “Oh, you guys should meet,” because I wasn’t doing music at the time.

Chelsea: I wasn’t either, I was in art school and doing modeling, and he was acting. Both of us wanted to do it, and it was something we cared about, but not something we were really taking seriously enough to do.

Jon: When we first met, we hung out. The next morning we went to brunch. We’re sitting there and I see on her hand that she’s got this tattoo. I’m like “You’ve got to be kidding me.” And I go [Jon puts out his hand, then Chelsea does; they have the same tattoo]. So, yeah, we got those like a year before meeting each other.

Do you know any of the songs you’re going to play at your wedding?

Chelsea: Ever since I was a little girl I was always really obsessed with “These Arms of Mine” by Otis Redding. I remember being a little girl being like [in a little girl voice] “Some day I am going to dance with my husband at our wedding to this song.” Otis Redding, Sam Cook, and then get to the end of the night and put on “Fame” by David Bowie and dance weird, The Talking Heads.

What are three records in your shared record collection?

Chelsea: I’d have to put The Miseducation of Lauryn Hill, it is my favorite record of all time, so that’s gotta go in there.

Jon: And if I was going to put one, I’d say old jazz, like Ella Fitzgerald.

Chelsea: But I feel like for the balance of it should be a DJ Shadow record or something.

Chelsea: Get some electronic sounds in there.

Jon: We really go between electronic music and old jazz. That’s why it’s really influenced the music that we’ve been making. Although we did set out to make that genre, which was, "I love electronic music, she loves old Jazz." We hadn’t heard a real mash-up of the two where you can go dance your ass off but still have a lot of soul implemented into it.

What was the reasoning behind putting your album out in three volumes?

Chelsea: When we first started, we were just kind of experimenting. Then, in the first two years we started realizing that we really liked dance music for performing. The second you play live you just want to make people move.

Jon: When you’re on stage and you play that song that gets everybody really sweaty, you’re like, “All I want to do is make people do that.” We realized we couldn’t put all three styles in one album because people would be like, “What kind of music do you make?” So we wanted to show the progression over the three years of movement from minimal to a little dance-y to really dance-y.

Since your touring van could potentially be your new apartment on wheels, what are you going to bring from your shared apartment to your tour bus?

Chelsea: The first thing that comes into mind is the little JBL Speaker thing that’s so awesome that we bring everywhere with us.

Jon: I’d say our animal onesies. They’re just great. We’re told not to bring socks, but to buy them and throw them out on tour. So we won’t be bringing socks and underwear.

Chelsea: Which isn’t new for you, because you don’t anyway.

Chelsea: It’s convenient, though, because the kind of music we make, we don’t have to bring around these big guitar cases and amps. We have two road cases and everything goes in there. The biggest thing is this DJ booth-style table that is made of old wooden apple crates.

Chelsea, what is Jon’s favorite TV show of all time?

Chelsea: The first one that’s coming to my mind is The Leftovers.

Jon: But you know it’s something on Discovery Channel or National Geographic.

Jon, how does Chelsea take her coffee in the morning?

Jon: She takes it just like I take it, with that Coffee-Mate vanilla cream. It’s like crack in our house. We make our coffee not see-through, it has to be like syrup, thick, dark. We call it “jet fuel” and usually pound a whole pot of that before we get to work making big beats—our neighbors hate us for it.