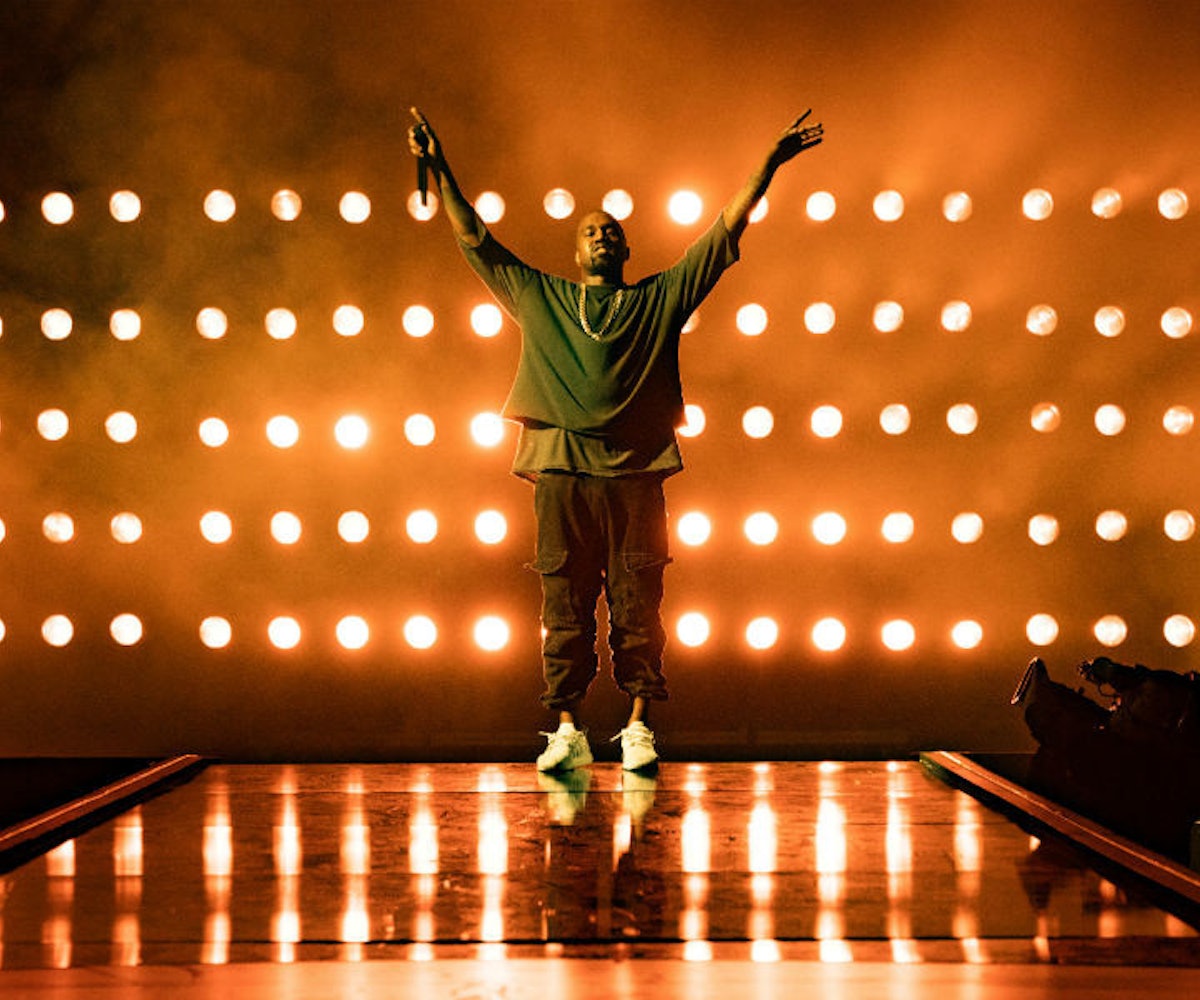 “Do you think slavery was a choice?” I texted my friend a month ago, suddenly unsure of who I could trust to not hold dangerous opinions anymore.

“I can’t with this man,” he responded, and I let out a sigh of relief. My friend continued, “I used to look up to him, now I’m lost.”

“Yeah, we lost a hero,” he typed out, quickly followed by: “Anyway, how was Mexico?”

Deflecting is something us Kanye West fans have mastered over the years. Changing the topic to anything other than his latest asinine antics. To be a West fan is to be constantly exhausted, and these past few years have been particularly trying.

It started in November of 2016 when West announced that he didn’t vote but, if he had, he would’ve voted for Donald Trump. A month later, the rapper met with the then-president-elect to discuss “multicultural issues,” like “bullying, supporting teachers, modernizing curriculums, and violence in Chicago.” Fast-forward to April 2018, and West started again professing his love not only for Trump but also for Trump supporters like Candace Owens; this is also when he began to make claims that slavery was a choice. West—the son of a Black Panther and a black professor—who once claimed to be for us by us, was now preaching a different story, and fans were left to grapple with what felt like a seismic betrayal.

Some are quick to point out that West has always been controversial, and that's long been part of his allure. Wilson, a 23-year-old software developer, points to Hurricane Katrina and the Taylor Swift “Imma let you finish” moments, saying, “He's known for being egotistical, causing a scene, and making comments out from left field." Bonnie Kong, who considers herself an 8.5 out of 10 on the West fandom scale, agrees that this behavior isn’t anything new; it's just another instance of Kanye being Kanye. She also thinks his antics are a publicity stunt for his new project. “In today’s celebrity-obsessed world, where his audience is glued to social media, Kanye expected the attention he was going to get on Twitter,” she says. Kim Frole, a self-declared “Kanye apologist,” thinks it’s a part of some New Age West performance art. “He's referencing Joseph Beuys, Andy Kaufman, and David Hammons in his tweets, all respected artists pushing the boundaries of art and societal norms,” she says, pointing to Twitter user @snowcone965’s conspiracy theory thread.

But, where do we draw the line when it comes to pushing the boundaries of art and pushing dangerous rhetoric, essentially endorsing talking points of an equally dangerous administration? West’s comments about Katrina are memorable because he was sticking up for the neglected black people of New Orleans—in a jarring and very West-ian way. His Swift interruption was rude, sure, and he probably would’ve gotten a lot more shit for it had it happened today with the ubiquity of social media, but, hey, his words were also in defense of Beyoncé, so it's hard to hate on them completely. But West’s recent remarks are a lot more polarizing and have serious consequences. As Ta-Nehisi Coates put it in his piece for The Atlantic: “West’s thoughts are not original… They are the propaganda that justifies voter suppression, and feeds police brutality, and minimizes the murder of Heather Heyer. And Kanye West is now a mouthpiece for it.”

Which brings us to the impossible-to-answer question: Can and should you separate art from artist? Or, as my colleague Hafeezah Nazim puts it: “What price do you put on morality?” For West fans, that price seems to be pretty low. “For me, Kanye the rapper and producer is separate from Kanye the person who talks brazy on social media and in interviews,” explains journalist Jeremy Schneider. “If they ever intertwine, then my fandom will wane.”

Frole sees it like this: There are a bunch of other people who have positively contributed to society but have also said and done terrible things. She explains:

Do I think R. Kelly is a vile human being and what he's subjected these young women to in his Pied Piper sex cult is absolutely illegal, manipulative, disgusting and inhumane? Yes, but, I'm sorry, when "Step in the Name of Love" comes on… we're all dancing. Picasso was a well-known misogynist, [Richard] Wagner an anti-Semite. If they committed a crime, yes, definitely lock them up, but if they release art, it's up to the audience to make a personal decision whether they want to consume it or not.

When I ask all six West fans whether or not they’ll be listening to his new album, which comes out today, I get a unanimous yes. They want to hear what genius he’s been cooking up in Wyoming. They still love his music, his masterful production work, the tracks he samples, and the musicians he collaborates with. “It’s new Kanye, ya know?” Wandera Hussein says, the question already answered.

As for what it would take for the rapper to alienate his fans—at least the ones I surveyed—for good? “Something vile, like sexually, verbally, physically abusing children or women,” Hussein says. “If he runs alongside Trump,” Amber Bryant offers up. “Nothing,” Frole says bluntly. “Even when I hate him, I love him.”