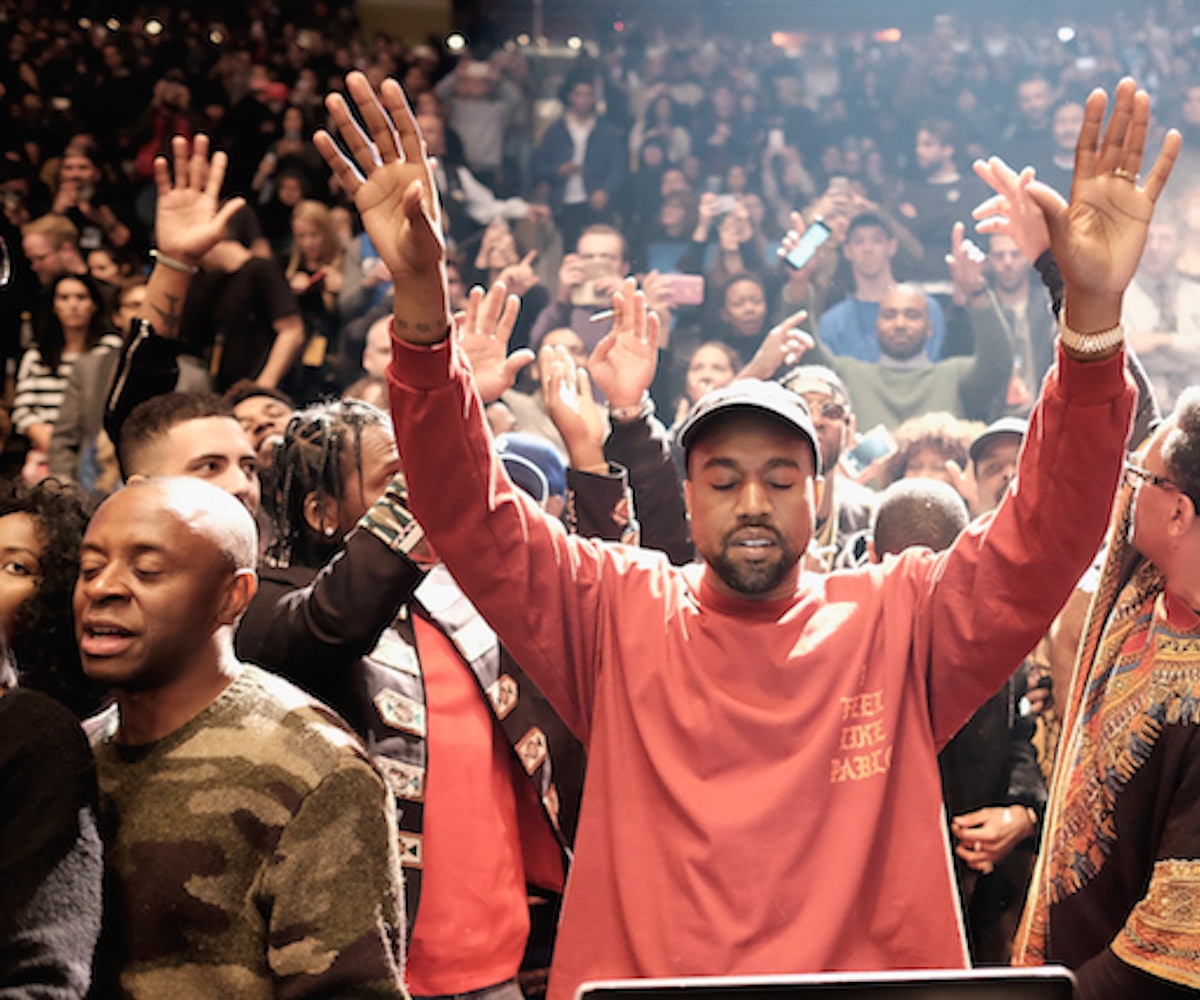 The media's portrayal of West as an "angry black man" who is "in love with himself" is unfair, problematic, and ignores the fact that West's anger stems from his position as being an underdog throughout his very critically acclaimed career. He's from the Second City (which is truly the third or fourth city for rap). He's never been a "thug" in a world that values street cred (Pablo finds West lamenting the dangers of texting and driving, which is valuable…but not very "hard"). He was making backpack music at the height of 50 Cent; served up sentimental, soul-wrenching electro to his then-established hip-hop only audience in 808s. Currently, he's setting himself up as a fashion designer in a world that is sadly suspicious of black people and celebrity.

This is Kanye West. This is his duality. His new album, The Life of Pablo, sees the truest battle between these two sides of himself, between the two narratives he has actively told simultaneously. (For those of you who put credence in this sort of thing, West is a Gemini, that sign of the twins and the eternal battle of yin vs. yang. No surprise there.)

But West isn't an underdog anymore. Like his ideological opposite, Taylor Swift, he's turned his underdog-ness into being rap's standard-bearer. It's a place he got to by dethroning (pun intended) the consistently-at-80-percent output of Jay Z. Where HOVA crooned and leaned back, West flew high and went all out. Now a certified king approaching his 40s with seven albums under his belt, messy, scrappy Kanye West doesn't have the same appeal it did during, say, 808s.

So, what about Pablo? It indeed has the staggering, expansive sonic breadth and messianic vision its creator advertised. West harnesses religious imagery, evoking prayer in the gorgeous opener "Ultralight Beam" (as he did in "Jesus Walks" so long ago). And yet, Pablo is horribly hampered by being, well, petty and frivolous. The most newsworthy example of this is West's decision to call out Taylor Swift in "Famous". Here, he doesn't use Swift as a representative of sanctioned, "acceptable" white media. Nor is this an extension of some sort of unsettled beef. Rather, it's just a line spat to create drama—trouble for trouble's sake. (Rihanna is wasted on "Famous". Remember, the last time she appeared on a West album? "All Of The Lights" was incredible.) Taking a weird sharp turn with a Lady Saw sample that feels out of place, "Famous" is bloated.

The kind of misogyny West threw at Swift isn't new. Rap and misogyny have had a close, problematic relationship, and the first half of Pablo is particularly saturated. Truly troubling lines—including a shout out to Ray J that insinuates West's own wife, Kim Kardashian, could be bought—are everywhere. Here, big-bootied women are objects to be handed out like furs and cars.

It doesn't work here (not that we're suggesting that women-as-objects works anywhere). But especially so; West has no reason to set himself up as a lothario, there's no benefit to flexing his pimp cred. Flash back to the pre-Kim Watch The Throne where Kanye had equally problematic lines, but continued to remind the listener that he was a lost, bewildered sex addict who was figuring out his own issues with monogamy. None of that introspection appears in these early tracks.

Similarly, a song like "Highlights" just feels out of place (aside: out-of-placeness is this album's truest negative), with an auto-tuned chorus repeating the vapid, "I need every bad bitch up in Equinox/I wanna know right now if you're a freak or not." West then, for some reason, alludes to some Us Weekly-style gossip, referencing the relationship between Blac Chyna and Rob Kardashian. The two names feel distinctly clunky on such a supposedly ambitious album. Speaking of his relationship with the latter and his kin, it seems that Kanye embraces and battles the tabloid culture of which he is now such a critical part. To quote Kanye himself, "I don't even want to talk about it/I don't even wanna say nothin'/Everybody gonna say somethin'/I'd be worried if they say nothin'." And here is the conundrum of Kanye: Do you want to say something, or don't you? You can try to do both, but the message will come out jumbled.

West’s capacity for evolution is staggering, both personally and politically. This is a man who publicly apologizes for his feuds, who very notoriously seeks out experts in relevant fields to help him hone the many skills her pursues, who has stayed relevant by seeking out and working with some of the brightest young things in music, fashion, and art. More than that, he’s aware of his own complicated presence in culture. In “I Love Kanye”—formerly titled, “I Miss The Old Kanye”—he cheekily plays the roles of Kanye West, as well as Kanye fan, and Kanye critic, jovially closing by quoting the meme, “I love you like Kanye loves Kanye.” It’s a smart, self-aware move that makes the low blows of “Famous” and “Highlights” seem all the more disappointing.

In other words, Kanye, you know better. You can be better. (Cue the Tyra GIF.)

Don’t get it twisted, of course. This is Kanye West here, and there is a reason he has become an institution (and it’s not just because he is Mr. Kim Kardashian). The sparse honesty of “FML” evokes the raw, vulnerable, visionary effort of My Beautiful Dark Twisted Fantasy. Here you witness a man stare into a mirror and both challenge and berate himself. (The Weeknd takes over singing duties from Kanye, which is a relief, as his penchant for autotune is in full effect.) It’s an incredible song, and it changes the tone of the album.

In fact, the latter half of the album is what Pablo needed to be. “Waves” (despite the Chris Brown appearance),”FML”, “Wolves” (which he is currently “fixing”), “30 Hours”, and “No More Parties In LA” (with its College Dropout-style Madlib beats) are all reminders of what happens when Kanye doesn’t let Kanye get in the way of Kanye being Kanye.

And that there is the real crux of this album. There is no one more capable, adept, and willing to sabotage Kanye West than Kanye West. When West drops his guard and lets you in to witness this battle of id and ego is when Pablo fulfills its ambitious promise. But, in true Kanye form, he wants this album to be too many things. In the end, it feels like the anti-Yeezus, an album that was sharply edited and entirely dense. With Pablo, the contradiction is pretty simple: Here is a 38-year-old father of two, looking back on a truly inspiring body of work, asking questions about legacy, about fatherhood, and about God and religion…who also wants so very badly to be liked and embraced by the rich white culture he rails against. It feels as if one is listening to a prisoner who is trapped in a cage he created for himself.

But, as Kanye West—the inimitable name that we won’t stop saying any time soon—says in “Feedback,” “I can’t let these people play me. Name one genius that ain’t crazy.”

NEXT UP
Fashion
Kanye West & Gap Have Officially Broken Up
Entertainment
Shania Twain's "Waking Up Dreaming" & 9 Other New Songs Out This Week
Entertainment
Who Will Rihanna Bring To The Super Bowl?
Entertainment
Netflix's 'Dahmer' Criticized By Victim's Families