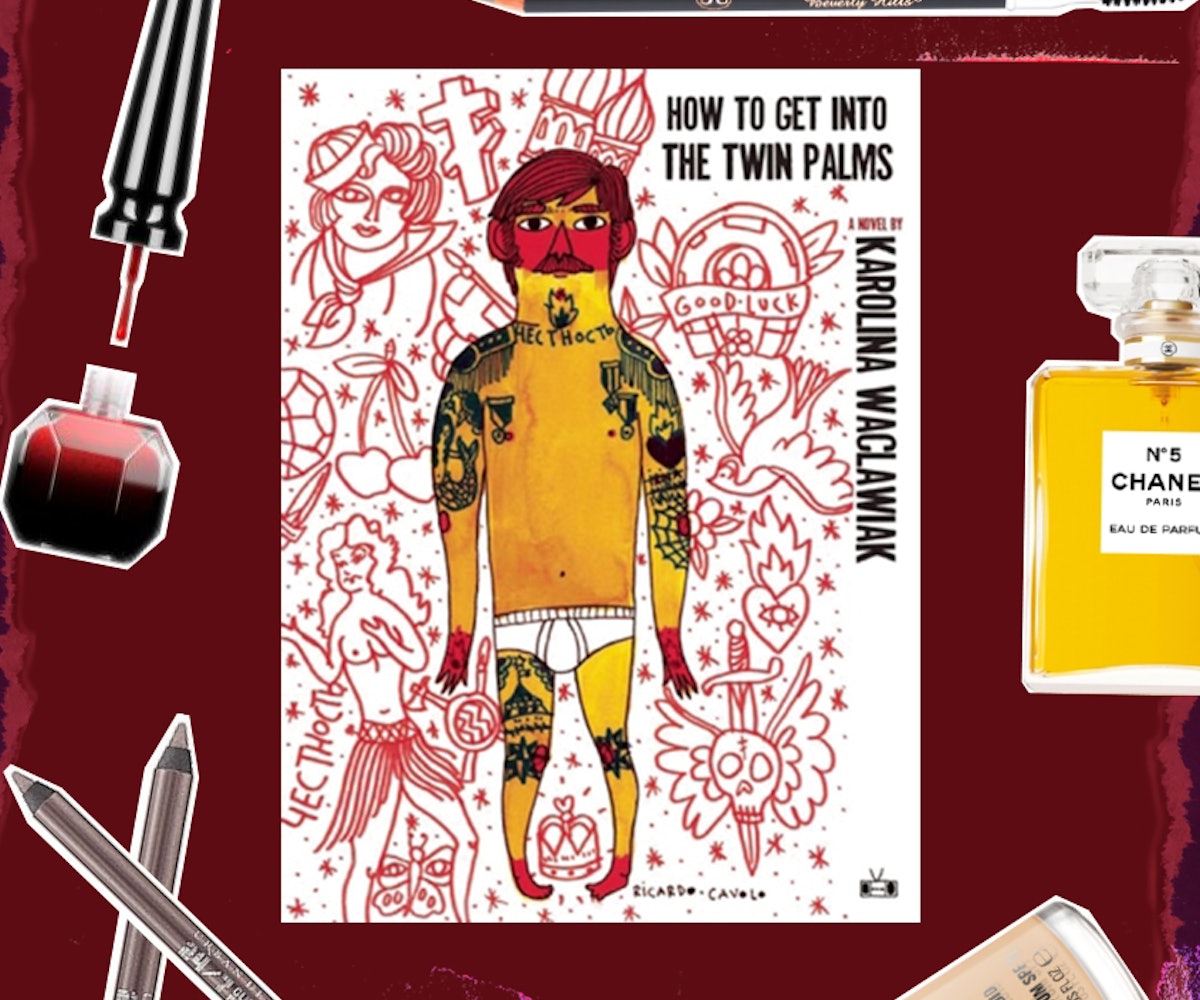 Whether you spent months searching for the perfect finishing powder and whisper-pink blush to mimic the delicate beauty of a Jane Austen heroine, or your first blood-red lipstick purchase was influenced by Snow White herself, if you’re anything like us, your beauty icons were the ladies of literature. Welcome to Beauty and the Book, the marriage of our two obsessions, where each time we showcase a new, amazing book and show you how to get the leading look.

This time we’re looking northwest, to a quiet immigrant neighborhood in (literally) blazing Los Angeles, where 25-year-old Polish girl Anya, underemployed and underjoyed, just wants to figure out one thing: How to look Russian enough to get into the Twin Palms.

How To Get Into The Twin Palms, Karolina Waclawiak’s razor-sharp debut novel, is not your typical L.A. story, or immigrant story. Rooftop coke binges and the tragicomic hollowness of the crazy/beautiful are replaced by the scent of simmering onions and discount store cleaner, retiree bingo, and corner-store carrot cake, dustings of ash on motel pool water. And unlike the archetypal immigrant protagonist, Anya wants the opposite of passing for American. She wants to be Russian, “Soviet-built and dooming,” to shed her ill-formed identity and project a new, powerful one she never got the chance to develop—and hopefully, do it well enough to be granted access to the exclusive nightclub.

But getting into the Twin Palms is not so easy. No one gets in unless they’re in already. Night after night, she studies the women going in and out in their furs and stilettos. She takes up smoking, buys some push-up bras, and dyes her blonde hair dark in an attempt to emulate their specific brand of gritty elegance. Eventually, she attracts the attention of Lev, an already-married Russian gangster who represents neither a future she craves, a past she misses, nor a present that can sustain her—a bad idea all in all, but a ticket to the Twin Palms, nonetheless.

Visceral and strong in its simplicity, How To Get Into The Twin Palms is a book that is not so much read as it is felt, and nothing is felt in quite the same way as the presence of the women Anya studies for inspiration. Ferocious in their glamour and built for winter (fur coats in California, anyone?), the ladies of the Twin Palms are no strangers to excess. Below are seven products to help you get Russian-ready, so all you need is a vodka shot and a designer bag to carry them all in.

Cleverly overlining the mouth is a trick of the trade, a fact known and shown by Russian women long before Kylie Jenner came into existence. Contrary to American belief, the ring is something to be embraced, not feared. Rimmel 1000 Kisses Lipliner in Black Tulip is a warm, vampy shade of plum that won’t budge even when your lipstick does, perfect for both nights out and mornings after.

As founder Anastasia Soare of Anastasia Beverly Hills knows, “Beauty begins with brows,” and this one-stick wonder is here to help. With a blendable, pigmented pencil on one end and a finishing brush on the other, you can use a little to beef up the brows you were born with, or draw full throttle to create the dark, heaven-high arches that would make Black Widow proud.

Russian women are no strangers to cold weather and are well acquainted with the drying effects of winter, so it’s no surprise that a thick, rich moisturizer is their BFF. The quintessential cold cream—your mother probably has one—Nivea is effective, affordable, and compact for the clutch. Oh, and super cute in its old-school tin.

Luxury price tag, practical product: This firetruck-red hue is inspired by the sought-after soles and housed in a bottle that doubles as weapon and objet d’art. It just doesn’t get more Russian than that.

The natural look is not en vogue in Mother Russia. Luckily, this breathable, matte foundation imparts seamless buildable coverage, so you can go from day face to doll face with little more than a flick of the wrist.

“It’s something about the eyes,” say those who can’t quite put their finger on that elusive element of Eastern Bloc beauty. And it’s true: Slavic women are owners of some of the most mesmerizing eyes in the world. That element of mystery is partly due to smoke, and not just cigarettes—a cool, smoky taupe underneath the lower lashes adds instant depth, dimension, and drama.

A ubiquitous fragrance of the Russian woman if there ever was one. With an inimitable blend of jasmine, sandalwood, neroli, and a healthy dose of aldehydes, this fragrance exudes seduction, sophistication, and status. After all, it’s not an icon for nothing.