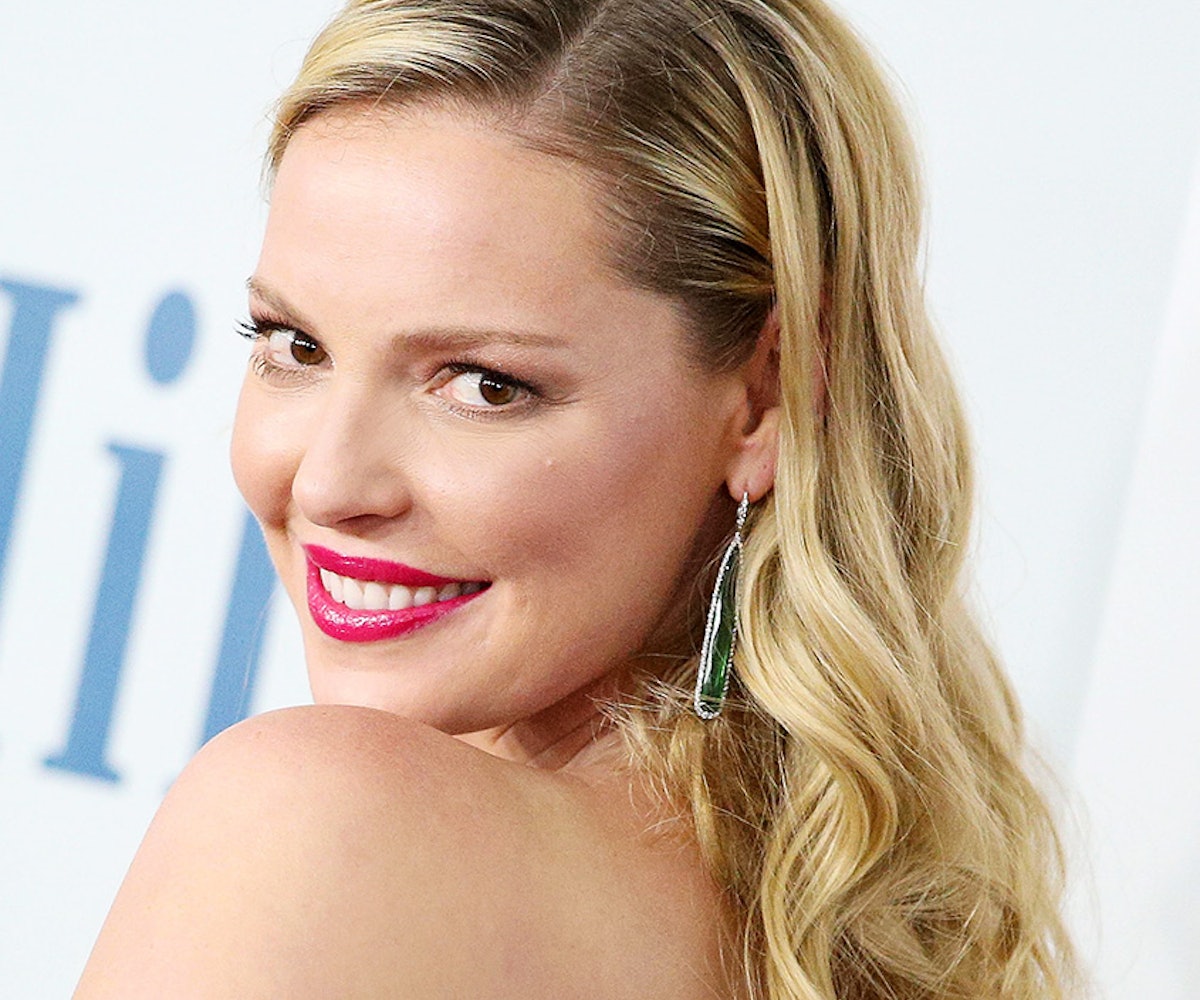 While Katherine Heigl may be married to an accomplished singer/songwriter, she is showing off her singing chops for the first time ever (having left Grey's Anatomy before its 2011 musical episode). Playing a small town-living former country singer in her new film, Jackie & Ryan, the State of Affairs actress has taken on a subtle yet heartfelt project that's made all the more poignant by a stellar soundtrack. Not unlike the 2007 movie-musical Once, the film tells the story of two musicians and the difficulties that arise along their unexpectedly crossed paths—and the songs that bring them together in multiple ways.

We talked to Heigl about her singing debut, Utah, and her love for Taylor Swift.

Your character is a former country star—do you have a musical background?

No, not at all, but I married a musician so I’ve spent the last 10 years being fully immersed in country music and singer/songwriter music and acoustic and every genre. My husband is exceedingly talented and really good at what he does and has an extraordinary voice. I’m not even saying that because I’m married to him—he really does. I’ve been getting more and more comfortable over the years singing along with him, learning a little bit, and just getting a bit bolder.

Oh, thanks! We were going for a vibe. I don’t have an angelic voice, so it was kind of like, how about we throw a Janis Joplin growly thing in there, which I couldn’t really do either, but you know. The idea was to be unique and in-key, but not trying to hit the high notes.

Do you ever sing in the shower or the car?

I do. All the time. And I feel like in those moments I’m actually pretty decent, but it could be one of those American Idol situations where I think I sound great but the judges think otherwise.

Who are your favorite artists to sing?

I’ve been so into Taylor Swift lately. We just sing that lately, the girls and I—my daughters sing that all the time, to the point where now we might have to take a break. And then I sing a lot of Josh’s stuff as well, because I know it so well and I’m so invested in it, so it’s really fun for me to sing. There’s this band that I discovered that I love so much called First Aid Kit. They’re incredible, and I play them full blast and sing at the top of my lungs.

Were there any specific artists that you listened to for this role?

I did. I put together an iTunes radio playlist with the title of Joni Mitchell. Anything that would come up—it was Janis Joplin and Joni and Joan Baez. All these kind of rocky, folky, acoustic-y singer/songwriters that would come up, and I would just try to gleam something from their style, their presence, their emotion. I would listen to that on my drive. We filmed in Utah, but we filmed about an hour and fifteen minutes away from where I live and I would listen to that the whole way in and the whole way back.

And you play a tiny bit of guitar in the film—do you play any instruments?

I was supposed to be able to play the cello. My parents, the jerks they are, made me take the cello but whatever, I wanted to play the violin. Like, “No, take the biggest, most cumbersome, most annoying instrument to travel to school with.” So from fifth grade through high school I played the cello and took private lessons, but never practiced at home. My orchestra teacher was super cool. I’d ask him if I could skip class and he would let me. So I never really properly learned enough, and when we had concerts I was second row and I would sit behind the first chair and mimic everything she did without really touching my bow to the strings. My parents thought I was so brilliant, but I was faking it the whole time. So I don’t play any instruments, but I’m really good at faking it.

If you could play any instrument, which instrument would you want to play?

I think the guitar. If I could play the guitar, I’d love to. I tried for this and my husband was teaching me. I played for 10, 20 minutes everyday, the chords for this one particular song and it just kills your fingers if you haven’t built those calluses up yet. I just punked out because I’m a baby.

You said that you live pretty close by to where you were filming. How long have you been in Utah?

We started building the house in 2007 and we moved in officially 2009. It took a while. It was supposed to be a vacation property, somewhere we could go to for a long weekend or a week during the holidays, but we just started spending more and more time there, to the point where we were never in LA. We had a home in LA where we spent one month of the year in and finally Josh just said, “Look, I think we should sell the house in LA and just become residents here.” So we did.

Do you consider yourself more of a country girl than a city girl?

I do now. Though I love the best of both worlds. I love being in the country more, like I can spend more time there than I can in the city. But I love to work in New York. I love to visit New York. I love coming to LA for work and pleasure. So I don’t know if I can hole up there forever, but I definitely can get six, eight, 10, 12 months and never leave.

What initially drew you to Utah?

I’ve always wanted to have a home in the mountains, and when it started to look like there was a possibility that that could be a reality, my mother as well, we started looking around. We went up to Mammoth [California] and looked there and thought about Colorado. We visited Utah and drove around Park City and looked at property around those areas. It’s beautiful. There are much bigger parcels of land to buy, and it’s easy to get in and out of LA, which is where most of my work is based out of.

Is there anything specific you like doing there? Are you outdoors a lot?

It is a very outdoors-y, active place. You always see people, whatever season, mountain biking, running, skiing, snowshoeing, cross-country skiing. I’m not a very athletic person to be honest, but I do love to ski. I love to horseback ride. I have a horse ranch and I have horses and a beautiful barn, so a lot of horseback riding. We don’t hike as much, but we do a lot of trail rides and we love to snowshoe. My mom lives about a little less than a mile away from us, around the mountain, so we’ll snowshoe from our house to her house. It’s a little painfully hard to do. I don’t know why we do it, but I guess just because once we get to her house, she’ll make us hot toddies.

Since the film is, in some ways, about traveling and going new places, what’s a place that’s currently on your travel bucket list?

I would love to go to Fiji. Someone was talking about it recently and it just sounds so incredible and amazing. I’ve never been. I’m honestly kind of a shitty traveler—I hate airports. I’m much better than I was, but I’m a pretty fearful flyer. The idea of that 16-hour flight boggles my mind, but if I could suck it all up, that’s where I’d want to go.