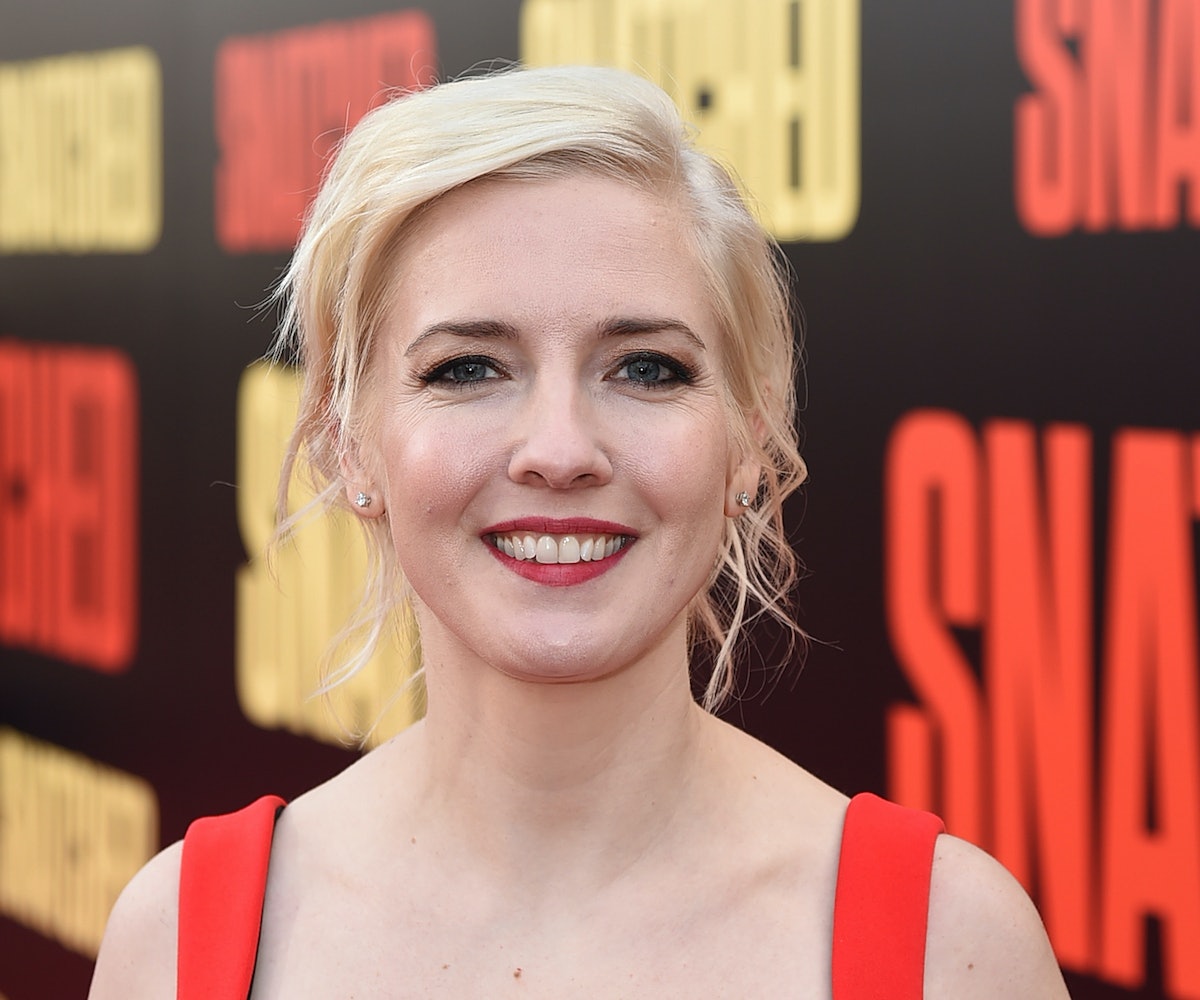 Wherever you find women muscling their way to the lead of a studio-fronted comedy vehicle, Katie Dippold won’t be far behind. After cutting her teeth in the Parks and Recreation writers’ room, Dippold claimed her first feature script credit with The Heat and, in the process, established a fruitful relationship with director Paul Feig and star Melissa McCarthy. Dippold took a small on-screen role in his next film, Spy, and then shared the “written by” distinction with him on last summer’s Ghostbusters reboot. For her latest big-screen project, Dippold swapped usual suspect McCarthy out for another unapologetic empress of laughs; Amy Schumer headlines Snatched as Emily, a feckless 30-something whose South American vacation with her mother Linda (Goldie Hawn, making a rare starring appearance) goes south when they’re kidnapped.

Dippold never had to live through an armed abduction or a tapeworm, but the affectionate bickering between the two leads comes right from her and her own mother. She took a moment to chat with us about the vital importance of living life to the fullest in middle age, mitigating cross-cultural tensions, and the inside joke she smuggled into the final cut.

You loosely based the script for Snatched on your relationship with your mother. How much of you made it into the character of Emily?

I didn’t make it me, exactly, because she needs to be in clearer contrast to the mom. But yeah, when I was in my 20s, I had a temp job. I was the worst temp in the entire world, and I had this job for three and a half years. I’d show up late, and then I had this trick where I’d put my bag in an empty cubicle, and then walk into the kitchen to get myself a cup of coffee, then walk back to my cubicle like I had just gotten up to stretch after being there an hour. I was the worst! Parts of her I definitely relate to, but I envisioned her as more of a trainwreck. I wrote this before Amy did Trainwreck, by the way. So when she came onto the project, and they didn’t want it to be too much like Trainwreck, they had to scale back the drinking. We also wanted to customize her for Amy’s voice, so the role was really tailor-fit to her.

Why does that quality of dysfunction always seem to translate to comedy? What do we find so funny about people who can’t get their shit together?

I always find it fun seeing someone try for the first time. So, the further they are from that, the better. So many of my favorite movies are about screw-ups. I find it refreshing in this moment of time to see a woman be allowed to do that, too, instead of being the annoyed girlfriend.

How would you characterize your relationship with your mother?

When I was a kid, my mom was always really adventurous. She was fun, she’d have prank wars with the neighbors. One time she put aluminum foil on the back of their car so they thought it had been hit. She always made ridiculous Halloween costumes for herself. Of all her friends, she was the boldest one, she was the one driving everyone into the city. But then after my parents got divorced, and it was a friendly divorce while I was away at college, I noticed her change a bit. She became more cautious and cynical. It was like she was expecting disappointment. That’s something that happens a lot, and it was hard to watch.

We eventually got her to sign up for eHarmony, which she didn’t want to do at all. And she told us it didn’t work, and we wondered why, so we looked at her profile. It was the most phoned-in profile I’ve ever seen. It was tough to watch that change, and so this was a sort of wish fulfillment, imagining what kind of trip I could take her on to shake that out of her. I am gonna take her to Amsterdam this year for real, though.

Have you had the talk about smoking pot, and whether your mom plans on being cool?

I haven’t brought that up yet, but it absolutely must happen. It’s got to. The only problem is that whenever I’ve smoked, I’m the most paranoid person you’ll meet. I usually try to escape. That’ll be good for Europe.

Have you shown your mother the film?

I secretly showed her, and she loved it. There are a couple moments that are pretty specific to us. It’s a fictional movie with a fictional relationship, and Goldie Hawn plays a fictional character, but I snuck in some specifics that really warmed my mom’s heart. In real life, I had visited my mom and her two cats, Andrew and Alex. One night, I heard my mom in her room, and she kept shushing Andrew. Finally, I hear some angry footsteps march to her door, and I hear her plop the cat on the ground and say, “You blew it, Andrew. You blew it!” Hearing someone talk to a cat so sternly delighted me to no end. Five minutes later, I hear footsteps again and her saying, “Okay, you get one more shot.” And so the first line, when you meet Goldie, she talks to the cat and says, “Not you, Andrew, you blew it.” That made my mom so happy, seeing her cat get a shout-out in the movie.

The personal process that Hawn goes through in the film, of re-finding purpose in her adult life, do you think all women face that as they enter middle age?

I don’t know about everyone, but my parents weren’t very happy together, and they both seemed stuck in their situation, so everyone felt stuck in the house growing up. I looked at my mother’s age and thought that I didn’t want to end up in a situation where I’m feeling stuck or unhappy. That hunger for adventure elsewhere keeps you from that.

Schumer tends to draw pretty polarizing reactions from viewers. Are you going to avoid the reviews for Snatched?

By the time a movie comes out, I’ve already been so hard on myself that anything anyone could be pointed out, I’ve already thought it. So the reviews aren’t all that helpful. I don’t know that I’ll read a lot of them. It’s not that I don’t want to hear it, because criticism makes people better, it’s just like, I read every clipping for The Heat, and it just made me feel bad. And internet commenters, I’ve avoided them forever. Especially anonymous comments, no good comes from that.

Do you feel any sense of duty, writing vehicles for female actors from a female perspective?

No, it’s been really fun! The Heat started with me wanting to be an FBI agent. I wanted to do all the fun stuff, chases and shooting and all that. I’ve been thinking about Silence of the Lambs lately, and it’s a fun feeling to see women be able to lead those stories. Fortunately, studios have been more receptive to that lately, and a lot of that credit goes to Bridesmaids. I remember before it came out, everyone would say, “We’re waiting to pick new projects until we can see whether Bridesmaids does well.” As if it would’ve all been done if that movie hadn’t done well, which is crazy.

A movie about two oblivious white tourists vacationing in South America comes loaded with cultural tensions. How did you navigate that minefield?

We spent so much time on that. My goal was that Emily would be the villain of this story. To me, they’re spoiled women. We tried to give lines to Oscar [Jaenada], who played Morgado, that point out what they’re doing. I feel self-conscious when I’m traveling as a tourist and not doing something to help humanity in any way. Emily doesn’t think of other people, and a point we were trying to make was that some people will travel in a selfish way that kind of misses the point. Just for the Instagrams.

I read this thing in a magazine, and it kinda changed my life; it asked where you would go and what you would do if you couldn’t tell anyone about it afterward. I asked myself, What do I actually like doing? How do I really want to spend my time? It was surprising, how many things I did that I didn’t really want to do, just for the sake of appearances. And the things I like are so simple: Going to breakfast alone during the week, listening to podcasts, having small dinners. I don’t like doing a whole big thing. I like having small meals with people who are funny and that you can talk to.