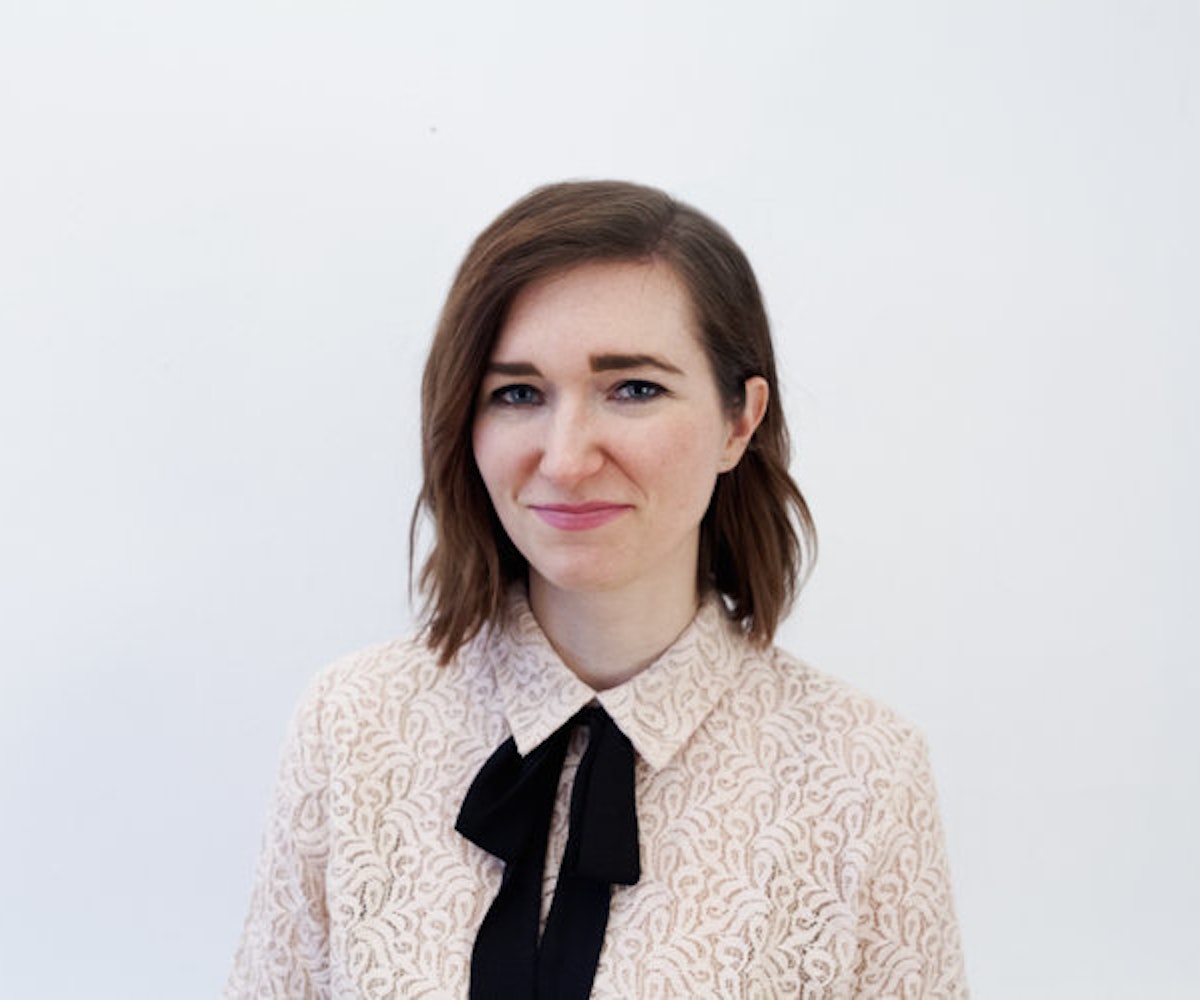 When Katie Heaney published her first memoir, Never Have I Ever: My Life (So Far) Without a Date, which centered around her futile search for love and the perfect man in her mid-20s, she had no idea that a year after publishing it, she would find it—only with a woman, instead. It's this realization of her sexual identity which is the basis for Heaney's second memoir, Would You Rather?: A Memoir of Growing Up and Coming Out, which is a cogent, funny, and reflective look at what it was like for her to come out as an adult and then enter into her first serious relationship. There's also quite a bit of love shown to one Mr. Harry Styles, which we are very much here for.

Below, we talk with Heaney about her memoir, being "likable" in her writing, and, of course, Styles.

After Never Have I Ever came out in 2014, did you know you would be writing another? When did you get the sense that Would You Rather? was something you wanted to write?

I came out in the summer of 2015, but I didn't know right away that I would be writing a book about it. I didn't know to what extent there would be a project about it, but I knew that I wanted to be open with the internet and with the people that reached out to me and connected with me after my first book. They were so vulnerable and open in their emails to me, so I felt like I opened this channel, and I didn't want to close it off or sort of be misleading. It's not that I have this massive following, but there were enough people that had reached out after buying the first book that I felt I needed to address it. [Then,] when I came out in a Tumblr post, I got really good feedback. And I was on the Death, Sex, & Money podcast, and the New York magazine Sex Lives podcast, and people really responded to those, and that sort of made me feel like, "Okay there's more to say here."

Your writing works well to balance the often-serious issues you're writing about with humor and relatability. How did you approach writing this book and creating that voice? And how does it relate to how you approached your first book?

For me, it was definitely a balancing act, because I want it to be something that stands on its own, where you don't need the first [memoir]. So much of my coming out process and my reflection on that process is wrapped up in having had this sort of public identity of my relationships—and lack thereof—and that dichotomy between public and private identity was such a part of [this story] that I didn't see how there would be a way to not bring my first book into it, or at least a couple parts. It was also about the relationship between my readers and me; a big part of my own struggle and my own coming to terms with my sexuality was what that would mean to these people that I don't know but that I feel connected to.

In your book, you write about figuring out how to be likable or not. How did coming to terms with your own likability play a role in this story?

I've always been someone who assumes a little too strongly that other people know who I am because I have such a strong sense of self; I assume that everyone else can get a clear reading on my personality as I see it before they meet me or when they meet me. But that's just not true, and the older I get, the more I realize that that's not true, but, also, the less important to me it is to sort of make up for that or worry about that upfront.

In some sense, the more information you have about a person, the more chance there is that you'll dislike them, because you won't agree with some opinion of theirs or your experiences will diverge at some point. Inadvertently with my first book, I was a really relatable canvas for all of these young women to fill in their own details, and I felt bad when I felt like I left my own path that I had created there. And I don't want to leave these people behind, but then, also, we never were the same. That is just the impression people can get when they read a book, but, of course, that is a limited perspective. It's as true as I can tell it and as thorough as I can be without being exhausting, but it's still only part of the picture. But I still am sensitive, and I still want people to relate to it, and hope that people enjoy it. It is hard with memoirs because when you look at reviews—and I try not to read them—people are really personal. It's rarely about the writing and more like, "I think this person sucks." I've got to accept that that's going to be the case for some people, because if I don't get along with everyone in my day-to-day life, there's no reason that I should get along with every person who reads my book. But it's definitely something that I sort of have to fight against.

It must be hard because you're not supposed to take criticism as something personal, but then when you're writing about personal things, that becomes a lot harder to do. Is there any way you preemptively prepare for that while writing?

I don't think I worry a lot about it while I'm writing because I think that if I were to get preoccupied with what I think people wanted to hear and wanted to read, then I would end up disappointing people, and I would end up with the worst book. I think the best chance I have at connecting to people is to be as honest as I can and, so far at least, I have found that that's sort of been the path to relatability, and to people feeling like they connect to my writing. I wouldn't call this book super-political, but it's definitely more political than my first memoir, and I am more conscious of the language I use and the topics I address. I mean, not that I was thinking, Well, what do I say so nobody gets offended? But I want to make sure it's more accurate to my ideals and my personal politics and the way I live them in my life. So I try to just be both thorough and honest and a little more accepting of the gray area and nuance than I was in the first one, or more than I was when I was younger. Back then, I sort of admired polarizing people a lot more, and wanted to be like, "You either love me and hate me!"

That type of polarizing personality definitely gets pushed in the media sphere, but its prominence feels very short-sighted.

If you read the internet, you'll be familiar with the type of writing and the "think piece economy." I have written a number of those too, and almost always, eventually, I'm like, "I don't think I knew enough what I was saying when I wrote that." Often, you're constrained by word limits and by people's interests and the time you have to work on something, so it's hard. But in a book, when you have the luxury taking more time and more space, I wanted to be more honest about uncertainty and just not knowing the answers to things.

Even the evolution of your two memoirs' titles—from Never Have I Ever to Would You Rather?—speaks to that embrace of nuance, which is so important when it comes to issues of identity and discovering new things about yourself, as you do in Would You Rather? Were you ever tempted, though, to assert more definite knowledge about yourself when writing about your past?

I definitely had to try to not be revisionist in history. It's tempting to say that now I identify this way, so I can look back at everything as "clues." And I do indulge in that when I looked at girls or famous women I was really obsessed with, that sort of for me is like a light-hearted, winky way of me saying, maybe something was going on there, maybe it wasn't. Other times, you really just can admire someone, and it doesn't have to be sexualized. You can sometimes have these hugely intimate same-sex friendships that don't have a sexual or romantic component to them. Not everything means something just because this is how I identify now. There definitely is an element of fluidity to it, and I want to make sure that is clear, because I think, for me, when I was struggling with my identity, it seemed like there was no space for that, it seemed like if you were gay or queer, you should have always known, and that's just not how it was for me.

This is also a perspective that I don't think we get as much of because there is understandably a need for people to be really explicit about how they see themselves and how they are for visibility, but sometimes, it's just as important to be really specific about the lack of specificity. Finally, I want to talk about Harry Styles, and how he seems like the one unifying person in the whole world who everyone can love. Why do you think that is?

He's extremely handsome, and that is always a good place to start. I probably should never meet him, but I still want to. I've heard from people who've met him, and things I've read online, that he just seems like a genuinely really kind and warm person, and I don't think that's something you see a lot in a young, male celebrity—a young, male musician, especially. He just seems really, like, psyched to be doing what he is doing and to be with his friends in this band and, like, just having a blast. And that's sort of infectious. As he's gotten older and become more like stylish and unique in his self-expression, I feel like there's also been this intrigue as far as his own presentation and the way he sort of plays with gender. He's said he's basically straight, so, I don't know, but I'm under the impression that he is someone who is open-minded and tolerant and not doing it for the woke points, but sort of just out of good-heartedness. And he has the voice of an angel. And he has dimples. And, yeah, he just seems like a sweetheart.

As I've said before, those aren't really good reasons, but I still can't explain why I lost my mind to the degree I did over him a few years back, and that's why I wanted to write about it. I think it was wrapped up in my coming out and trying to figure out who I was and what I wanted, and he happened to be the right person to latch onto during that time. Of course a lot of it is invented, because I don't know him personally, but he and his music sort of provided something that felt comforting and safe during that time.

And he was so good in Dunkirk! I was so thrilled, and I really want him to play the role inspired by him in the novel, Public Relations, I wrote with my friend, Arianna [Rebolini], because I think he would kill it in a rom-com, I think he would be so perfect.

Would You Rather?: A Memoir of Growing Up and Coming Out is available for purchase here, and you can catch Katie Heaney on the NYLON Book Club Facebook Live interview on March 28, at 11:30am. RSVP to that here.