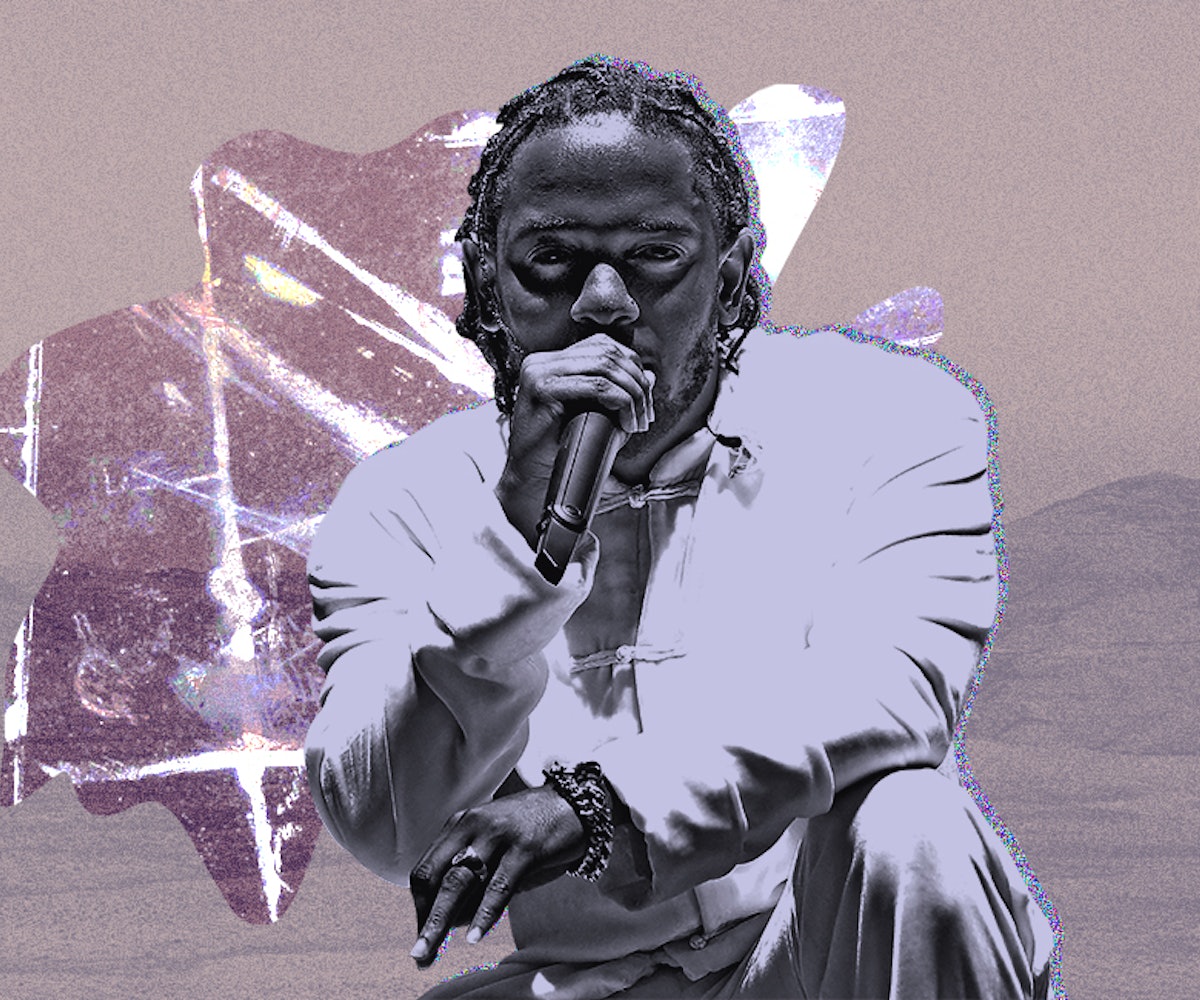 Kendrick Lamar’s “Alright,” the late-blooming centerpiece of his seminal sophomore LP, To Pimp a Butterfly, was a record so incisive in both its optimism and brutal honesty that its popularity now seems predestined. Its hook became a rallying cry for Black Lives Matter, and it won both the Best Rap Performance and Best Rap Song Grammy Awards (both of which were well-deserved, although it would be great if we could ever figure out what the difference actually is between the two).

DAMN., Lamar’s latest record, has been hailed as “a widescreen masterpiece of rap” and “the boldest statement Kendrick Lamar has ever made,” but the reality is that there’s no nourishing cultural rallying cry of the same magnitude to be found on it. While TPAB was an outward facing record, DAMN. is the polar opposite, a dizzying tour at breakneck speed around Lamar’s psyche now that he’s found himself with the most visible platform in hip-hop. (Whether or not it's one he wants has yet to be determined.)

Perhaps Lamar’s tremendous visibility is the reason that there’s nothing like “Alright” on the new record, though on “XXX.,” he goes to great lengths to show how being caught up in systemic violence and the territorial gang lifestyle can make it challenging to see the bigger picture of a movement like BLM, rapping, “Ain’t no Black Power when your baby killed by a coward/ I can’t even keep the peace don’t you fuck with one of ours.” That final line is a nod to the tremendous stature that his success has afforded him, but also recognition of the fact that his words can only have so much of an impact on a community dealing routinely with death and indifference from the authorities that should theoretically be protecting them. Even though he has continued to be active in the community where he was raised, Lamar seems aware that as his star has continued to rise, his statements will be dissected more and more by people who songs like “Alright” are simply not made for, which he addresses directly by placing the Fox News audio critiquing his BET Awards performance of “Alright” on DAMN.’s opener, “BLOOD.”

Lamar, like all of us, is a product of the world around him, one in which race relations have not improved, international tensions rage every day, social progress is obstructed, and American leadership is equal parts incompetent and insidious (though there’s only a single Trump reference on DAMN.). While things were hardly rosy when Lamar wrote “Alright,” disenchantment and cynicism are even more prevalent now than they were back in early 2015.

For that reason perhaps, the track that fills the “Alright” role of distilling our day-to-day reality on wax is “PRIDE.,” an ambling, guitar-powered deep cut that sounds like it could easily have been written for Mac DeMarco.

Whether intended or not, the record’s opening lines, sung by The Internet’s Steve Lacy (one of the song’s co-producers), have an eerily timely political message. “Love's gonna get you killed/ But pride’s gonna be the death of you and you and me,” he sings, a subtle warning about how the inability to recognize mistakes and admit fault could be the downfall of all of us.

On the opening verse, Lamar raps, “The better part, the human heart/ You love ’em or dissect 'em/ Happiness or flashiness? How do you serve the question?” Here, he’s asking about how we view others; whether we take them for who they are and embrace the whole of their humanity or if we dissect and nitpick, a tendency that’s never felt harder to avoid since so much of how we view others is directly related to what they say about themselves on social media. The more this happens, the more we look at people as a collection of posts and updates, instead of as whole beings who are just as complex as we are. This is hardly an original thought, but it does fit into the broader idea of dehumanization that Lamar addresses both here and throughout the album.

But “PRIDE.,” as with so much of DAMN., is about looking within, and reflecting on ourselves before we set our sights on the ills of those around us. There’s a strong religious bent to the song, as there is with much of DAMN., but there’s also lots of musing on Lamar’s ideal self. Lamar references a “perfect world” five times on the track, using that motif to talk about how he’d “choose faith over riches,” “work over bitches,” and “make schools out of prison.” Though terse and bearing a touch more stereotypical rapper machismo than necessary, it’s a powerful statement about the best self he could be if not bogged down in pride and cynicism.

Early in the track, he raps, “See, in the perfect world, I would be perfect, world/ I don't trust people enough beyond they surface, world.” At this time when we should be trying to trust each other, to organize and build, it has become increasingly hard to make those connections and take that leap. As our society grows more polarized and sensationalized, retreating inward or into our bubble is a natural tendency, one that Lamar wrestles with here.

In the second verse, Lamar says, “Sick venom in men and women overcome with pride/ A perfect world is never perfect, only filled with lies.” This is the world that we have, a perfect one doesn’t exist, and for us to get through these trying times we need to put our pride to the side, and hope that those who control what we cannot will potentially do the same. “Alright” wasn’t necessarily the optimistic call to action it was often painted as, but it had a powerful energy, thanks in part to triumphant production from Pharrell, longtime Lamar collaborator Sounwave, and Michael Kuhle. In a way, “PRIDE.” represents one of those times that precedes a moment like “Alright,” where solidarity seems out of reach.

It’s grim, but the skeptical and introspective nature of “PRIDE.” and DAMN. in its entirety does just as fitting of a job capturing the headspace of many Americans still reeling from the last few months. Lamar isn’t trying to be a mouthpiece, but he’s such a gifted lyricist and thinker that he almost can’t help but be one. The song works so well in part because it is informed by the down-not-out creed of a record like “Alright;” it opens our eyes to flaws both within Kendrick and in the world at large, an essential step in beginning to mend and grow.