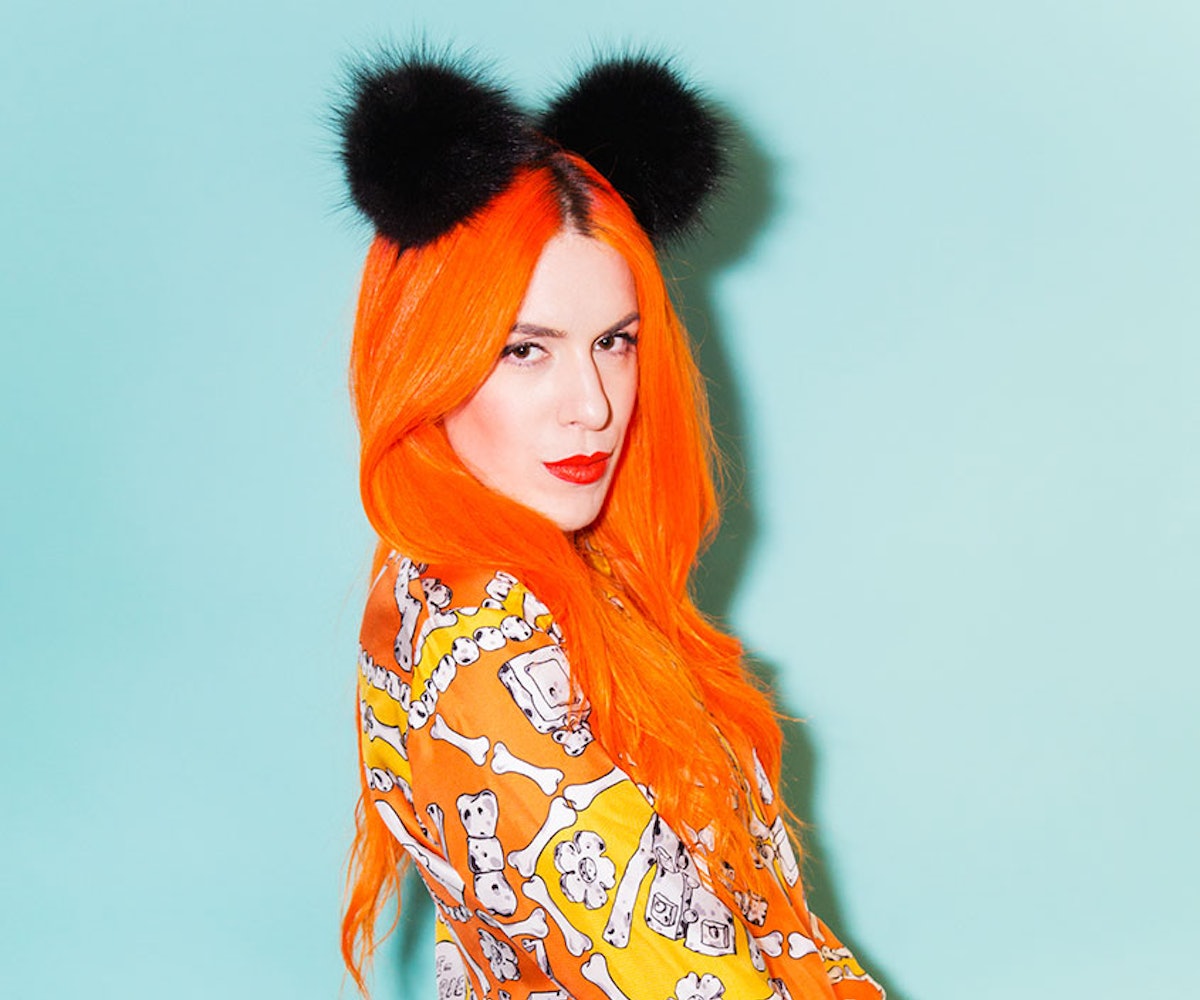 NYLON readers, I am so excited and incredibly honored to be one of your newest columnists. I’m Kerin Rose Gold and I’m an eyewear designer, artist, costumer, and professional bedazzler (yes). I founded my eyewear line A-Morir in 2008, and I’m the one responsible for flowers, chains, and crystals on eyewear in the 21st Century. I'm only 32, but I’ve had some special life experiences, from starting a business to losing an organ, being an international campaign model for a hair-care line, and working with rockstars at record labels in college. I’ve got a lot of stories. I’ve also done a lot of work on my "inner self" (or something equally Kumbaya), have learned a lot, and look forward to splattering some word vomit on your screens twice a month. Try not to get it on your shoes.

Growing up, I never considered myself a feminist. To be quite honest, I don’t think I knew what a feminist was until I got to college. I was fortunate: I had two loving parents who raised my sister and I in a household that was both traditional and progressive (and definitely something to save for another column). To be honest, I don’t ever recall talking about gender. I was bald for the first year of my life and people used to assume that I was a boy because my mom had no desire to put me in a headband and a dress so strangers would know I was a girl. Some of that must have stuck, because I was just as into t-shirts tucked in jeans as skirts I could twirl around in. I had stereotypically feminine toys, but they were balanced out with Transformers and Teenage Mutant Ninja Turtles. My dad bonded with his daughters via push-up contests and power tools. He later taught me how to build computers so I could score a summer job doing IT at a brokerage firm, where I deleted porn off the desktops of 40-year-olds who “didn’t know how it got there” (and who would later get chewed out for hitting on the 15-year-old girl in their office).

It wasn’t until recently, when feminists became a (necessary) part of mass public discourse, that I realized how important it was to be vocal about being one. I quickly asked myself two questions: The first was, have I always been a feminist? That was an obvious yes. The second: Did my fashion sense make me a shitty one? Hmmm.

Before I can figure out if I’m a shitty feminist, I better make sure I know what a feminist is. To put it as broadly as possible, being a feminist means you believe women should have the same political, social, and economic rights as men. And while there are many important and often neglected layers to this discussion–minority feminism and the treatment of trans individuals–this particular column is very much a first person account. My experiences are as a white woman, which comes with a specific set of privileges. I’m constantly trying to educate myself on the problems other women face that I don’t—this article from New Republic was a great education on the gender pay gap between women of color, and this article by Maisha Z. Johnson was an informative read on black and white feminism. Feminists from all walks of life should do independent research on intersectionality, racism, and transphobia—because in this case knowledge really is power! (I promise I won’t quote Schoolhouse Rock in every column).

But back to whether or not I’m a shitty feminist: I had to have a think about that. While cisgender traits are learned through society, I fit into the mold of feminine woman pretty snugly. I started sneaking makeup as soon as I hit junior high. I wore three-inch heels at my Bat Mitzvah, and for a decade and a half they got higher and higher. My awkward phase was only restricted to my face–I spent most of my teens and 20s wrapped in spandex. I take pride in my physicality. My personal relationship with feminism has treated “Fuck you, patriarchy!” as an attitude rather than a wardrobe choice.

I’ve always dressed provocatively. When I first got to college and started working part-time, I bought stripper heels with my earnings and wore them with jeans all the time, because I liked being tall and being seen. I liked reexamining the cultural implications of that kind of footwear. I took gender studies classes where I explored the power struggles of being a woman, while simultaneously working at a record label where a female boss once zipped up my hoodie in front of the entire office because it was "inappropriate" to show so much cleavage (and told the other college-age women that we shouldn’t act too friendly towards band members, because we would be perceived as sluts and groupies).

My wardrobe continued to push the envelope as I grew older and more independent. I worked in office jobs for a few years after college and respected the basic elements of that dress code, but once I started working for myself, I stopped wearing bottoms. I celebrated womanhood and independence with girdles, garters, and thigh-highs every day. I wore giant stripes of glitter on the sides of my face like Ziggy Stardust. Every day was “I Am Woman” day! It was empowering. While girdled up, I started my own business; with a newfound self-confidence and a few more years under my belt, I saw my wardrobe evolve again.

Now, in my 30s, my clothing is still provocative but much more subversive in its provocation. My personal style now is big and takes up space. I only wear a bra when necessary. I live in giant pants, caftans, oversized printed garments, jumpsuits, and voluminous coats. I don’t show off my body much, and wear heels rarely. Consciously, I like being a woman who takes up space. Subconsciously, it’s probably self-protection; a reaction to years of being catcalled and judged, and a middle finger to how society thinks a woman “should” dress and how little space she “should” occupy.

But here’s the thing: What you wear doesn’t impact whether or not you’re a good feminist, in the same way that I’m not a shitty punk fan because I don’t have liberty spikes and an actual safety pin through my ear. You can be a feminist and choose to dress like Gloria Steinem. You can paint riot grrrl messages on your arms and literally wear your feminism on your sleeve. You can celebrate your body like Amber Rose. Or you can do what I do, and wear whatever makes you feel comfortable, physically and emotionally.

There’s no telling where my wardrobe will evolve to next (my friend Ari Seth Cohen has me leaning towards an Advanced Style vibe), but it will never change my views on feminism. Because we live in a society where a woman reporting her rape gets asked what she was wearing. Because young girls are body shamed and sent home from school as “a distraction” for wearing tank tops. Because just last week I got followed and catcalled for blocks while wearing an XXXL teeshirt with a cartoon bikini body. It doesn’t matter what we wear; it matters that we educate ourselves and make noise about what’s really important.