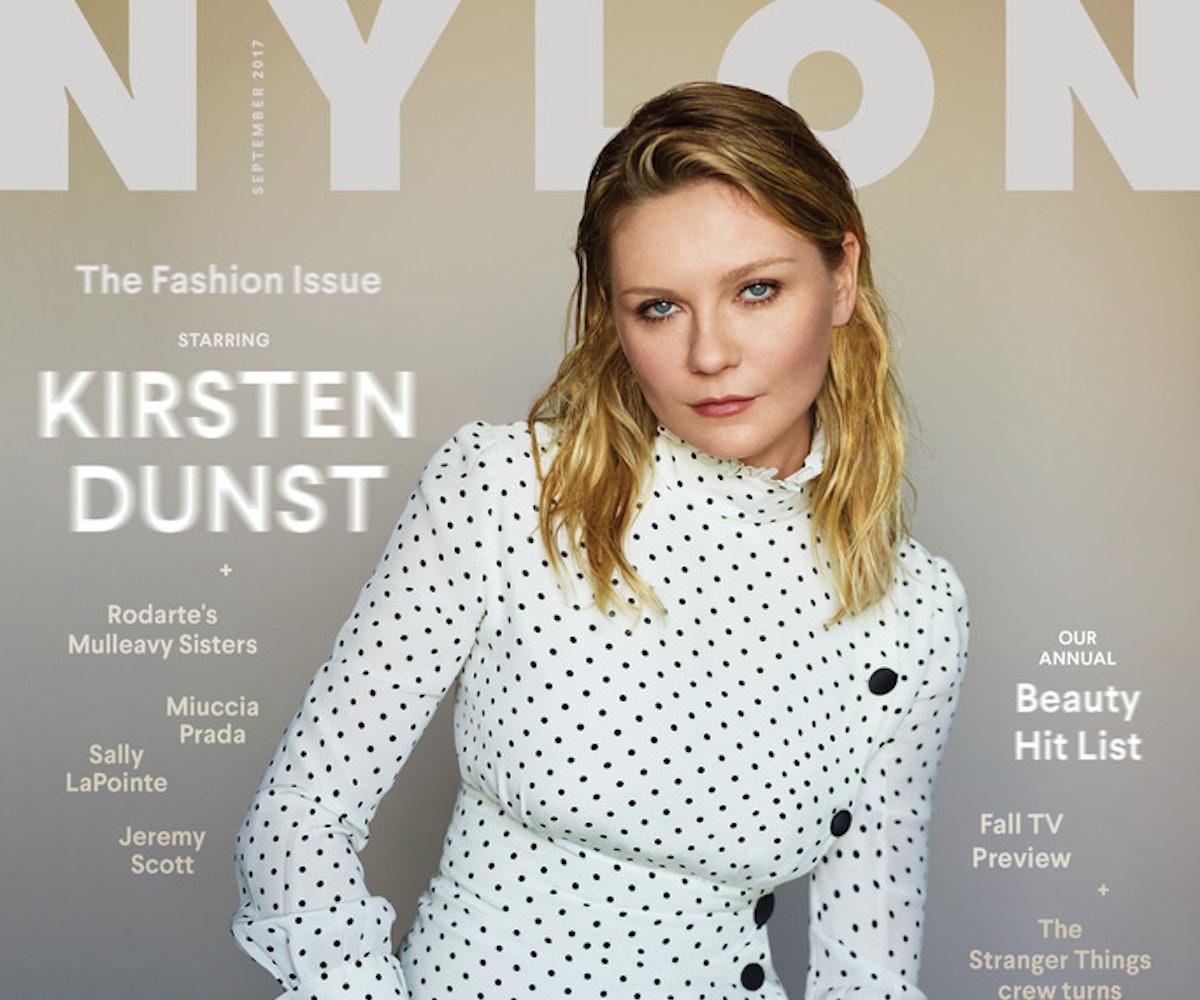 It’s fitting to flit between temperature extremes while speaking with the actress, who has made a career out of shifting seamlessly between cult indie flicks and superhero blockbusters. And like most of Dunst’s 35 years, this has been a busy one, from appearing in Cannes standout The Beguiled to this month’s Woodshock—the first feature film from Rodarte designers Kate and Laura Mulleavy—in which she stars. Dunst recently accompanied the Mulleavys to Rodarte’s first Paris Fashion Week showing. “Their shows always make me cry because they’re two of my best friends. It’s like watching your baby walk. I’m like, ‘Aw, my friends, look what they did!’” she says in a funny, throaty, emotional voice. “And I’m always crying. I’m just that way. I cry a lot and I love my friends and I’m so proud of what they do.”

Dunst first met Kate and Laura over a decade ago, when the Mulleavy sisters had just started Rodarte. “I was the first actress to wear their clothes, and so eventually they sent me a little box of weird trinkets,” she says. “There was, like, a plastic fairy village in there and a little disposable camera.” She sent a thank-you note, and met them soon after at a Christmas party, where they became fast friends.

To prepare for Woodshock, a dreamy, spooky psychological horror film set in Northern California’s Humboldt County, the Mulleavys asked Dunst to rewatch Suspiria and Taxi Driver, as well as a National Geographic documentary about the redwoods and a Rolling Stones concert film (“not the one with the Hells Angels,” Dunst says, referring to Gimme Shelter).

I speak to Kate and Laura about their first on-screen Dunst sighting as they drive back to Pasadena from the airport. It was the actress’s breakout role as an 11-year-old in Interview With the Vampire, a film whose style feels deeply in tune with Rodarte’s California gothic aesthetic: cobwebs, ghost towns, and decaying Victorian mansions—the dark fog lurking beneath the sunshine. They talk in a sisterly overlap, often finishing each other’s thoughts. “It makes me really nostalgic for a time when the big blockbuster would be Interview With the Vampire,” Laura recalls. “I remember thinking, ‘Who is this person who can be the best performer out of all these incredible actors?” Dunst’s otherworldly maturity was a panacea to child-star affectedness. Here was a young actress so gifted she could believably play an ageless adult trapped in a child’s body, holding her own against box office ruler Tom Cruise and hot rising star Brad Pitt.

All of Dunst’s films are rewatchable, and while she has expertly channeled darkness and depression in movies like Melancholia and The Virgin Suicides, the Mulleavys point out that she is also a gifted comedian. “I mean, Bring It On is an incredible movie,” Kate says, causing Laura to chime in: “What about Drop Dead Gorgeous?”

Dunst has seemingly unlimited range, recently garnering accolades for her role on FX’s Fargo, where she met her now fiancé, Jesse Plemons. “She’s such a natural actress,” says Kate. “She becomes the world of the film and the characters to the point where it’s almost effortless.”

Dunst’s transition from child star to adult actress has been equally graceful. She felt maternal on the set of The Beguiled toward her friend Elle Fanning, because it was Fanning’s first time being on a set without her parents. When they were at Cannes with the film, Dunst advised the young actress not to take anything for granted. “You have to enjoy these things, they’re special,” she told her, adding that “everyone’s career ebbs and flows, so appreciate the good times.” Dunst cites Shirley MacLaine (calling her “the fucking best”) and Gena Rowlands, whose naturalness onscreen feels akin to her own, as her favorite actresses.

Sofia Coppola, who has directed Dunst in three films, praises her openness: “She’s not scared like some actors can be—she’ll try anything.” While shooting The Beguiled, Coppola says, “It was really fun to see Kirsten go in and out of character—we’d be at lunch with her in her costume with sunglasses on, being her funny self, and then we’d get back to shooting and she’d transform into repressed Edwina, like her and Elle would be doing ‘Girls Gone Wild 1860s’ with red Solo cups, and then back into a serious scene.”

The Mulleavys wanted Woodshock to be “subjective and experiential”—the viewer sees the film through Dunst’s character Theresa’s eyes—and to serve as a love letter to the California landscape they grew up in. The film’s title derives from a Northern California colloquialism for the feeling of disorientation that comes from getting lost in the woods. And in the film, Theresa falls into paranoia from an unnamed drug and ultimately finds herself among giant trees. For the scene where Theresa first encounters the redwoods, the Mulleavys wanted to capture Dunst’s actual reaction to the mystical old-growth forest. “We blindfolded Kirsten and took her to one of the largest trees in the area,” says Kate. What wound up in the film was “just pure connectivity between her and this object, this living being, and it was pretty powerful.”

It’s also an excellent example of Dunst’s uncanny ability to play nuance, whether she’s landing a joke or hinting at unseen private depths, accomplishing more with a glance than most actors can with a monologue. “She has such a sensitivity to what is around her,” Kate says. She’s able to tap into things that are very difficult to tap into, that are so nuanced emotionally, and then bring those to life—it’s such a rare talent.” Laura adds: “It must be a very difficult burden to be that sensitive and able to reach those deep emotions that some people feel so happy to block off from accessing at all.” Dunst smiles when I repeat this to her. “I’m not a tortured soul in general,” she says. “I try to look at the positives of things.” But she did think that playing a deeply depressed bride whose wedding day coincided with a planet hitting Earth in Melancholia was great fun: “I would drive to work and be like, ‘I’m so lucky! I’m in a Lars Von Trier film!’”

While Dunst is originally from New Jersey, she is in many ways a consummate California girl—chill, funny, and slyly intelligent. She has a longtime professional’s lack of illusion about the entertainment industry, but there is nothing cynical or jaded about her. The Los Angeles suburbs of the San Fernando Valley, which she calls home, are hot, flat, and mostly humbler than their counterparts over the hill. The best parts are unpretentious and slightly out of time, much like Dunst. Calabasas, the far west end, is now home to Drake, the Kardashians, and Justin Bieber, who built custom luxury mansions on the giant tracts there.

Dunst moved to L.A. after Interview With the Vampire. “I started sixth grade in the Valley. We lived in Hollywood and I’d audition. And then we went to the Oakwood apartments [a complex populated by many young Hollywood hopefuls, and home to the Child Actor Program] like everyone else.” Now she lives in the Toluca Lake neighborhood, which is prized for its cozy small-town feel and close proximity to studios. “I don’t leave the Valley,” Dunst says. “To me, West Hollywood is like another state.”

She describes a recent night out, where she and Plemons hit the Foxfire Room, a wood-paneled dive on Magnolia Boulevard that features heavily in Paul Thomas Anderson’s Magnolia. When asked what directors she’d most like to work with, she names Anderson first, and mentions that he was the reason she was cast in Melancholia: “He recommended me to Lars,” she says.

Plemons, best known for roles on Friday Night Lights and Breaking Bad, is a fellow former child actor—he played young Matt Damon in All the Pretty Horses—and also lived in the Oakwood before settling in the Valley. “Before we got together, he lived so close to me,” Dunst says. “We went to the same grocery stores, but we’d never see each other.” Originally from Texas, Plemons is bringing Dunst to his home state the following weekend, and they plan to float on a river in inner tubes.

Another director with whom Dunst would love to work is Jane Campion. “I love Top of the Lake,” she says, adding that she also makes a point to seek out new talent, keeping her eye on Independent Spirit John Cassavetes Award winners. “The rule is you could only have spent $500,000. So that means you’ve done everything. You must be good if you made a good movie [within those restrictions].”

As a plate of sizzling fajitas is brought to the table next to us I lean in closer to hear Dunst describe some of the pitfalls of the movie business—all the projects that don’t get made, how hard it is to get out even a small indie. Although Dunst has been working for decades now, she says good roles for women remain scarce, and are divvied up between whomever is hot and bankable at the moment. “You’re almost better off being older,” she says, since Hollywood doesn’t know what to do with actresses in their mid-30s, who are past the point of “the young girl who’s just, like, beautiful and things are happening to her.” Dunst cares more about being in good projects than starring in not-good ones. “A lot of the choices I make are director-driven,” she says. “I’d rather do a tiny little whatever in a good film.”

She also would like to do more television, and will soon be delving into dark comedy again, in a series for AMC directed by The Lobster’s Yorgos Lanthimos, called On Becoming a God in Central Florida. In her downtime, she mostly likes to relax at home and watch movies and TV. Her favorite shows are Baskets—the FX anti-sitcom starring Zach Galifianakis as a clown—and The Great British Baking Show, which she says is “like wearing a blankie. It’s a comfy show.” She shares an anecdote about how she recently watched Tito, her cat, “gulp down a mouse, literally, like, chug it,” which reminds her that she needs to stop by the pet store on her way home to pick up food for him. As we get up to leave the restaurant, Dunst warns me that it’s going to be deadly bright outside, and she is correct—it’s blindingly so. We exit the dark, cool restaurant and part ways, my lunch companion heading back into the Valley’s sunlight-faded horizon.

NYLON’s September issue is on newsstands 8/22. Buy it now.