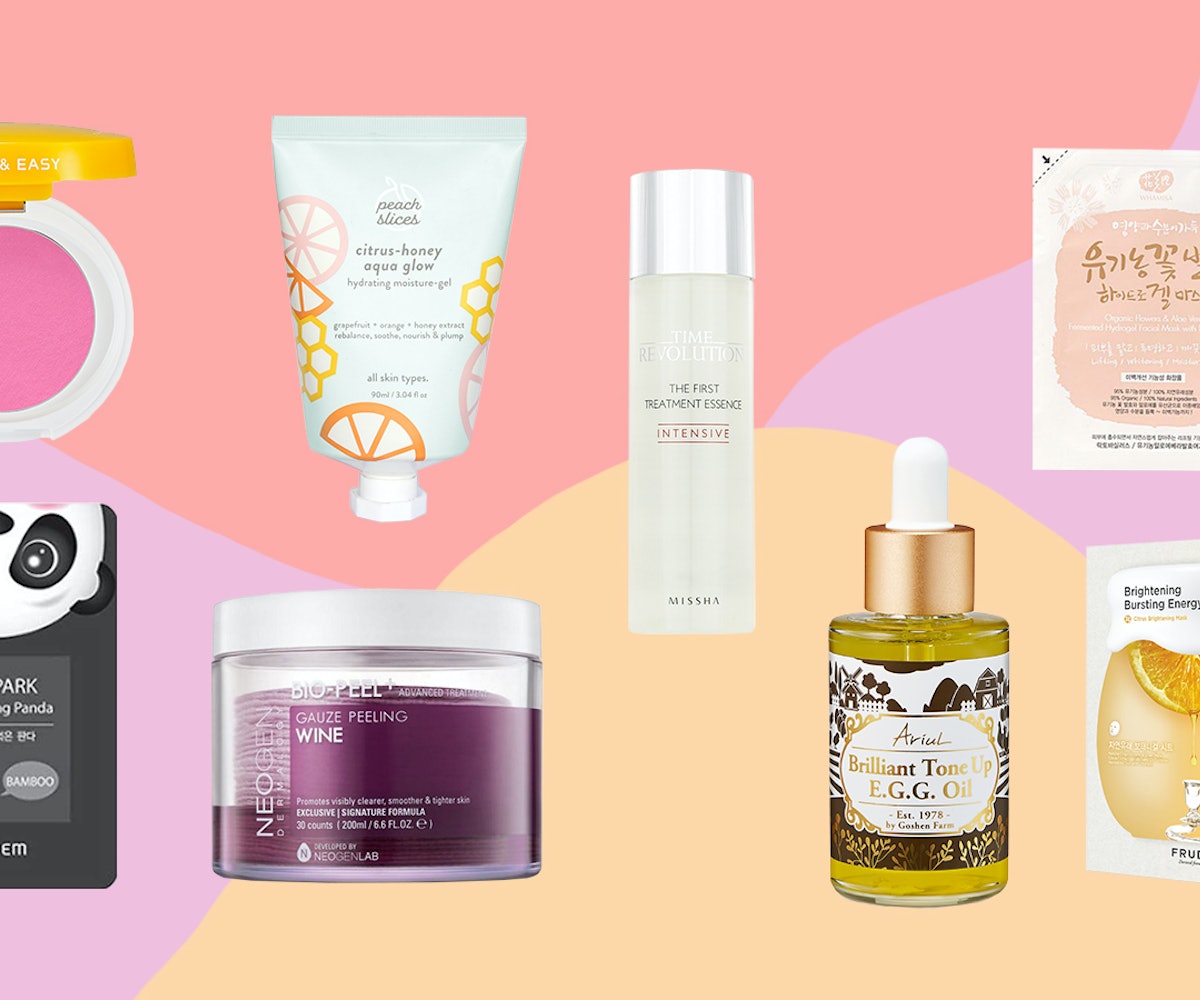 It was love at first essence, that's how I'd describe my relationship with Korean beauty. My first introduction came almost five years ago by way of The Wanderlust Project, a blog run by Sheryl Donerson, a black American expat living in Asia. It was an uphill journey from there. I say uphill because though my interest was piqued—the innovations! The cute packaging! The convincing results!—accessibility was, at that point, nonexistent. I would read a review of a product, excited to get my hands on it, only to realize it wasn’t available in the U.S. unless I ordered from unreliable websites that didn’t guarantee you’d ever receive the product, let alone that it was legit. As with most long-distance relationships, it was a frustrating one. But, luckily, it got easier.

The mainstream popularity of K-beauty really began in 2014, when Urban Outfitters expanded its beauty selection with brands like Holika Holika, Mizon, and TonyMoly. I’d argue, though, that the boom really picked up speed when the mecca of beauty retailers, Sephora, began stocking K-beauty products in 2015. Now, select Macy’s and Nordstroms, along with Ulta, Ricky’s, and, most recently, CVS, all carry K-beauty items of some kind. (The latter boasts more than 100 products, one of the largest introductory hauls we’ve seen.)

On the whole, this is great news. Charlotte Cho of Soko Glam says this level of familiarity with K-beauty was her goal when she first founded her site in 2012. “Before Korean beauty, there was a gap between department store and luxury products and then drugstore products, and I think Korean beauty filled this gap in the middle,” she says. “It's caused brands to rethink their strategy and rethink how to make these products more accessible and fun. This is great for consumers.” And Christine Chang of Glow Recipe notes that this is the path the movement was meant to go down. And it truly is, but, as Reddit’s very popular Asian Beauty thread states, with great power comes great responsibility.

If you trace the popularity of Korean beauty back to the beginning, you’ll find a whole bunch of skin-care products. The serums, face masks, toners, and cleansers are what Cho points to as the crux of people’s interest in the movement. “I think Korean beauty is a disruptor in the beauty industry because they’re allowing skin care to be more fun and accessible,” she says. “It’s not about one cleanser or one brand out there, it’s really about the whole philosophy behind it.” And the philosophy is a good one. Korean women’s approach to beauty is less about what makeup they’re swiping on their face to cover up blemishes, and more about what they're putting on to prevent those blemishes from even occurring. To that point, the products in the K-beauty space are some of the best and some of the most effective. But finding the ones that work amongst the white noise is a process, one that some Reddit users are worried isn’t at the forefront of retailers' concerns. One writes: “The only sort of downside I see is that [American consumers] only have access to certain products, and those products then get super hyped but in reality aren't a great representation of AB [Asian Beauty] products, and therefore people will write it off as a passing trend.”

That's where curating comes in—something that both Cho and Chang prioritize when it comes to the products they choose for their respective companies. For Cho, she wants users coming to her site to feel like they’re in Korea, without having to pay for the plane ticket. She does that for you, by visiting the country numerous times throughout the year to get insight from beauty experts and makeup artists there. That, in turn, dictates what products she chooses to stock. She’s also an aesthetician, so what’s going into the products is also very high on her list. “Sometimes I don't even test the products when the ingredient list doesn't look good,” she says. “I want to make sure everyone has a great experience and actually see results because, if I go toward the gimmicky ingredients or the gimmicky products, they won't have a good experience and then they might think Korean beauty is not reliable.”

Chang has a similar approach. She and her partner, Sarah Lee, both come from beauty backgrounds and their site, specifically, focuses on “natural, harsh-free” products. She sees curation as a huge factor in helping the movement from falling into the overdone category. “I think curation is a big part of combatting oversaturation because, if we're constantly finding new, interesting brands and we can bring new, interesting technologies to the dialogue, it's never going to be oversaturated,” Chang tells us. “I think the issue is that when people see a certain category taking off, they want to jump into that category without a strong point of view, that's when oversaturation kind of happens.”

Which brings us to the next concern: approachability. Access to products is one thing, but if it’s not paired with education, K-beauty can turn into an overwhelming beast that you'll, eventually, lose interest in taming. Informing customers about what a product does or how it works is fairly easy to do online, by way of how-to videos and digital explainers, but brick-and-mortar stores have to do a little more work. Donerson, who recently moved back stateside, relayed an experience she had recently that was particularly off-putting.

“I went to Ulta to ask about their Korean beauty section and the sales associates had no idea what I was talking about. I asked if they had any cleansing balms or oils, two popular Korean beauty-associated products, that brands from other countries also make, and again, blank stares,” she tells us. “I was really surprised at the lack of knowledge. I finally found their selection, and it was pitifully small and really underwhelming, with nothing to indicate that it was Korean or any different from any of the other products they had in the store. I feel like you'd already have to be a K-beauty fan to know what to buy.”

For someone like Donerson, who is more well-versed than most, she’s still able to determine the good from the bad on her own but, she says, she worries about the people who are just getting started. The interest is there, she says, but the understanding is lagging behind. “The future of K-Beauty involves more expansion and more education about their products and why they are effective. I don't think that's translated well to the average consumer,” Donerson says. “I think people who are interested in skin care and beauty are being courted, but the average woman trying to buy a new cleanser from Target is going to have no idea what Missha or Laneige is.” On top of informing salespeople about products, she suggests that traditional advertising—in magazines and beyond—could be helpful in reaching customers. Go where they already are, but come armed with information, too.

I made the argument over a year ago that the K-beauty movement isn’t going anywhere anytime soon, and it holds more weight today than it did then. But this might be the rare case when strength in numbers can, perhaps, do more harm than good if not approached with care. All of this isn’t to say K-beauty is at risk of failing, it’s really quite the opposite,  but there's a lot of potential for even more growth. Ultimately, when the dust surrounding the boom settles, the tried-and-true brands that take the time to curate products and inform, both themselves and their customers, will be the ones that rise to the top.

Four years after my first love affair with essence, I'll be spending five hours in Korea this summer during a layover. It's not lost on me how ironic it is that I'll be traveling 15 hours to gain access to a lot of the same products, now, available a mere 15 minutes from my apartment. And, like a true K-beauty devotee, I plan on taking full advantage of all there is to offer, everywhere I can find it.