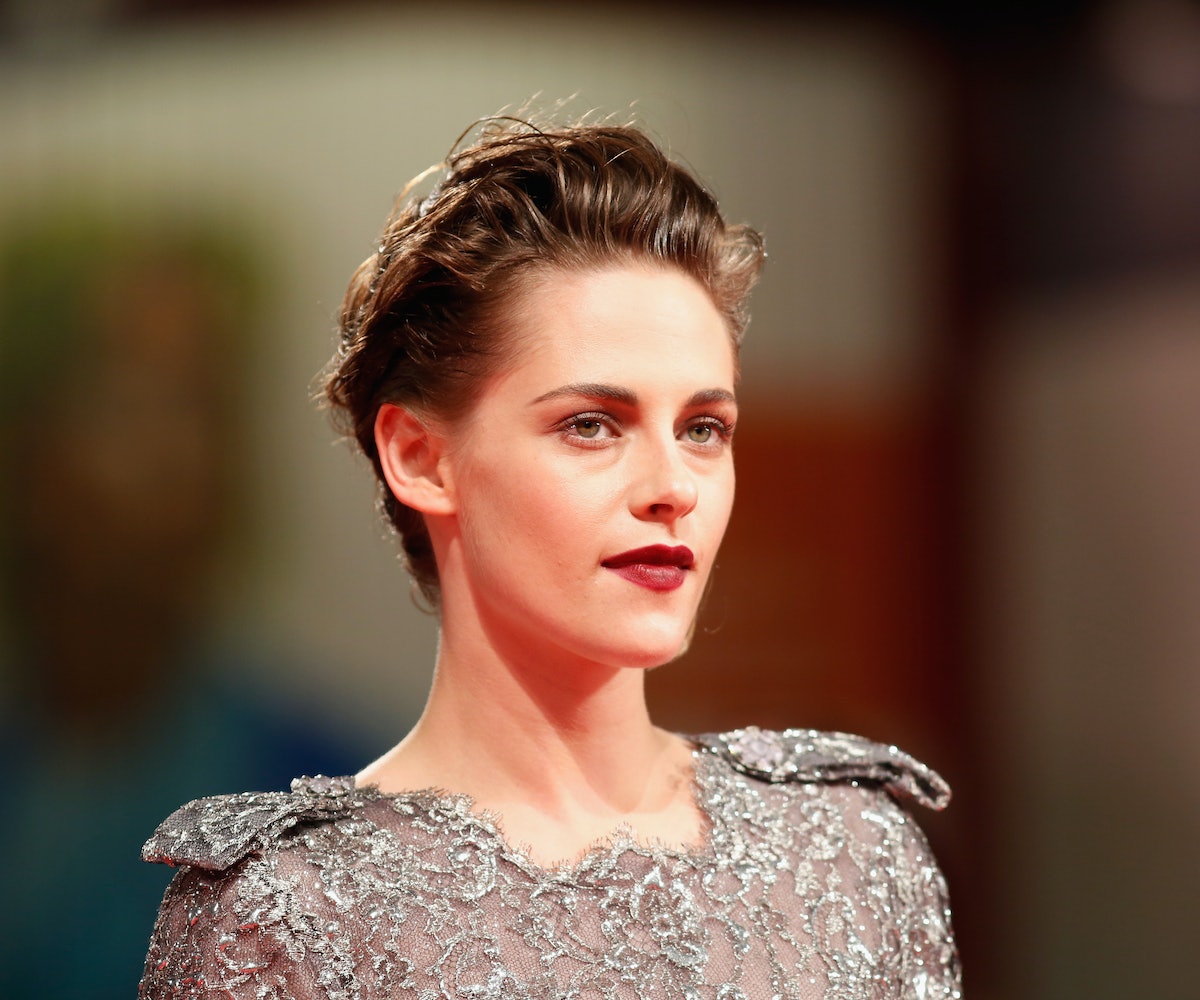 That’s our pal KStew, for you—always pushing the line.

In a truly good interview about her latest film, Equals, in The Hollywood Reporter, Kristen Stewart dropped some serious knowledge on first loves, making long-term relationships work, and what she goes through as a celeb who lives under the public eye before popping by the after-party at the PalazzinaG Hotel in Venice. As good and readable as her quotes are, nothing knotted our brows quite so much as her comments on being subject to men. They’re…interesting…and a tricky read, so let’s take this one step at a time.

Reporter Ariston Anderson questioned Stewart about the similarities between her current role in Equals and her star-making turn in the Twilight movies. Among other things, Stewart responded with this:

Both of them, you can criticize each character for being weak because they give it all up for a man. But I think that that is the most f—ing courageous thing you can do. There's nothing weak about being subject to something. In fact, in order to open yourself up and let all of your guards down and just give yourself to something fully, no matter what anyone else thinks, whether they think it's the right thing for you or not, I just love that. I just f—ing love that. That's so feminine. That's what women do. We have a faith in ourselves that is unpragmatic and in each other that's just emotional and f—ing strong. Both of those characters are criticized for being weak, for being subject to a man, but I think that that's a really bold and natural thing that we all want.

At first glance, Stewart seems to suggest that women desire, at the end of the day, to have men direct their lives—something we just can’t support. But that’s a pretty superficial analysis of what the very determined, often brash 25 year old is saying.

Granted, Stewart is couching all of this in terms of being subject to men, but look closely. What she may actually be saying is that all of us—women and men—desire to, “give ourselves to something fully". “There’s nothing weak about being subject to something,” she says. Certainly, if that something is love, a just cause, mindfulness, or anything else actually worthwhile, being subject can, yes, improve and expand your life, even if it’s scary or risky. What she’s saying specifically about women is that they tend to have the faith in themselves to take those kind of risks.

Clearly, Kristen Stewart is not endorsing female subjugation. Our current cover star is anything but an anti-feminist. But these complex ideas are hard to communicate clearly—even more so when you have the entire world unpacking your words.

She also spoke about drawing from her first love for the role. She said:

One of the reasons I was so intimidated by this movie is because I was like, "This is gonna hurt. I don't want to think about all that." It's good, it's cathartic, it's worth it. I feel good now on the other side of it. But at first I was like, "Oh God." If we do this right it's so basic, it's so fundamental, it's so young. Obviously Nick and I are 25. We made the movie nearly a year ago. We're still very close to our first loves. It's definitely something that we both know so well. It was a painful movie to make in every way. It was exuberant, cathartic and at the same time almost too self-reflective. We would go home and be like, "We seriously need a drink. Let's just stop thinking about everything. Let's not talk. Let's just take a walk."