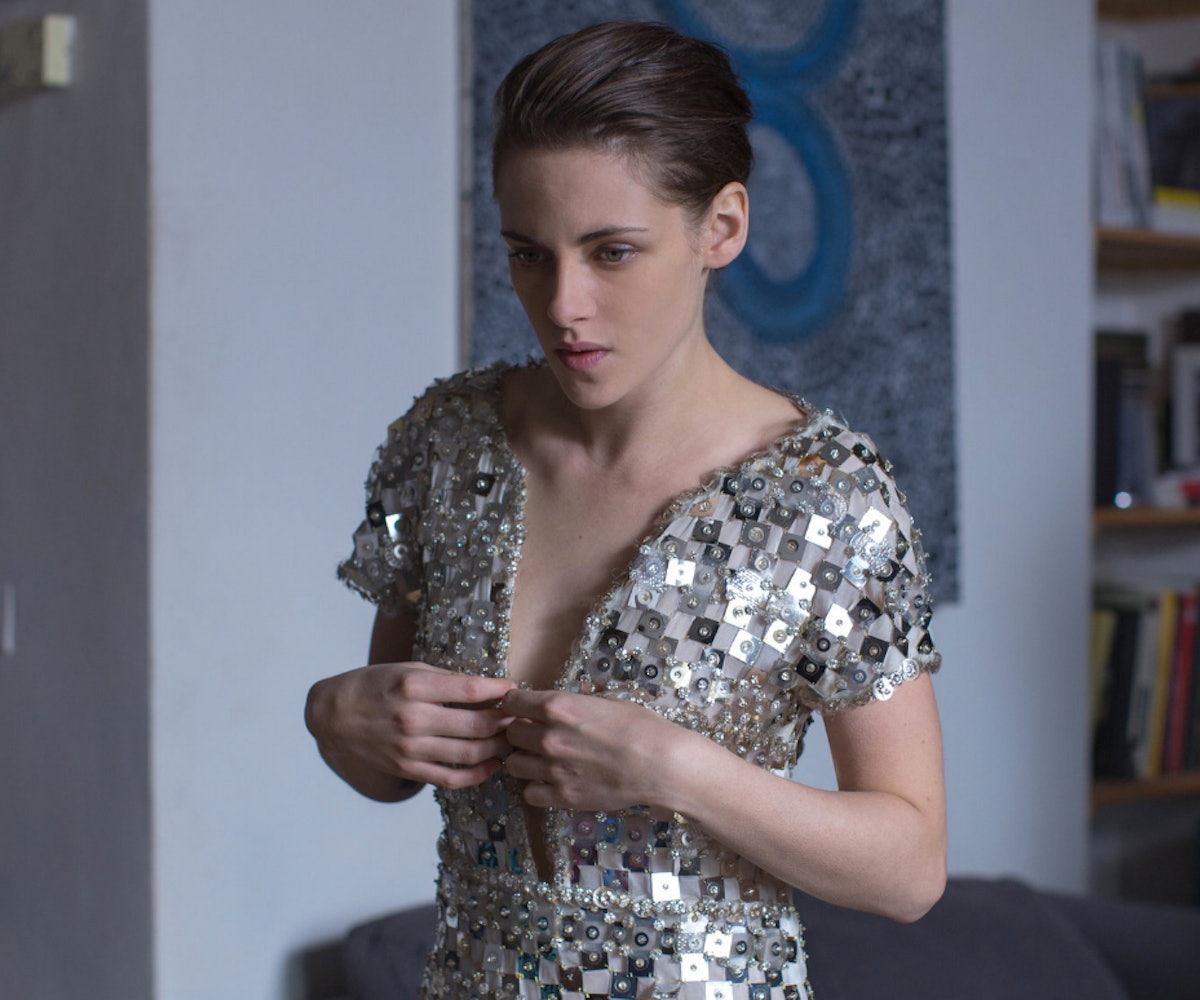 Way back in December, I saw an early screening of the new Kristen Stewart movie Personal Shopper (well, I guess, it's an Olivier Assayas film, since he directed it, but even he has said that working with Stewart feels more like a collaboration, not least because she is "the best actress of her generation"), I have been obsessed by a few of the movie's details and have—very frustratingly—not been able to talk about them with anyone, because the film is only coming out now, three months after I first saw it. Life is tough.

Anyway, while watching the film, I made a few notes in my notebook, and here's what they say:

would like a harness; would 100 percent wear have never met any millennial named gary ———was he even real———weird k stew stalker has read receipts (!)kristen stewart inserts a space before her ? in texts; who does that

As you can tell, I only ask the really important questions. But I mean, it is really strange that Stewart's character Maureen has a stalker who uses read receipts. Talk about warning signs.

Now, for anyone who has seen or even just heard about the movie, which revolves around both a murder mystery and a ghost story, my points of interest might seem a little bit trivial, but I have always been pretty obsessed with the trivial (particularly when it comes to Stewart, who first really caught my eye when she presented at the Oscars in 2013 looking gorgeous in a sleeveless dress with delicate bruises on her upper arms after having apparently stepped on some glass), and the cool thing about Personal Shopper (and maybe Stewart, in general) is that it fueled my obsession with the trivial, taking it to a whole new glorious level, all thanks to the extended scenes of Maureen texting with her aforementioned weirdo stalker.

Because, here's the thing: As much as I was weirded out by those read receipts, what was even more shocking to me was the way in which Stewart herself texted. Here's what she did: Every time she texted a question, she would write the sentence (or word: Lewis) and then manually enter a space before the question mark. What! Who does this? (Who does this ?) I was intrigued. I became obsessed. Upon returning to work from the screening, I immediately told a fellow Stewart aficionado about what I had seen.

I was met with this response: "All the cool kids do that now."

Apparently, though, it's true. Since seeing Personal Shopper in December, I have been seeing that space before question marks and exclamation points everywhere. Well, mostly on Twitter. Where the cool kids use it. And guess what? I have started to use it too. Because it is cool. And it gives my texts a completely different effect, and I am all about affectations via text message without having to resort to emoji.

All of which is to say, I totally welcome this punctuation edition of the Baader-Meinhof phenomenon, and am confident that even if you're reading this and are thinking, What is she even talking about? I've never seen that, you will soon be seeing it everywhere. Or at least where the coolest people are texting. People like Kristen Stewart. And posers, like me.