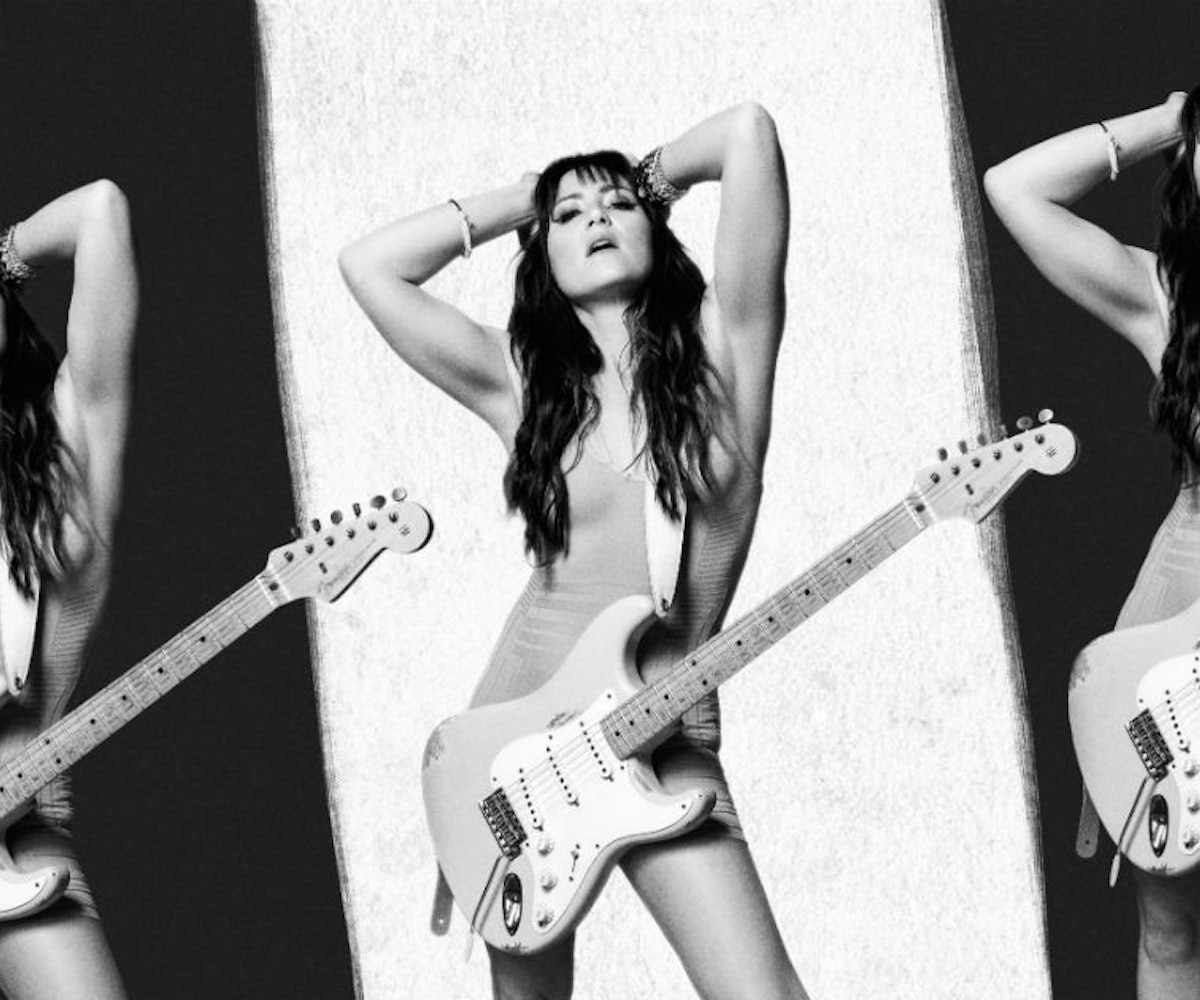 KT Tunstall has had a hell of a few years. "I've gone through my dad dying, I've gone through a divorce, I've gone through selling everything I owned and moving continents and relocating to Venice Beach, California, which I highly recommend if anybody has a crazy midlife crisis," she tells us over the phone. This turmoil served, in part, as the inspiration for her 2016 album, KIN, which she says is about "understanding life, and being wiser and more compassionate and empathic with myself and other people." With her most recent album, WAX, the Scottish singer-songwriter has shifted her focus toward human physicality, in the second installment of her mind-body-spirit triptych project.

On her sixth studio album, Tunstall decided to focus heavily on the electric guitar, which she calls "a literal strap-on," to explore the human body and its tremendous capacity for both strength and weakness. "The electric guitar is just such an amazing instrument," she says. "You just feel such power playing that instrument, and I knew I wanted to explore that." "Human Being," the latest single from the album to have a corresponding visual, is, as the name suggests, an ode to humanity—the incredible feats the body is capable of, as a vector for creative and athletic energy, as well as its fundamental fallibility. Tunstall directed the video herself, and recruited an eight-year-old martial artist, Eccaia Sampson, to showcase the "warrior female energy" she continually refers to when describing the themes of WAX.

The body has become a highly politicized site, especially through the lens of American politics. Tunstall, a U.K. transplant, certainly doesn't shy away from the subject of the current administration. Recently, she condemned Donald Trump for playing her music at his rallies, a practice that artists such as Rihanna and Pharrell have also condemned.

Below, Tunstall shares the new video for "Human Being" exclusively with NYLON, and talks to us about hanging out with Chrissie Hynde, touring with an all-female band, and what to expect from her next album.

Starting off, I wanted to talk about the '80s influences in the video for “Human Being."

I'm a huge fan of John Hughes movies, and I'm an '80s kid, so all of that imagery from that time is kind of my childhood. It's my coming of age. Also the song, "Human Being," was certainly inspired very much by [Giorgio] Moroder, who produced Blondie. That was something that we were looking to as inspiration. The analog synthesizer sound in that song is very much of that time, and we used the old, real instruments. It was just a time that I remember, there were these really kick-ass rock women. The first woman I remember seeing on the TV was Kim Wilde, and she was doing "Kids in America." That was the first time I'd really seen a rock 'n' roll chick on TV, because I grew up with Whitney Houston and Madonna and, you know, Wham! and Prince and Michael Jackson, and they're the most incredible artists, but they weren't artists that I looked at and went, "Ooh, I want to do that." It was definitely a time where there was very strong female energy.

It feels like softer, acoustic music was at the forefront of the alternative scene for a while, but heavier guitar rock seems to be making a comeback lately.

I think there's always been that—if people see a girl with a guitar, they're expecting them to play fucking "Smelly Cat" by Phoebe from Friends. It's just very easy, in music, to pigeonhole. It winds me up that "singer-songwriter" is even a genre, because David Bowie was a singer-songwriter, and Prince was a singer-songwriter. I think that it's interesting because women are absolutely ruling the charts in pop and rock and urban music, but rock music has become somewhat of a desert for women. I had a great time, recently, on tour with the Pretenders, so I was able to do that amazing thing of hanging out with Chrissie Hynde right before releasing a record, which any female artist would be so delighted to do, because just being in her vicinity is this amazing reminder of this warrior energy. It was definitely part of the inspiration of this record, really.

Speaking of that warrior energy, how did you find Eccaia Sampson?

I was opening up for Barenaked Ladies this last summer. [Lead singer] Ed Robertson’s guitar tech is a guy called Bungie, and one day he was like, "Hey, you should check out this video of my daughter, Eccaia. She's pretty cool," and it was this insane video of her competing at a nunchuck championship, and she's like one of the best under-15 competitors in Canada. We were just absolutely blown away, and as soon as I saw her, I was like, "She needs to be in the video for this song." Because the song is all about fighting to be something, you know, you're trying to impress, you're trying to be the best you that you can possibly be, but at the end of it all, you are just human, and we have to accept our humanness. I love anyone of any background surprising your judgment of what that person is supposed to be able to do. To see an eight-year-old girl doing what the vast majority of adults are not able to do is really exciting and inspiring.

This album is the second part in a trilogy, after KIN. It seems like such a departure from that, in a way. Where did that heavier sound come from?

The funny thing is that, obviously, you usually decide to make a trilogy before you start making it, and I didn't. I decided it was a trilogy after having made that first record. I actually made this record coming from a completely new place as an artist. I was like Keanu Reeves in a slimy pod, and I just unplugged and started again. When it came to writing the last record, it very much felt like the beginning of part two of my whole life. It was all about overcoming difficult stuff, and about the soul and the spirit transcending the physical experience. And then after I finished that record, I really got my mojo back. I just knew I wanted to make a harder rock record, and that, to me, really spoke of physicality. I was gonna make the record with Nick McCarthy of Franz Ferdinand, so he was the perfect person to help me on that journey.

How was it working with Nick McCarthy?

It was extraordinary. I'm a huge fan of the band, and Franz Ferdinand changed the course of indie rock through the 2000s. They set a bit of a new precedent in terms of sound and approach, and a lot of that was down to Nick's background, of growing up in Germany and having a very close relationship with British rock music. He obviously brought this great kind of rock sensibility, but he's also a really phenomenal writer. We had a week where we were gonna do pre-production, but, in fact, we just sat in the studio—he has a garage studio in East London, which is amazing—for five days and we wrote some of my favorite songs I've ever written.

Do you think that working with set concepts for each album has changed the way you write music?

Just that challenge of having some parameters, and having some structure to what I'm writing about, is really exciting. I love the feeling of solving a puzzle, and that's what it kind of ends up feeling like. It just makes me ask questions of the process. With WAX, I had to always be aware to not stray too far from the theme that I was talking about, and that was interesting, because it made me examine deeper, rather than wider, which I think can often result in some really interesting ideas. You're not covering as much subject matter, but you're really going deeper into the subjects themselves.

You recently spoke out about politicians like Donald Trump using your music at their rallies, which has been a hot topic lately.

Rihanna just spoke out about it, didn't she? It's fucking bullshit. It's like, you can't just steal someone's work and use it to promote your brand. Like, a company can't do that. With politics, it's even more difficult, in some ways, because someone like Trump, and the destructive nature of how he's conducting himself in the highest office in America, your music is attached to that behavior. I do think that something needs to be done to lay down some rules about politicians using music, because they should be going through a legal process of asking for permission. This is intellectual property. There are copyright laws for music, and it needs to be enforced in that area for sure.

You’re touring with an all-female band right now. How has that been?

I found myself kind of moaning a lot, that there weren't enough female musicians in rock music. And then I was like, "Hang on a minute, I'm an employer. I need to stop whining and employ some amazing women," and it just coincided with meeting some fantastic female players. I have a full five-piece female band for my headline tour in the U.K. and Europe next year. It's a really amazing energy. I kind of underestimated how exciting it would be to play rock music with all women. One of the coolest things is seeing people's reactions to it. I look forward to it not even being an issue that you'd bat an eyelid at in the future.

Can you say anything about what comes next in the trilogy?

The next record is all about the mind. I just imagine, because it's about the mind, I'm gonna be interested in exploring patterns and repetition and polyphony. It's such a fascinating subject when you read up about the brain. The thing that I think interests me most is this ability that we have, which is actually to physically rebuild neural pathways in our brain. That, to me, is just—pardon the pun—it's totally mind-blowing. There's a lot of interest, for me, in this next one, and I'm gonna be doing a lot of reading.