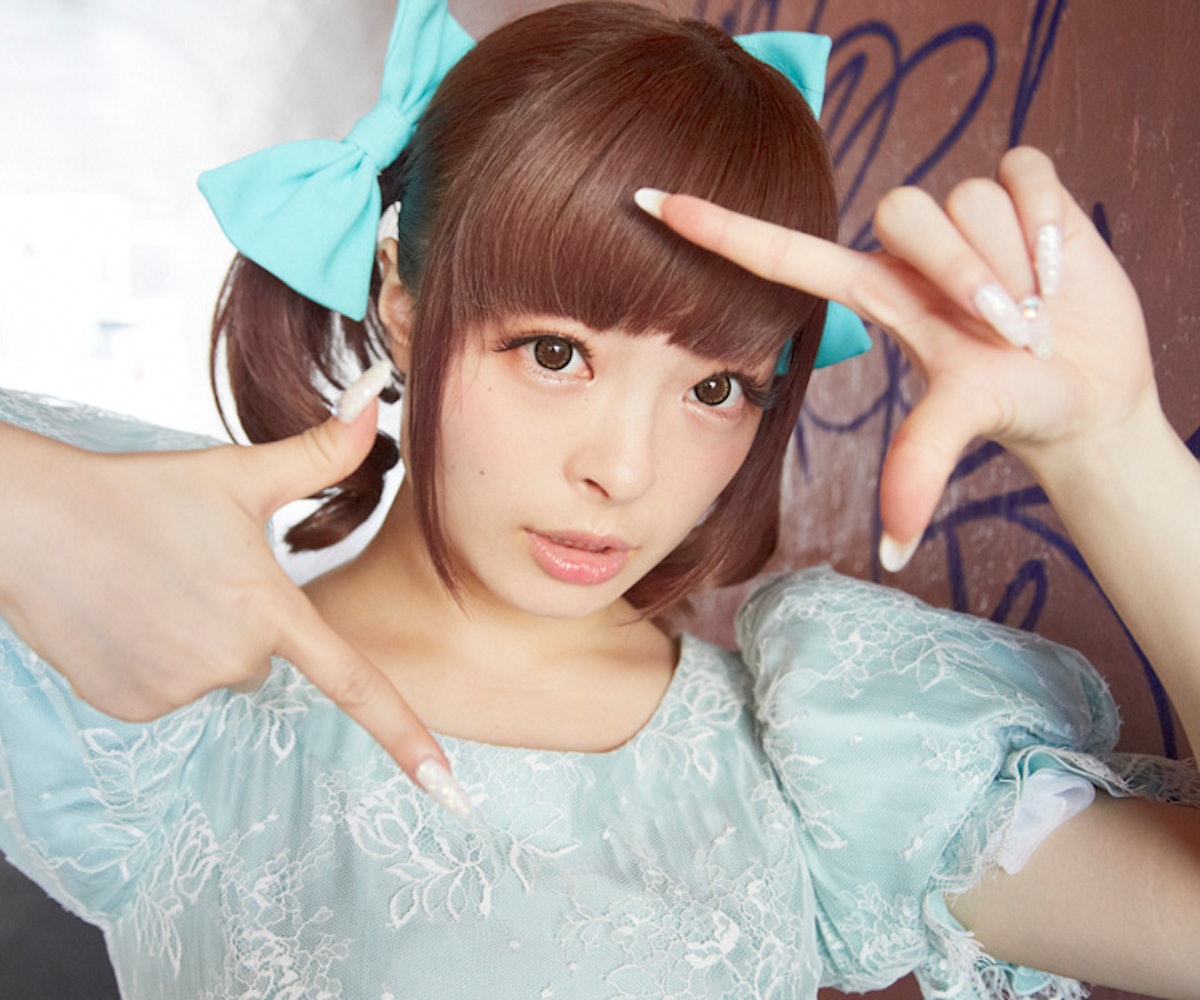 Looking into Kyary Pamyu Pamyu’s eyes is like communing with a real live anime character. Her brown irises gleam with the same shimmering reflections as one of the bubble-eyed cartoon sprites. Whenever she blinks, the wide-eyed wonder of a girl always on an adventure is instantly refreshed, which is simultaneously eerie and cheery. Turns out she's wearing a special pair of contact lenses, just one of the many over-the-top fashion statements this Harajuku style icon-turned-pop star has made famous.

“I want everything I do to be a little surreal,” says the 21-year-old, via a translator, during a recent interview in her native Tokyo. Her latest ode to surreality is Pika Pika Fantajin (or, roughly translated: “sparkling fantasy people”), her third album, which came out in the U.S. in July and might be the aural equivalent of stuffing cotton candy in your mouth until your cheeks explode. Her wild videos (think Tim Burton ransacking the girls’ section of a toy store), chime-simple vocals, and ecstatic fashion have made her Japan’s weirdest darling and a Twitter force with 2 million-plus followers—and she's gaining global traction.

It’s an ordinary Tuesday in Tokyo’s hip Ebisu neighborhood, with salarymen slipping off to the nearest watering hole, but even now, hanging out at her manager’s office, outfitted in a girlish lavender sweater with ruffles, pleated skirt, and pastel sneakers, Kyary gives off a hint of the supernatural. The contacts help, but there’s also the whole legend of Kyary Pamyu Pamyu, one of Tokyo’s most original pop confections and a branding juggernaut (her visage has sold cell phones, sneakers, fried chicken, and much more).

Born Kiriko Takemura in 1993, she was bestowed the nickname Kyary, the Japanese approximation of the Western name “Carrie,” by a high school friend who thought she seemed “like a foreign girl,” she says. Kyary added the nonsense words Pamyu Pamyu to mint her earliest incarnation as a Harajuku fashion blogger. Her vivid get-ups with a daffy, clownish streak—she’s got a thing for crooked blond wigs—garnered attention from the artist Sebastian Masuda, an icon of kawaii culture. Soon after, Kyary met Yasutaka Nakata, a future-minded music producer known for his synth-stacked and sugar-coated compositions for the long-standing trio Perfume and his own genre-mutating project, Capsule. He wrote KPP’s breakthrough hit, the song-narcotic known as PonPonPon, which spawned a global-wide WTF, thanks mostly to a music video art-directed by Masuda. Obsessively crammed with juvenilia, the video, with 69 million views and counting on YouTube, kicked off a career that ruptures fantasy with nightmare. “I try to create chemistry between kawaii and darkness,” Kyary says. “The dark isn’t supposed to be there, but that’s what I like about it.”

Nakata writes and produces all of KPP’s music, but unlike many of her J-pop contemporaries, she isn’t regarded as a mere vessel controlled by one of Japan’s pop puppeteers. “Over dinner, we’ll discuss ideas,” she says. “It’s my job to know how to perform any song he’ll give me, but I like to say, ‘can we try this or maybe this?’” She also wants to write her own songs soon, but she says those are still “a secret.” In another sign that she’s spreading her wings, collaborations are forthcoming with the French art-pop collective Yelle and British producer Sophie.

Pika Pika Fantajin features “Ring A Bell,” her first song sung all in English and her most deliberate bid for Western ears yet. It’s repetitive to a fault, perhaps in hopes that it will catch fire in Japan’s all-important karaoke market. But if there’s anything KPP has on her side for a second try, it’s her savviness.

An admirer of stateside pop princesses Katy Perry and Ariana Grande, Kyary understands the intertwined values of charisma and performance. She has an expansive idea of what makes a pop star in the Internet age and cites vocaloids like Hatsune Miku—an avatar-diva fleshed out, in a sense, by fans who write songs for her—as inspiration. “That’s the future of music in Japan,” Kyary says. “Anyone can write the songs.”

Meanwhile, the night owl (she doesn’t fall asleep till 3 a.m.) and social media addict is keeping her ears open and her eyes wide. Savvy innocence is her best weapon. Back when she was a Harajuku girl, she caught flak for her outlandish outfits, not least of all from her conservative mother, but KPP kept the faith. “I always tell teenage girls to do what they want to do, wear what they want to wear. Everyone else will have to catch up.”

Read more about Kyary Pamyu Pamyu in the October issue of NYLON, on stands now.