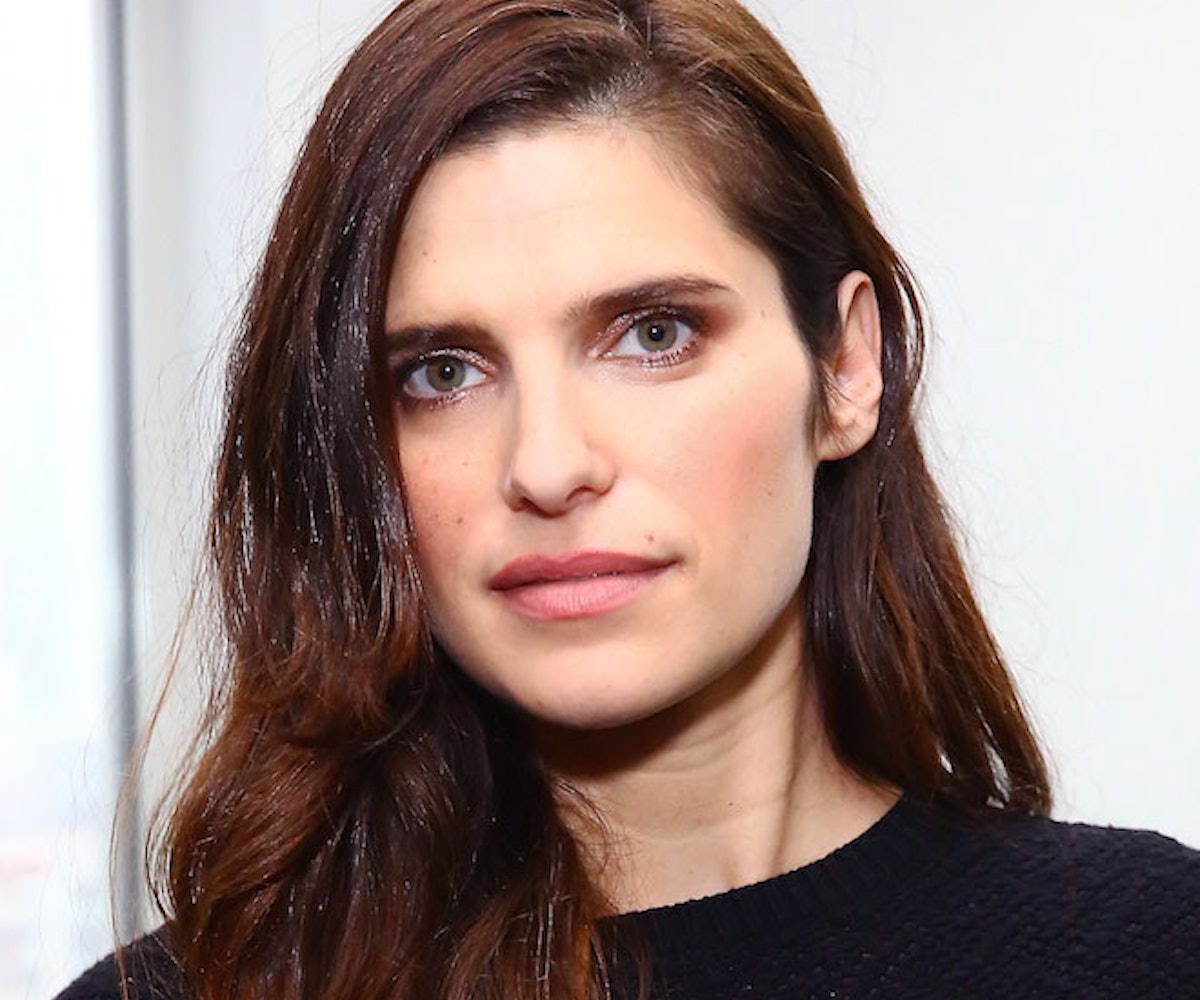 Lake Bell makes for a very charming Brit in Man Up, an equally charming British rom com that just had its premiere at the Tribeca Film Festival. Bell plays Nancy, a single girl in her mid-thirties who is mistaken as someone's blind date, and decides to run with it—because what could possibly go wrong? (Hint: everything). Simon Pegg plays Bell's comedic and romantic foil, and they flaunt their exceptional chemistry over bowling and drinks at the pub, before he inevitably discovers he’s got the wrong girl. Or maybe she's the right one? Also in the mix is Nancy’s creepily hilarious ex-classmate/stalker—played brilliantly by the dramatic actor, Rory Kinnear—who will stop at nothing to thwart the budding romance.

Bell is coming off the success of her directorial debut, In a World..., and after giving birth to her first child with husband Scott Campbell, is gearing up to shoot her second feature, Emperor's Children. When we sat down to chat with the actress, she immediately kicked off her heels and tucked her legs up on the couch, as if to say, “Yes, I look incredible in this fancy dress but I’d rather be wearing boyfriend jeans.” She does not speak in a British accent (the entire time, anyway), but she is just as charming as she was onscreen.

Have you ever been on a blind date?

I have been on a blind date. It just didn’t work out. It’s one of those things where it was like, ‘Well, just go on it, and if it doesn’t work out you’ll be friends at least. You guys should know each other.’ And I did and I was like, I don’t even know if we really need to be friends, you know what I mean? I have friends. But it was so long ago. I don’t have any raucous blind date extravaganza stories, but I’m constantly trying to set people up on blind dates. It’s just offensive.

Lots of succ-sexesses, which is the best kind of success! I’m just kidding. If you ever want to be set up on a blind date, I can take care of that.

Tell me about the audition for this film. I imagine you were asked because they had seen In a World... and knew you could do accents.

Yeah, I had gotten in that room because they had seen In a World... and loved it. So they had seen that were like, ‘God, she could be our Nancy. She’s American, but she likes accents. Let’s have her come in.’ I remembered meeting with them, and at first I was in director mode like, ‘They should just use a British person. I don’t know what the hell I’m doing in this room. This is ridiculous—trust me, casting-wise I think it would just be better.’

That’s a great way to approach an audition—‘I am not the person for this.’

I know, and I do it all the time when I am in director mode. Like, ‘I really think you should look into…’ and I mention the name of some other actor. I don’t know whether I want something until I’m in the room, and in this case I remember preparing so adamantly because I want to have the accent out of the room when I’m trying to create a characterization, so it’s not like I’m wearing the accent and you’re noticing it. When I got in there it was evident that Simon and I had a camaraderie of comedic spirit, and once that was there I felt more comfortable that the accent would come.

What do you find is the trickiest part of doing the English accent?

Look, doing any accent and trying to create a fully realized character so that you’re playing the character and not just doing the accent is hard. By the way, I was also pregnant, in my first trimester, when I was doing this movie, so I was very, very tired. Your brain is functioning to play the character but then it’s also running another system that’s the accent application. You want to forget about that one so you’re just running the acting application.

Some of my friends who are bilingual say that when they spend a lot of time speaking one language, they start thinking and dreaming in that language. Were you thinking in a British accent?

I would go back and forth. The test is if you called up in the middle of the night like, ‘There’s a fire drill and everyone has to evacuate!’ would you be like ‘Oh shit’ or ‘Oh blimey?’ And for me there was a certain point where I would have said ‘Oh blimey.’

As an American actress who does comedy, did you ever think you would work with Rory Kinnear?

Well, that’s what’s so brilliant. Casting Rory as that character—and he’s a masterful dramatic actor—helped ground it. It’s the insurance policy that allows that character to not take you out of the movie. If you put a crazy comedian in there, you have the danger of that character not folding into the way Simon and I were playing.

At the screening Ben [Palmer] did a little Q&A and said he always let you do a take that was a little “looser.”

Are there any memorable moments in the film that came from that specifically?

So many moments. I remember with Rory, one of the most difficult scenes to shoot was when he’s feeding me pudding at the end. I’m supposed to be in the darkest, saddest time for my character and I’m crying and he’s very slowly and deliberately trying to make me laugh with how he’s taking that spoon of chocolate “poo-ding” and trying to shove it in my mouth. He’s just defacing my dignity by smearing this poo-like substance all over my mouth and then licking it off my face. It was very difficult. The other part was Rory Kinnear saying, ‘Slide it on down to Chillsville.’ We all knew that it was coming and we had to do it like 50 times because everyone was smiling.

Are you actually good at bowling?

So I heard you remained British the entire time you were filming. Were you British when you spoke to your family?

No, when I spoke to my family and my husband I was not British. But I went to college there so when I was with my college buddies going to the shops to get some food or in a taxi or with the crew, I was British.

I also heard that when you broke it at the end, the crewmembers were like, “She’s American?”

It was sort of sad because I had this whole romantic speech that I thought was going to be really sweet. I was going to come out to them and be like, ‘Hey, I haven’t really been being myself this whole time and I want to tell you thank you from the real me.” And I thought everyone was going to be like ‘Awwww,’ but it was more like ‘Fuck off, you deceiver!’

If, like us, you can’t get enough of Lake, you can catch her on Children’s Hospital every Friday. She also directed the upcoming episode.