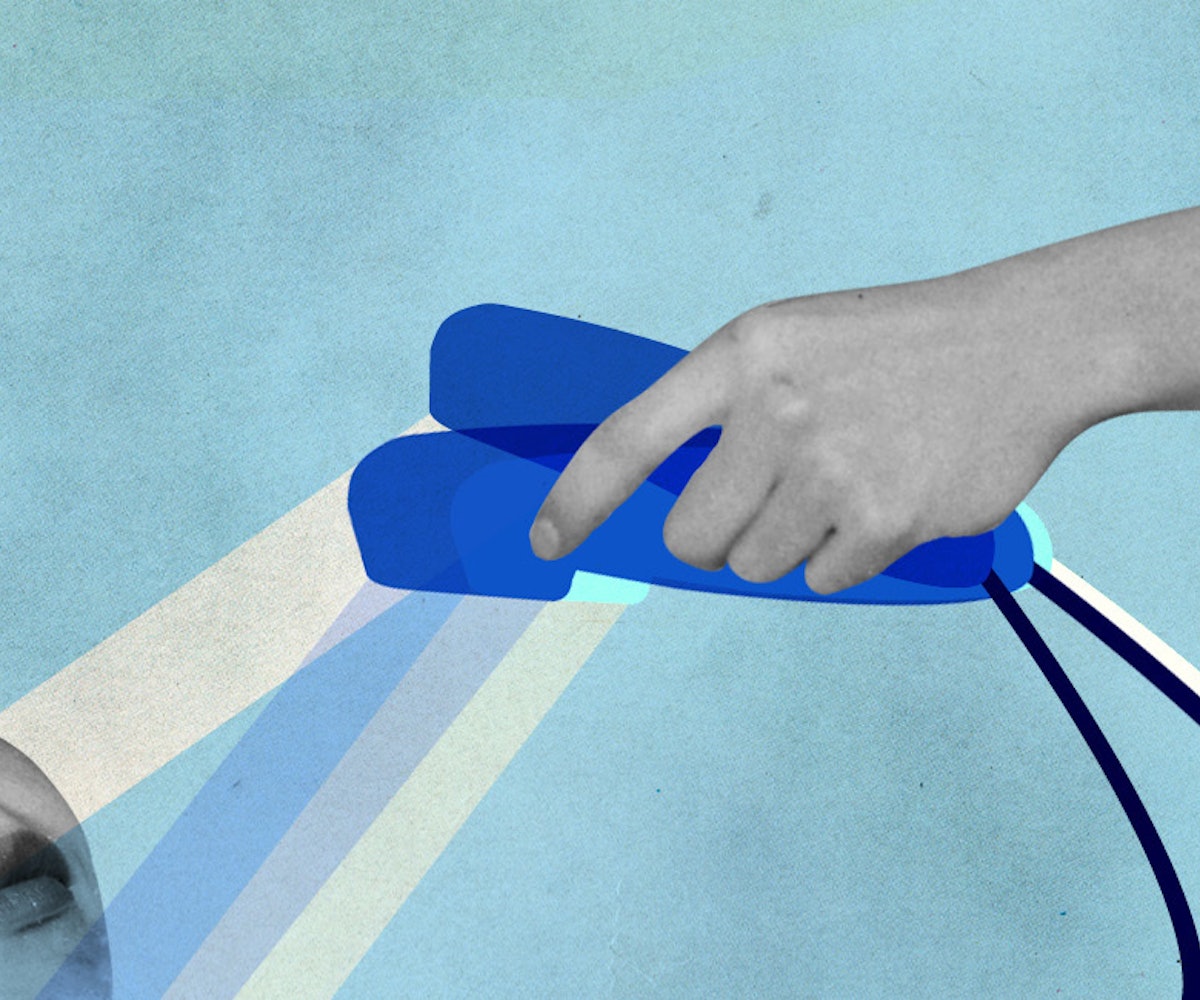 I’ve always been fairly hairy. My mom wouldn’t let me wax my caterpillar eyebrows until high school, but since they had a tendency to wiggle their way together, I just shaved them. In middle school, when I discovered it wasn’t exactly common for girls to have excess hair on their arms, I started shaving them, too. And then when a classmate asked me why I had hair growing along the side of my face, you guessed it, I took a razor to my sideburns. Eventually, I graduated to threading my eyebrows and stopped caring about the rest of my hair—age and general laziness will do that to you. It just stopped mattering to me. That is it had stopped. But then I discovered my first chin hair a couple of years ago.

Channeling my teenage self, I started by shaving only when it started to feel like the people I hovered over on the subway were glancing up at me more than usual. Then, I started the masochistic move of tweezing each individual hair. But still, they persisted. Unlike arm hair or leg hair or even sideburns, hair that grows on the chin can’t be conveniently covered up. And despite how minimal mine might have been compared to what others have, it still ended up being too, well, in your face for my taste. So, I looked into a more permanent solution: laser hair removal.

The biggest hesitation that people have when it comes to getting their hair lasered off is that it will hurt, says Shobha Tummala, founder of Shobha NYC where I went to get my service. It’s definitely intimidating. You walk into a room with a big, humming machine in the corner, a table set up in front of you, and you’re exposed to the kind of doctor's office lighting that seems to put every pore and blemish on full display. “You think it might hurt, you don’t know what, exactly, is going to happen to you,” Tummala says. “When you think of lasers, you think of cutting things or getting burned." That won’t—well, shouldn’t—happen, she assured me, especially if you have a consultation beforehand (if you go somewhere that doesn’t do one, that’s a red flag) and take the proper precautions.

During my first visit at Shobha, I filled out forms that inquired about my medical history and what products I use. It might seem excessive, if not invasive, but this information is important, because certain medications (like Accutane, which you can’t currently be using or have used in the six months prior to going in) can make you more photosensitive—which makes you more at risk of getting burned. The sun is also the biggest enemy to the laser, Shobha explains. Now is actually the best time of year to get laser hair removal if you live somewhere like New York City because the sun is pretty much in hibernation mode and you typically leave the house covered in head-to-toe clothing. But if you are planning to go away on a sun-filled vacation or get a spray tan beforehand, you should press pause on making an appointment. “Anything artificial on top of your skin that mimics color is going to attract the laser,” Shobha explains.

The type of laser being used is important to note as well. There are two kinds at the Shobha salon: Alex, which is used for those with lighter skin tones, and YAG, which is used for those with darker skin. This is definitely something you should inquire about before going in for your first session because, as Tummala explains, “The Alex laser is going to look for whatever color it can find and, because it’s for lighter skin types—who don’t have any melanin in their skin—whatever color it sees, it’s going to zap it first. You can never use it on someone who’s darker-skinned because then it’s going to zap your skin.” Whereas if you use the YAG on someone with lighter skin, it simply won’t be as effective. With that in mind, there are a handful of people who won’t benefit from getting laser hair removal of any kind done, Shobha notes. Since the process, essentially, involves targeting the color in your hair, it doesn’t typically work on people with light blonde, strawberry blonde, light red, gray, or white hair. If it can’t pick up on the pigment, it can’t get rid of it.

Now, once you’ve found a place you trust and your fears are assuaged, you’ll be relieved to know the actual process is pretty anticlimactic—and fast. From consultation to the actual lasering, my appointment probably lasted a little under 20 minutes. Granted, I was getting a fairly small area done—if you’re doing your legs or getting a Brazilian, it will take longer. But, for the most part, you’ll probably spend more time talking to your technician than you do getting zapped.

It works like this: After placing goggles on your face (to protect the eyes from the laser), the technician starts out by applying a gel to the area to keep it cool during the process (this is meant to help minimize pain). Then, cold air is applied to the area to help it cool down even more. The technician then should let you know what area they’re going to start working on, so you’re not taken off guard. Then, they’ll start zapping away. I won’t say it’s completely painless—I'd probably give it a four out of 10. It mostly feels like tiny rubber bands being plucked against your skin, which isn’t fun but also isn’t unbearable. As my technician, Arisa, said during our session: As soon as you start to think it’s hurting, you’re already done with that section.

Now, you might smell slight burning while the lasers being used, but that’s your hair being singed, not your skin. But that hair-burning smell shouldn't even happen, one reason it might is because you didn’t shave properly, which is a requirement before coming in. Seems counterintuitive to get rid of the hair yourself, right? According to Shobha: “The laser goes in and it targets the hair follicle, so you don’t want to waste that energy on the hair on top of the skin because it’s going to be less effective.” And the reason shaving is preferred over tweezing or waxing is because you still want the root intact. “You do need to root of the hair to kill it, and you’re essentially killing the blood supply and damaging the follicles, so, over time, it doesn’t grow anymore,” Shobha says.

Not every follicle is going to be killed off in the first or the second or even the third session. The average number of times you’ll need to come in is four to six for those with lighter skin and six to 10 for folks with darker skin. You'll need to visit the salon every four to six weeks to really see results, but the numbers will also vary depending on the area you’re getting done. According to Shobha, the underarm and bikini, where the hair is coarser, are usually easier, whereas the chin and lip are the most stubborn for women because they’re hormonal areas.

If you’re going through this time-consuming (and expensive) process, it's undoubtedly because you want your hair gone—permanently. And, for the most part, that is exactly what happens, but Shobha says there is a chance that you might see a couple of stray hairs even after your last session. “On average, you have about 300 hair follicles on every square inch of your body, they’re just not all active at the same time because, if they were, we would have fur all over our body,” she explains. “So, what happens is, we kill all the active ones during your laser sessions, but then during different times in your life, say if you’re having a baby or if you’re taking certain hormone medicines, that might stimulate some new hairs to grow.” Nothing that a touch-up can’t fix, she says. “It'll never be to the point where it probably was.”

Which is why it’s very important to think long and hard about whether laser hair removal is something you want to do—and especially about the area you’re getting done. You don’t want a Kim Kardashian baby hair debacle on your hands! Of course, not everyone is interested in living a hair-free life, and others may be turned off by the price (which Shobha notes has gone down in most salons recently due to the high demand for the procedure) or the commitment it takes to get it done. I just know, for me, my first thought after walking out of my session wasn’t, Will I regret this in 10 years? but rather, Why didn’t I do this sooner?