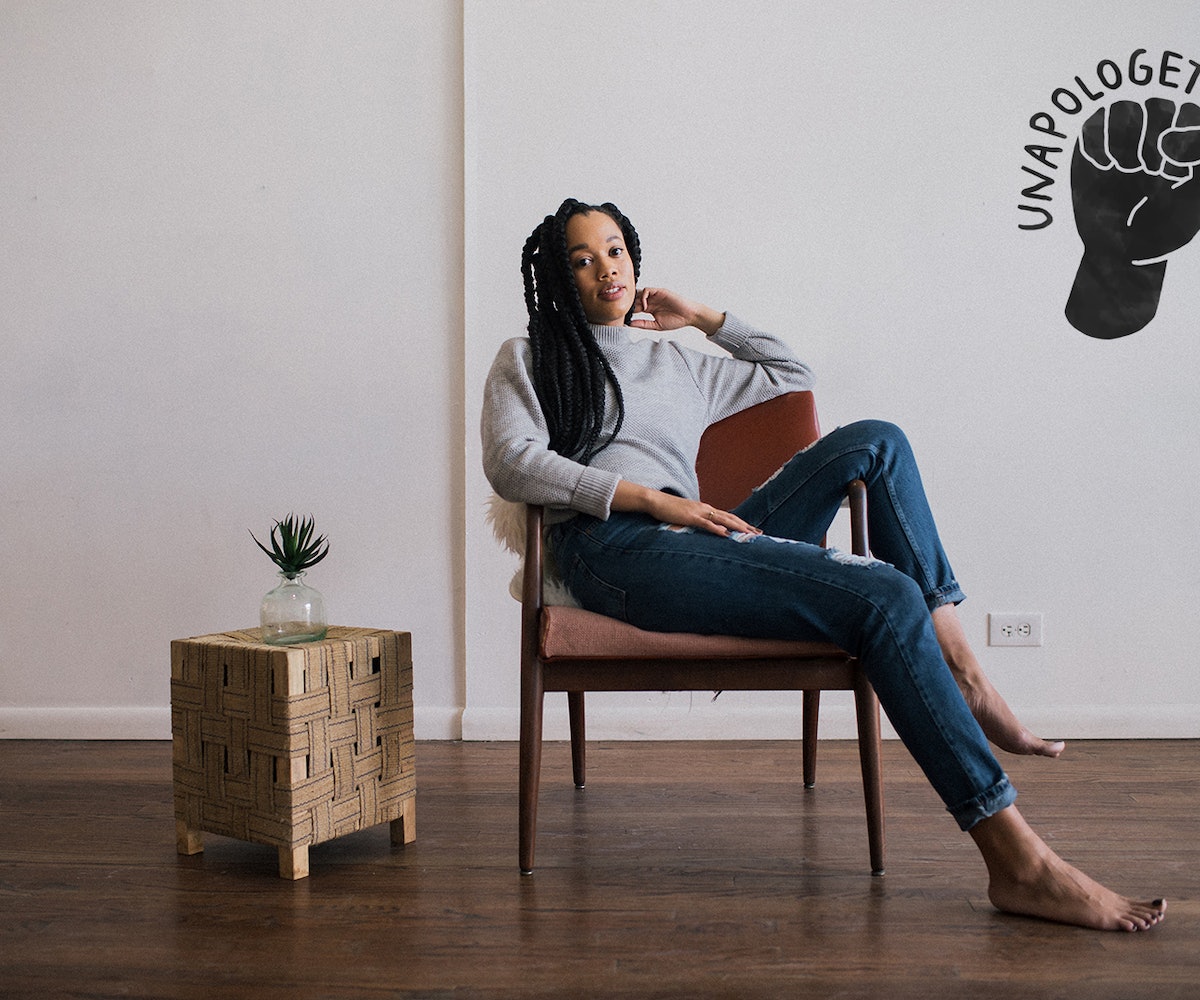 When you look at the wellness space, it’s hard not to notice the overwhelming whiteness in the atmosphere. Even though many of the practices associated with the wellness lifestyle come from a diversity of cultures, mainstream wellness has been troublingly white-washed, with everything from yoga to herbal medicines commercialized with a white veneer. Lauren Ash is determined to change this, though. The Chicago-based entrepreneur is the founder of Black Girl in Om, a space that “promotes holistic wellness and inner beauty for women of color.” Together, she and her dedicated co-workers encourage “self-care, self-love, and self-empowerment for communities of color.”

Additionally, Ash is also the co-founder of Ivory & Ash, a lifestyle brand that produces products emblazoned with affirmations and illustrations marketed toward contemporary women of color; founder of Party Noire, a dance party that celebrates #BlackJoy across the gender and sexuality spectrum; and member of Post Loudness, a podcast collective that prioritizes people of color, women, and the queer community. Ash is fully aware of the fact that women of color are “longing for more sources of self-care and wellness,” and she is on a mission to provide them with resources in multiple forms.

“I think it’s important—now more than ever—for us to take seriously the role of preventative self-care and preventative wellness,” she says. “I'm an advocate, in general, of people of color taking pause and really getting to know what is it that makes you feel sane, so that you're able to thrive rather than just merely survive."

Although she currently has the privilege of creating a path for herself and defining a career on her own terms, it took Ash a long time to reach this point in her life. The 20-something grew up in Woodbury, Minnesota, a suburb of Saint Paul. She describes her upbringing as that of a typical black girl living in a predominately white community but fondly remembers having a happy childhood.

Ash was always aware of the lack of color in her surroundings, but it wasn’t until she attended the University of Saint Thomas in Minnesota that she woke up to the reality of modern-day racism. Looking back on college, Ash remarks how her undergraduate experience was crucial to cultivating her passion for creating safe spaces for people of color. During Ash’s sophomore year as an RA, there were a series of racially motivated hate crimes committed on campus, including on the floor of the dorm that she lived in.

“There were these three black women who lived together a couple doors down from mine, and someone just kept on harassing them—everything from the N-word written in Sharpie on their door to death threats,” she says. “It was at that time that I really internalized racism and what it meant to be a black woman in the early 2000s.”

That experience sparked Ash's interest in exploring racism. She changed her major so she could investigate “prejudice and racism from the perspective of social psychology.” She also got involved with the university’s multicultural student services office as a way to become a leader, ally, and mentor to her peers on campus. Leading up to her graduation, Ash completed the McNair Scholars program which pushed her on the path toward earning a master's. Committing to this academic track eventually led Ash to the American Studies Masters program at Purdue University.

Ash spent her summers working at the Penumbra Theatre Company, a center that promotes the idea of “using art for social change” in the world. This environment sustained Ash’s passion for “everything from black art and culture to histories related to the black arts movement and black power movement.” It was during this time as a stressed out graduate student that Ash took an interest in yoga and wellness. This discipline became the best way for Ash to work through all the stress and tension in her life. Eventually, she purchased a yoga membership at a local studio and fell even more in love with it.

Ash slowly began incorporating different aspects of the practice on the mat into her everyday life, instilling deeper meaning into both her practice and her life. But even as yoga's importance grew for her, Ash couldn’t overlook the fact that the spaces she practiced in were overwhelmingly white. Ash began to focus more and more on “the importance of and value of blackness, and having access to specific spaces as black people.”

Ash moved back to Minneapolis after she graduated from Purdue and took on a supportive role at the Penumbra Theatre Company. “I wrote essays about the plays they were staging, and I helped prep and plan the next summer of working with the students,” she says. “I also worked doing youth development and supporting this really great after-school program for kids at the Wilder Foundation, this phenomenal foundation mostly focused on immigrant populations in Saint Paul. It was equal parts leadership development, cultural exchange, and service learning.”

Even though she could have stayed and cultivated a career in youth development, Ash couldn’t fight the feeling of wanting something more challenging on a personal and professional level. So off to Chicago Ash went. While Ash found what could have been an interesting job at a policy-focused organization with a mission to create legislation ensuring better workplaces for women and working families, Ash ended up hating every minute of it. The company's culture was not what she expected; her team consisted of “a bunch of middle-aged white feminists” who gave her the impression of not genuinely caring about the lives of black women.

But the silver lining of Ash’s growing disinterest in her job was that it fueled her interests outside of it. Despite having a few friends in the area, Ash still hadn’t found her niche community in Chicago, so she spent most of her time in a studio practicing yoga. Ash’s spontaneous decision to enroll in yoga teacher training wound up becoming a facilitator for the next stage of her journey. Ash realized that she wanted to create a space geared toward women of color that would connect them with yoga and wellness.

After sharing her ideas for Black Girl in Om with her friend R.J. Eldridge, he suggested that she meet with Janice Bond, a multidisciplinary curator, strategist, and advisor. It took Bond only one meeting to be convinced about the legitimacy of Black Girl in Om; she offered Ash her condo to use as a space for the yoga sessions and to grow her community.

Zakkiyyah Najeebah eventually joined on as art director and helped Ash shape her ideas around Black Girl in Om’s visual identity. Other collaborators, like writers and photographers, have also worked with Ash on her project, and Ash makes a point of hiring women of color, saying she wants them “to be represented beautifully through Black Girl in Om."

In terms of representation in the world of wellness, Ash thinks that things are improving. Black Girl in Om is currently in the process of launching a creative agency and working with brands to produce content that is “beautiful and authentic.” Ash says, “I think that it's just astonishing that you still look at advertisements and walk into a yoga space and will still be surprised if you see yourself represented. That is really crazy.”

Since Ash’s go-to methods of self-care include meditation and mindfulness, she knows how essential it is for all women—not just white and wealthy ones—to have the tools to step away from their stresses. “It’s amazing what literally taking five minutes of stillness and quiet can do for you,” she says. On the flip side, Ash also uses “dance and community engagement” as a form of healing. More than anything, she emphasizes the importance of “preventative self-care,” especially for women of color in the working class who “don't necessarily have insurance or access to support in terms of wellness and mental health.”

“Don't wait until you're feeling out of your mind in order to invest in yourself because that's sometimes what we do out of necessity,” she adds. “As much as possible, we have to not let that happen because we are about to head into intense times. This is about to be intense in ways that we can foresee and in ways that we can't.” Luckily, then, we have people like Ash around, who can help provide as much relief as possible from the troubled times ahead.