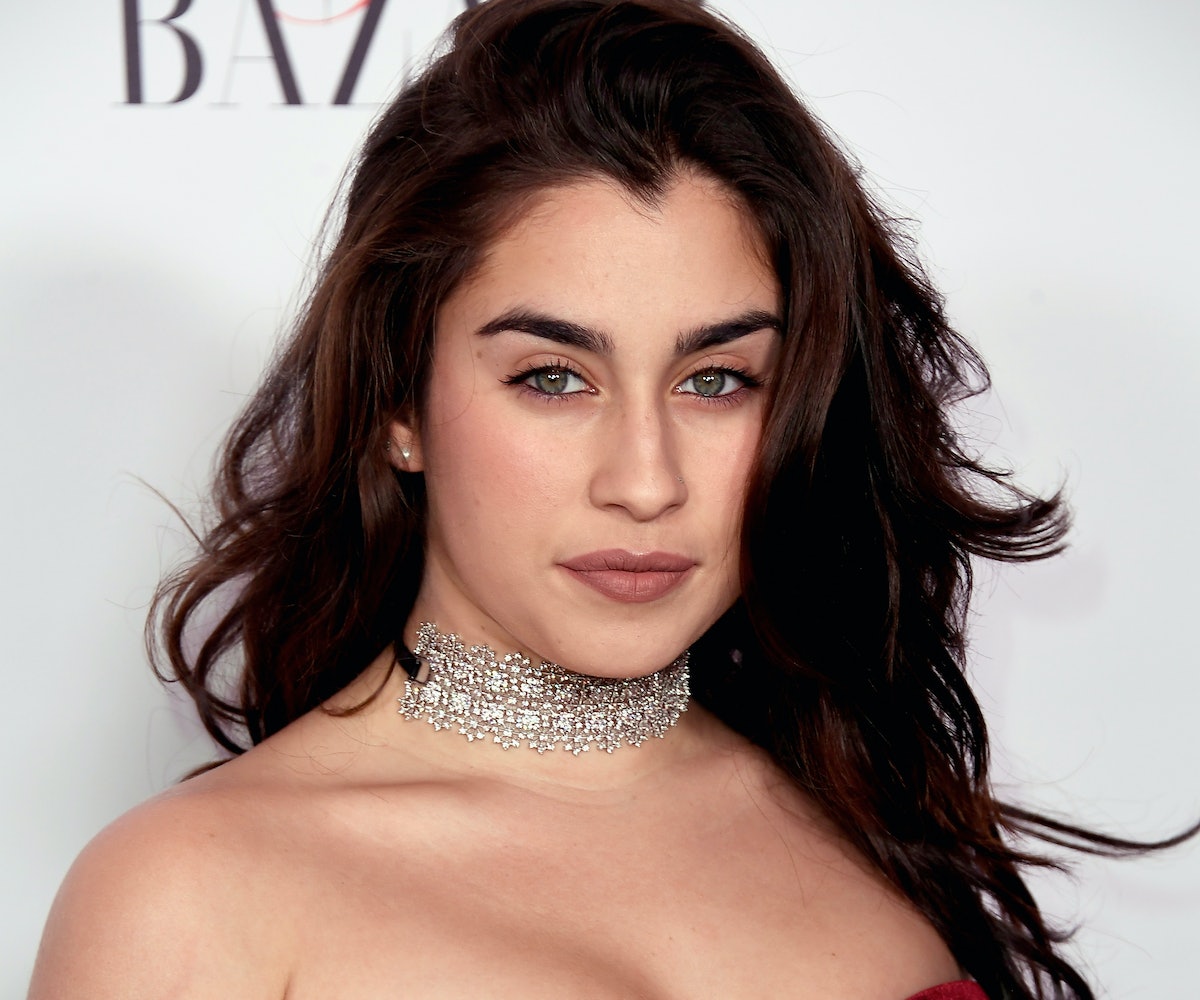 Every day, more and more celebrities are coming forward to express their views in this heated political climate. One person who has been using her voice to great effect for some time now is Fifth Harmony member Lauren Jauregui, with whom we spoke at the historic Women's March on Washington. Since the protest, the pop star has published an open letter in opposition to the Muslim ban recently ordered by President Trump.

In the note, Jauregui addresses the state of the refugee crisis, this country's need for immigrants, and the historical fight for liberation from oppression. She writes:

This country was built and continues to survive off the backs of immigrants and refugees. The term refugee in itself is such a significant word. These people are not terrorists: Many are escaping wars that we created in their lands. The only terrorism that both history and I have experienced has been at the hands of powerful White men who are willing to systematically kill and conquer without an ounce of empathy for anything but their pockets.

From there, she calls out older generations for blindly choosing this as the future of America. Jauregui wraps it up by encouraging the youth to fight back and stop allowing ourselves to be "enslaved to the man." The singer-songwriter has also been very vocal about her views on Instagram, the platform where she originally mentioned her interest in writing this piece.

"This unconstitutional administration and their executive orders cannot silence us," she stated. "We are strong United and we ARE the people, all of us are humans of the earth. No one deserves to feel ostracized for seeking refuge from war, practicing a certain religion, or because of the specific "terror prone" countries they are fleeing from."

In 1492 some Spanish conquistadors who were looking to expand their empire sailed over here and enslaved and murdered the Indigenous people who inhabited and took care of their beautiful Americas, both North and South. In 1620, European Christian separatists escaping religious persecution sailed here and started up their colonies by doing the same.

“O beautiful for spacious skies / For amber waves of grain / For purple mountain majesties above the fruited plain / America, America, God shed His Grace on thee / And crown thy good with brotherhood / From sea to shining sea.” Everything you’ve been taught, everything you know, this nationalism you’ve had instilled in you since you were born here or came here, is all a sham. When we all start to wake up and realize that our comforts are fleeting and more money is never going to save this world, maybe, just maybe, will we be able to return back to the grace of America’s principle values.

Those stripes are supposed to symbolize the brutal blood of a fight for liberation from oppression when really it was all seemingly for a few men’s legacy of conquer and power. There is no patriotism for this flag without a belief in those Constitutional Rights that were adopted from the Iroquois constitution.

This country was built and continues to survive off the backs of immigrants and refugees. The term refugee in itself is such a significant word. These people are not terrorists: Many are escaping wars that we created in their lands. To tell another human being that the disastrous tortures of war are not important and to then go even a step further and insult their plight for freedom by labeling them “terrorists” is just disrespectful to humanity. The only terrorism that both history and I have experienced has been at the hands of powerful White men who are willing to systematically kill and conquer without an ounce of empathy for anything but their pockets.

We have to realize how important this time is. My young people who understand and did not choose this for their future, the older generation who blindly chose to take this comfortable future we all envisioned away: We have never known war, we have never known the pain of discomfort, we have been privileged and promised into our moral oblivion.

We’ve digressed from the true meaning of life. We have replaced the Creator with money and claim Him in the name of war. We have dishonored our children. We have murdered and systematically imprisoned and slaughtered and devalued and drugged up the majority. We have destroyed our Mother Earth. We have enslaved ourselves to the man, and we’re not even bothered by our consequences.

If you are going to these protests, if you need health insurance for yourself or a sick loved one, if you are a woman, if you are a person of color, if you are disabled, if you practice any sort of religion, if you care about hte air you breathe and the water you drink, if you showed up to that women’s march in whatever city or state or country or town you came from, you need to fight back. We need to come together and let this administration know that we are not going to stand for another Nazi Germany or Stalin Russia or Mao Zedong China. The list is endless in the course of history, and it all happens the exact same way. The phrase history repeats itself is not a cliché for free.

Please heed the danger and the warning and blessing that we still live in a country where the founding principles that these Republicans swear to uphold are still protected by some. These empty promises, these dangerous executive orders, this obsession with money — we will not be able to drink oil or eat dirty, blood-wrung green paper and nickel. Please, please listen.

Check out the IPJC.org and ACLU.org and take action in a community near you. We cannot afford woke tweets and Instagram posts alone. We need action. Take your future back into your hands.