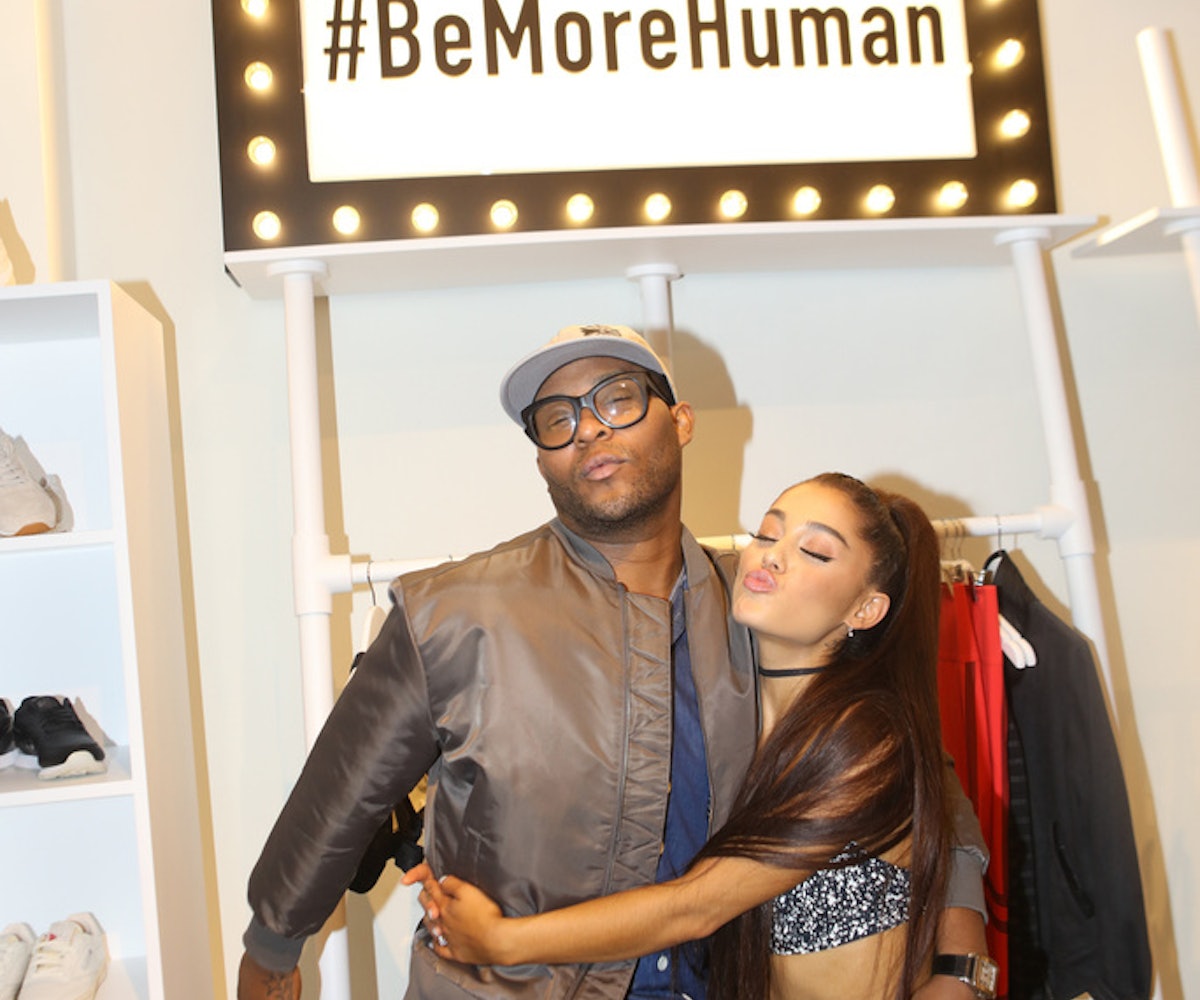 Over the past couple of months, stylist Law Roach has probably become best known for transforming Celine Dion from a singing icon into a fashion mogul. It seemed like, virtually overnight, Dion was being photographed in couture looks, while sitting front row in Paris, and seen starring in quirky videos for Vogue. Don’t call it a comeback, but also give credit to the man behind the looks.

Roach, who likes to refer to himself as an “image architect,” first started working with Dion after the singer witnessed his impressive transformation of Zendaya. And while these two stars are probably the clients he’s most known for (or, at least, the ones the press has been focused on lately), he’s also worked with Ariana Grande for the past two years.

It’s weird when Grande is only mentioned in passing, but maybe it’s because, unlike Dion or Zendaya, the pop star has a very specific look that she rarely deviates from—think: oversize sweatshirts worn with no pants, thigh-high boots, a very long ponytail. She knows what she likes (“weird and quirky and bizarre” is how she likes to describe it), and Law helps to amplify that by bringing it to, what Grande likes to call, a “Law place.” Also, Grande is a private person. You’re not going to see her on red carpets or out on the town during fashion month. So her concerts are where Law’s touch is really displayed.

And dressing someone for a tour (Law was behind a bulk of the looks for the singer’s Dangerous Woman tour) is a lot different than a glitzy event. Both require research, he tells us this week during a Reebok event with Grande (who's the brand's new ambassador), but the former is a lot more technical. “You go through a round of sketches, and then you actually get the garments produced. It’s funny because then you fit them, and then you take them back, and you make them functional for stage,” he tells us. “There’s this amazing thing called a quick change, so she has to be able to get out of one [outfit] and into another in, I think, like 90 seconds.”

This is made a little easier by adding zippers and Velcro where possible. “And things have to have mic packs, and accessories are actually constructed into the garment,” he says. “Like, in the beginning of the show, you’ll see her first number—she wears this huge rhinestone choker, and that’s actually sewn onto the bodysuit.”

That rhinestone choker look, which is attached to an all-black number that Grande later on paired with an oversized bomber, is outfit one of five from her tour. Number two finds Grande in a pair of white utilitarian pants, a white crop top, and a white jacket that, when I saw her, she wears with one arm in the sleeve and one out. Outfit three is an all-gray cropped bra and mini skirt. Number four is a baggy brown jumpsuit with a moon embroidered on the front and a white stripe down the side. The final number—the clear standout and Roach’s favorite—is a black patent leather ball gown trench coat. Each ensemble is different and paired with its own set of sky-high, thigh-high, six-inch boots. It's probably worth mentioning that the concert goes on for two hours.

Each costume also has an air of sophistication about it. Especially the last one, which Grande wore while singing “Dangerous Woman.” Roach tells us that he wanted to style Grande in silhouettes her fans are used to seeing, but add a dose of maturity to them. “I wanted to show her growth as a woman from her last tour,” he says. “You have to think that your fans are growing with you, so they aren’t in the same place they were two years ago. And so your fashion and the way you present yourself shouldn’t be, either. That was what was important for us as we collaborated and started the process. And it’s called Dangerous Woman, you know? It should feel a little bit more ‘woman.’”

As for Roach’s own personal journey, he wants to start focusing on giving back. He’s accomplished a lot this year, including becoming the first black stylist to be featured on the cover of The Hollywood Reporter’s Stylists & Stars issue this past March. He was shown with Dion and Zendaya. “Right now, in my life and in my career as a stylist, I’ve done everything that I want to do. All the goals and all the dreams I had, came true, so now, I feel like everything I do is to inspire other people who look like me and who’ve come from the same places I’ve come from and who shared the same struggles,” he tells us. “Anytime your work can have a positive effect on another human being, it’s always amazing, so I’m very, very proud of that.”

As for advice he has for young up-and-coming stylists, he recommends learning as much as you can from your idols. “I think what [people] should do is find someone whose work you look up to and someone who you wanna pattern your career after, and try to intern with them and work for them and get as much knowledge about the industry as possible. It really helps, and you make less mistakes. I made a lot of mistakes in my career because I was trying to figure it out [on my own]—and thank god, I figured it out really fast!—but had I had other people’s structure and process to compare it to, it would’ve been a lot easier.”