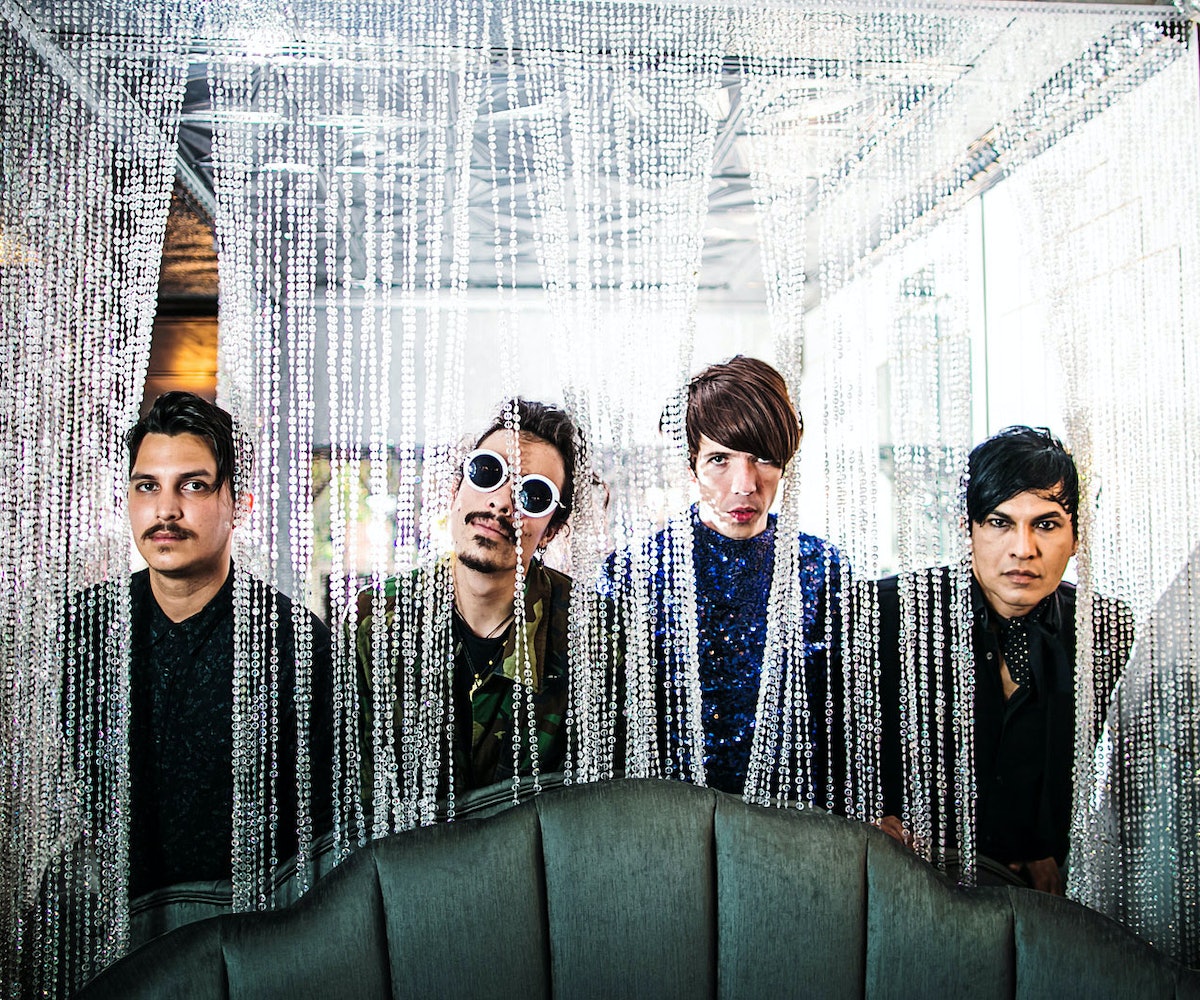 At once anthemic and accessible, jangly and ethereal, Lazy Queen crafts an expertly blended atmosphere that satiates our love of shoegaze and punk alike. Based in Bushwick, but bred from all around the world, the international foursome recently released their debut Drift EP. We chatted with lead singer, Henrik, who has a penchant for dangerously throwing himself down stage steps during the band's exhilarating live performances.

Your band mates hail from all over the world. How did you come together?

Well, we all moved here for different reasons and at different times. Reyson and I met while cruising the Internet for people to play music with. We got very drunk together the first time we met up and haven’t stopped drinking (and occasionally making music) together since. We started out recording in Reyson’s bedroom and eventually found ourselves in need of a band to play the songs live. So Reyson brought in his friend Julian, and after having burnt through an array of drummers, the Craigslist Gods bestowed upon us Joel.

How do your international roots feed into your music?

Julian is Puerto Rican, Reyson is Dominican-Chinese raised in Puerto Rico, Joel is a Midwestern American with Norwegian roots, and I’m an adopted Colombian raised in Norway. Together we become a cacophony of Norwegian pragmatism and Latino passion. I think most of all, it just allows us to trash talk each other in languages nobody understands—it maintains our group harmony.

Your band name conveys some wonderfully quirky imagery, what inspired it?

It was originally inspired by the lyrics of a Pixies song, but it has in many ways come to create its own meaning. When I first told my friends, they all pretty much responded “Aaah! That makes sense...you ARE a lazy queen!” I’m not sure how to feel about that.

Tell us about your debut EP! What inspired its genesis?

and it’s being released on the wonderful Pacific Trash Records out of Seattle. It’s an accumulation of songs we’ve been working on since late last winter. One of the songs, "Lesion," was the first song we ever wrote with the full band present. It’s been an adventure exploring the darker, noisier, tenser elements of our sound and lyricism, because our music will always be closely connected to the flows of our personal lives. When we came together we were very much going through the motions in our own lives, so the band and the music became a place to store and process all that shit.

How does the creative process begin for the four of you?

Reyson and I will usually get together and work on ideas before bringing them before the rest of the band to be fleshed out. Once it’s more put together, I’ll transition from mumbling

incoherently into the mic to writing actual lyrics. Although, I must admit I rarely finish them until right before we are about to record. Essentially, the structure and melody of the songs will usually start with Reyson and I, but it doesn’t sound like Lazy Queen until the four of us are in a room together.

Where did you record your EP? How did that contribute to the final product?

We recorded it at 1989 Recordings at Silent Barn in Bushwick. We set out to try to transfer our live energy to the recordings, so we recorded it live for the most part, with all of us playing at the same time. For pretty much every track, Reyson and I would record a track of guitar noise and feedback for texture, and after the vocals had been dubbed that was pretty much it. We’ve been working with home recordings up until this point, and it was liberating to be able to focus less on the technical side and more on the music and performance.

If you were forced to define your music, how would you describe it?

Psych-shoegaze-garage-noir-pop-German-expressionist-kitten-tango-rock with a twist of lime.

You’ve been known to sometimes perform in drag—how does that factor into your band’s message?

I’m not trying to make some big statement. It’s been my own exploration with self-expression. And there are so many people with so many beautiful and daring forms of self-expression, especially here in New York, who have inspired me to do the same. I guess it’s an encouragement to stop giving too much power to the opinions and judgment of those around you and start using that power for yourself.