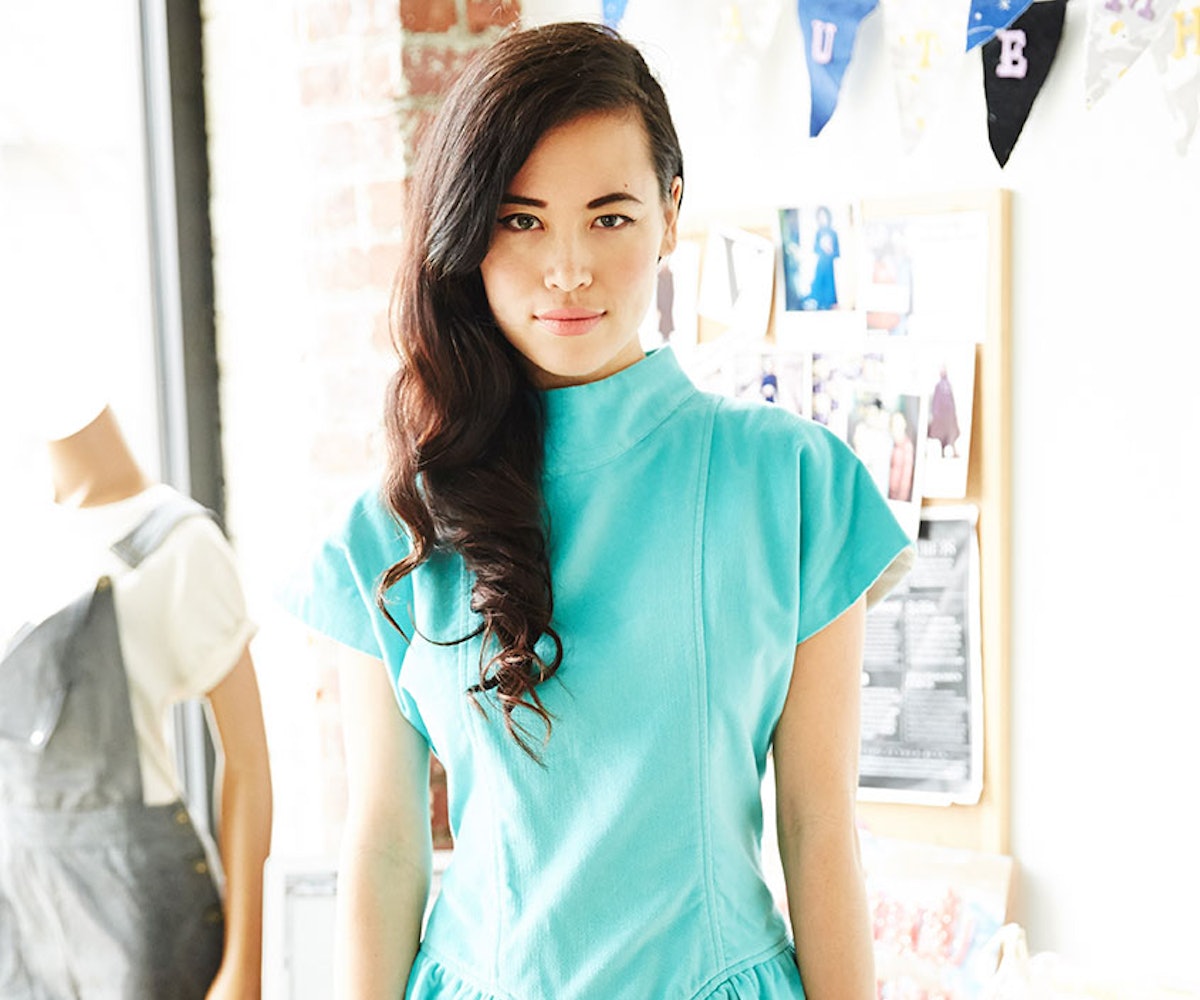 Leanne Mai-ly Hilgart is the CEO & Creative Director of Vaute Couture, the world’s first completely vegan apparel label. While other fashion brands occasionally sell vegetarian-friendly clothes out of materials like faux-leather, Vaute doesn’t use anything derived from animals—you won’t find silk, wool, suede, or down in the line, even in its super-warm jackets. In 2013, Vaute became the first vegan brand to show at New York Fashion Week. And thanks to a rapidly growing, loyal customer base, the company just opened a new headquarters in Brooklyn, and is in the process of opening a new storefront in Nolita.

At 32, Hilgart radiates with contagious excitement and a quiet yet unmistakable confidence. This is a woman who figured out how to combine her passions—animal rights and fashion—and turn them into something lucrative, lasting, and impactful, with no previous experience being a business owner or fashion designer. She’s modest and gracious in conversation, but her incredible accomplishments speak to the fact that this risk-taker had the drive and wherewithal to succeed despite the odds being stacked against her.

“I realized that all the most important things I did in life I did without asking for approval or permission,” Hilgart says. “I knew I had to just do it and prove it, and maybe one day they would get it, but it wouldn’t matter, I had to create this; it had to be done. And that was that.”

Read on for her story of risk and reward, photographed in and around Vaute's new headquarters (oh, and if you're wondering—everything Hilgart's wearing is from Vaute.)

Born in Darien, Illinois, a suburb of Chicago (“10 minutes from the McDonalds HQ”), Hilgart graduated college with a degree in education and had, to her surprise, gotten signed to Ford Models. (She’s 5’5”, which is short for a model, but one look at her face and it’s not hard to see why.)

Hilgart was modeling in Chicago and Asia while doing marketing for a company called Sittercity and working on animal-rights activism on the side when she had her aha moment, thanks to the female CEO of Sittercity. She “was young, and I realized she was still making a huge impact for women in America,” Hilgart recalls. “That’s when I knew I had to start a business—that was how I’d create the most change in this world.”

She continues, “As an activist my whole life, I always wanted to figure out how to be the most effective. In a business, every element of the process can do good or bad, and that would have an exponential impact on the world versus what I could do alone.” And so Hilgart decided to launch her own business—one that would take animals out of the equation.

“Living beings aren’t machines and they shouldn’t be treated and cost-analyzed as such,” she says. But, there was one problem: “I had no idea what my business should be, nor did I have any experience in any one industry.”

So, Hilgart did what any responsible, ultra-motivated person would do when faced with a business challenge: She decided to get her MBA. Then, while spending the summer in Hong Kong modeling, at a time when she needed to take a few more classes to graduate, she realized what her plan would be. “I was thinking through every business idea I had thrown out. One was for vegan outerwear.” Though she originally thought that there’d be no market for something like that, it suddenly occurred to her that the market wasn’t the issue: “If I look at this as an opportunity to innovate textiles so that it doesn’t matter if you care about animals as much as I do, you just want a warm pretty coat, then the market is endless,” she explains. “And then I could empower and enlist these women who have never thought about the power of their daily choices of what they wear, eat, and buy to start making a difference.”

Hilgart abruptly quit DePaul’s MBA program and terminated her modeling contract. She put her life savings into the company, “without even knowing how to really sew or ever setting foot in a factory or fashion school.” She began to work 80 hours a week to develop the brand. “Those were lonely, scary months, and there were many more to follow,” she says.

That terrifying loneliness was familiar. When, at ten years old, Hilgart first got into animal rights and social justice issues, she went from being popular to being ignored, spending many nights in tears. “But while I ran letter writing campaigns and called beauty companies that tested on animals with a list of questions until the customer service agent asked angrily how old I was,” she says, “I was becoming comfortable being disliked, misunderstood, and unpopular, and following my heart anyway.”