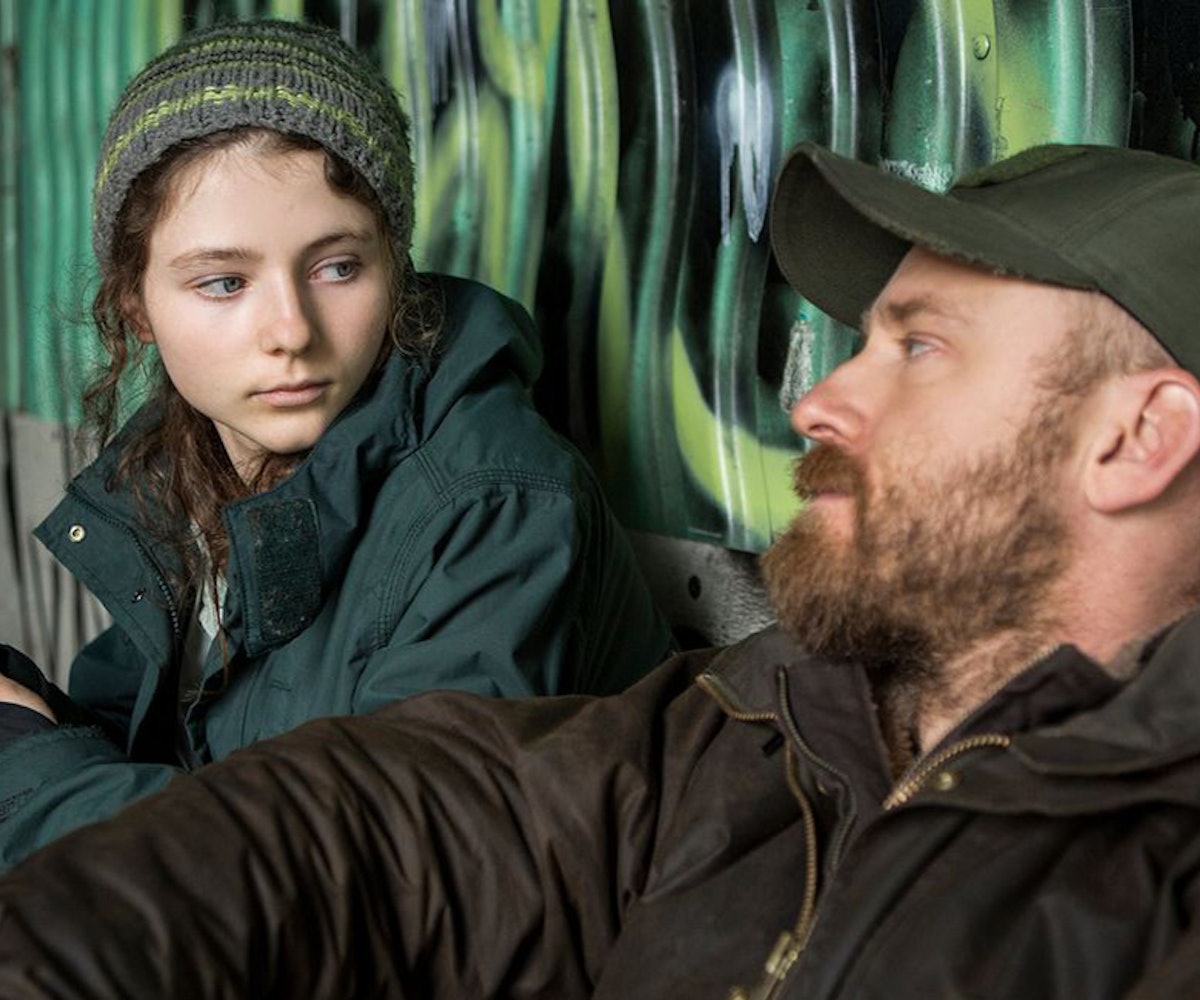 People on both the left and right sometimes like to assume that culture-makers all live in a bubble—which ignores how many people on the coasts arrived there from somewhere else, as well as the outward-directed gaze of filmmakers like Debra Granik. Over the past decade, Granik has been a unique voice out at the tattered fringes of white America, in grid-adjacent places scarred by wars and addictions. Her tactile portraits are more empathetic than politically binary, and they take on an imaginative lift by considering where, within this world, gifted young women might fit in—or how they might get out. Leave No Trace is a story about a girl growing up and leaving home—it’s just that “home” is no fixed address, it’s wherever her dad is, and her dad is a veteran whose PTSD and paranoia has found them sleeping under a tarp in a forest, buying groceries with money from selling the pills he gets from the VA.

In Granik’s best-known film, the meth-country neo-noir Winter’s Bone, teenaged protagonist Ree Dolly’s intelligence and determination was underscored by the waxing star power of the young Jennifer Lawrence, and channeled into the role of heroine in a hardboiled thriller, one set in the backwoods instead of an underworld, in an Appalachian community erasing itself with drugs on the cusp of the opiate crisis. That was eight years ago, Granik’s last fiction film until now; in between, her documentary Stray Dog profiled a grizzled Vietnam veteran—a first-time actor in Stray Dog—who runs a Missouri trailer park and spends his days on his chopper or counseling a new generation of walking wounded. It’s got a gnarly yet tender vibe, and an understanding of makeshift communities running on the spontaneous charity of people who’ve slipped through the holes in our patchworked safety net, or wriggled free of it out of pride.

Leave No Trace contains traces of both films, beginning with its title, and its suggestion of the invisibility by which Tom (Thomasin Harcourt McKenzie) and her dad (Ben Foster) move through the world. As the film begins, they’re living in the lush and rainy Pacific Northwest, though this Eden also has room for duct tape and propane, picked up on grocery runs which are clearly as far into society as Dad is comfortable going. Foster is an actor who can be unwatchably twitchy; here, he’s bottled up, and the visible technical effort in his performance works for a character who’s always drilling his daughter on survival skills and training her to evade capture.

This is plainly pathological behavior, which makes it all the more ironic when the two are indeed arrested. Once absorbed within the social services bureaucracy, Tom is told that “it’s not a crime to be unhoused,” but that it is “illegal to live on public land.” (Hmm!) As the system hovers about them, Tom’s father reminds her that “we can still think our own thoughts”; her growing realization that his thoughts are his prison perhaps spurs her desire for socialization.

Tom’s age is ambiguous (McKenzie was born in 2000, but her voice here is girlish and tentative), and nothing about her coming-of-age seems especially feminine—perhaps because of the gender-indifferent way her father has raised her, perhaps because she’s not been forced to self-sort among other boys and girls. She’s old enough, anyway, to run up against the limits of the kind of person she can be without other people’s experiences to soak up. Unlike her father, Tom is genuinely self-sufficient, in that she has intellectual curiosity and inner strength to go along with her hands-on skills. She’s a star in the making, like a real-life Ree Dolly, with energy and intuition manifesting not as the traits of a Strong Female Character, but of a young person who hasn’t remotely hit her ceiling yet. It’s exhilarating to watch her in unself-conscious early-life skill-acquisition mode, interacting with the local 4-H club, or a beekeeper, or the ribbon dancer performing at a local church(!), so starving for the world you worry that she’ll gorge herself on the appetizer course.

The film ends back in the woods, in a new location that’s essentially Granik’s vision of America, a Stray Dog-like trailer park populated with wizened retirees, vets in faded baseball caps, unhip young hippies, and RV racers, all of whom pitch in to help with each other’s grocery bills, and sometimes gather around the grill to trade tunes on an acoustic guitar. It’s not aesthetically pastoral, or especially eco-conscious, but it’s just isolated enough for the damaged or congenitally independent-minded at the lower end of the economic spectrum. It’s a community based around an ethos of out-of-pocket generosity rather than a social safety net—I’d say “compassionate conservativism,” but the politics are, appropriately for Granik, more complicated than that. And someday, friends and colleagues who thought they knew Tom pretty well will be surprised to hear her talk about where she grew up, and be impressed that she knows how to start a fire without matches.