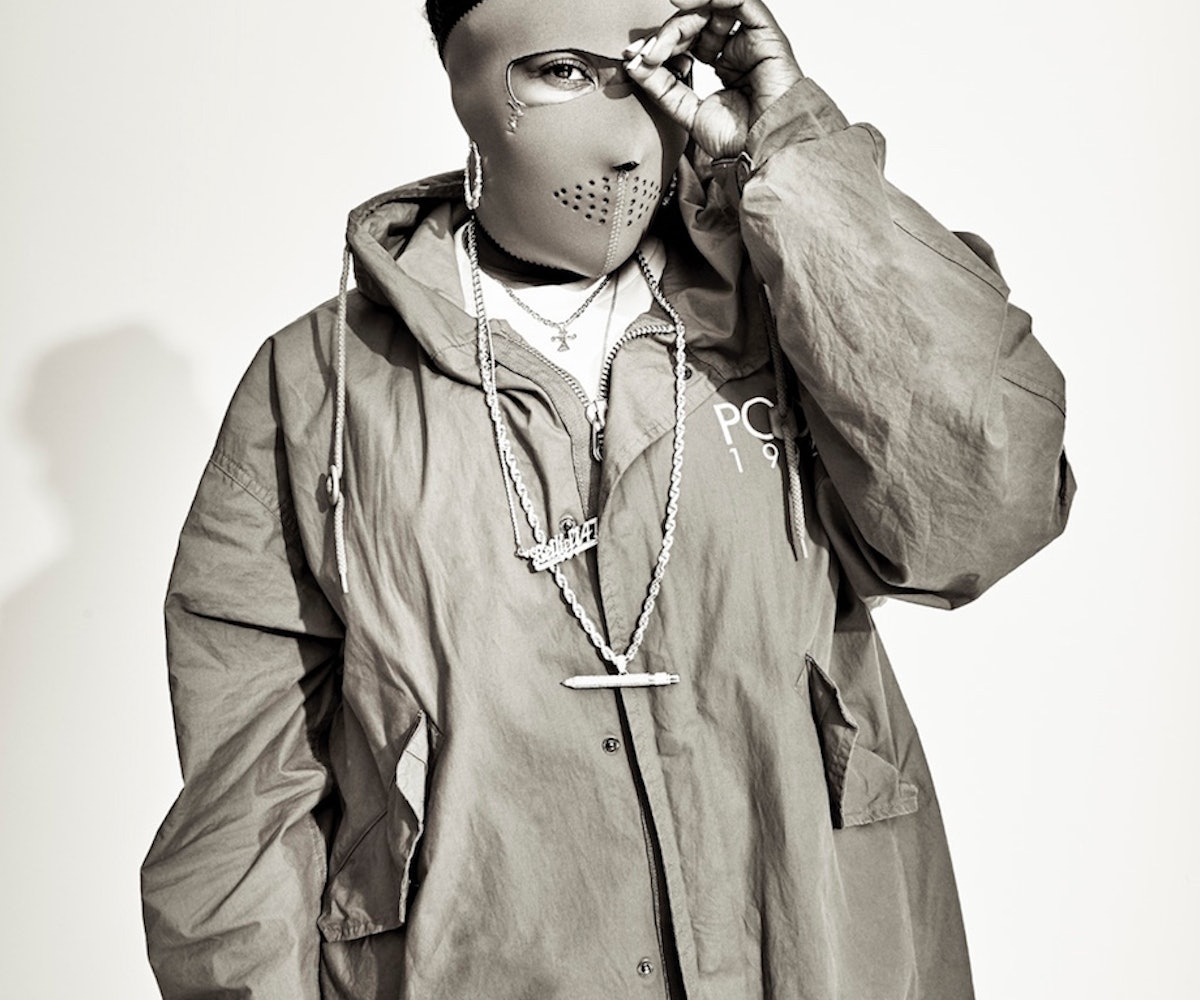 To say that Brooklyn's Leikeli47 is an "artist to watch" is a bit of an understatement. When you first see the multi-talented musician decked out in a colorful ski mask, you can't look away—but when you hear her, you won't be able to stop listening. It almost feels like she awakens something ferocious inside of you. Last month, Leikeli47 made her television debut alongside Baauer to perform "Day Ones" on The Late Show with Stephen Colbert. (The single was also featured in one of Budweiser’s Super Bowl 50 commercials.) A few weeks ago, she shared the stage with Santigold and Salt-N-Pepa for Milk Makeup's launch party—the brand's official campaign even features Leikeli47's "Two Times a Charm." As if that doesn't already impress you, some of her biggest fans in the industry are Jay Z, Alexander Wang, Skrillex, and Diplo. (Casual, we know.)

Today, we're honored to premiere Leikeli47's first music video for "Bitch Switch," a mode that she says everyone has. The track comes off her Lk-47 Part III mixtape that was released back in November. (Prior to that, she dropped her debut self-titled EP this past April.) The colorful and highly saturated visual follows the self-described communicator and her fierce girl gang which includes Bre Scullark—a model, yogi, and ANTM alumni. Generally speaking though, the song is about "celebrating love and life while giving a warning to opposers." (Hence the repetitive line "don't fuck with me.")

After you get a taste of what it's like to be in Leikeli47's world, get to know her more in the interview, below!

What's your background in music? When did you first start writing raps?

I've been practicing and creating sounds all my life. I call it communicating. It's like I'm holding a conversation with my friends (the listeners). I've been communicating for as long as I can remember.

New York is a magical place. Coming up was and still is very fun. With imagination, one train ride can be like traveling the world. So many beautiful people from all walks of life, all stuffed in one car. You can learn a lot.

How did you link up with Jay Z, Alexander Wang, Diplo, and Skrillex?

We linked through the music. I don't know most of them. Thats the power of music and dance. I have a lot of respect for those guys and I truly appreciate them for showing love. I'm humbled.

You recently dropped your Lk-47 Part III mixtape. What was the process of putting all of that together?

My only process is to sell out to the moment. If it feels good then that's the one.

What inspires you musically?

A walk to the store. Perspective. Malcolm X Boulevard. A good day. A bad day. Everything.

It seems like you keep up with the fashion scene. How would you describe your style?

My style is easy, I don't think about it at all. Whatever I feel like wearing, I wear it. I don't think I'm the best dressed, nor do I care to be. I like what I like, you know. I'm a girly tomboy so I love my sweats, nikes, and Milk Makeup, on and off the stage. The pieces I wear I've owned forever. When I adore something I hold on to it, like my music. To each their own.

What's with the ski masks?! (And in general, you being so discreet about your real identity?)

To keep the focus on my music. I don't talk much. Therefore, I like to speak through my music. You can't say I mask or hide my identity/selfhood because I tell you who I am in my music. Now some people may wonder how I look, and thats fine, but that's also none of their business. I'm here to entertain.

What is the one thing you want listeners to know about you from the jump?

To know that I truly appreciate each and every single one of them.

What's next for Leikeli47?! When can we expect your next project? A debut album? Another EP?

It's whatever God has ordered for me. I'm in the studio now, having a blast. Expect a great time from my next project and lots of fun. In the meantime, go take in Lk-47 Part III at an ignorant sound level when you get a chance. Thank you.