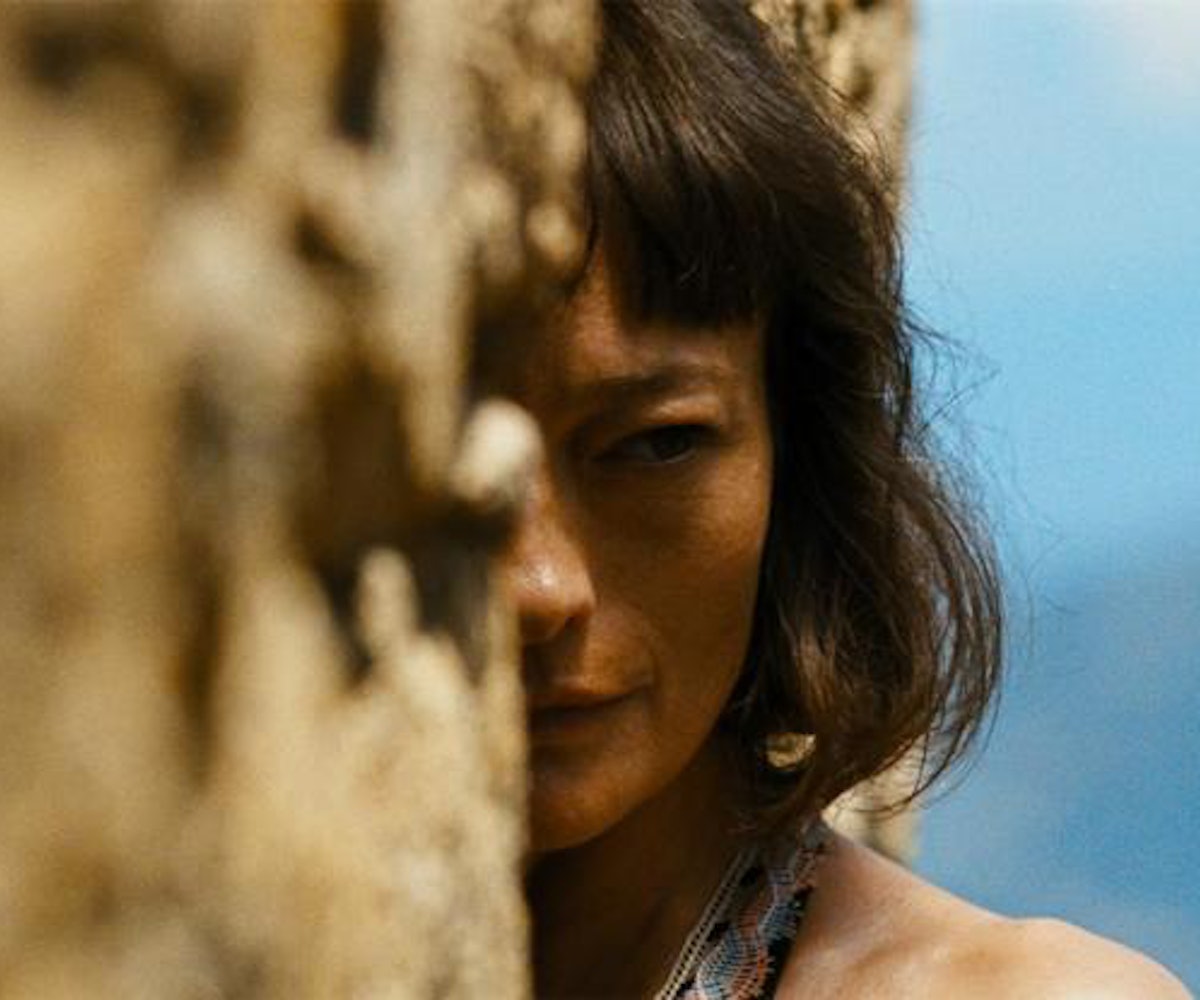 They don’t make ‘em like they used to, but Hélène Cattet and Bruno Forzani are closer than most, to doing just that. You can see it in the black leather, zoomed in on pornographically and stretched with such sensuously minute detail that the sound effect grows into a full score in some scenes. It’s in the color, their unnatural luminescent reds and radioactive greens and laser-ice blues. It’s in the very texture of their images, the grain that harkens back to the disreputable shoestring-budgeted gems synonymous with ‘70s B-cinema.

The French husband-and-wife directorial team makes films that feel like missives from a different era, when the battle lines between the grindhouse and the arthouse were a little more rigidly demarcated. They’ve benefitted from a modern film culture that’s welcomed the lurid and outré into the uppermost echelons of critical esteem, and while they’re all too glad to profess and discuss their influences, they want one thing to be clear: They’re not mimics.

“For us, it’s not pastiche or homage,” Forzani tells us on a sunny afternoon during the Toronto International Film Festival. “Because we play with colors, with a certain cinematic vocabulary, people think this. But we try to do something visceral, something original. We are big film watchers, we’ve been transported as audiences by different types of movies, we’re impregnated by them. And so we have a sort of fake memory sometimes, imagining things that don’t exist in movies we’ve seen. When we make a new feature, we watch movies—Western movies, in this instance—just to be sure we’re not doing something that’s been done before.”

The fake memory Forzani mentions is a canny analogy for the spellbinding effect their work has on viewers keyed into their esoteric set of reference points. Their films—2009’s horrific fever dream Amer, the short film O Is for Orgasm bundled in anthology The ABCs of Death, 2013’s oneiric The Strange Color of Your Body’s Tears, and the new psychedelic Western Let the Corpses Tan—imagine the history of low-rent exploitation film as it could have been rather than as it was. By investing the tradition of the Italian slasher-flick sub-genre, known as giallo, with a newfound visual sophistication, they follow through on the promise of such early pioneers as their idol, Dario Argento.

Forzani and Cattet first met in 2000 as students nearing the end of their education in Brussels, gravitating toward one another both creatively and romantically. Forzani showed her Argento’s Deep Red, and she found herself instantly smitten with the same aesthetic of surrealistic sleaze that had already enchanted him. (“I was, wow, totally amazed,” she says. “It felt like a new planet.”) By Forzani’s count, they began production on their earliest joint project exactly one month after becoming lovers.

They’ll concede that the husband-wife dynamic is one of the major keys to their success, but scoff at the notion that the sexual charge from their marriage has fueled their films’ irrepressible erotic streak. (Though they’ve heard accounts of couples watching Amer as foreplay, and seem visibly delighted by this. “It’s sexy by design,” laughs Cattet.) Rather, they consider discord to be the most precious dimension of their union. “What has an impact is that we are two,” Cattet says. “He has his point of view, I have mine. Each can put their vision on the screen… He is my first audience, and I am his first audience.” Though they share credit, they’re clearly of independent minds, often responding to questions in perfect tandem with completely opposite answers. In the production process, their disagreements act as a vulcanizing agent, toughening and refining each idea. “During the preparation, we are fighting a-lot-a-lot-a-lot,” she says. “But after the fight, we’re on the same wavelength, and we can shoot with no problem. Then, in editing, a lot of fighting again.”

“On [The Strange Color of Your Body’s Tears], we had more disagreement,” Forzani adds. “It was nearly chaos at the end, at the breaking point. We wanted to do Let the Corpses Tan because it was not such an intimate story; it’s based on a book, so it’s neutral for us. It was easier for us to communicate again.”

If Let the Corpses Tan was supposed to be a back-to-basics move for the Cattet-Forzani brain trust, it sure doesn’t feel that way. The hyper-tense action film works on a seemingly smaller and more grounded scale, playing out over the course of one long day in the ruins of a Mediterranean villa (captured via a set in the Corsican mountains, two days shooting in Italy, and a Belgian studio) and following the most lucid plot the masters of abstraction have ever allowed. “I was very afraid of this,” Forzani confesses. “For Amer and Strange Color, we built our own way to tell a story, a labyrinth through association of image and ideas. To be confronted with something more linear, I was a bit nervous, because I thought, I’m not used to this. Maybe it can open some doors, but it’ll be a challenge.”

“I was confident,” Cattet casually adds.

But the story of a gang of robbers absconding with 250 kilograms in gold bricks and the grueling shoot-out that ensues when a pair of cops track them down to their stronghold was far from easy on its directors. This film features some of their most technically elaborate spectacles yet. In one astonishing set piece, an unseen gunman shoots a woman’s dress off of her body while leaving her unharmed in a series of stroboscopic cuts. Many of the oneiric images around which the hazy film is built demanded more involved tech work than one might assume; a recurring visualization of death as a silhouetted nude woman who urinates liquid gold onto the face of the departed posed curious challenges. “To shoot with the sun between her legs and get it perfect, it was not easy,” Forzani remembers. “In that moment, for the upward shots, I’m lying beneath her with the camera. We had to get very close. I laughed, ‘It’s like a Jess Franco movie!’”

“The gold liquid was apple juice, iced tea, and yellow coloring,” Cattet notes. “We brewed it ourselves.”

Let the Corpses Tan is the pair’s greatest achievement to date, a taut all-killer-no-filler thriller laced with interludes of ravishing high-art insanity. Attaining a hallucinatory fever pitch and then miraculously keeping it up for 90 sensory-overloading minutes, they’ve advanced the ambitions of their forebears while contriving something wholly their own. It’s not hard to imagine a new generation of film students holding the works of Cattet and Forzani in the same esteem they reserved for Deep Red. The directors have gone from admiring the great underground auteurs to joining their ranks—they’re now creating the memories, false or otherwise, that first ignited their artistic spirit.