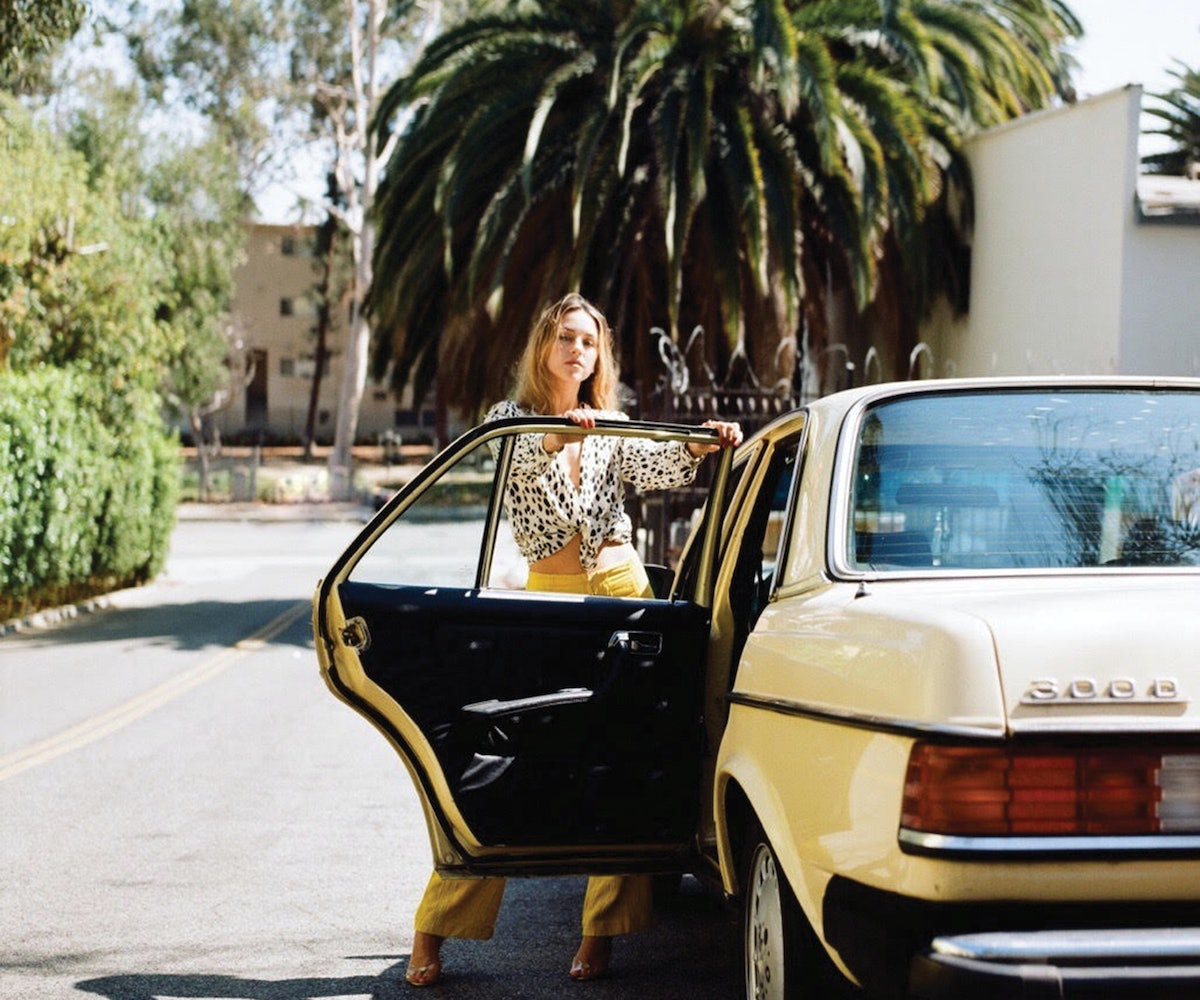 The following story appears in the October 2016 issue of NYLON.

“I don’t use GPS,” says Lexi Stellwood, as we come upon a roadblock on a winding street in the Hollywood Hills. “I can look at a map and be like, ‘That’s where I’m going.’ But sometimes we take little detours.” When you’re driving a car as quirky and comfy as Honey Ryder, her light-yellow 1982 Mercedes-Benz 300D Turbo Diesel, small diversions are more of an enjoyment than an inconvenience.

The model and singer (her new all-girl band is called Barcelona) paid $3,500 for the car nearly six years ago when she moved from New York to Los Angeles. Since then, Stellwood’s made it distinctly hers: A Big Sur bumper sticker adorns the back, floral fabric is affixed to the ceiling to cover ripped leather from a backseat bike storage mishap, and a jumble of necklaces and crystals (including a “good luck gem” for driving and one that looks like “a unicorn horn”) hang from the rearview mirror.

Like any vintage car, it has its imperfections—right now, one of the headlights is out, an automatic transmission fluid leak needs fixing, and the A/C is on the fritz—but they don’t matter. Turning the ignition, her silver bangles glinting in the sunlight, Stellwood smiles and declares, “This car is magic.”

What’s the story behind the nickname?I always loved James Bond when I was little, and my favorite Bond girl was Honey Ryder, [played by] Ursula Andress. She’s the blonde who comes out of the water wearing the white bikini!

Why did you buy this car? I had a Saab that was a lemon, and I hated having a car payment. So when I got out here I was like, I want to find a car that’s gonna run forever, that’s also classic and cute. My mom had a convertible Mercedes 450SL that was our family car—me and my brother would be squished in the backseat, but it was amazing. So I was really obsessed with Mercedes. Plus, Honey Ryder’s diesel so the gas mileage is better than a Prius.

We speed past the greenery of Griffith Park before making a right on Los Feliz Boulevard.

Do you drive it every day?Yes, it’s my daily driver. And I take it on road trips all the time, to Big Sur and Joshua Tree. It’s super comfortable, I can pack my friends in.

What’s the most memorable drive you’ve taken in this car?I was once on the 101 Freeway with my boyfriend coming back into Hollywood from Malibu when the hood flew up and smashed the windshield. I had gotten an oil change, and the hood didn’t properly latch because it was a little bit broken and I didn’t know that. I started honking my horn and slowing down and my boyfriend put his head out the window telling people we were pulling over. I don’t know how we managed it. It was crazy.

From Franklin Avenue we head up Beachwood Drive and hang a left on Ledgewood, taking tight curves on skinny streets as we climb higher into the hills. The Hollywood sign looms above us.

Do you do any of the maintenance yourself?I can change the oil, I can change the fluids, and I know how to check it out—it’s very simple inside. I also learned how to change a tire, ’cause I’ve gotten a couple of flats.

Why are you an old-car enthusiast?Older cars have such character and beautiful design—they feel good to be in. If I ever hit the jackpot I’ll totally be that lady that just has a bunch of vintage cars. And I’ll name them all after Bond girls.

Back down on Franklin, Stellwood honks at a driver who’s sleeping through the green light before turning left on Western Avenue, taking us back to Griffith Park.

What’s Honey Ryder’s most distinct quirk?This car sounds like a truck because of its engine. People hear me coming, and they’re like, “Oh, I know that Lexi’s here ’cause I can hear her car.” Even my cats notice when I get home.