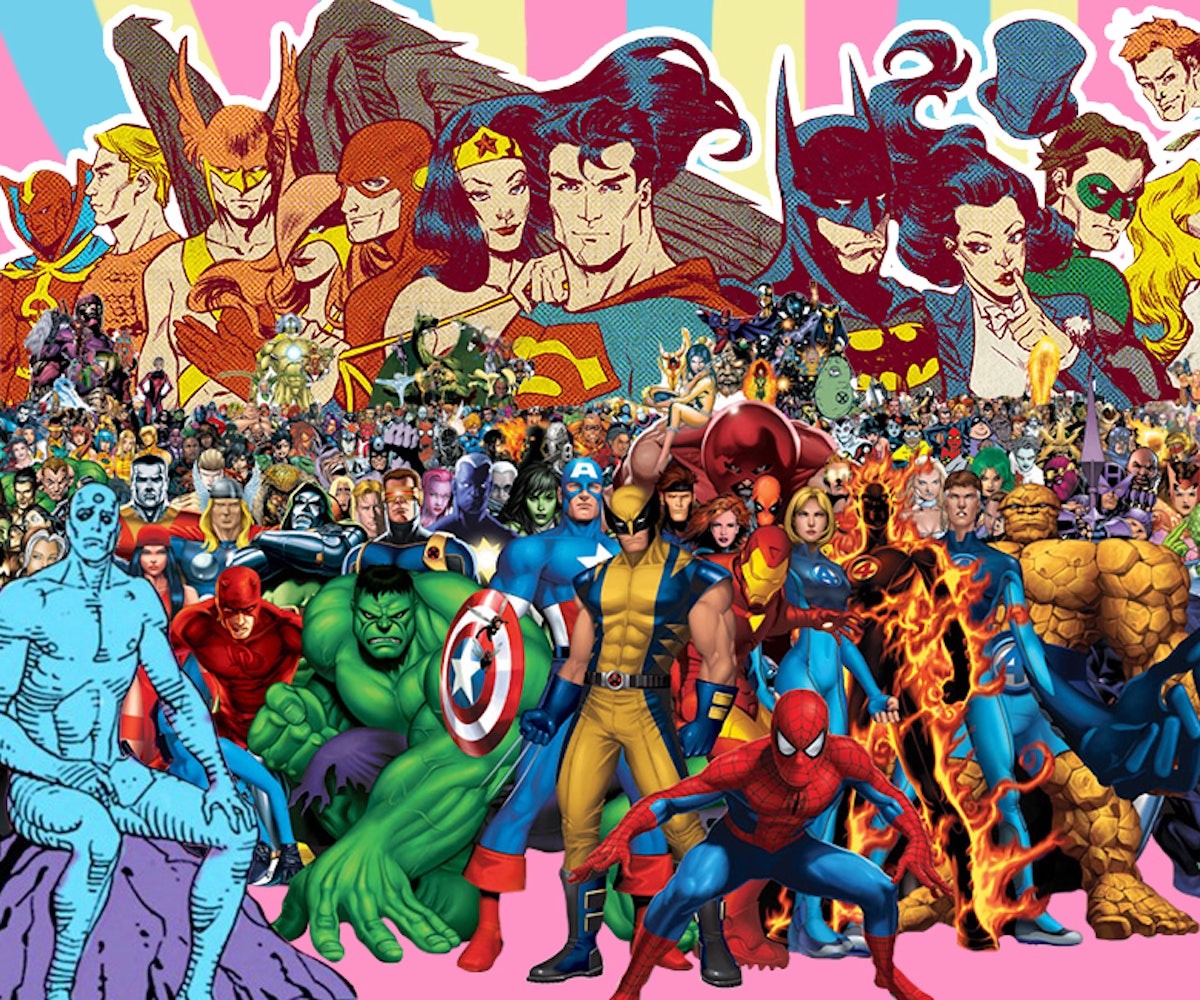 The superhero is having a moment. Well, no. Superheroes are always having a moment, but this moment in particular, with Marvel's Cinematic Universe being the only way Hollywood can score a blockbuster—DC's Wonder Woman, too!—is special. Adults who grew up reading the comics, playing the video games, role-playing with the toys, and watching the television shows now have the opportunity to experience their childhoods in new, full-sensory ways. It's nostalgia in IMAX form.

It's fascinating to watch as a relative outsider—especially a queer outsider who spent his adolescence looking at pop stars the way many do at Spider-Man, The X-Men, Batman, and Thor. How do these narratives, which on the surface feel heteronormative and marketed as such, align themselves with the queer narrative? The answer is, of course, relative to the individual and not mutually exclusive to any identity. As Steve Foxe, a New York-based editor and writer, tells me, it "can be a simple power fantasy just as it often is for straight cis men." But as it is with anything, there are levels to these fantasies, and for queer-identifying people, the dual lives many superheroes live hit a deep existential nerve.

Almost all of the major superheroes today—Batman, Spider-Man, the Power Rangers, Daredevil—have two identities: their public identity and their superhero identity. Spider-Man's Peter Parker struggles constantly between repressing his superhero identity and living it out fully and truthfully. "Especially for younger gay men, the concept of striving to be the best but being undermined by having a 'secret identity' is deeply relatable," Foxe says. "You pour so much into maintaining that charade that it has to take a toll somewhere." These superheroes live in a closet of sorts, one that's haunted by a fear of coming out due to a variety of societal norms and status quos. They're different. They may not be queer, but they're not like everyone else. That's something queer people identify with.

Some superheroes, though, don't lead two lives—their superhero identity is their only identity. "The X-Men are the most obvious superhero group for a young [queer] kid to relate to," Geeks OUT's Ian Carlos Crawford says. "Their whole thing is an analogy for being a minority and othered." Stan Lee's X-Men are mutants, born different and into a world that does not understand them and ostracizes them. (Ironically, it's the X-Men who save the world.) They're a diverse group of extraordinary individuals who create a community of their own that is both strong and proud. For David Vázquez, the mutant's marginalization resonated with him, "a fey Latino boy," whose kick-ass abilities were also entertaining. Plus, the X-Men's Legacy Virus was essentially a metaphor for the AIDS crisis.

All socio-political commentary aside, superhero narratives are filled with strong female characters, which we know makes up a huge percentage of queer icons. Characters like Wonder Woman, Storm, Dazzler, Captain Marvel, and Buffy the Vampire Slayer are fierce and independent, capable of kicking just as much (if not more!) ass as their male counterparts. Crawford applauds X-Men's Rogue for her strength and how she "didn't need her sometimes-love interest, Gambit, to save her." Buffy, too, navigated the trials and tribulations of being a teenager while also slaying literal vampires.

"The stories I gravitated toward were almost exclusively about women," NYLON's senior video editor Tina Vaden says, "who weren’t always outwardly queer, but were always feminists and always strong." For Vaden, Jaime Hernandez’ Locas series was pivotal to informing her queer identity. Maggie Chascarrillo, Locas' protagonist, was "a punk, an activist, into sci-fi, a Mexican-American, bi, and she grew up in L.A." Vaden says Chascarrillo was also "fully fleshed-out and nuanced," adding that "reading her story gave me something more than the triumphs of white characters could, showed me what a queer POC life and community could look like, what I wanted my own to look like, and offered me solace when my own world felt like it was crumbling." That sort of representation is vital to the queer experience; it helps normalize what the world often sees as abnormal. Their superpowers only add another element of fearlessness to the community, because to be queer is to have superpowers.

When the going gets tough, ask yourself, What would [insert superhero name here] do? "The answer is almost always," Crawford tells me, "they wouldn't give up, even if the world around them is burning down." That's something to idolize and take pride in.