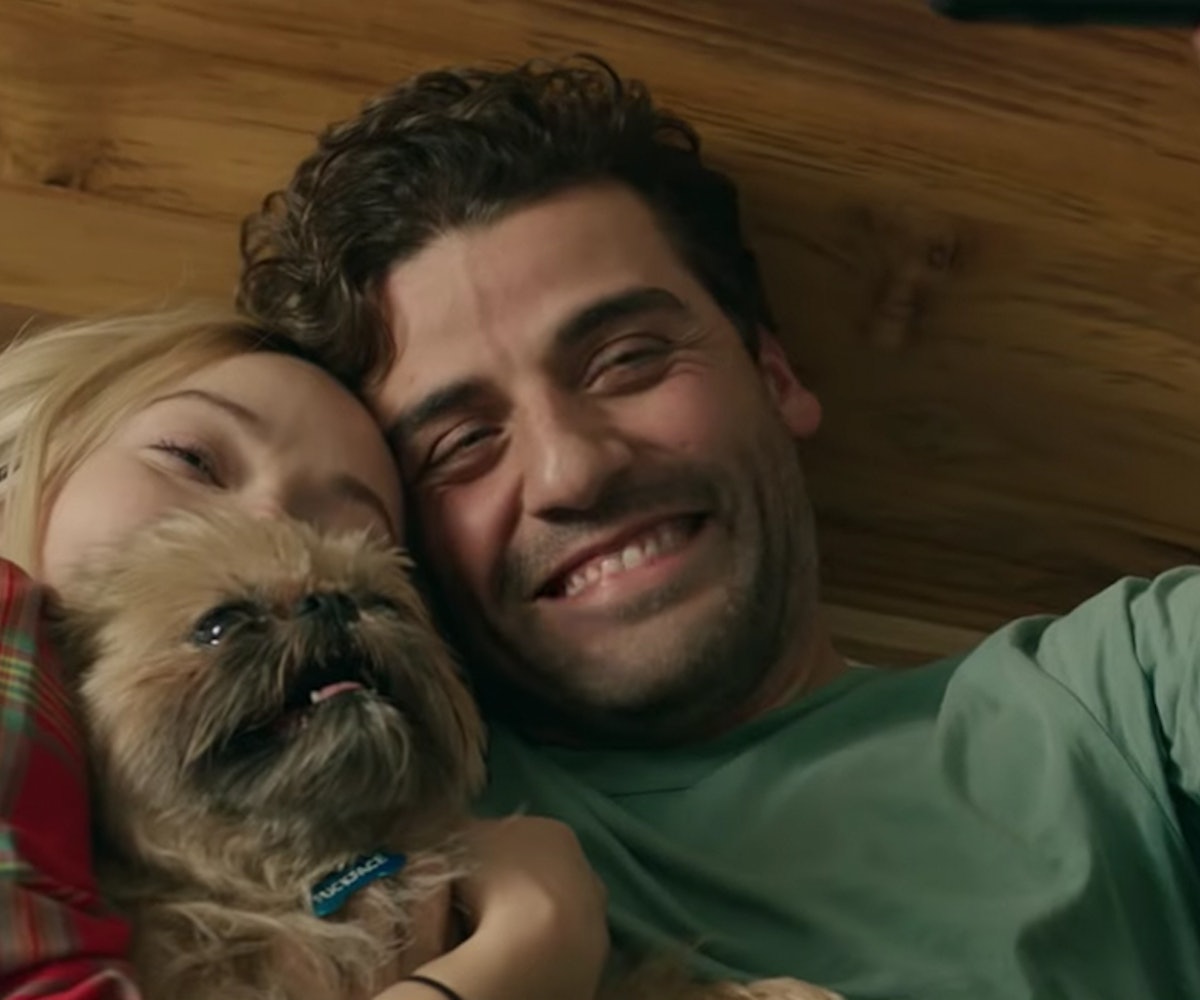 Screenshot via "Life Itself" Trailer

It would not be 100 percent accurate to say that Life Itself, the new movie from This Is Us impresario and frequent Disney screenwriter Dan Fogelman, is the first drama film to see a wide release in 2018. Out of the approximately 100 other movies from this year that have played on over 1,000 screens, about 20 percent could be categorized in the “drama” section at the video store that no longer exists. But breaking these down further, like in those specialized sections at the really clever video store that no longer exists, it’s hard to find a movie that couldn’t be shunted off into another genre. Eight of those 20 dramas could also be classified as thrillers—from real-life incidents (The 15:17 to Paris) to crazy pulp (Red Sparrow) to survival stories (Adrift and Alpha). Another four are really romantic dramas, from tame (Forever My Girl) to tawdry (Fifty Shades Freed), and are kind of their own, often dramatically inert thing. And all of the rest are churchy—some mildly (The Miracle Season), some explicitly (Paul, Apostle of Christ).

Life Itself is not churchy—at least not in the traditional, Jesus-loving sense. It worships a different power, as Fogelman prostrates himself at the altar of screenwriting. You may have heard, from everyone to filmmakers to film critics to fans, that all the big stars, fancy special effects, and ostentatious direction in the world can’t match the power of a "good story," or a "strong screenplay." Life Itself puts full faith in this notion. It is a movie that purports to be about the very act of storytelling, and how it informs our lives, before and after we’re here on this Earth. This is a potentially powerful idea—so powerful, apparently, that it demands its characters be subsumed into nonstop melodrama. Many of them do not have discernible jobs, or any sense of lives outside the frame, which should undermine the movie’s point that we are all main characters in our own stories and supporting figures or cameos in countless others. But by the movie’s tortured logic, this makes a kind of sense. If a person isn’t living through some kind of insane melodramatic contrivance, are they really living at all?

This is maybe not a bad idea for a movie (not least because it has been used by plenty of other movies). It is definitely a good idea for a bad movie, which is what Life Itself is, aware only of the “movie” part. It begins with Samuel L. Jackson reading the stage directions of a screenplay, and also identifying himself as Samuel L. Jackson, because despite the fact that his voice is immediately recognizable and despite the fact that he briefly appears on screen just moments later, this a movie that needs you, the idiot watching it, to understand immediately that Sam Jackson is narrating it.

Initially, Jackson narrates a quickly scrapped screenplay by Will (Oscar Isaac), who is attempting to work through the tragedy that his wife Abby (Olivia Wilde) has left him, alternately stonewalling and spilling to his therapist (Annette Bening). If this sounds like more of a bummer than a tragedy, and if Will’s day-drinking, faux-unkempt beard, and DGAF public despondence all seems like a reaction to something worse than a divorce, and if “left” sounds suspiciously vague, then you may be on to something (don’t worry, though; the movie has no idea that you already know). Will recounts the details of how he met Abby in college, where she has a major breakthrough when she realized she will write her senior thesis on the unreliable narrator! And how—get this—aren’t all narrators unreliable? And isn’t, like, life itself the ultimate unreliable narrator? This is a breakthrough from someone the movie insists is the smartest person in school. Later, it is implied that her thesis was not well-received because it strayed from stuffy literary criticism into something more lyrical and philosophical (qualities we all know are disdained by English departments the world over). My own suspicion is that Abby’s thesis was no more than six pages long, nine at best.

This is just one chapter of Life Itself (the movie, not the unreliable narrator that surrounds and unites us all). Further chapters focus on Dylan (Olivia Cooke), the twenty-something daughter of Will and Abby; Javier (Sergio Peris-Mencheta), who works for a wealthy olive oil baron (Antonio Banderas) with a traumatic past; and Rodrigo (Àlex Monner), Javier’s son with Isabel (Laia Costa). This is a multigenerational family saga that treats the fact that it is a multigenerational family saga as both a mind-blowing twist and a profound observation. It is the Abby’s Stupid Thesis of movies.

Maybe on TV, with scenes and characters given time to breathe, This Is Us does this kind of ambitiously structured melodrama better. Fogelman occasionally shows some visual ambition, like a flashback scene that shows multiple Olivia Wildes cavorting on a college campus, all sharing the frame at once. It’s a neat little Michel Gondry flourish in a movie that usually can’t resist explaining its structural playfulness or underlining its quirkiness, like having characters name their dog Fuckface, something you know because they go out of their way to say “Fuckface” over and over. Fogelman is besotted by the awesome power of writing, of storytelling, of the movie Pulp Fiction, and the motherfucker can’t even learn how to swear right.

Compressed into a two-hour film, Fogelman’s vision of endless interlocking tragedies that may give way to moments of sublime happiness feels both relentless and antsy, as if he isn’t sure what boring stuff characters might be doing when they’re not grieving (Rodrigo’s brief moments of downtime feature him dating a ditzy NYU coed conceived with enough pure contempt to put the movie’s sense of humanity into question). The movie’s idea of writing in any medium is shockingly sophomoric, to the point where it can’t help but drag poor Bob Dylan into this mess; his 1997 record Time Out of Mind is a major reference point in a way that ultimately manages to feel dismissive of Dylan’s entire body of work. One of his greatest moments of genius, the movie implies, was placing the wedding reception-ready ballad “To Make You Feel My Love” in the middle of an album otherwise preoccupied with death and despair. And with that, Fogelman projects his own needy insistence on telling the audience things are going to be okay following a manufactured gauntlet of misery porn onto a vastly more complicated, inscrutable artist. (He also appears at times to, whether consciously or not, attempt a rebuttal of Kenneth Lonergan; in the early going, the plot of Life Itself reads like a tone-deaf mash-up of Lonergan’s Margaret and Manchester by the Sea, an imitation made of straw for Fogelman to bash at in the name of redemption.)

As alluded to earlier, Life Itself is a rare thing, especially outside of the last-minute November-December pile-up of Oscar hopefuls. It is a mainstream, contemporary-set, wide-release drama intended for adults. This is no small thing. It is part of a disappearing middle class of studio filmmaking. There is something admirable, however obtusely, about the way Life Itself does not go gently into that good night. Indeed, it goes the way of Collateral Beauty, another recent case of screenwriting hubris that seems to imagine itself as an alternative to nonstop spectacle. Is this what happens when Hollywood makes so many sequels and shared universes? Do its writers try to go mad with the power that’s already been wrested from them, reducing life to overwritten balderdash? Is this someone’s idea of old-fashioned moviemaking with a modern sensibility? From its earliest moments, Life Itself presents as self-aware. But if all you’re ever thinking about is the holiness of storytelling, your vainglorious self may be the only thing you’re actually aware of.

Life Itself is out in theaters now.