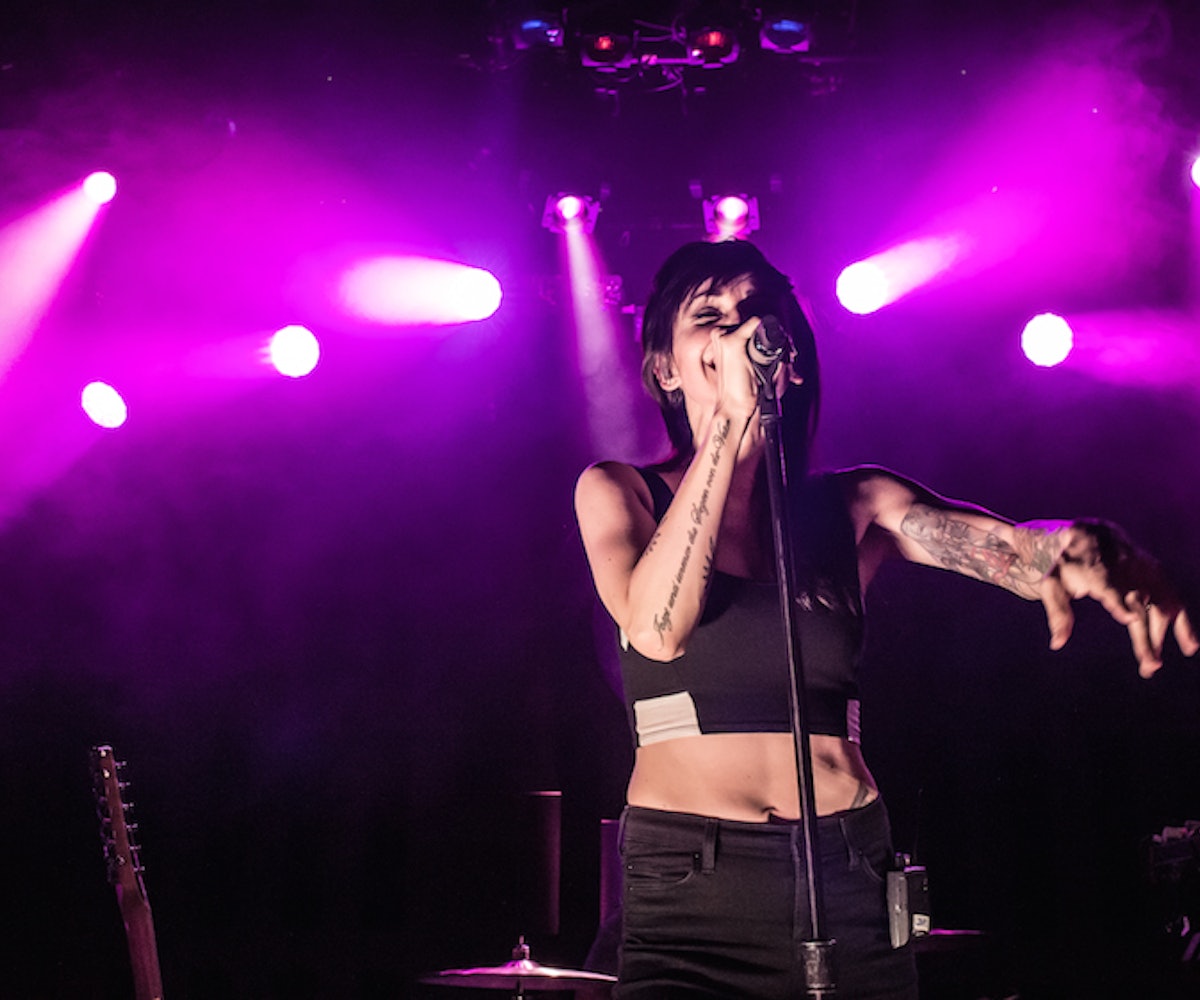 We sat down pre-show with rising Canadian electropop star Lights to talk songwriting, black pants, social consciousness and her baby girl, Rocket Wild, who was in the green room sleeping through the opening band’s soundcheck with the aid of some painfully adorable noise-canceling headphones.

Lights is currently touring to support her new record Little Machines, released last month, a seriously rocking departure from her previous work. In a faux-fur-trimmed parka and brown leather lace-up winter boots, Lights gleefully shared the details of all the newness in her life.

Read on to hear more about Lights, motherhood, and being a comic book character...

All photos by Isaac Pritzker.

It’s awesome. She makes everybody really happy. And I think the hardest thing about being on tour is missing home and missing family. Having them around takes that element out so I enjoy tour a lot more. It keeps me sane.

How do you reconcile the different lifestyles that come with rock n’ roll and a “traditional" family life?

I've just been taking everything a day at a time. You kind of just plan around the things you know need to get done and ultimately it cuts the fat. You’re not worried about the same stupid things you used to be. I’m probably less stressed out—ironically—even though it’s a whole other layer of work. I was worried about it going into motherhood—do you have to settle down suddenly and not tour anymore? Become the cliché mom picking food up off the floor? You just don’t know going into it but she’s part of my life and I’m a touring musician. She doesn’t care where she is as long as she’s taken care of. She can crawl around and she loves music.

I can just picture her with those baby headphones on having a great time.

Where did you get her name, Rocket Wild?

Our first name was Cloud, from Final Fantasy VII, who is a great warrior. But she just was not a Cloud. The night I told my band I was having a baby we had a show in Vancouver at the fair grounds. I was on the cusp of rediscovering my passion for music, which was part of the discovery process for this album. I got up on stage and there were 7,000 people there and it just felt awesome. It really reminded me—this is what you need to be doing. This is the best. So I looked out and saw behind the crowd this giant neon rocket. I was talking on stage about how it was awesome everyone was there and about this rocket. Halfway through the night I realized it was just a sideways ferris wheel. I was so embarrassed! But that became the running joke of the night. Later my sister said that would be a really cool name, and that was that.

You guys were pregnant at the same time, right?

She had her baby five days before me. It was awesome.

Sounds adorable. But I guess we should talk about your music, too.

(Laughs) I could talk about her all day.

Nostalgia is such a theme in your music. Is there a particular time in your life you are nostalgic for?

There are specific memories and eras that were awesome. I think there are eras of now that ill be nostalgic for in the future, and I’m trying to recognize those moments as they happen now that I’m looking back to the old ones. One of them is following the period I first got my 8 track. It was awesome producing music for the first time. I would spend countless hours in my little studio—it was called Starry Night Studios based on the Van Gogh painting. It was the ultimate experience for me at the time. I think about that a lot because that’s how it should be. You should always feel like your discovering and you should always feel excited about your craft. This past couple years was a rediscovery of that passion for me.

Another one is from my youth, talked about in “Running With the Boys.” We used to go to this summer camp and had this little village called Scrawnytown in the forest. I was the vice president and we had a national anthem and everything. It was awesome! I have so many memories of playing there but I know if you went back now it would just be a forest. I'm reminded constantly of how knowing too much can be the arch nemesis of creativity. So it’s getting back to that youthful naivety that is so vital for creation.

It seems like there are so many possibilities when you’re a kid, so you can just run wild with those sort of things.

There are no rules. And there are no boundaries in terms of where your imagination can take you. That is so necessary for music. You can get a rut where you think you need to create something that sounds like a certain thing—especially with pop music. Pop music is actually a challenging genre. Not only do you have to be artistically expressive, but you also have to do that in a very strict format. I’ve always liked that challenge, but it’s very easy to slip into something non-creative. You just have to stay inspired all the time.

Does being onstage inspire you?

Yah. Sonically and energy-wise. Having toured a lot really influences some of the decisions you make in the studio - is this part anthemic enough for people to want to sing to it at a show? is this part dynamic enough? Is this drum beat “arena” enough? You think about it a lot when you are creating, for sure.

So are you writing now while on tour?

Definitely. Even though the album just came out a month ago, one of the things I learned having experience writers block is that you can’t take a break from writing. It’s a muscle and it has to be exercised. I toured a lot after Siberia and didn’t write. I think it froze over a lot of those muscles, so I had to go in and chip away for a little awhile and get some of those stagnant chucks out of the way before I got to the good stuff. I don’t want to let that happen again so I’m always coming up with ideas now.

Me and the guys from the band always bang through a couple of acoustic songs. One of which is this growing repertoire of country songs that they’re writing. They’re these amazing country songs that we all know and sing backstage that nobody knows! And I’m like—send it to Nashville. We need to get these out. But we just sit around, sing country songs and take a shot.

Are you reading anything?

I’m reading this new graphic novel—Locke & Key by Stephen King’s son. Its this haunting tale - very nostalgic. Kind of befitting of the things that are inspiring me these days.

Any plans for your comic book character, Captain LIGHTS?

I want there to be! But who knows. Someday for sure.

For sure. I always have to wear black pants. Then I can alternate the shirt and wear the same pants and it’s a new outfit. On this tour it’s been all high-waisted pants and huge boots. I always need a back pocket to put my picks in. And I can’t wear something without a waist because I need to put my monitor pack on it. So I express fashion differently every night through the shirts that I wear. I have an unending collection of little shirts and that’s my stage uniform.

When you had writers block, was there anything in particular that helped you break through that?

There were a few things I did. It was fun because I felt like Dr. Phil in my own life. I had to ask myself what kind of therapeutic exercise can I do to get through this. Because music wasn’t exciting. I didn’t like what I heard on the radio, I didn’t like anything I was listening to. I just knew too much about how it was made. It didn’t seem fun anymore. So i turned away from music for a little bit and I focused on poetry. I started diving into poets like Patti Smith. I started to look into her life and her body of work. I tried to understand where she was coming from with her art form and the way she would express herself when she would do readings at coffee shops and throw chairs. I discovered that passion for lyric, and only lyric. So I wrote a poem every night to free myself up lyrically.

I also did a lot of painting and forced myself to listen to entire records that I wouldn’t normally listen to. And I took some really cool trips. I went to New Mexico and visited this community that is completely off the grid. It’s really just hippies and alcoholics that were there and had quite the experience writing. In that week I wrote six songs and three of them went on the record. So it’s those kind of things that you do to change your surroundings when you’re really searching that really make the difference.

Can you tell us a little about your project with World Vision Canada sponsoring children from the Philippines?

I’ve been working with World Vision Canada for a long time. They’re amazing. I grew up as a missionary kid in the Philippines so I experienced first hand the poverty that exist there. I use being able to go on stage and talk to people every night as a platform to try to show that a little bit and its really cool doing that on this tour. We don’t have it for the American dates - only the Canadian dates - but you can sponsor kids at the show. We picked a village in the Philippines that was pretty ransacked by ___ typhoon. It’s a small village of 800 people and we’re going to see how many people from that village can be sponsored over the course of the tour. We’ve already sponsored almost 60 and I think there is only 15 more kids who need sponsorship.

It’s really great to see you using your influence in such a positive way.

You’ve got to use your powers for good, man.