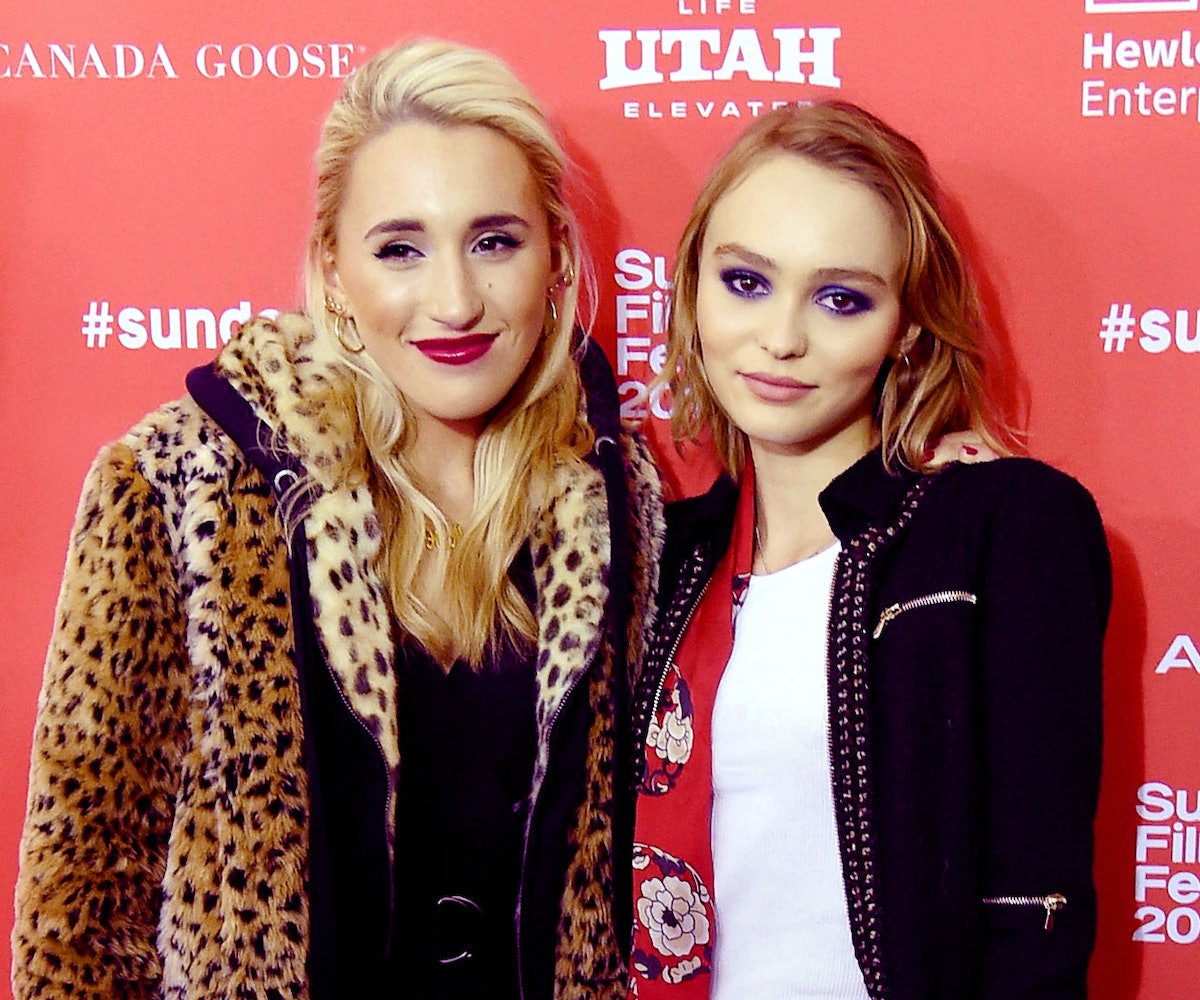 Imagine, if you will, that the exploits of you and your BFF were just so adorable that both of your fathers couldn't get enough of watching you be your normal sassy, teenage-d selves. Imagine, furthermore, if your father decided that you and your pal's interactions were just so great that he wanted to capture it on camera and show it to everyone, invite your bestie's dad along for the ride, and dream up a scenario in which you and your homegirl could save the world

by being yourselves. Basically, this scenario is the start of many a YouTube vlog, and very rarely does such a story capture the hearts and eyes of the largest film festival in America. Then again, imagination aside, very few of us can call director Kevin Smith our father, and Lily-Rose Depp, she of Johnny Depp fame, our closest friend.

But, when one sits down with Lily-Rose Depp and Harley Quinn Smith, its clear what father Kevin sees: Harley Quinn is self-assured and hilarious, with a throaty voice of someone twice her age and an easygoing nature that is a rarity in Hollywood—especially young Hollywood. She teases quieter, slightly more posed Lily-Rose out of her thoughtful shell, pushing her to laugh and answering her questions with the knowledge of the daughter of a film buff. Depp is, of course, strikingly beautiful—her genetics are comprised of perhaps the greatest heartthrob in Hollywood and a supermodel—but she is just as goofy and animated as Harley Quinn, and the two speak a language all for themselves. No doubt Kevin Smith noticed that this was perfect fodder for his new film

, which premiered at Sundance last week.

Are you guys really BFFs? You’ve been friends for years and years?

It’s been a while…

What was your first memory of each other?

We were just trying to figure that out!

: Yeah, we were just talking about this, 'cause Harley had just been at the school for a year or so before I came, and so I remember visiting the classroom and just being the shyest little girl, hiding behind my mom’s legs and stuff. But Harley was one of the first people I actually talked to and opened up to, and she was one of my first friends ever.

Wow. And now look at you guys!

Obviously, the writer of the film knows both of you guys very, very well. How much of your personality has made it into your characters?

I think our humor carried on. A lot of the humor I use day-to-day is shown. My character is more on the follower, on the not-always-aware-of-what’s-happening side.

: She’s more of the bubbly one and I would say I’m more closed off, a little more…

. I feel like I’d be Bubbles and you’d be Buttercup.

: No, you’d be Blossom, actually. The one that knows what she’s doing.

: I feel like when Colleen M. (Harley's character) gets lost in her world, Colleen C. (Lily-Rose's character) can bring her back down. They balance each other out really well. What I think is really interesting is, it really

: Definitely not a rare species for us to come across—15-year-old girls.

Well, especially in your life. For some, probably less.

That’s awesome. And you guys are talking about it with such a good grasp on the characters, too. How weird is it to take direction from your dad—to have a dad and a boss?

You would think it’s weird—everyone’s like, 'That was probably so weird!'—but it wasn’t that much different, because he gives me direction in life, too. I come to him when I need advice, and he’s such a smart and wise person. He’s the wisest person I know by far and I go to him for life advice all the time when I don’t know what to do, so this was not much different because he doesn’t change at all from a director to just a regular, day-to-day Kevin. It was the same. It really wasn’t much different.

Was it weird to be taking direction from your friend’s dad?

No! It’s funny, I grew up seeing Kevin as just my friend’s dad, but I always knew he was a director; I just obviously had never been in one of his movies. It wasn’t really shocking to take direction from him when we started this movie because we had already shot that scene in

, and so we already had the experience of being directed by him. But it’s not even really like directing, in that he’s like 'Do this, this, and this in this way, and don’t stray from that.' He lets us pretty much just do whatever we want and improv because, at the end of the day, he’s the editor, so he knows what he wants. He just let us improv and add things and if it works, it works; and if it doesn’t work, it doesn’t work. It was awesome. Kevin’s such a great person to work with and he really lets you find your character in your own way and he treats everybody with so much respect...and he's so much fun! When you get there on set he’s so excited to be there and so excited to start the day. There were a lot of positive vibes.

What is your favorite View Askew universe movie?

Growing up, I was told never to watch them because of the adult level they were at…so the only one I’ve seen is

maybe this year. I mean, I’ve seen little bits of

but my parents were like, "Don’t watch it, you’ll be scarred. You don’t want to know what your dad thinks of." We go to the San Diego Comic Con every year, and I never go to his panels for the very same reason. But in the past two years I went once, and he was talking about my parents having sex. So I was like…"Yeah, I’m gonna pass." But

Yeah. I mean, I grew up on that movie. Many people in this room could probably quote it.

is on my list, I really need to see

. But I actually loved

. I know Kevin was saying a lot of people didn’t like it, but I loved it. I thought it was hilarious—I thought it was so funny. But you have to have that dark humor. I like that, so I think it’s funny, and I think Justin and Genesis and Haley…everyone who was in that movie was incredible. So I really liked it.

I have a hard question. What is the worst advice that your dads have given you? Like the silliest, most ‘dad’ advice?

: I don’t think this is worst, but this is by far the silliest: Every day, before I leave my house, he tells me to 'bring something stabby' with me—like a knife, honestly anything pointy, just in case. When I’m going anywhere, even to my friend’s house, just in case there’s a burglar. All times. So, I think that’s good advice, it’s just a little weird. My dad’s weird.

: I don’t think he wants to impose and tell me a bunch of stuff… He lets me be. I’m a really independent person, so he lets me be independent. But obviously I know if I need advice I can go to him. I guess the silliest piece of advice he’s ever given me is "Don’t talk to boys" because it’s unrealistic, I guess. But that’s it.

I know that you "came out" on Instagram as queer…

That was really misconstrued, that whole thing. A lot of people took it as me coming out, but that’s not what I was trying to do. I was literally doing it just to say that you don’t have to label your sexuality; so many kids these days are not labeling their sexuality and I think that’s so cool. Just like food, you could think peanut butter is your favorite food for, 5,000 years and then be like, "I actually like burgers better," you know? I was just trying to say that kids and people in general don’t have to label themselves and say, "I’m straight" or "I’m gay" or "I’m whatever." If you like something one day then you do, and if you like something else the other day, it’s whatever. You don’t have to label yourself, because it’s not set in stone. It’s so fluid and there’s so much pressure on kids to label themselves and say, "This is what I am, this is what I like." I was just trying to say that it’s unnecessary; you don’t need to label yourself. I guess it came off the wrong way, because then everyone labeled me as gay. That’s not what I was trying to say. Not that there’s anything wrong with that, of course! But I did that literally just to say you don’t have to label yourself, and then everyone was like, "Lily Rose Depp comes out as gay!"

The response just reaffirms that everyone’s like, "You have to stick to something," which is so stupid.

You’re saying the opposite. You don’t have to…

No, I’m saying it doesn’t matter! It’s not anybody’s business, because I am going to date whoever I’m going to date. I was just saying, kids don’t need to label their sexualities. It’s not that big of a deal.

Why do you think this is happening now? You brought it up that kids these days—and for some reason I keep talking about how old I am—but that was just not something that happened when I was in high school…

It’s definitely time. Not only referring to sexuality, but in gender, in everything. It’s time to make some progress. There don’t need to be defined lines between what certain genders need to be and what sexuality is. Everything is changing now, which is great, and everybody is slowly becoming more open to more things. I feel so lucky to be a part of the time that’s the most accepting it’s ever been. I can’t imagine living in a time when there was division between black and white, or that gay, bi, transgender, or lesbian wasn’t allowed. I’m very thankful to be a part of the time that’s the most progressive it’s ever been, but at the same time I do realize there needs to be more progress.

Fathers and daughters…there’s always one thing that a dad just doesn’t get about his little girl. What would you think that yours are?

My dad doesn’t really understand Instagram, but it’s not really his time. Then again, a lot of people who didn’t grow up with it are into it now, but it’s just not really in his personality. He’s not really into it. I mean, he’s supportive, but it’s something that I do that he wouldn’t be interested in doing.

I love to go to different places, and do different things—like adventurous stuff. And my dad does not understand the want nor the need to try these new things ‘cause he’s so scared that I’ll get hurt. Even if it’s ice skating, he’s like, ‘Are you serious? What if you get hurt? What if someone slices you in the neck with their ice skate?’ And I’m like, 'Dude, please, just let me do my thing.' He doesn’t really get the need to do that type of stuff.

NEXT UP
Culture
Kaia Gerber Won’t Stop Until She’s Cast As Patti Smith In A Biopic
Culture
The Madonna Biopic Is Being Scrapped
Culture
The 2023 Oscar Nominations Full List Is Here
Culture
Scream 6 Trailer Brings The Nightmare To New York
Style + Culture, delivered straight to your inbox.