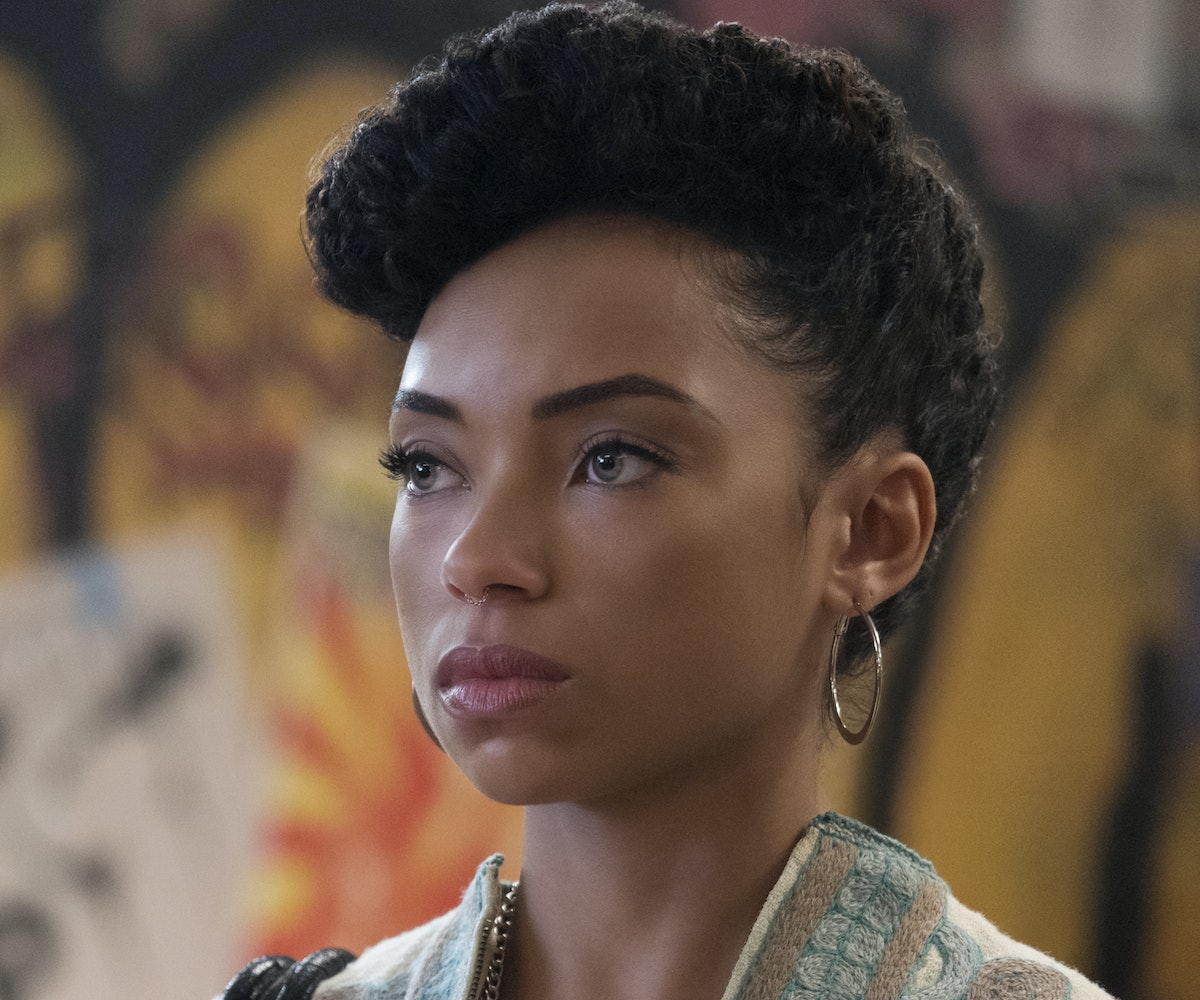 Ever since it first premiered on Netflix last April, Dear White People—Justin Simien’s series adaptation of his 2014 film—has been the subject of much discussion. Starring Logan Browning as Sam White, the outspoken host of Winchester University’s "Dear White People" radio show, the series—now back for a second season—struck a chord with its timely take on contemporary racial politics, as well as how they play out within predominantly white spaces. But what exactly was it like preparing for the return of a role that has been the source of both productive discourse and bullshit hate? It was hard, says Browning, but at the same time, the opportunity to educate and activate, while also entertaining, made it all incredibly worthwhile.

“I listen to people who actually have debates,” she tells us. “If you have a different opinion from mine and you want to debate a topic in an intelligent and intellectual way, I'm here for it.” With that in mind, we wanted to speak with Browning about what it was like bringing back Sam amidst a world that continues to prove day in and day out that Dear White People is still as relevant and pertinent as it was the first day it premiered. Read our Q&A below, in which we talk about everything from Sam's character evolution to the unfortunate, real-world inspiration for the show's new, alt-right troll story line.

How did your experience change between filming Season 1 and 2?

Season 1 was nerve-racking for me because I was taking on a role that was played by the amazing Tessa Thompson. It was kind of like theater where you play a role that was already done by another person, but I was nervous because I knew my Sam was not going to be like Tessa's Sam. But for Season 2, I was able to have feedback from people from Season 1 and apply that to what I did in Season 2.

Also, [executive producer] Yvette Lee Bowser and Justin Simien called all of us. Specifically for me, they gave me a heads up on my arc for the season. So it was completely different to know where exactly Sam was going, what she was doing, and that I would have some really heavy stuff ahead and how to pace that.

It also felt like a much more collaborative experience in Season 2, which was terrifying because you're like, "Oh my gosh, is my input at all ruining what makes it so great? Maybe I should just not share." But Justin said, "We've all lived with our characters, and now we partially are them and can add to the conversation." So they asked me what I wanted for Sam, and they asked me how I felt about those things they had planned and if there were any ways that I would like to inform those story lines.

What did you want to bring to the show for Season 2?

After Season 1, I felt like a lot of people were annoyed by Sam, which they may be in Season 2 as well, but I started to take that to heart. I really wanted people to empathize with Sam. I wanted to try to do everything I could to humanize her. I didn't like that there was this young, black, female character who offended so many people. Or maybe not offended, but [someone who] so many people almost didn't want to see. I guess it has to do with the fact that she's an outspoken activist on campus, but I think my ego got a little bit in the way and I wanted to protect Sam as a person. I just really wanted people to empathize with her.

What exactly were the criticisms of other people that were particularly difficult to internalize for you?

So many people love Sam and so many people see themselves in Sam, but at the same time, people are annoyed by a character going around with this "I'm so woke" persona. [This character who can be] hypocritical—which I'm fine with because that's all just character-driven and story-driven. I just felt like Sam went through a lot in Season 1 already, and I was like, "How much more can we break Sam down so that people are forced to feel with her?" I want you to feel with her.

Speaking of the backlash, it’s no secret that there was also this really invalid, racially charged reaction around Season 1. What was it like dealing with that ahead of the premiere last year? And did you notice that type of criticism changing in anticipation of Season 2 or have people kind of quieted down?

All it told me was that the show was right on time and that everything we said on the show has validity, which we already knew. But truth be told, the writers and all of the artists used everything from Season 1 to inform Season 2—in terms of the backlash and the trolling. That was the fuel that Justin used to write stories with. It was our true experience. The negative things people say don't get into my spirit, because they just don't seem worthy. I listen to people who actually have debates. If you have a different opinion from mine and you want to debate a topic in an intelligent and intellectual way, I'm here for it. Other than that, continue to type all you want and get all the likes you want—it really doesn't affect me.

Have you gotten any hate of that sort yourself?

I have not. I don't know how I've managed to be on a show like Dear White People and not. Actually, it could be out there, and I just haven't seen it, which I'm also okay with. Justin Simien and some of our writers did experience it though. And they told us that because they wanted us to know where this story line was coming from. It hurts me just as much to know that people I know and care about are receiving things like that, and it makes me feel helpless. But I think the difference is that someone like Justin is so amazing at satire, he's able to respond to these people in a way that not only diminishes their confrontation but also educates them.

What does it feel like to be the face of a show that is so politically polarizing in the mainstream?

I just feel a kind of responsibility that I don't always feel when I'm doing a fictional show, you know, to represent myself as Logan, as a black woman, and as an African-American actress. I feel like, at the end of the day, the show is bigger than me. It's bigger than all of us... And as an activist, I just feel a responsibility to represent myself well.

I think it's difficult in 2018 to find someone who doesn't consider themselves active against social injustices. But I try to use my platform and my privilege to give voice to the people who don't always have one. At the same time, I'm not necessarily putting myself in a position of "I am the end all, be all on all things race." I'm not educated in race politics and history as much as someone like Sam probably is. I don't want to be judge and jury on the topic, but I can add to the conversation from a human standpoint, from my experience as a black person and the experiences around me and the research that I have done.

On a lighter note, what is your favorite part about working on the show?

[Laughs] Every time someone says, "On a lighter note." That is literally my favorite part. We get so deep, and it gets so dark, that everyone forgets the show is a satire. It's funny, there's comedy! That's what makes it so much fun. There's so much negativity in the world, and so to be a part of something that is actually adding to the conversation and is thought-provoking and educational is cool. [But Dear White People] also gives you an escape from all the bullshit that goes on around you by just making you laugh. I just love that the show is humorous and is a respite from the crazy, negative world we live in.