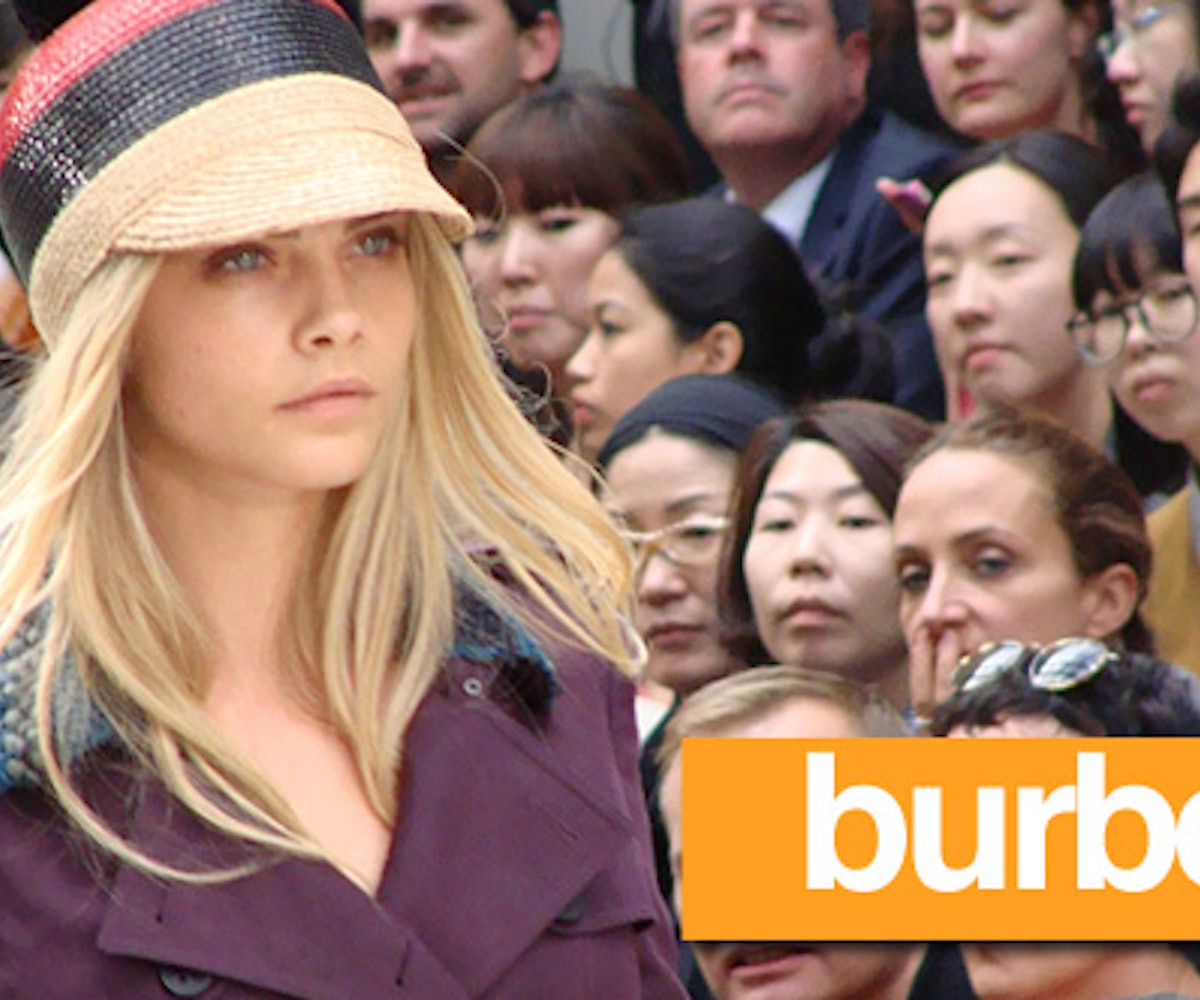 I took a wrong turn on my way to Burberry and ended up in front of an elementary school. A clump of scrappy boys - they must have been six or seven - were tearing down the sidewalk in rumpled little blazers and snack-stained slacks. The smallest one shouted at them as he scraped across the street, "Wait for me!

I want to be part of the adventure!" (Cue the Love Actually casting director.) The thing is, the Burberry Prorsum show kind of connected to that little boy's desire for some sort of epic journey, even if it was unknown, and scary, and slightly too big for his tiny Converse sneakers. To get into Burberry's massive fashion tent, you have to wind through a series of wrought-iron gates, then a series of humorless security matrons who call you "love" as they check your ticket to make sure it's not fake. (How anyone can fake a piece of wood burned with Burberry's signature check, I'll never know...) Once inside, you walk straight into a 3-D projection of Rosie Huntington-Whitley, who's posing with an eerie plum smile as glitter falls all around her trench coat in 3-D. If you saw the Kate Moss / Alexander McQueen version at the Met (or, if you were really lucky, on the Paris catwalk circa 2006), you know a fashion hologram can be an unsettling and magical experience. This one certainly is. Onto the inner sanctum, where Kanye West, Sienna Miller, Rachel Zoe, and Lily Donaldson cram onto the front row bench while Skins darling Kaya Scodelario, model Julia Restoin-Roitfeld, and various members of The Heartbreaks sit further back. Cara Delevingne opens the show while her sister Poppy snaps photographs and proudly grins to her seatmate, Hayley Atwell. There are raffia trench coats and snakeskin lock-belts, and striped straw baseball hats that your senior fashion editor, Michelle Reneau, needs.

There are some army-green utility jackets lined in shearling, and a bubblegum purple trench, that you need. There is Joss Stone blaring on the sound system. And then, suddenly, there is an explosion of gold glitter going everywhere - the models, the celebrities, the air, your hair... And it's over. Except, it's not quite - Burberry is selling some of the clothes online right now, and streaming the video, too, which means even if you haven't caught up with the adventure yet, you can grab a glass of something very English, like ale (although we'll settle for a vodka soda) and watch the whole thing over and over again via YouTube.