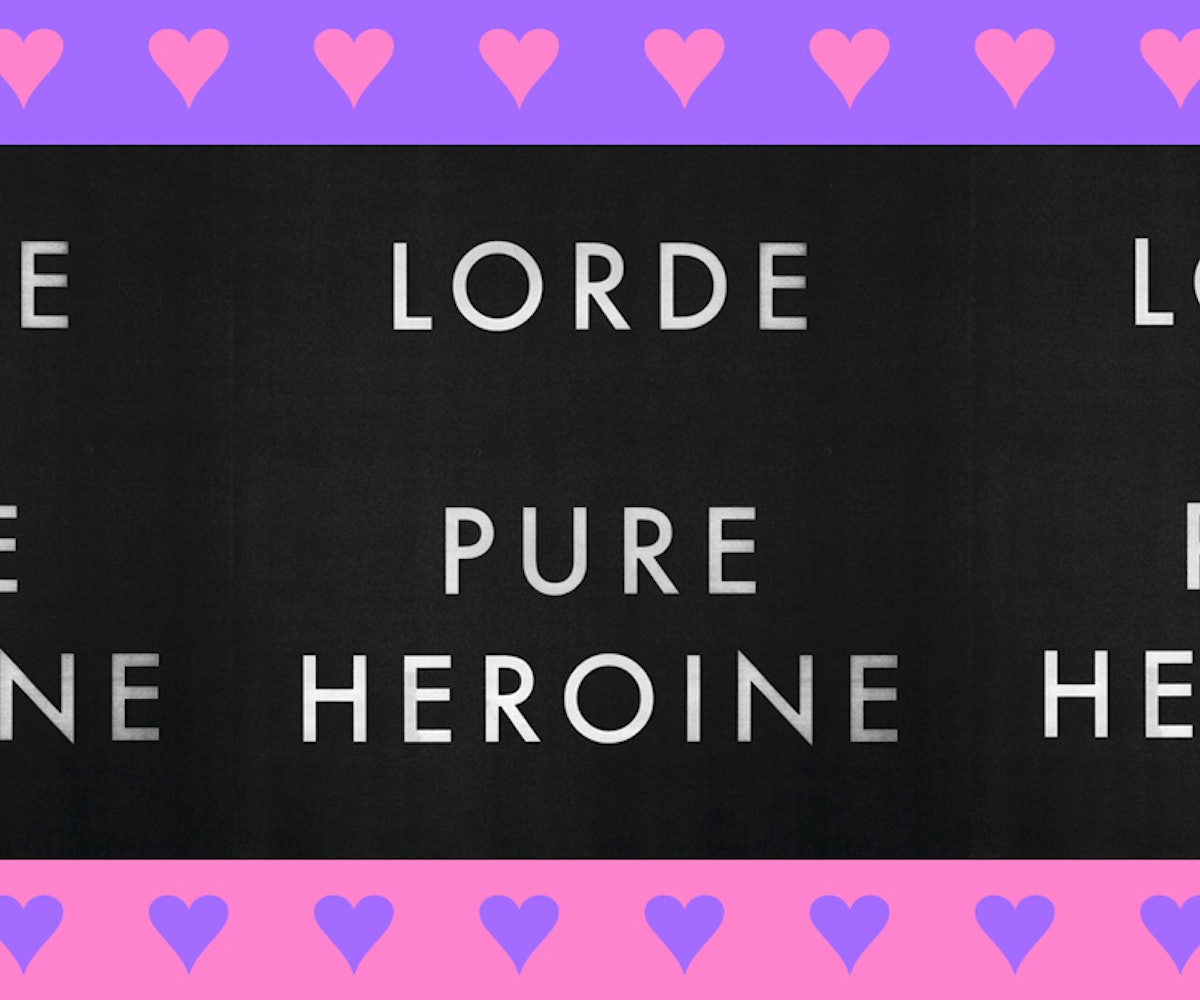 All my friends have a story of the first time they listened to Pure Heroine. Mine goes like this: It is 2013, and I am 19 years old. I see a girl, curls flipped over her forehead, looking into the camera. On her lips, she wears a smirk like a challenge. When she sings, her voice is old and young at the same time. Let me be your ruler, she says, lengthening the "u" as though it is elastic, as though the words bend to her will. I am entranced by her, by the stillness with which she sits, by the eyeliner I desperately try to copy. I play it over and over on my laptop, in my studio flat in my new country, and that night I go to the flat of a friend and play it through the speakers whilst we get drunk on red wine. Over the next months, I have a roster of songs I play through my headphones, wandering along the pavement after nights out, or winding through the city on the metro. I say their names aloud: "Ribs," "400 Lux," "White Teeth Teens."

Ask any woman in her early 20s to speak about Pure Heroine, and they will talk about it as being like a diary of the end of their teens. It's a difficult time to articulate; so many songs that try to capture it seem hokey, written by a group of middle-aged men and focusing on a fantasy version of teenagerhood, an American high school stereotype. Instead, Pure Heroine foregrounds the messiness of the period, of being in-between—uncertain and unglamorous in a time when it feels harder than ever to be a young person. Pure Heroine made us certain that Ella herself felt it—that she was one of us, despite her fame. She addresses this directly on the album, wide-eyed at her newfound celebrity, yet cautious of how it will jade her. She’s just as we would all be; transforming what could be a sense of remove from her listeners into something that brings us closer together. In a world where people continually dismiss the experiences of young women, it felt important that here was something made just for us.

It’s this that lends Pure Heroine its sense of community; spurring conversations with other women in bedrooms, taxis, pubs. When I spoke to my friend Lorna about the album, she noticed how Lorde’s songs "somehow felt like they were this secret thing just for teens on the internet." This sense of sisterhood is something that I’ve often noticed when talking about Lorde amongst friends, and the response to my social media callout asking for anecdotes was warm; people wanted to share their experiences. Many of them revolved around first listening to the album with friends, or seeing Lorde on tour with the women they loved. Communicating via email, Bella talked to me about the way in which Pure Heroine acts as a code between girls, explaining that she went to see Melodrama tour "with friends who I had known for a while through being part of a book club, but then we'd all found out we were obsessed with Lorde, and formed a group chat, called Lorde support group, and went to the gig together. All of us were so earnest, so excited to go, and we all got soaked from the rain outside and extremely drunk on white wine. One of my favorite memories is grabbing my friends and us all shout-singing, arms 'round one another's shoulders, 'We're on each other's team.”’

We’re reeling through the midnight streets

Five years on and listening to Pure Heroine brings that same rush. Entering adulthood is about finding new experiences, searching every night for new places, new people. Clubs with pulsing neon lights, the underwater light of 5am public transport, cold beer bottles against your lips. Cigarettes resting on your teeth, someone’s hip against yours in the scrum of the party, scuffed knees. It’s these images that stick in your mind after listening to the album. Everything feels heightened, and it’s this that Pure Heroine so perfectly encapsulates. On "Ribs," Lorde’s voice speeds up, synths blurring, until she acknowledges: that will never be enough. Itfeels momentous in its simplicity, in its recognition of everything moving too fast, too soon. My friend Lorna explains: "Yes, it's about fame, but I think the feeling of being a teenager, going out and going to parties—to explore the world and find new experiences. Maybe feeling disconnected to those things, and them not quite living up to your hopes, is something that I definitely heard reflected in the album."

On "A World Alone," the noise of conversation grows as the music fades out; reflecting a party both thrilling and claustrophobic. It's this feeling of being out of place that’s articulated throughout the album, of being acutely aware that this is the start of something you aren’t yet sure how to deal with, of a test that you haven't yet passed. It’s about negotiating romance and sex and friendship when they seem more complicated and more exciting than they did before. Speaking about her experiences of listening to the album, Ava said she found the album tied up with the "weirdness of suddenly being attractive to people—mainly older men in clubs. That weird, liminal power and vulnerability that young women realize that they have." Pure Heroine explores sexuality and desire with a similar gaze. There’s the sweet pang of budding romance: you buy me orange juice; as well as the exploration of more direct lust: we're biting our nails, you're biting my lip.

It feels so scary, getting old

The thing I heard most often from friends when asking how they related to Pure Heroine was its understanding of the simple heartbreak of being a teenager, of being able to grasp at freedom at the very same time you are losing it. As Ava says, "I think so much of that album feels like simultaneously a yearning to be older and a despair for already being too old. The sadness of adolescence I guess?" It’s something I heard repeated throughout my conversations: Rachel detailed how her life felt "overwhelming" when she first listened to it, and Laura mentioned that it spoke to her at a time when she "was dating too much, drinking too much, in a shitty job."

My own moment of sadness comes nine months after I first watched the video for "Royals," on a coach weaving its way through Finland, returning from a friend’s party on the coast. After a ferry ride, I arrived back in Stockholm, where I had lived for the last 10 months. Soon I would no longer live there—no more running down the hot concrete pavements at night with my friends, yelling the lyrics to songs into the pitch black. I will move back to the U.K., to a city I do not like. I can feel the sadness fizzing in my bones. On shuffle, my Spotify plays "Buzzcut Season": And I’ll never go home again. I listen to it for the rest of the coach journey, tears smearing on the window. It feels like the end of something—my life there, my teenage years. It’s a line that’s come up a lot when talking with my peers about the album; Bella highlights how it "breaks [her] heart with its ferocity and pathos."

I'm little, but I'm coming for the crown

Your late teens are a precipice: There are a few years, at most, between being too young to determine your own life and being old enough to have to shoulder responsibilities. It’s what Rachel calls the "muchness" of being a teenage girl. You are stuck, mourning for something you are not sure existed: not quite young enough, not quite old enough. Lorna described Pure Heroine as "giving me permission to not totally have everything figured out yet"; I’m not in the swing of things yet. You can already feel the shape of the life you yearn for, the outline of the version of yourself that you want to project, but they’re fuzzy. Ava tells me of "that feeling of being on the brink of something, of adulthood feeling terrifying and thrilling simultaneously." We share our bed like little kids, Ella sings on "Ribs."

We may still be childish, but it’s only a parody of a time that we can no longer return to. You feel as though you’re in a bubble that doesn’t quite make sense to anybody outside of it, only you're waiting for something bigger. And nothing’s wrong but nothing’s true/ I live in a hologram with you—it’s like a split lip, the blood trickling out before you sense the pain. You never feel more alone than at this time; there’s a moment in "A World Alone," where Lorde’s voice grows so intense that it sounds as though it is cracking: All the double-edged people and schemes/They make a mess then go home and get clean/ You're my best friend, and we're dancing in a world alone. It feels like she’s pleading; desperation mixed in with both naivety and world-weariness. What’s miraculous about Pure Heroine is that, whilst listening to the album, we no longer felt alone—its power is in its empathy. Five years on it’s undimmed; still a lifeline to all the girls who aren’t quite in the swing of things yet.