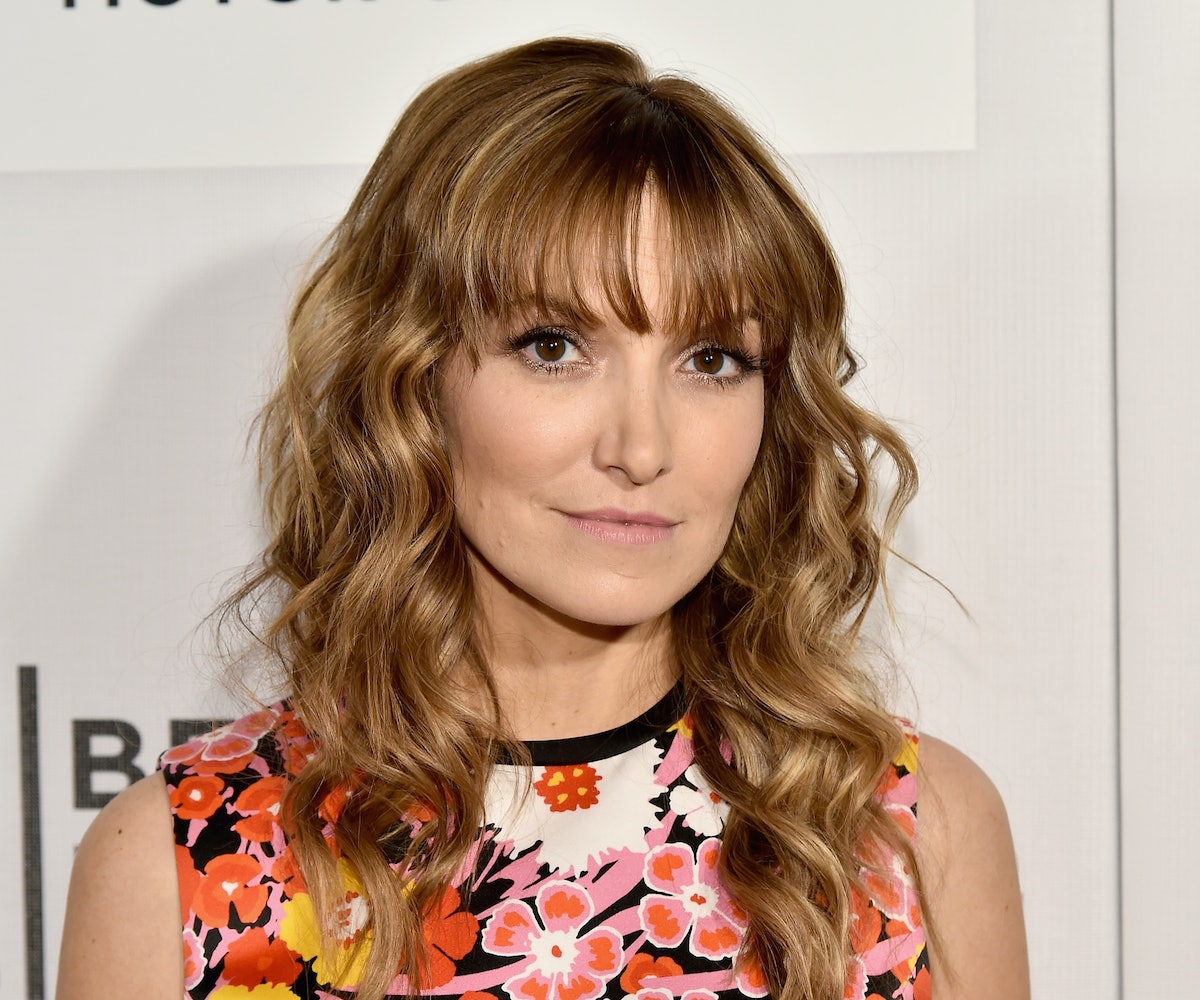 When Lorene Scafaria's father passed away, her mother Gail moved from New Jersey to Los Angeles, so that she could be more involved in her daughter's life. But Scafaria (Seeking a Friend for the End of the World), was in the midst of building a career as an in-demand writer and director, and her mother's constant meddling was proving to be a bit of a nuisance. Little did Scafaria know, that it would become the premise for her most personal film to date.

In The Meddler, Susan Sarandon and Rose Byrne star as on-screen proxies of the Scafaria women, as they come to terms with the loss of their family's patriarch and their new reality as neighbors in a Los Angeles that may not be big enough for the both of them. But don't get it twisted. The film is a love letter, not an indictment, and as Scafaria told us when we spoke to her at the Tribeca Film Festival last week, her mother couldn't be prouder.

Here, we catch up with the director to talk about the trials of making a film with two female leads, teaching your mom how to text, and what it's like writing letters to Beyoncé.

You must really love talking about a film that you worked so hard on.

I love talking about a film that was hard to get made that actually got made, yeah. I don’t mind talking about my mom, either. It’s all been really fun.

Why was it so hard to get made? Do you think it has something to do with your gender?

Not my gender. I don’t think it has to do with mine.

Yeah. I think, probably, a movie about a woman of a certain age was hard to get made. I mean, people certainly asked if she could be younger. They asked if it could be a two-hander. They wanted the daughter role to be just as big, and I thought, that just kind of defeats the point of the whole movie, actually. To really see what a meddler is like when her daughter isn’t calling her back. So yeah, plenty of things were said that I didn’t want to change or compromise.

Did they ask to make the male roles more prominent?

Sure. More prominent. Make them show up sooner. And to me, that also would have missed the point. I mean, she’s a widow. If anything, she’s reluctant to open her heart up again. I didn’t want to make it a traditional mother-daughter story, or a traditional romantic comedy. I really wanted it to be a character study about this woman, and what it is she’s going through and how she navigates grief and finds her way.

How many people came up to you after the film—daughters, especially—telling you that they can relate to the kind of mother-daughter relationship that you portrayed?

Like every single one! Which blew my mind because, of course, I specifically thought I was writing about my mom and her unique way of being generous. And obviously, all the other little character traits that I think of with her. It’s been funny to see how different cultures can relate to this, too.

Maternal meddling is commonly associated with Italian, Jewish, and Greek mothers. Do you find that it’s a lot more universal?

Apparently! We were in Miami, with the film, and so many Latina girls were coming up to me, going, “This is my mom, this is my mom.” And other moms going, “This is me, this is me.” But, yeah. It’s been a trip. And even more so than just the mom stuff. Many people come up, and have stories of grief or have stories of loss that they want to share. So this has been such a cool experience for me because, you know, I would’ve thought all the questions would’ve been the same, but a lot of people would raise their hands and just tell me, “I lost my father when I was 18 and this was what happened.”

Mom texts have almost become a subgenre of comedy.

I know! I was hoping that people would start #TextsFromMom or something just to get this going. Because yeah, it seems like it is. That was where the story started. My mom moved to L.A., and moved to the palazzo across the street from the Grove, went to the Apple store, got a phone, and then called me. And I was like, “Yeah, everything’s different.” So that’s why the story starts there with her getting the phone. Because to me, that was her literal lifeline. And also, I mean, for all of us in a way, it’s like an escape from loneliness. The Internet, as dark as it is, is also a place for people to realize they’re not alone for lots of weird things. But yeah, she calls, she texts all the time. We text each other. I remember teaching her how to text.

I think everyone our age has gone through that at some point.

And she would text, and it would just be like “calma” and it would be like C-A-L-M-A. She hadn’t figured out spacing yet. And now it’s like, forget it. Now she just sends emojis and mile-long texts.

How big of a role does L.A. play in the film? There are so many films and television shows that take place in L.A. and tell uniquely L.A. stories. What is it about that city that is so rich for storytelling?

Do you prefer New York?

It’s hard to say because I got dogs and now my life is pretty dog-centric and all about having a yard. So, I miss New York, because L.A.’s so spread out, and so hard to navigate. You only see your friends that live on your side of town. So I totally miss New York and I miss Jersey and everything. But what I wanted it to be was an L.A. story through my mother’s eyes. Through, like, mom-tourism. So the Grove being the greatest place on earth, I did kind of want to see a different side of it. Not just the L.A. that we’ve kind of seen in a lot of movies but to really see it from the perspective of someone who just got there, and what parts of it to them are most interesting, and how ultimately when you live out there, you realize how much of it is your house. You’re at home. You’re in your car. You’re at home. That’s about it.

How invested is your mom in your career? Does she understand the way Hollywood works?

I don’t know if she understands how Hollywood works, but she has been invested in it forever. She’s been, I wouldn’t say living vicariously because it’s not like she had these big dreams or anything, but the way that any proud mom would be about anything. My mom thinks whatever I’m doing is so cool. She’s like [with an accent], “Oh my gawd, you have a meeting at Warner Brothers? Oh my gawd, can I keep your ticket stub?” And I’ll be like, "That’s not what it’s called, and I’m stressed about it, and it’s work." It isn’t all, like, cool to me, when you’re in it and actually worried about it and everything. But she loves to, sort of like the character, say the word “pitch,” and be that excited to go on the set. She was on the set of my last film every single day.

She was! I thought I was going to get fired. She was telling Steve Carell, like [with an accent], "Oh, I loved you in that last scene." And I was like, "Just, stop." But she brought two chairs in case anybody wanted one, and I was like, "Nobody needs a chair! This is fine." But I didn’t have her on set at all with this one because I didn’t want her to get in the way. I mean, Susan really is playing my mother. So, my mom thinks it was her idea to stay away from the set, as if she was the one who didn’t want to get in the way, but, yeah, I didn’t need to do that to Susan or myself.

Did she develop a relationship with Susan at all? Would she call Susan a close, personal friend?

LS: No, but she still would just use her first name. She’d certainly say, “Susan.”

As long as she’s not saying “Suz.”

Suz! Yeah, thank god! Yeah, we had a three-hour lunch. We had a double date with Rose and Susan that was really fun. I only kicked my mom under the table once. I guess between that, like the first few minutes of the movie that I shot with my mom, showing her that, sending her all of my mother’s voicemails, and then this three-hour dinner, putting her in the clothes, I guess she just sort of sucked the soul right out of my mom. I don’t know how it was possible.

Why do you think this film had to be a film, as opposed to a television show. What can you accomplish in this medium that you can’t in television?

To me, it was about peeling back the layers of what it means to be a meddler and seeing her alone. And, I don’t know that you want to watch that for five years. I just thought, I just want to tell her story. I’m not interested in opening it up and having some big ensemble, Los Angeles story. I just wanted to see what it’s like to really experience someone’s loneliness and open them up to connections again, and, you know, give her a happy ending. I guess it was, partially, that I was so insulted at the idea that, I remember being told female characters are allowed to flourish more on TV, and I thought, "Well, sure, but…"

Absolutely. I mean, that’s just it. It’s so hard to make a film, in general. I know that to be true. There are plenty of people who are struggling to get anything made.

How many meetings do you take a week?

I avoid a lot of them. I don’t do the water bottle tour that much anymore.

Why is it called the water bottle tour?

Because you get a water bottle every time, and you just throw them in the back seat and eventually your car’s just filled with water bottles. This movie was so hard to get made. Really, really hard to get made. It took years of people sort of discouraging me. I left an agency. I was absolutely determined to make it as a film. It just meant so much to me. You know, I just sent a ton of letters to get favors from various people, from the mayor to Apple, to Beyoncé. I actually wrote a letter that said, like, “Dear Beyoncé.” It was ridiculous.

How did you get the rights to that song?

Diane Warren wrote it, Beyoncé sang it. Both of them had to sign off on it. Again, all these letters I wrote. No two letters were the same because it was all about telling everybody the truth, really. I didn’t have to lie. I was able to say this is the song that my mother played on a loop. This is what the song meant to her. She wanted to put quotes from it on my father’s headstone! That’s how much this song meant. And so, you know, you tell people the truth. And I think people just felt like it had a lot of goodwill because it all came from a good place. I mean well, just like the meddler.