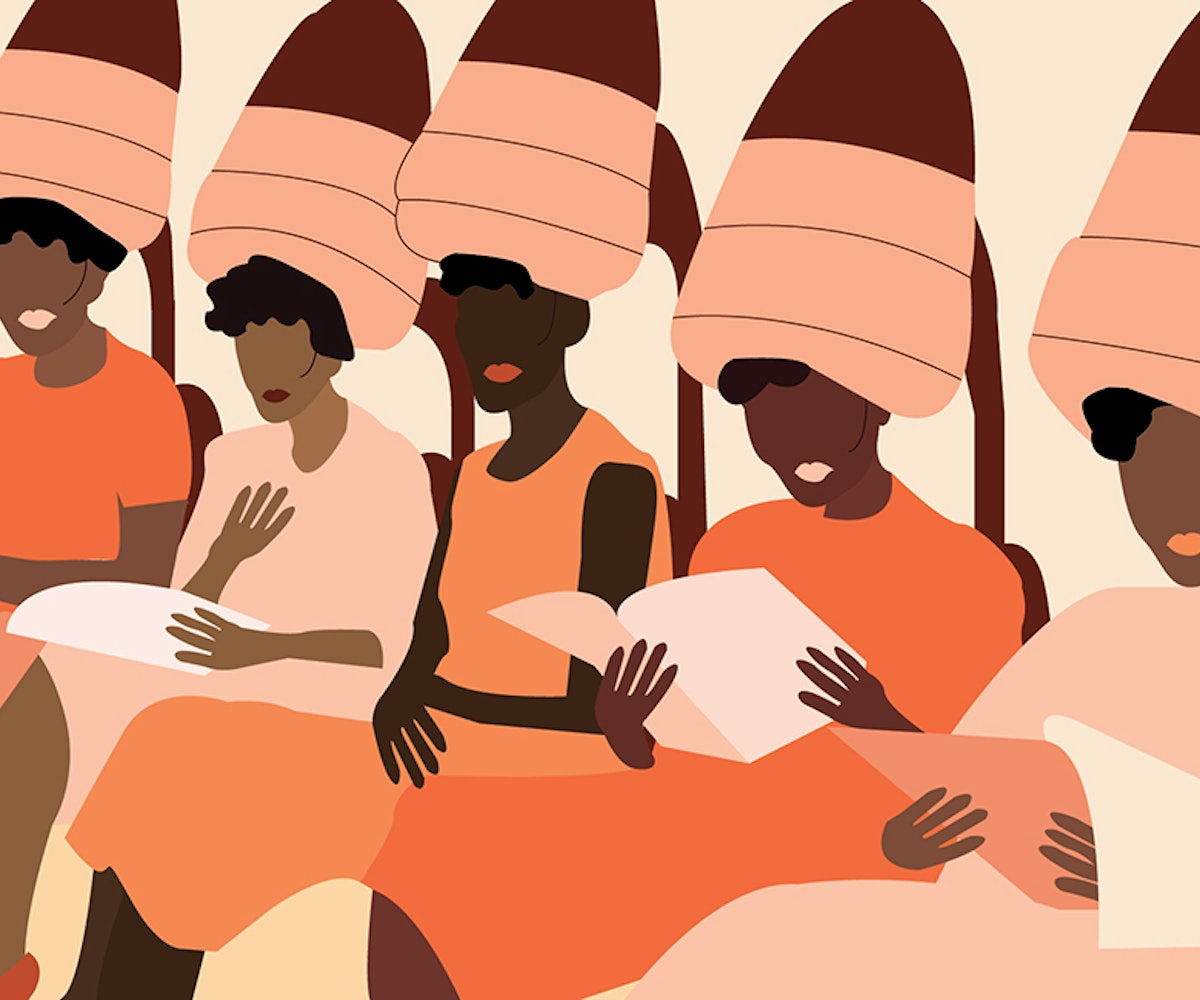 I only just learned how to do my own hair a couple years ago. Up until I went natural, I relied on stylists to chemically straighten, blow-dry, and curl my hair for me. I headed to the salon, dutifully, every two weeks for maintenance, and every two to three months for a relaxer. My formative memories don't just include my first kiss, but, also, the first time my scalp started burning from the ungodly concoction. I like to say: If you want to get to know a black woman, ask her about her hair. But if you want to truly understand a black woman, go with her to the hair salon.

The salon is to black women what the barbershop is to black men. It is a place to treat yourself, yes, but it also doubles as an oasis of gossip, a safe space and sanctuary for people to congregate and escape. At the salon, as much time is spent dissecting episodes of The Wendy Williams Show or the new Jazmine Sullivan album as current events. Stylists juggle debates amongst each other, along with those issues and concerns brought in by the clients rotating in and out the chairs. People in the neighborhood stop by; they loiter, they sell things, but usually, they just come to say hello. The salon is a microcosm of the black woman's experience.

When I first started going to the salon, I wasn't old enough to be a part of the attendant conversations. I was young and unbearably shy and didn’t have enough experience, knowledge, or gumption to weigh in. So I observed and listened to the tea spilled concerning so and so’s divorce. I snickered when the daughter of one of the stylists got yelled at for getting a tattoo. I also took in the women themselves. The salon is the most foundational image I have of black beauty. In hindsight, this may be skewed in one specific direction, since most women came to have their hair straightened, and not for a heat-free, natural style. But it's an important one nonetheless. I didn’t realize it at the time, but being surrounded by boisterous, free-willing, confident black women helped me grow into one myself.

I came of age in salons that housed sinks in the back and offered a lineup of seats toward the front, where customers would sit, waiting (and waiting, and waiting), reading the same dated magazines for the third time. I sat there for a while, too, while my mom had her shoulder-length hair styled and updated her stylist-turned-friend in whispers about whatever it was I was too young to hear. I graduated to the swivel chair eventually and created my own repartee with my hairdresser, who has seen me through more milestones than have most people in my life. He was there to put the final twist in my hair before my middle school graduation and the final curl before prom. He was there with scissors ready when I broke up with my boyfriend of three years and wanted a change. He was there when I eventually came back, ashamed of my brief stint with the Dominican hair salons that left my hair damaged and broken off. And he was there to wean me off my relaxer after I made the decision to embrace my coils.

I do my own hair now. A lot more women do. Since the natural hair movement, the relaxer business has declined, while the demand for styling products has grown. As a result, black women aren’t frequenting the salon as often as they used to. It feels like a different life, the one I lived back then, when my butt would go numb waiting for my stylist’s chair to finally empty. I save more money now, and I wouldn’t dare fall back into the "creamy crack" habit of my past. It’s always been a strained, love-hate relationship, but I have a nostalgic longing for what the salon stands for: community and solidarity.

There's one time in particular that makes me think of the salon as a place to be when times are bad. I was in the salon when George Zimmerman was found not guilty of murdering Trayvon Martin back in 2013. It was the only time I experienced the salon being a somber space. But though there was disappointment in the air, there was no shock. This is just how these things pan out for us, was the unvoiced declaration of everyone there. But, in-between the silence, was also an understanding that, though the outside might not always be safe, there, in-between those four walls, we would always have a place where we are welcome.