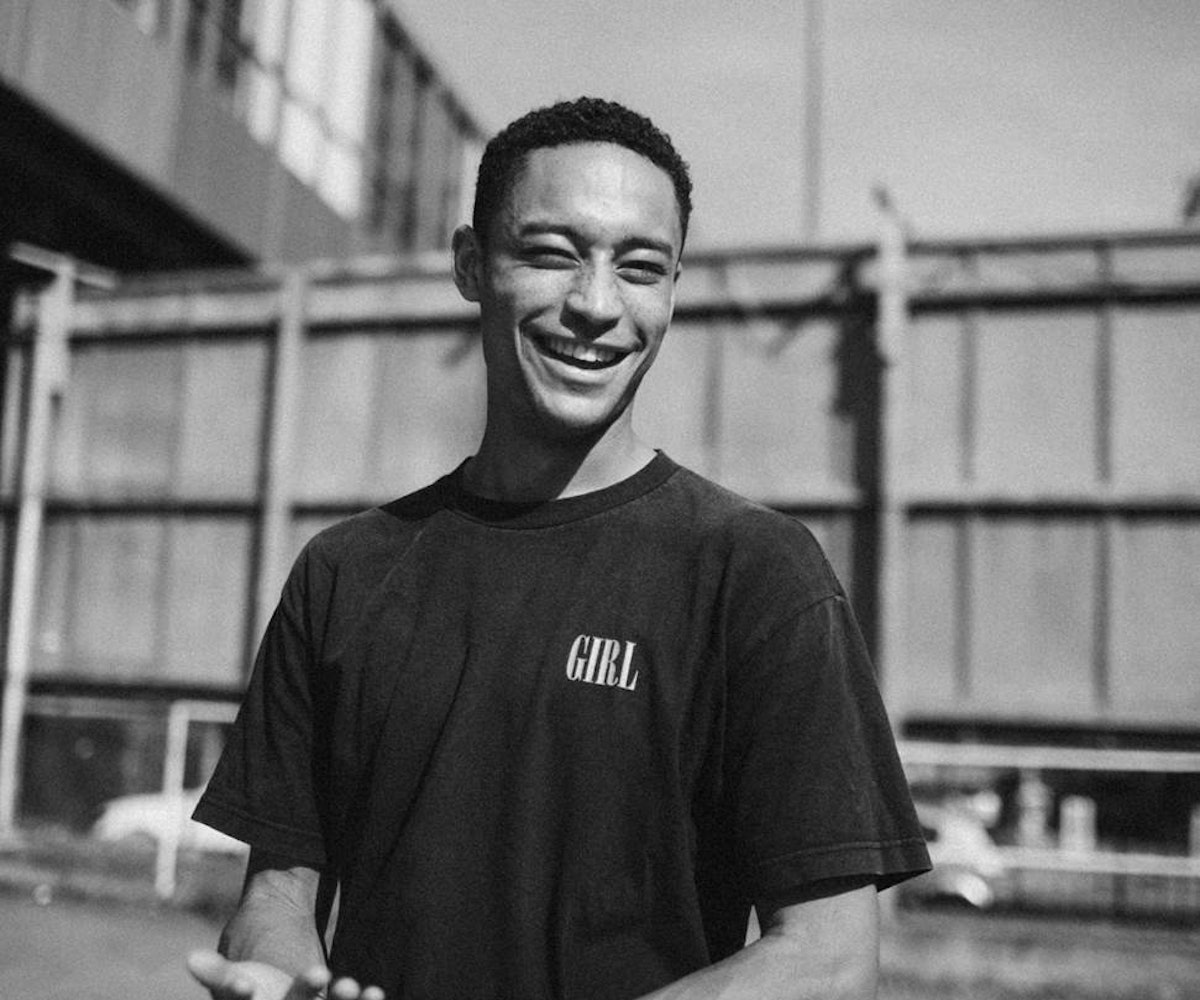 Loyle Carner is a man constantly in motion; the day I ring him up on the telephone, he's on his way out to pick up his girlfriend from the airport, a task for which he's running late. Earlier that morning, Carner had messed up his hand from building beds and cabinets at his mother's house. It's just another day in the life of Benjamin Coyle-Larner.

The 21-year-old was raised in Croydon and South London. He made his first mark on the music world in 2013 after sharing some of his music on SoundCloud. The following year, he released his first EP titled A Little Late. Since then, Carner has been working hard on his debut full-length album. While it doesn't seem like he has a lot of spare time, last year he launched Chilli Con Carner, a cooking school for teenagers with ADHD.

Naturally, he hosted a dinner party for the listening sessions of his long-awaited Yesterday's Gone LP. The record features other rising talents (and some of his best mates), like Tom Misch, Kwes, Rebel Kleff, and Jehst. Oh, and you can't miss his parents on the closing track.

Yesterday's Gone is out now on AMF Records. Learn more about the man on the mic, below.

Could you tell me about your childhood and where you grew up?

I grew up in South London, I grew up in West Norwood, and then I moved to Croydon when I was like 14. In Croydon, I listened to a lot of music from my mom and dad, like David Bowie, Bob Dylan, those kind of things, and then I found hip hop kind of around the same time, so we would share the different kinds of music we were discovering back and forth.

Can you recall a distinct early memory with music?

Yeah, there are two sort of big things.

How did you get into writing and performing songs?

I was in love with Benjamin Zephaniah when I was very young. My mom bought me a few books he had written. I knew he was a poet because we used to study him at school. Being dyslexic at school, I would really struggle to write critically for other people, but I was always very good at creative writing, like poetry, letters to a loved one or whatnot, so I found [writing] a relief. One of my best friends passed away when I was really really young, so I wrote a poem about it and from there on I realized, "Okay, I can write to make sense of this grief I'm feeling."

All of your music is very personal and emotional. Is it ever difficult for you to perform certain songs in front of people?

It depends, it really does depend. I mean, some days it's really, really easy and other days it's a lot more difficult. I think it depends on how emotionally invested you are in that day. Like, if you're on tour for six weeks, you can't kind of maintain the same state every day, seven days a week. Just from what's happening that day, you'll be more intense than others. Usually, I'm okay with it. There was a little time when I had to stop playing a couple of them just because I couldn't quite handle it, but most of the time it's cool.

What was the point for you when you realized you wanted to fully pursue music?

It's funny, I never really made that decision. It kind of just happened. I wasn't thinking,

Oh yeah, I'm going to make cash and do it like that and blow up and whatnot

. I don't think any of that's happened yet. I don't know, it was just like a slow evolution. I had to start when I was in my first year of uni. I had to make some cash, so I had to get a job, but then it grew from there. It was almost like I fell into it at the perfect time.

I also know that you have culinary skills. How did that develop?

Yeah, I'm highly developed. My grandma and granddad, they owned a hotel in Scotland a long time ago—before I was born. It instilled in them this need to kind of look after people because my granddad used to run the kitchen, so they would cook all the time. There was always something for everybody, and they used to teach me all the things he'd picked up in Scotland in the Navy. I picked it up as a family tradition. It's just something that we do together.

Why did you want to start conducting cooking classes for kids with ADHD?

It was partly for myself and also because I found some peace when I was cooking, and I figured if it worked for me, it could work for kids in a similar situation. So, when I got a little bit of cash from the music, I realized I wanted to do it. My friend Mikey Krzyzanowski got in touch, and at the time I didn't know him, but he was like, "Do you want to be part of this skate project, I want to run?" I was like, "No, but I've got another idea if you want to help me put that together." He was pivotal and keeps me on my toes and keeping me moving. If I was on my own, I probably would have fallen short. So it was really him, for collaborating with me on it. It was amazing. It was one of those things where I was like, "I can just do this forever and nothing else." It was a big, big leap for me.

Can you tell me a little bit about "The Isle of Arran" music video?

It came about because I wrote it in kind of a frustrated place. I feel like it was as much about role models and having to fend for yourself with all the norms and responsibilities that are expected of young men growing up. A lot of my friends are living without their parents or grew up without a dad. A few of them are becoming dads, and I think all of them would be good dads. I wanted to just shout them out and really show the love. It's just breaking the cycle.

I also loved that you actually include your family—that's so cool. I know this isn't the first time your mom's appeared in a video, but why did you decide to do that again?

They're people I can always rely on, and I knew that they would come and sit in front of the camera. We're a team, and I want them to be a part of my work because it reflects what I'm about. It reflects my life. I wanted to reflect that in the videos. I'm very lucky for that.

I know you have an upcoming tour, but what else is going on?

I'm still in talks about getting the cooking school up off its feet for the next year, expanding the courses maybe, getting our own kitchen space so the kids always know they can come, so it can become a hub for them. I mean, me personally, I just want to fucking fall in love and get busy playing some shows. Those are my two big goals for the year ahead, maybe get a new dog.

Are you planning on coming to the States at some point?

That's big in my brain. I mean, I've got to be careful, running around. I would love to. It's weird actually, in light of current events, a few people have said they didn't really want to go out there anymore, but I think it's the perfect time to go out there and spread a little bit of love at a time when maybe there isn't as much. I do want to. We're just finalizing some Australian dates, and I hope on the way back from Australia to hit a couple of spots in the U.S. I've got family out there, I've got family in Houston. I really want to get out there for them as much as myself.

I did want to talk to you about the BBC because I know they've been really rooting for you and putting your stuff out so much. That's a huge deal.

They've been looking out for me. It's a strange thing. To an extent they have been playing my tunes, it's really weird. I don't know how to explain it. It's like getting fat. You don't know you're fat until you're humongous because every day you get a little bit bigger and it's not until you look in the mirror and say, "Wow, I'm huge," that you see it. I mean, it's happening slowly but surely, and I'm very grateful for it.