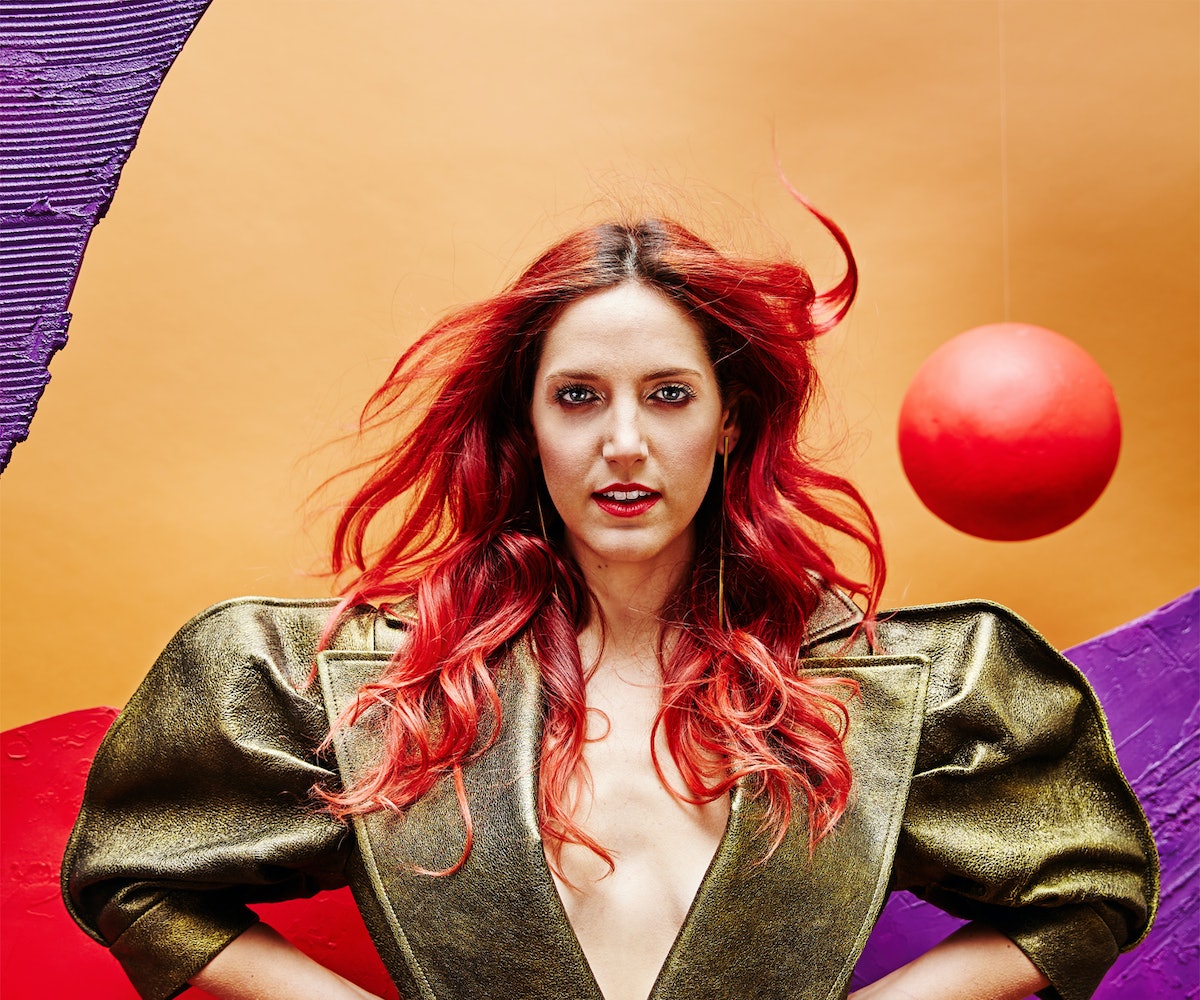 You can spot Lizzy Plapinger blocks away. Her siren red hair is a beacon of sorts, a gentle reminder that the streets of New York City still pulse with outspoken individuals who walk their creative talk. The yellow jacket she wore the sunny day we met only added to her effortless boldness. "New York is much more my personality," she says sitting outside a Greenwich Village coffee shop. "I feel much more rooted here in terms of who I am, my sound, and sources of inspiration—it all comes from here."

Plapinger is no stranger to New York City. She kickstarted her music career, along with her record label Neon Gold Records, just outside of it, at Vassar College, before moving to the city proper. Now, after two outstanding LPs and six years of nearly nonstop touring with Max Hershenow as MS MR, Plapinger is stepping out on her own as LPX.

"I want every part of LPX to feel intensified and electric, like New York City and like the bands I grew up on," she says. Luckily for her, LPX succeeds. Her first two singles under the new moniker, "Tightrope" and "Tremble" (the double Ts are mere coincidence), are the yin to the other's yang, highlighting the respective frenzied and anthemic qualities of the project. They're a departure from the glammed-out pop sounds of MS MR, nodding more toward the Yeah Yeah Yeahs and The Strokes. It's a big sound that's both familiar and foreign, and easily one of today's most exciting.

The question that must be asked of any artist who steps out on their own is, of course, why now. Why go solo now? "To evolve as an artist and as a songwriter," she says, "I needed to see what it was like on my own." Luckily for Plapinger, her friendship with Hershenow can withstand tough conversations about the future, which she says she was scared to have, and the need to explore on her own. "He really respected [my decision] because we both understand it will only make us stronger partners, especially as writers and artists." LPX, then, is a challenge, one that tests the creative limits. It's a chance to redefine and refine her identity, to explore this newfound space in adulthood, discovering what works, what doesn't, and what may be.

It isn't just the first conversation that's hard. It's really scary getting in the room with other writers and producers for the first time and raising your voice in the room. I'm only used to being in that space with Max, which felt super safe. This a really different experience. I'm learning what it's like to be a songwriter without the crutch of Max, without leaning into Derek [Davies, her Neon Gold Records partner], and seeing what I'm capable of without having those pillars of support that I have had for years.

So far, so good. LPX is giving Plapinger room to flex her punk muscles. Her love affair with black-and-white checkerboards is in full swing and (almost) no color is off limits. What else are you to do when you're the only one calling the shots? To say it's liberating would be an egregious understatement. "My whole life has really been about working in a partnership," LPX says. "It's been amazing. Now, I'm really standing on my own two feet and don't have to compromise."

This freedom has opened new doors for songwriting and sonic experimentation. After all, if there's room to play, LPX will play. "Tightrope" was the first song that clicked for her. It was written in the jungle of Nicaragua, born out of a jamming session. "It was a rare instance," she says, "usually with my lyrics, I will write poems and then translate it to music." This time, the music came first; then the words, as she says, fell out of her mouth. It's a perfect intro to the project for two reasons: (1) it's got a sound that immediately takes hold on you and (2) its trust-your-gut lyrics read like an LPX manifesto. "That song is so much about throwing yourself to risk and not overthinking it." Sounds familiar.

"I'm just interested in merging these identities of being a really powerful frontwoman while still being wholly raw and unafraid to show my flaws," LPX says. She feels encouraged when her friends tell her the new LPX material "feels like it's the most you thing you've ever released." And why shouldn't it? Her Pantone color universe is expanding to punkier territories, gritty but still theatrical; bold but a little more brash. There's an album on the way, yes, but projects this good need time to grow, and Plapinger's privileged enough to call the shots on all on her own. "I’m trying not to be too precious about it," she says. "I'm really just enjoying the process." That's all a creative mind can ask for, really: the space to make what you love at a pace that challenges but keeps you steady.

How cool. LPX is imbuing the DIY spirit back to the New York music scene with a fury only someone with siren red hair could pull off.