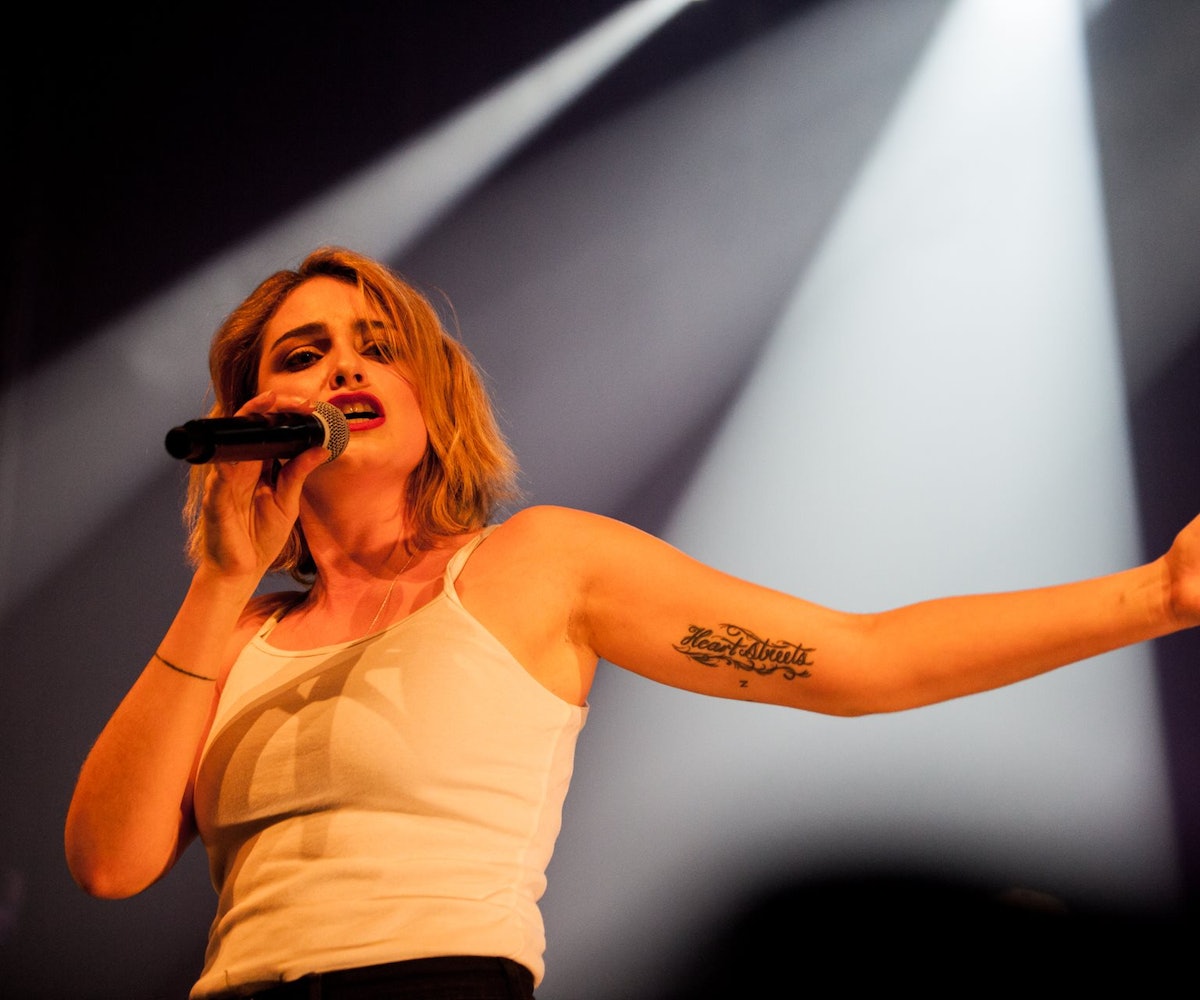 Every November, around the time when the crispness of fall is toying with the brittle chill of winter, Montreal is abuzz with heaps of Canadian bands and hundreds of international delegates eager to meet (and listen to) them. It's a week called M for Montreal, a conference with workshops, panels, meet and greets, and yep, loads of artist showcases, all meant to help emerging artists launch their career and export their talent outside of Québec and Canada.

Canada has given birth to some of our dearest and most precious creative minds, from Grimes to The Weeknd, and, natch, Arcade Fire (the band has a legendary status in their home country). We all know these names, the ones that have made it big, but we wanted to know what was next... what should we be listening to that's not on our radar? So, when M for Montreal came calling, we went without hesitation.

What followed was four days of illuminating artist performances that gave a rare and rooted look into what it means to be a Canadian musician: the long history of folk from early settlers, the language barrier in Québec (do you sing in French or English when your region is Francophone?), and how to break beyond the country's borders.

In the spirit of discovery that is M for Montreal's cornerstone, we selected our five most choice Canadian acts from the festival, the ones that got under our skin when we saw them live. These are the names you don't know yet... but should definitely add to your Spotify rotation, stat. Meet your new favorites, below.

What's the backstory to your band?Emma Beko: We’ve known each other since elementary school and have always sung together. We didn’t plan to make a band. We met up one night, I had written something, we freestyled a little bit, a little wine, and we just went with it.

Gabrielle Godon: I would say "How I Got Over."

EB: I’d pick "Cruising With You." They’re the opposite.

GG: 'Cruising With You' is the only happy, uplifting track off of the EP [You and I], and it’s the first song. "How I Got Over" is the last song and it’s about letting go when you’re mad and you’re pissed and you’re sad…

EB: But there’s humor in it, which I like. It’s about getting really messed up and wilding out—letting go in whatever way you need to in order to express what you feel.

How does being from Montreal influence or come through in your music?EB: We exist outside of it. We are influenced by our surroundings for sure, but most of our inspiration comes from ‘90s hip-hop. We like good beats. Even though our sound is very modern, that ‘90s sound and culture is present, in the rhythms or R&B delivery of the way I rap.

What are you most proud of as a band?GG: For me, every couple of months, there's a moment where I look at Emma, and I think, This is so cool, where we are right now and what we're doing.

EB: We always used to look back at Jazz Fest as a really important moment. All the biggest, most internationally known artists have played there, and we have played it twice.

GG: It's the biggest festival we have in our city that is known around the world. I remember feeling very proud about that.

What's the backstory to your band?Jason Couse: We’ve known each other since grade school. We got an old digital recording console, and one spring break smoked a bunch of hash and learned how to use it, but it was nothing serious.

Wes Marskell: Our first actual record came out in 2007.

JC: So there was a long period of time where we were going to school, university… it wasn’t planned that this was going to be a thing.

WM: When we were in university, we started a cover band, thinking we were going to get girls and free beer, like the greatest opportunity ever. We wound up being thrown into our first real gig; we were booked and had a week and a half to put a set together.

What’s the collaborative process like when you’re writing music?JC: Strangling each other.

WM: Whoever passes out first, the other person gets their way. But really, it’s very 50/50. Whoever has the initial idea the other person plays producer. We’re always going in the same place, the same direction, so we’re willing to follow ideas.

JC: If one of us says, "We have to try this," then we give that time to see where it can go. The challenge with that process is to not be too precious about anything, because once you finish going down that tunnel, if it doesn’t work out, you have to say okay and walk away.

What types of stories make the best songs for you?WM: When we were working on Centerfold, it was the middle of winter in Toronto… there’s this really, really damp, in your bones kind of cold. The kind where even if it doesn’t seem that cold, when you’re outside, you can’t escape it. So we started writing about escapism, and forgetting about what’s happening. The joke is now it’s a really great time for a record about escapism.

If someone isn't familiar with your music, what one song should they listen to of yours and why?WM: The first song on our new record is called "Studio City," and I’m glad it is because I feel like, if you don’t fuck with this, then just go home now. It’s a little more fun and loose than the rest of the record, but it’s a really good postcard for the whole album.

JC: There’s another song we both decided is our favorite, which is the last song on the record. I have a thing for last songs on records. I feel like it’s that moment where an artist gets to say, "Okay, I’ve done the things I planned to do, and said I would do, and promised to do, and this one’s for me." That song’s called "Lip Service," and it doesn’t fall into any preconception of what the record is supposed to be… it’s just pure creation.

What's the backstory to your band?I always knew I wanted to do music. My mom studied piano in school and my dad grew up in a musical household, so our household was very musical as well. I went to a musical elementary school, so half the time it was academics and the other half I was learning classical guitar, and cello, and piano, and everything else. When I was nine years old, I auditioned for Cirque du Soleil to be a singer and they asked me to come on tour with them. I left when I was 12 and worked for them for two years, and it furthered what I already knew: I liked show business, I love to sing, and I wanted to be on stage. Over the years, I slowly developed my own writing and my own sound… and KROY happened.

"River" would be a good one. I think it’s the right level of pop and weird at the same time. It has a video too, and I think it’s nice when you have audio and visuals to get a 360-degree understanding of what an artist is about.

If you could pick three words to describe your sound, what would they be?

What are you most inspired by right now outside of music?

I love design and architecture. When I need inspiration, that’s always what I go to. I think I even buy more art than I do music. To me, that’s more of a source when I want to write. It’s fun to be able to take something that has nothing to do with music and transform that energy into songs.

What types of stories make the best songs for you?

This whole entire album [Scavenger] is about impossible love, how it makes you feel and the dependence that you build up when you’re in that situation. When it’s super personal, no one can tell you it’s not real. There are so many love songs, but when you write from a place where it’s truthful, it will always be a good song.

How does being from Montreal influence or come through in your music?Jean-Vivier Lévesque: There are two scenes, like, we are very close, but it's still very apart. The English and the French scene. We are more of the French scene because we are French. But I think it's a small place, everybody knows everybody.

Sabrina Halde: We still are influenced by Canadian bands like Arcade Fireand the whole orchestral thing, so it's kind of part of us but, still there is... a very French side. We had this scandal in Québec because we went to a festival in a super-far region and there was a big politician there. He shouted he wanted a song in French because all of our songs are in English—he shouted "En Français!" and then it became this huge thing, every media outlet was talking about it.

If someone isn't familiar with your music, what one song should they listen to of yours and why?SH: "Nothing Personal." It's kind of melancholic but still upbeat.

If you could pick three words to describe your sound, what would they be?JL: Orchestral, energetic, sensitive.

What types of stories make the best songs for you?SH: I think it depends because the first album it really was intuitive, and I feel like I didn't work for it. We were just jamming to a song, and I had words already coming out.Sometimes I just reread all my lyrics, and I don't even remember how it happened. It was telling a story that wasn't really personal... it was impressions. And the second album was really about touring—we just went from touring to making the album. We didn't have too much time to relax and have a mental break. So I feel like it's me talking about surviving. [Growls]

What's the backstory to your band?

Patrick Krief: We are a Montreal-based band, led by myself. We just released our fourth album, Automanic. I'm also former songwriter/guitarist for Montreal band The Dears.

I think the song "Life as It Happens" has a good universal theme to our music.

If you could pick three words to describe your sound, what would they be?

How does being from Montreal influence or come through in your music?

It's a very eclectic palate of music growing up bilingual, and rough winters make for a sonic influence as well. Montrealers are dramatic! So is our music.

What types of stories make the best songs for you?

Stories of depth and personal nature.