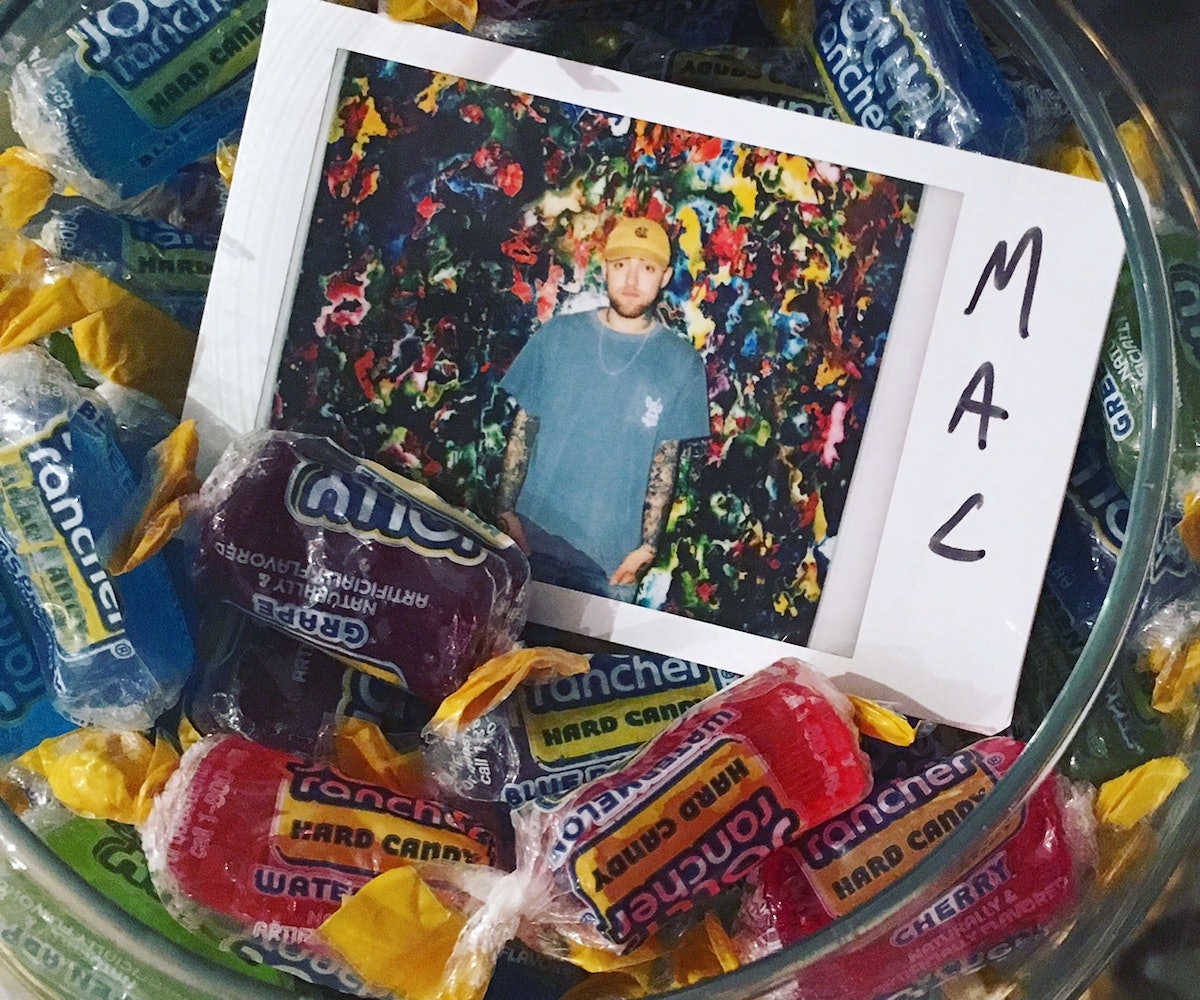 When you think about it, Mac Miller is really like a Jolly Rancher—hard on the outside, but really sweet on the inside. And just like the candy comes in so many different flavors, the same can be said about the Pittsburgh-bred rapper who has plenty of "world domination destruction" personas like Larry Fisherman, Larry Lovestein, and Delusional Thomas. During our interview, he chews on one of the candies while he finds the right words for his responses.

Miller takes his time, not rushing his answers, except when I ask him one question in particular: "Are you in love right now?" He instantly replies, "Yeah, currently, for sure." His latest full-length album, The Divine Feminine, has been labeled as an ode to a woman. Many have pointed to Ariana Grande as the muse, but Miller doesn't want listeners to get overly analytical about it. (Their jazzy duet "My Favorite Part" is absolutely precious, though.)

"It's like the divinity of the woman that you're in love with, you know? And it's kind of seeing the whole entire world in her," he says. "It's pretty simple, but also very complex in its own right. I think the more words that surround what it means, the more it gets viewed on what I'm trying to do here."

Miller isn't trying to personify the inspiration behind the album. He explains that "it's taken from a lot of different times in my life and some things that are based off desire and what you're looking and searching for." (This logic can best be explained in the track "Skin" with the lyric "I opened up your legs and go straight for your heart.") The bottom line is that this body of work is all about love, something that Mac believes is a "very powerful emotion."

At the time of our interview, Miller has been approximately 88 days sober and clean. Given that he's only 24 years old, I assumed that this decision came from a substance abuse problem. It's rare for 20-somethings to acknowledge that consuming alcohol and drugs in excess is more than a bad habit, so I expected him to tell some sort of story about going through a dark period. But this isn't the case for Miller—he'd just "done so much" and got "bored of it all." The notion of having a clear mind for once seemed exciting to him, so he gave it a try. He says:

The idea of being 100 percent clear-headed was something I realized I had never done. As soon as I felt what it felt like to wake up every day and feel good every morning, I realized how important that was for me. You can do so much with a day. I spent so many days just waiting for the next one to come. Now, I'm excited for every day, which is really great. As soon as I learned that I could do things creatively sober, then it was good. As long as I can still be creative, I'm geeked. It's even better because before, my every other aspect was destruction. Now I can do both which is important because they feed off each other.

Instead of shutting himself in, Miller puts himself out into the world. You can even hear this new mentality on songs like "Planet God Damn."

"I mean, the switch is ridiculous. The fact of how the things that I dreaded the most are now my favorite things. Like, just being 100 percent honest all the time is great and going out into the world is great," he says before adding:

I think you build this narrative in your head about the world being this fucking terrifying horrible place, and living in fear and misery is comfortable. It's easy because it's just like, "Everything sucks and I can't do anything about it." There's a lot of beauty in the world, so go hang out and go be a part of the solution rather than the problem.

While his mind is clear and his system is clean, Miller is still addicted to the drug of love. "I think depending on the type of love you're getting, it can be different things," he says. "It can be blissful, it can be painful, it can be complicated, or it can be simple. It's not just one thing and that's really what I wanted to capture with this album is all the different aspects of it."

The cover for The Divine Feminine came from a photo of a makeup mirror taken by his brother, Miller McCormick. Since the beginning of Mac's career as a rapper, his brother has been making his artwork. Their concept for this album was to portray the universe and "the world existing within this goddess of a woman."

It was through his brother that Mac was connected to Grace Miceli, better known as Art Baby Girl. She designed all of the illustrations for the singles which were also released as animated videos.

"I wanted to have a lot of female artists work on stuff," he says. "[My brother] showed me her and I was like, 'That's so awesome because it encapsulates the feeling in a different way'... The work she did was great and just the texture that she gave stuff is really cool."

In hindsight, it's sort of remarkable how successful Mac has been as a rapper. Living in a post-Eminem society, it can be challenging for white rappers to enter the world of hip-hop and find their own lane. We now see the line between appreciation and appropriation being blurred with artists like Macklemore, G-Eazy, and Lil Dicky. Mac's approach has always been one of pure authenticity, which he further elaborates on:

For me, I think it's just taking your time and not expecting everyone to get it right away and letting people question and letting people wonder what the fuck you're about and not letting it throw you off. As I learn more about myself, I think people learn more about me as well. It seems to correlate that way. I learn how to represent myself more as it goes on. I just have always felt as long as I'm 100 percent honest, then it's just me. It's a lot easier to sleep at night that way. I'm not saying anyone's not honest. I think people just don't know what to make of things right away. I think you have to give everyone some time to let their eyes settle... It's a lot of "Why are you here?" and that's a fine question to ask. I think everybody asks that about everyone. I'm figuring it out.

Mac continues to gain respect, and, in return, he has received acceptance. "As long as I can go to sleep at night and know that everything matches up together, then I feel good about it," he adds.

Along the way, Mac has befriended other creative minds like Thundercat, who he spends time in the studio with, fooling around on instruments like the cello and making "so many incredible recordings that are probably so terrible to listen to." Through Twitter, he was able to link up with CeeLo Green, which led to including him on the album in the track "We."

Some of Mac's closest and oldest friends within the industry are Kendrick Lamar (who is featured on "God Is Fair, Sexy Nasty"), Earl Sweatshirt, and Vince Staples. He points out that they all have different styles, but it's important for people to listen to all the perspectives that everyone has to offer. It's the reason that Mac wants to be remembered for is "bring[ing] as many different worlds together as possible."

"I like seeing good people win. With Vince, he's someone whose voice should be as loud as possible. No matter what platform that man speaks on, it's incredible. Same with Kendrick and Earl," he says. "There was a very special time at the crib when everyone else was just falling through and creating and everyone is in their own world and it's beautiful... You should always root for good people to win."

As far as Donald Trump is concerned, though, Mac stands by his comments against him. "Our names became associated with each other, and I didn't want one single person to ever think I was okay with what was happening. I didn't want one single person who looks up to me to be like, 'Oh, Mac Miller, he fucks with Donald Trump.' Never," he says. He adds:

I also think that I took the whole Donald Trump for president thing as a joke for so long and then it kept getting realer and realer and I was like, "Alright." I don't think anyone looks to me for their voting advice, but I'm still going to speak my piece on the matter just as I would in conversation. I got a platform to say how I felt. So that was great.

Mac doesn't necessarily think that all artists should speak out on critical issues if they aren't fully informed. He wants "the right people" to be talking about things and for others to lead by example.

"I don't like to speak on things I'm not highly educated on because I don't know what I'm talking about. For me to say that I watch everything that's going on in the election would be wrong, but I know I don't want that dude to be my president under any circumstance. I can speak on that," he says. He concludes:

I do take people looking up to me a bit more seriously now than I have in the past because it's a conversation that me and people who are listening to me are having. I want my part of the conversation to be hopeful and something that makes people feel like, "Fuck, yeah" rather than like, "Oh, damn if he's giving up, fuck that." There's no need for any type of giving up.