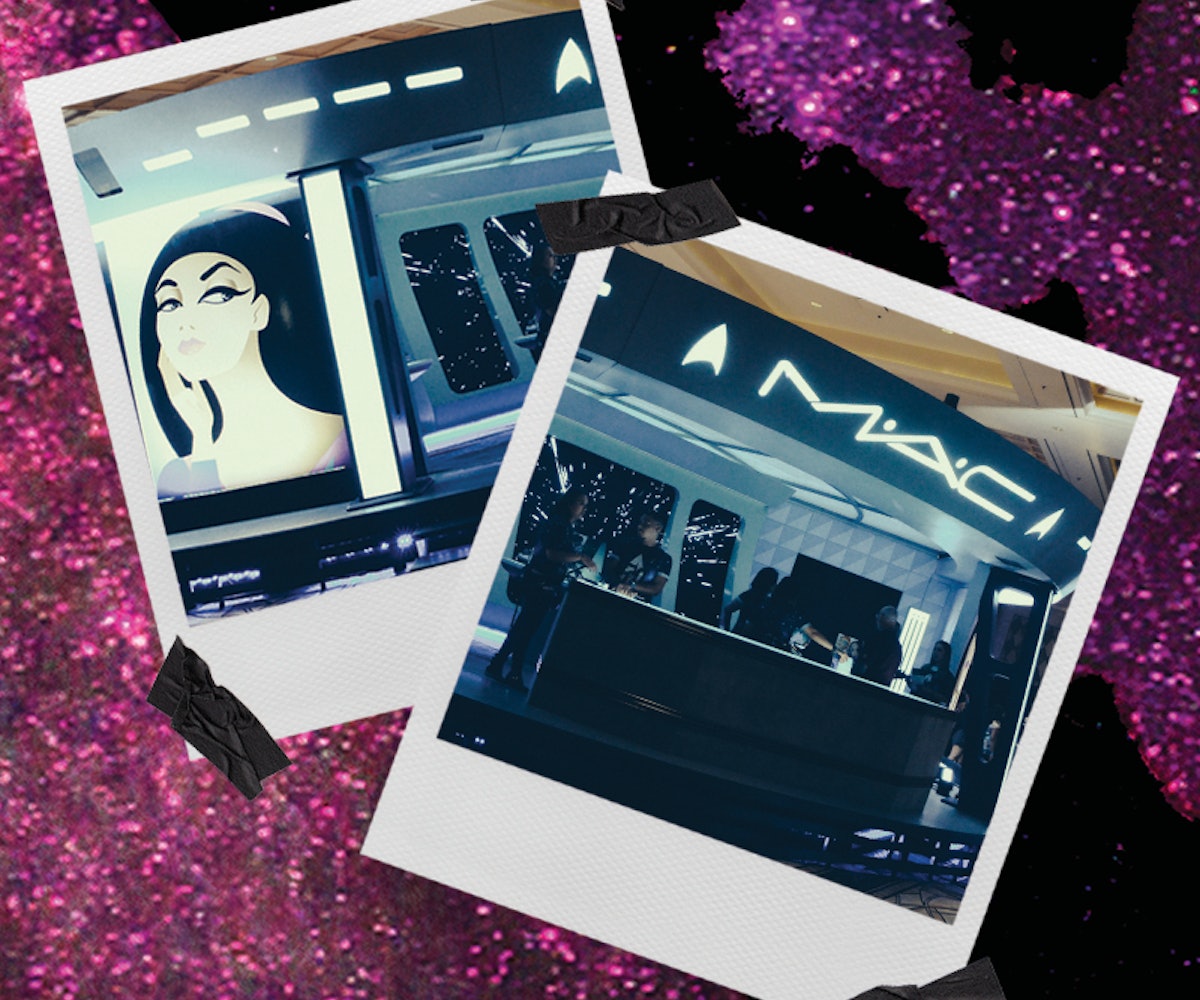 The M.A.C. booth looks like a UFO has landed in the center of the scrappy and crowded convention area vendor’s hall in Las Vegas’s Rio Hotel and Casino. To one side, a wall of stuffed animals sits below the sign “GET YOUR TRIBBLES HERE;” on another, an elaborately constructed and hand-painted “Temple of Kirok” invites conventiongoers to record their memories for posterity. There are lots and lots of commemorative plates.

This year marks the 50th anniversary of the premiere of Star Trek, and to celebrate, M.A.C. has launched a makeup collection in honor of the show and the iconic women who made it great. They premiered the line at San Diego Comic-Con this past July and brought the show on the road to the next logical stop: the Official 50th Anniversary Star Trek Convention in Las Vegas. Uhura, Nichelle Nichols’ groundbreaking communications officer on The Original Series; Vina, who danced as an Orion slave girl in Star Trek’s pilot; Deanna, The Next Generation’s empathic counselor; and Seven of Nine, a former Borg drone-turned-Voyager crew member grace the M.A.C. UFO’s exterior: models of extreme galactic glamor.

I meet with Ashley Rudder, a senior artist at M.A.C., who walks me through the four different looks these women represent. Uhura is all about contouring, highlighting, precision. (Rudder especially loves her liquid gold liner.) Vina’s “for the makeup enthusiast,” Rudder says. “She’s serving you smoky eyes, brows. She’s wearing four different glosses on her lips.” Deanna offers up an “ultra-feminine look, '90s glam.” Seven of Nine sports “the no-makeup makeup.” Whereas Uhura’s look emphasized the eyes and Deanna’s focus is on the lip, “it’s all about skin for [Seven of Nine]. Those perfect tonal neutrals.” Nodding to the model dressed as the former Borg, Rudder says, “Everything else pales against that outfit.”

Of course, I’m there to get a makeover. Or just regular makeup, but I privately call it a makeover because that’s what I will call any experience of someone performing personal beauty labor on my behalf. Rudder gets her brushes, and I enter the UFO. One man sitting beside me is getting a Borg implant drawn above one eyebrow. Rudder asks if I want Trill markings—a strip of freckles that (in Star Trek) goes from the temples down the lateral side of the body—and I decline. “I did some Trill earlier,” she says while she brushes my face with something. “I just used a regular eyebrow pencil!”

The names for the different products are pitch perfect. A lipgloss called “Khaaannn!,” a powder titled “Highly Illogical,” eyeshadow that comes in “Bird of Prey,” nail polish named “Holla-Deck,” and lipstick that goes on “Where No Man Has Gone Before.” Rudder laughs as she looks for a trash can. “In the future, there’s no trash,” she says. At least, there’s no place to put it in the UFO. A few chairs down, a makeup artist and a conventiongoer make a joke about the Kardashians and the Cardassians.

Everything feels light, a second skin. When I raise the mirror, the blue-tinted light catches the silver eyeliner. It’s a perfect convention-to-real life look, something to wear while boldly going anywhere.

I asked Rudder what stuck out to her the most, having landed in the hub of Star Trek fandom. She loved meeting the people, she said. “I was putting lipstick on a Klingon earlier, it was kind of epic.”