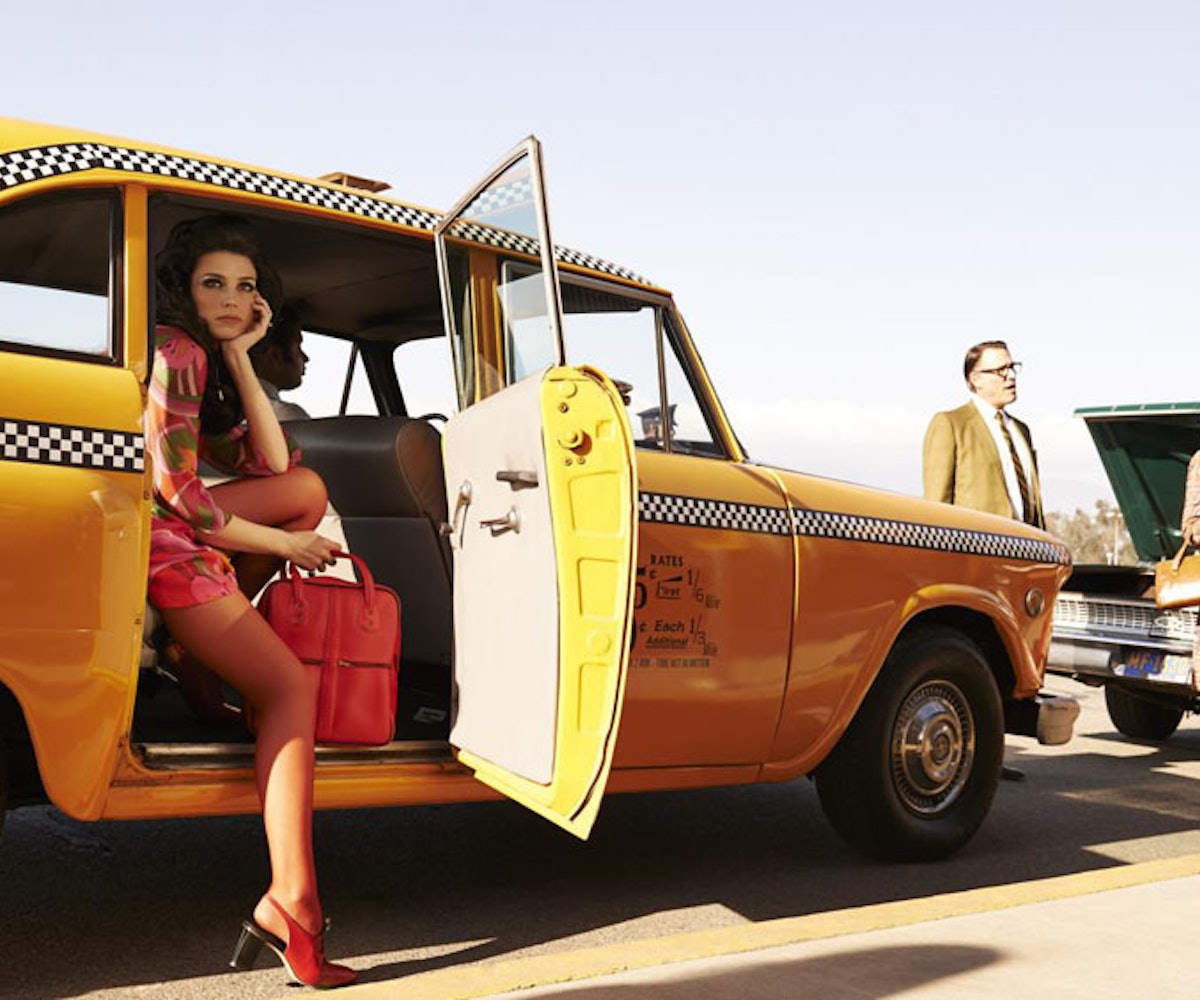 Welcome to our brand new, Monday Mad Men recaps! Obviously spoilers are all over this article, so if you haven't yet watched episode one... just stop reading now.

Season seven picks up two months after season six ended, some things have changed, and some things never will. Don's still on hiatus, feeding his ideas to Freddy Rumsen, who's freelancing around town as Don's mouthpiece. Peggy's got a new Don in her life who's just trying to make due while she's trying to make Don's ideas (that she's getting via Freddy) into realities and getting frustrated every step of the way.

Megan has moved to LA to pursue her acting career that seems on the cusp of success (though isn't that were it was last season?), while her fellow LA compatriots, Pete and Ted, are having very different experiences: loves it, hates it, respectively.

Roger has joined some sort of sex cult, while Joan is moving up the ranks into a power playing position. Get all the details we're obsessing over in the slideshow, and don't forget to tell us your theories (about Bob Benson, obvs) on Twitter and Facebook.

The Hmm Moment (because there are no "Aha!" moments on Mad Men): On the flight home from LA, Don sits next to a pretty Dr. Faye Miller-meets-Anna Draper-type woman who spills her story without caution and seems like the exact type of lady who'd be smushed into Don in the airplane bathroom. Wrong. He turns her down to return to his empty New York apartment and feel bad for himself while eating sandwiches with Freddy Rumsen.

The Look: Don is a man whose outfits rarely change. He's still in a boxy grey suit with a white shirt, but he's moved into using some color on his ties. His fedora that he wears arriving in Los Angeles is a sign that he's one of the old guard, though after sitting in the cold in his undies and blue robe, he might be trying to change that.

The Hmm Moment: Walking slo-mo in a blue babydoll dress to pick up Don at the airport. Because why did that scene even happen? Just to throw contrast on the fact that IRL Megan spends her time in her "Dracula" castle in the puffy shirt from Seinfeld watching a black and white TV? Here's to hoping Megan gets the wacky plotline she deserves this season.

The Look: Everyone will talk about the posh, empire-waisted dress, but let's not forget about her bell bottoms, men's shirt, and headscarf combo at her house. I think it's a little more telling that even in menswear-inspired clothing, she can't be the boss of her own household--Don has to buy her a color TV. (Because he's still the breadwiner, even though he doesn't really have a job.)

The Cocktail: Probably a green juice with a Pinot Grigio chaser.

The Hmm Moment: Waltzing up to Lou (AKA the new creative director), and saying she wants to do the best work, and him not caring. Peggy learned to excel at her career at The Don Draper School of Perfectionism, where work and life collide in a sloppy crash. Fine is not good enough for Peggy; so will she change or find a way to subvert Lou's power? Let's remember that at the end of season six, Peggy was the one sitting in Don's office.

The Look: Navy, orange, and ivory are the colors Peggy wears every time she's making a big career move, except this time she gets shut down in them. It's gotta be the hat that's giving her bad luck, right?

The Cocktail: Coffee. Because nothing says lingering sexual tension with Ted Chaough better than some percolating brews.

The Hmm Moment: Waking up naked on the floor of a hotel with nude people everywhere and then using a pink phone to cover up with. The LSD went straight to Roger's head, and it seems like he's having a hard time taking anything seriously, from his daughter's acceptance of him to his hippie's lover's lover.

The Hmm Moment: Joan meeting with a business professor at a university to get industry tips and then using htem to convince Butler Shoes to keep SC&P on as their agency. Joan is definitely making a play up the ranks this season, and no one really deserves it more than her. (Also interesting is that she said SC&P to the marketing director or Butler... so Draper was just removed from the company's name?)

The Cocktail: Painkillers... for Ken's eye.