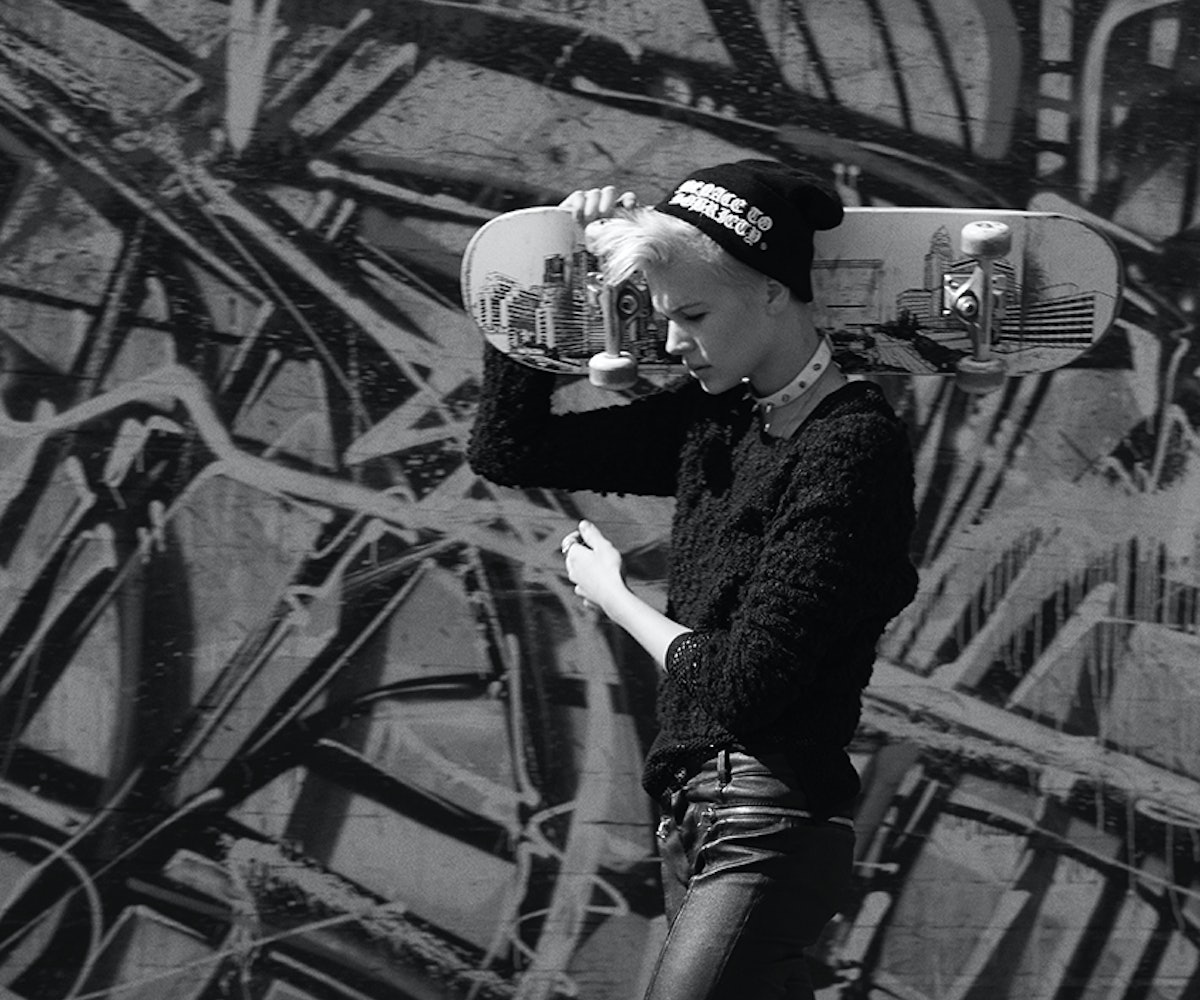 When you think of supermodels, chances are that you have a certain image in mind. That image probably doesn't come in the form of someone with short hair, and more likely, it probably doesn't come in the form of someone who skateboards. That's why we're really into Los Angeles based beauty Madison Paige. From her comfy, casual style to her badass hobbies, Paige is the modern-day super model. She doesn't represent the Victoria's Secret angels or the Claudia Schiffers of the past. Instead, Paige represents a whole new definition, a whole new era of supermodels, to rep our favorite brands; the era of the androgyny.

In the past, getting to know celebs meant you had to find an interview with them on a TV show or read about them in a magazine. These days, with social media, it's super easy to become almost-besties just by following someone on Instagram. When it comes to Madison Paige, the similarities between her life and ours are pretty awesome—including the fact that she rocks Dr. Martens!

We had the chance to chat with Paige about her favorite Dr. Martens, how she expresses herself through fashion, and what songs she'd pair up as the soundtrack to her Instagram account.

Get to know this awesome human below!

What is your style inspiration?

MP: I have always been partial to menswear. Especially the suits and streetwear. But I also love the androgynous all-black punk style. Anything black and leather, and any vintage tee.

If you were to make a soundtrack for your Instagram account, which five songs would you put on it?

3. "Given the Chance" - The Kite String Tangle

5. Pretty much anything from Jack White

What can we most likely find you doing in your Dr. Martens?

MP:Playing guitar or adventuring the streets downtown at night with my friends.

Do you think fashion is an important form of self-expression? How do you use it to express yourself?

MP: Absolutely. I don't dress the way I do for anyone besides myself. It's a personal sense of expression and individuality that no one can take away from you or avoid. It's that visual first impression you give off to the world and for me it's a materialized version of who I am or how I'm feeling.

"I don't dress the way I do for anyone besides myself. It's a personal sense of expression and individuality that no one can take away from you or avoid." - Madison Page

What do you stand for and how do you show your own #STANDFORSOMETHING day-to-day?MP:I stand for freedom, equality, uniqueness, art, and love. Whether it be gender identity, orientation, personal style, or life choices. I just want to be true to myself even if that means going against the grain or what would be considered the social norm.

What are your go-to tips for rocking short hair?

MP:Just wake up and leave it alone. The messier the better. But that's just me.

When did you get your first pair of Dr. Martens?

MP: I bought myself the metallic boots and wore them every single day until they were almost black—refused to take them off no matter how hard mom tried.

How do you style your Dr. Martens?

MP: Any thing from men's skinny jeans and a ripped-up tee to dress pants and a button up. I've got a pair of Dr. Martens for any occasion.

What is your favorite style of Dr. Martens and why?

MP: The pair Margaux gave me on set the day of our shoot have to be my favorite; the dress shoes. I can roll out of bed and pop them on and instantly look more put together.

When writing your own songs, which themes do you usually focus on?MP:I try not to focus on anything too hard, really. When I write I'm usually just releasing whatever I feel at that moment. The theme is, honestly, just me and my experiences.