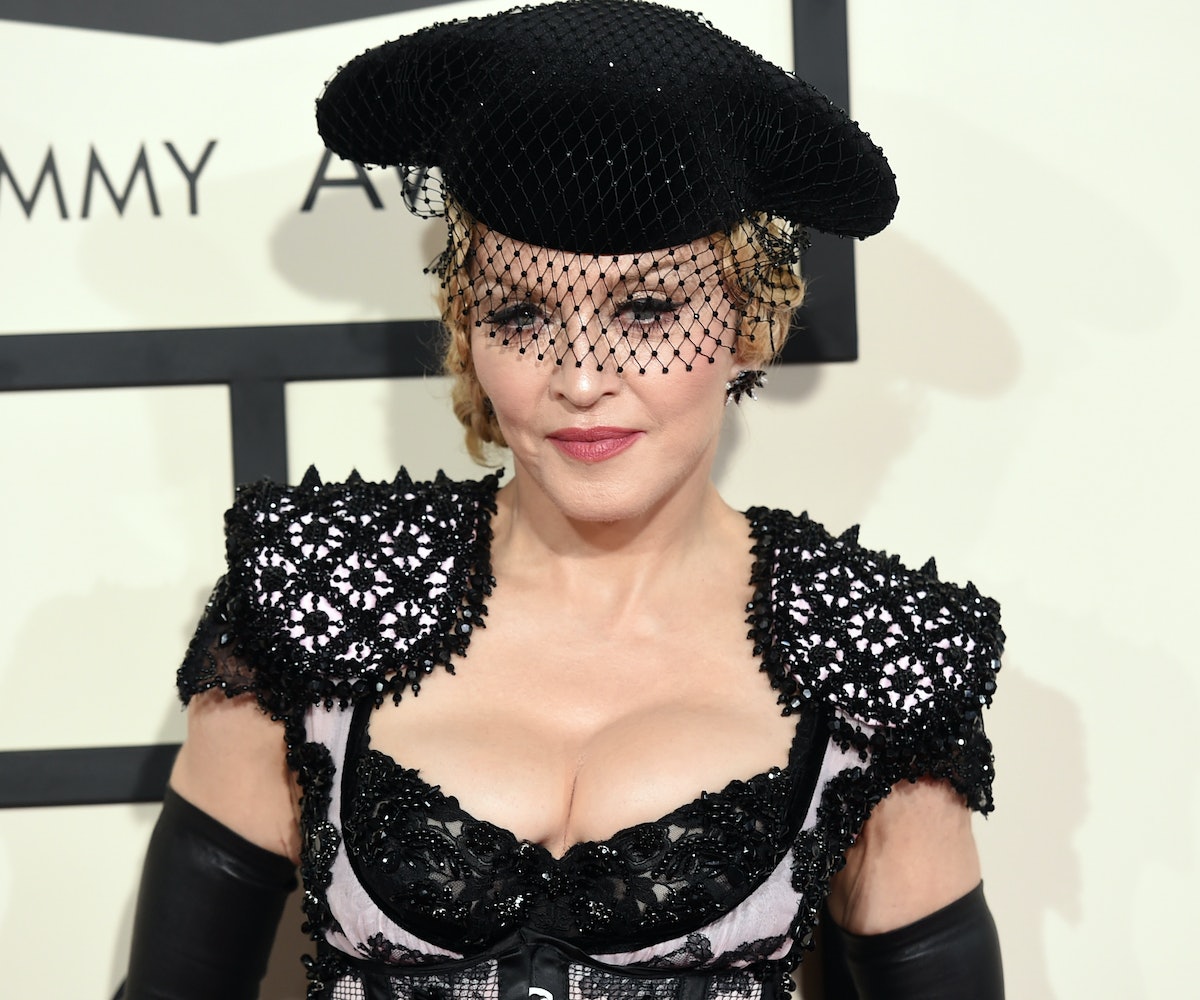 Last night, when Madonna accepted Billboard's Woman of the Year award, she decided to do something most celebrities don't during their acceptance speeches and kept it brutally honest. Anderson Cooper began with a heartfelt introduction, calling Madonna not only "relevant but revolutionary," and adding that "her music and outspokenness showed me as a teenager a way forward. Through her music, she told me and millions of teenagers—gay and straight—that we are not alone."

Madonna went on to prove she's just as inspiring and outspoken as ever during her speech. "I stand before you as a doormat," she opened. "Oh, I mean, as a female entertainer. Thank you for acknowledging my ability to continue my career for 34 years in the face of blatant sexism and misogyny and constant bullying and relentless abuse."

.@Madonna's commandments for being a woman in the music industry are absolutely brutal. #womeninmusic pic.twitter.com/YlP8SfEIin — Maeve McDermott (@maeve_mcdermott) December 9, 2016

She reflected on her early days in New York City when "it wasn’t safe to be gay; it wasn’t cool to be associated with the gay community. It was 1979 and New York was a very scary place. In the first year I was held at gunpoint, raped on a rooftop with a knife digging into my throat and I had my apartment broken into and robbed so many times I stopped locking the door. In the years that followed, I lost almost every friend I had to AIDS or drugs or gunshots."

Naming the artists that have inspired her, Madonna called out Debbie Harry, Aretha Franklin, and David Bowie, whom she felt "embodied male and female spirit." "He made me think there were no rules," she said of Bowie. "But I was wrong. There are no rules—if you're a boy. There are rules if you're a girl." She went on to list the impossible standards women in music are still expected to meet. "If you're a girl, you have to play the game. You're allowed to be pretty and cute and sexy. But don’t act too smart. Don’t have an opinion that's out of line with the status quo. You are allowed to be objectified by men and dress like a slut, but don’t own your sluttiness. And do not, I repeat do not, share your own sexual fantasies with the world. Be what men want you to be, but more importantly, be what women feel comfortable with you being around other men. And finally, do not age. Because to age is a sin. You will be criticized and vilified and definitely not played on the radio."

She talked about being treated differently when she was married to Sean Penn, simply because she was "no longer a threat." Then she made her Erotica album and Sex book, for which she was called a "whore" and a "witch," and meanwhile Prince was openly expressing his sexuality and being praised for it. "This was the first time I truly understood women do not have the same freedom as men," Madonna said, tearing up. It wasn't just men that Madonna was facing virtiol from at this time of her life. Feminist author Camille Paglia said Madonna "set women back" by being so overtly sexual. "So I said 'Fuck it. I'm a different kind of feminist. I'm a bad feminist.'"

She ended the speech with a message for all women: "Women have been so oppressed for so long they believe what men have to say about them. They believe they have to back a man to get the job done. And there are some very good men worth backing, but not because they're men—because they're worthy. As women, we have to start appreciating our own worth and each other's worth. Seek out strong women to befriend, to align yourself with, to learn from, to collaborate with, to be inspired by, to support, and enlightened by."

Another powerful moment during Billboard's Women in Music event was when Kesha accepted the Trailblazer award, reflecting on a difficult few years, battling Sony and Dr. Luke in a sexual assualt case that was eventually dropped. “I didn’t really feel like standing and getting an award—I didn’t feel worthy of that,” Kesha said. “But I knew I had to drag myself out of my bed, put on my damn boots, walk up here tonight and say thank you to you guys. And to my peers, your support over the last few years has literally saved my life." Pop stars that supported Kesha during her lawsuit include Lady Gaga and Taylor Swift

“I’ve never really thought of myself as a trailblazer," Kesha admitted. "I’m just as scared and flawed as any person I know. My message has always been to believe in yourself and love yourself just as you are. When I write those words, I do so as a reminder to myself as much as anyone else.” She talked about her "crippling anxiety," being in recovery for an eating disorder, and the importance of speaking out about both. "I know I’m not alone," she said. "These are struggles millions of people around the world deal with on a daily basis." She blamed society's beauty standards, and said as she got sicker, people told her she looked better. "I’ve decided I want to be part of the solution. And that’s why I decided to stand confident in my ever-changing, totally imperfect body and try to live up to and practice the self-worth and self-love that I preach in my music.”

She ended with another empowering message: “Finding the strength to come forward about these things­ it’s not easy, but maybe by me standing here telling my story, I can help somebody else who’s going through something tough. I know it’s scary, but once you take the first steps to help yourself, your life will completely change in the best ways.”