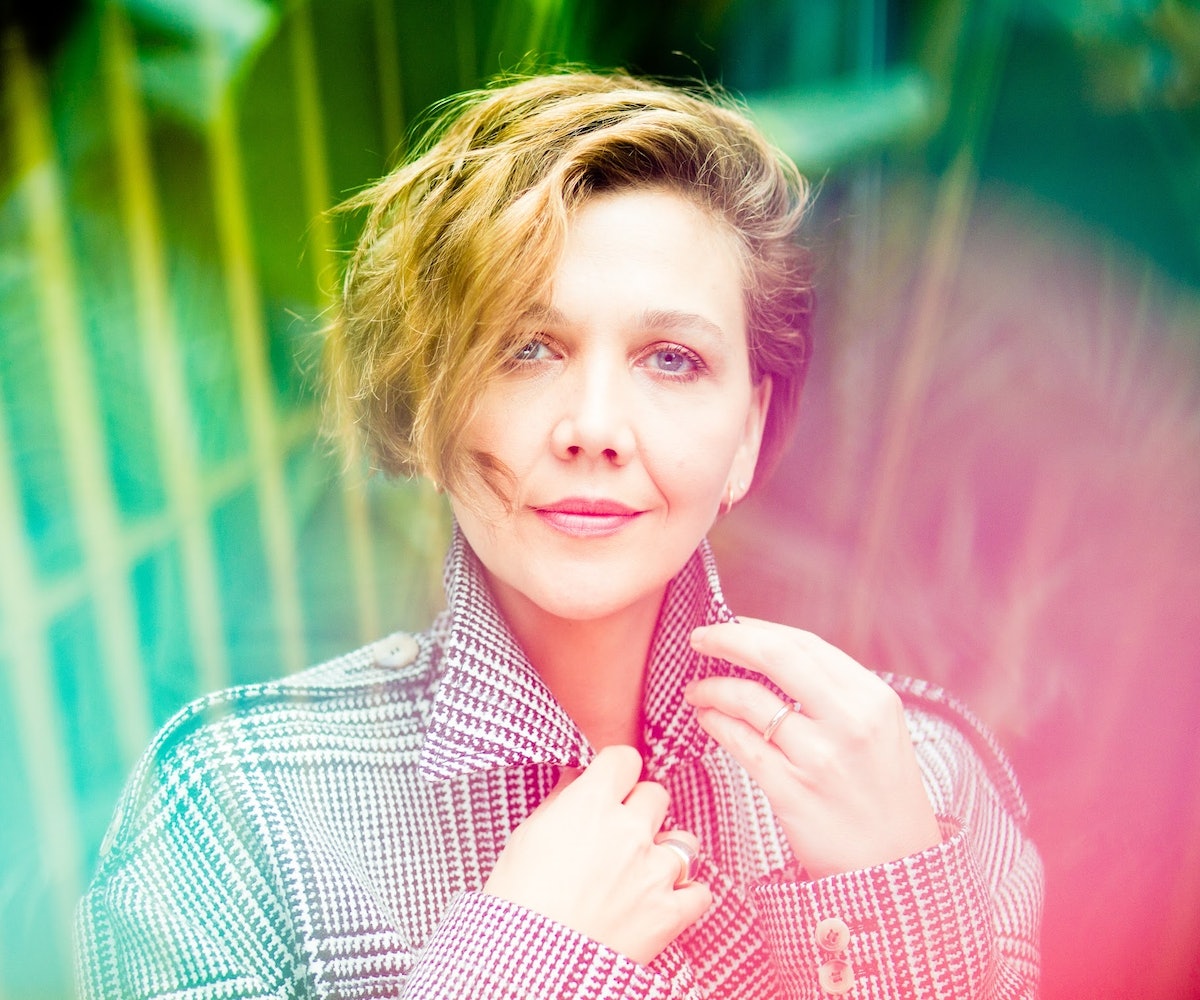 In her new Netflix film, The Kindergarten Teacher (out today), Gyllenhaal once again plays a woman whose true potential is stifled by external forces. Gyllenhaal is Lisa Spinelli, the titular child educator and aspiring poet who discovers that one of her young students might be a prodigy in the exact literary vocation in which she craves acceptance. When those in Lisa and her protege's immediate orbit seem underwhelmed by his potential brilliance, she takes matters into her own hands and becomes increasingly obsessive and unhinged in the process. Written and directed by Sara Colangelo, The Kindergarten Teacher is an emotionally intense and psychologically complex treatise on the lengths a woman will go when it feels like the world is passing her by. We caught up with Gyllenhaal last month—when she was on hand for the film's Toronto International Film Festival premiere—to discuss what attracted her to the role, how the rise of Trump affected her creative process, and why it is that stories about complex women still don't get their due in Hollywood.

What lengths did you and Sara go to in order to develop Lisa’s backstory?

I don’t usually really work like that. I read the script that Sara wrote, and it was so unusual. It didn’t fit into any kind of category that I could identify, and it went straight into my heart. I think because it really was an expression of something feminine that I really haven’t heard expressed before. This is the consequence of what happens from the point of view of a bunch of women, if you actually starve a woman’s mind. It’s dire.

Have you ever felt deeply starved in the same way?

Oh yeah, and so has every woman—so have most people. But I think in terms of women in the world, and I think it’s becoming totally undeniably obvious, we always have to twist ourselves into pretzels and bend over backward and we’ve accepted things for so long that basically now everyone’s like, "I’m not wishful thinking any longer, this is the way it is." And that’s kind of fucked up, and it isn’t okay with me. For Lisa, she’s not even able to articulate that, but I think you meet her where she’s at a point where she’s starving. It’s interesting because I have The Deuce coming out at the exact same moment where you also meet Candy when she’s starving, but Candy knows what she wants. She’s so savvy, she really starts moving really slowly down this path to get it. Lisa goes on a completely strange path to get it.

It seems you’re attracted to playing women who are undergoing some kind of an awakening. Is that fair to say?

I’m interested in things that allow me to explore something that feels relevant to me in my own life.

And I guess that shifts as you move through life.

As you grow up, yeah. It’s always dramatically interesting to play someone who’s going through change. It’s classic. You have to have that, I think, and then what change means shifts as time goes on, but I don’t think that it’s a coincidence that many, many women right now are going, I’m starving, I need more. I was doing press for The Deuce,and I was on [The Daily Show with] Trevor Noah the other day, and he was like, “I saw the trailer for The Kindergarten Teacher the other day, and I don’t know what category it goes in. Is it a thriller, is it a horror, is it an intimate movie about women?” I think it is new.

I think it could be all three, and that’s what makes it interesting.

That’s right. It is about all three, but there’s also weirdly a bit of humor in it as well. And the reason that there’s something new happening right now is because, I think, there’s a door cracked open for something feminine right now. And just because something is written and directed by a woman, it doesn’t mean that it’s an expression of something feminine. A woman can direct something and it can still feel male. So it’s hard to make the space in your mind as a woman to express the things that have never been expressed before, because there’s no model for it.

Sara has said that the way Hillary Clinton was “tortured by this cult of likability,” during the election affected you guys in a palpable way. Did you feel that as well?

That’s interesting. I wouldn’t say that for any of us that was an actual intellectual choice. That was just the world we were in. We were in a world where Trump had just won, and the script was written before that. But he had already won, and there was this kind of feeling of deep activation and terror and malaise at the same time—this radical feeling. That definitely informed us.

Do you often use what’s happening in the real world to inform the choices you make in front of the camera?

Yes, but not in an intellectual way. It’s just where we all were. We were like, What the fuck is going on? And as women, I think in particular, to have just elected someone who said its okay to grab them by the pussy, women were activated by that, and this whole fantasy that we were living in a feminist culture was shattered. We were making a movie in that climate. But I did think it was very important that Lisa be a wonderful teacher—that she be warm, that she be an interesting poet. There are people that have written that she’s a mediocre poet. That’s a wish. Her poems were written by a brilliant published poet, by a star. The movie would be way easier if she’s not a good poet. She’s a real poet, and nobody gives a fuck, and she’s completely written off. That’s much more difficult to watch, if she’s a great teacher, and if she’s curious, bright and she’s interested and alive. She’s not fundamentally crazy, she’s not mentally ill. But she’s driven crazy by the culture that she finds herself in.

It feels like you’ve developed this real connection with Lisa. Do you miss her now that she’s gone?

No, I really do not miss her. I care about her and I relate to her as, I think, many women—if they’re honest—will. I think people root for her for at many points in the movie.

Was that a goal of yours?

Oh yeah, that’s the movie. She can’t be a bad lady. Who cares if she is? You need to not understand why this person you like is doing these things and then find yourself on the wrong side of the moral line.

Did you remember having any formative relationships with a teacher?

That were really fucked up in the end?

Well, that too. But I know some actors develop really strong bonds specifically with their acting teachers.

I had a really, really close relationship with my acting teacher who died two years ago, who I still kind of hear her advice in my head. I think about her a lot. She was like a good witch, I learned so much from her. I have a child who’s the same age as Jimmy is in the film and I know what it means to be that age. I was thinking about being somebody who’s really great with children, who understands their minds. But I hated having to live it, I found it very hard.

It was painful to be her. It’s not the same as being the triumphant Candy. Even if Candy has horrible things happen to her, her mind is clear. She’s got a clear thinking, working mind. Lisa, I was so happy when it was over. I even hated wearing her clothes.

Do you find yourself looking for a cleansing role after making something like this?

No, I just take a break. I’m not really looking to make movies that make me feel really good. The thing is, we had no money. We made our movie in 22 hard days and I was done.

It sounds grueling, but I imagine it can also incredibly rewarding.

I have two schools of thought about that. One is, yes, you’re totally fed by that. It was in New York, it was 22 days in the summer, and hard, hard work. And, of course, when you’re working hard, it also feels good. You turn the camera on and get what you get. But on the other hand, I wonder why don’t we have any money to tell this story—the story about a woman who's 40. And it’s a thriller!

Thank god for Netflix! I do think it’s interesting why we have to make it non DGA in 22 days. Wouldn’t it be nice if we had a little more money, not to put in our pockets and take home, but to make the movie we wanted to make? And yet, we were like, "Whatever it takes, we are not going to stop until we get this." And we didn’t, and I’m so proud of us. And, of course, thank god for Netflix.

All Photos by Myles Pettengill.