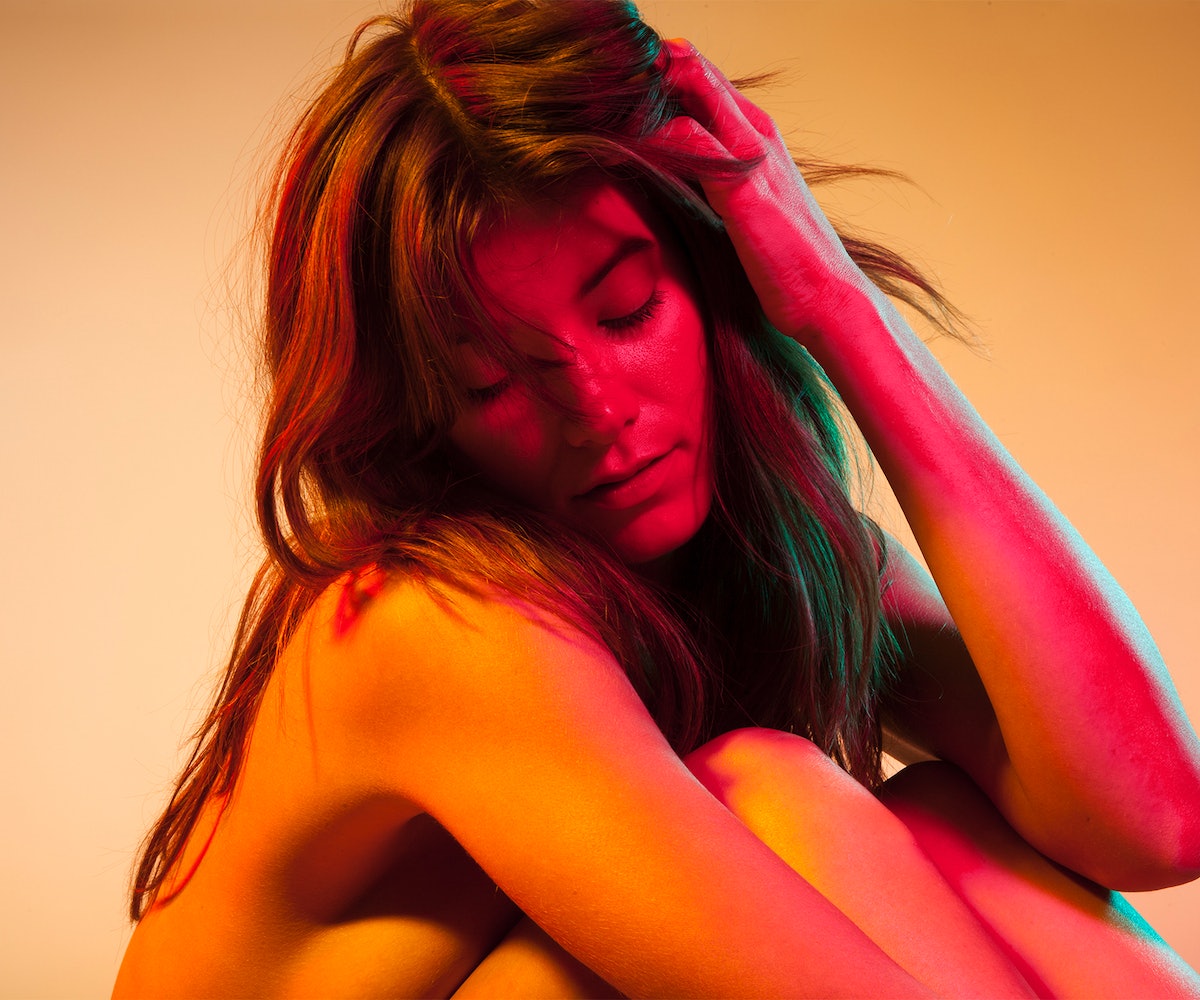 The body is present in photographer Maggie West’s second book, 23. The human form in all its variations bathes, basks, contorts, poses, and rests under a spectrum of saturated magentas, oranges, purples, and blues. Cis bodies, trans bodies, queer bodies, all look out from the frame tenderly composed by West. It’s a sublime collection of photographs that go beyond the male/female binary, reveling in the vast spectrum of human gender and sexual identity.

23 does something magical. It doesn’t eroticize the nude bodies it features; it doesn’t seek to exploit or arouse; objectification, a theme that’s still ignorantly prevalent in the fight for equal transgender rights, is not to be found. Rather, West's photos, as well as the accompanying essays from folks like writer Gaby Dunn, MTV's Darcie Wilder, ex-porn star/novelist Christopher Zeischegg, and trans model and Strut star Arisce Wanzer that are peppered throughout 23, make a strong case against such exploitation, to powerful effect. As a photo series, it's both timely and timeless. May it elevate the body, and all its diversities and perceptions, in our objectifying culture.

Ahead, our conversation with West. 23 comes out April 26.

I appreciate how the photos and subjects aren't eroticized in any way; instead, they simply celebrate the human form. Was that your intention?

With 23, I wanted to exhibit a collection of photos that were inclusive of all genders and sexual identities. The book is meant to showcase the similarities and differences of each model without being vulgar or exploitative.

Talk to me a little about the lighting; why go for saturated hues and not black and white?

Most of my body of work examines genuine emotions in artificial settings. Our visual experience is largely affected by our perceptions of color. I’ve found that when you dramatically alter colors of a subject, it causes the viewer to stop and reconsider what they are looking at.  Or, to use a popular phrase, it helps people to “see things in a new light.”

How did shooting 23 and putting the book together influence your perspective on gender? What did you learn about sexuality through this project?

I have always felt like both gender and sexuality exist on a spectrum rather than a binary scale. People aren’t 100 percent one thing or another, but rather a combination of physical and mental traits that are combined together in a unique way.

With 23, I wanted to make a book that had a more contemporary outlook on gender and sex. While looking at a lot of existing nude photography books, I noticed that most of them dealt with sexuality in a very stereotypical way: masculine men, feminine women, etc. With this book, I wanted to give models a chance to be seen as individuals existing on that spectrum.

While shooting the book, I had a lot of conversations with the models about their sexuality, gender, and social acceptance. It’s crazy to me that in 2017, people still have a lot of misconceptions about so many groups of people, especially trans men and women and sex workers. I hope, in some small way, this book helps with that.

Do you see a difference between "nude" and "naked"?

To be honest, the number 23 was completely arbitrary. I initially started out with 10 models, then 12, then 15, and so on. I just kept meeting interesting people that I felt would be great for the book.  Eventually, I realized that this process could go on forever unless I picked a number to stop on. That number happened to be 23.