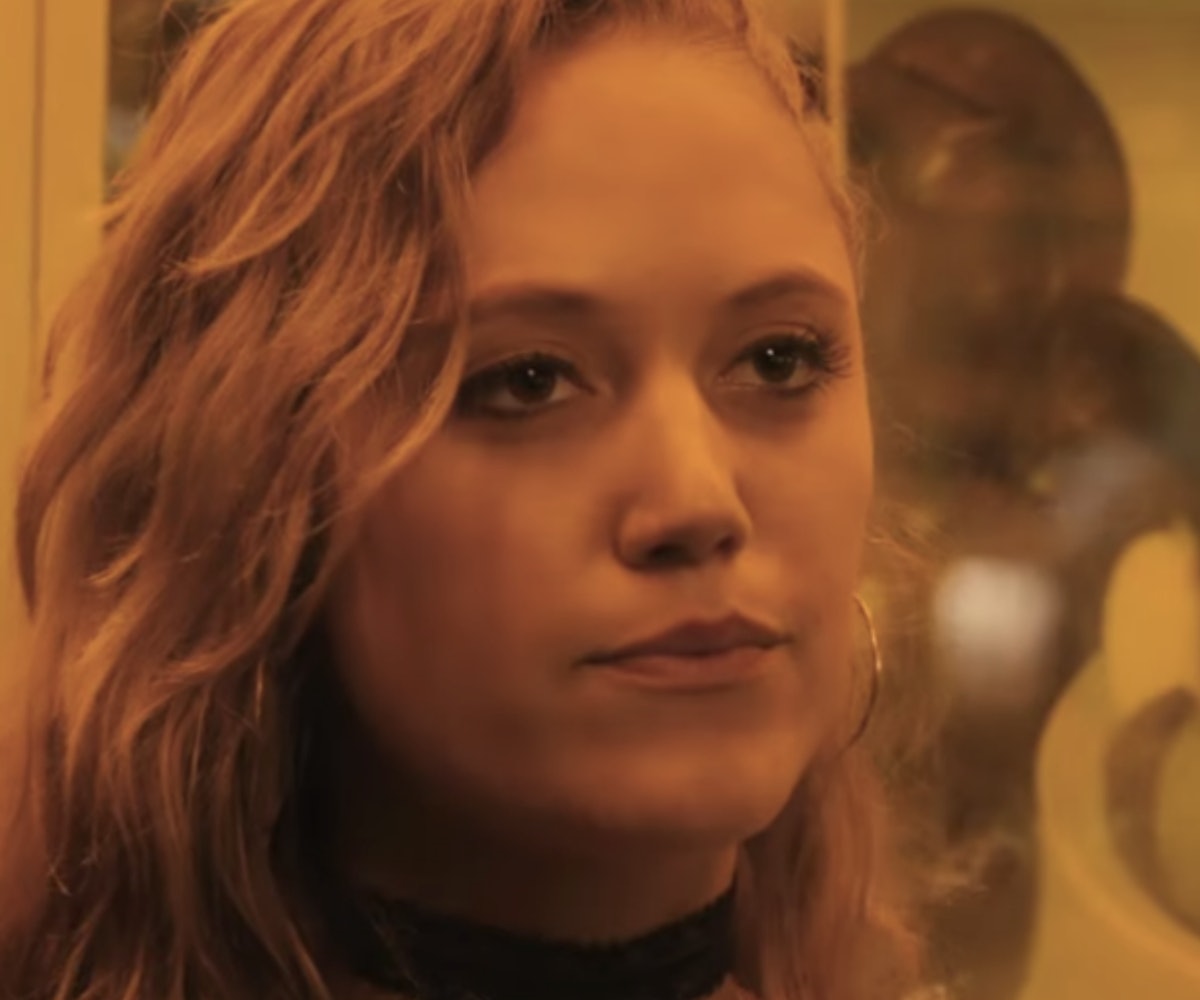 Maika Monroe is no stranger to challenges. A former pro-kiteboarder (and one of the few women in the sport), as well as an accomplished actor with roles in critically acclaimed genre flicks such as It Follows and Tau, Monroe probably has one of the more eclectic resumes in Hollywood, but it seems like all these experiences are slowly preparing her to become an A-list leading lady—sooner rather than later.

Monroe is set to star in the forthcoming crime thriller Stockholm, as well as Shia LaBeouf’s Honey Boy, an extremely meta biopic of sorts based on LaBeouf’s own life. But perhaps her most exciting project to date has been Elijah Bynum’s coming-of-age narrative, Hot Summer Nights. Starring Timothée Chalamet as Daniel—a teen who gets caught up in a dangerous drug dealer turf war after being sent for the summer to Cape Cod—it's a film that plays into its nostalgic '90s setting and teen romance roots. Monroe plays Chalamet's love interest, McKayla, a fiercely independent “cool girl” with a ton of emotional baggage that Daniel helps to unpack, and it's... hot.

Ahead of the summer film premiere, perfect for any teen who feels trapped in what feels like suburban, humdrum limbo, we wanted to speak with Monroe to learn more about her forthcoming projects, what it was like working with one of Hollywood’s most in-demand actors, and how kiteboarding helped her prepare for the role of McKayla. Read our Q&A with her, below.

What did you love about Hot Summer Nights? What drew you to the project initially?

I read a bunch of scripts, and this one just stood out. First of all, it was so fun to read. Most of the music that was in the movie was in the script, so you were reading it and also looking at the soundtrack. And then I met with Elijah and we talked about it and it really just seemed like something special.

I look back to when I was 17 to 18, and it’s just such an interesting age because you're trying to figure out who you are. You're becoming an adult, and so many things are changing. So I'm always intrigued by that, and I enjoy watching coming-of-age movies. And I thought there was something so fun about this character. As the movie goes on, you start learning more about her past and her family, so she's just this girl who kind of had to raise herself. And there's this toughness to her because of that. She had to grow up fast, and reading that really spoke to me.

A lot of it was music—listening to music and just, like, drawing from my own experiences, I guess. I'm a girl, and I went through that time in my life trying to figure it all out—first loves, heartbreak, loss—so I tried to use those things and bring them into the character.

What about the toughness you mentioned? How do you embody a quality like that?

Before acting, I was a kiteboarder, and I was a pro-athlete pretty much when I started. I learned to kiteboard when I was 13, and I was one of the only girls kiteboarding at the time. Now, more and more girls are doing it, but the sport is still so new. Anyway, I was pretty much the only girl hanging out with guys at the time, and to deal with that, you have to be tough. Doing the sport itself, you have to be tough—you have to be physically strong. [But there was a mental aspect of it, too], like I moved to the Dominican Republic to train when I was 17, and I think that really kind of influenced me and helped me become who I am.

Were there any situations you found particularly difficult while kiteboarding? Especially as one of the only woman around?

Yes and no. I mean one of the reasons I started was because my dad did it. And I finally convinced him to teach me when I was 13. But one of the things I loved about it was that no other girls were doing it. I was kind of like breaking this barrier and showing guys we can be just as good and just as strong. I didn't feel intimidated really ever. The only thing is, having everything run by a bunch of dudes can get old.

What made you redirect to acting?

I grew up dancing as well. Dancing and kiteboarding were big parts of my life. I really had no interest in acting, because I never thought about it as a real career. But I was hired to be a background dancer for a movie, so I went on set and, just watching the process of a movie being made, I thought was so cool. So after that, I was just like, “I want to try and do this.” So I started auditioning, but also at the time I was kiteboarding.

I'd get close to getting [acting gigs], but it never worked out, it was just kind of frustrating not being in control. Like, kiteboarding, you can train to get better, you see progress, and you can physically get stronger. With acting, so much is out of your hands. So at 17, I decided that I was going to take a break from acting and move to the Dominican Republic. My agent at the time would just send me a couple of movies and stuff, and I would kind of just decide if I wanted to put myself on tape or not. So I did tapes with my mom in our weird apartment and sent it out.

The first movie that I ever did really was [At Any Price], and it was pretty crazy going from living in the Dominican Republic—in this tiny little town on the beach, very poor—and then shooting this movie. It was a huge lifestyle change. That was pretty bizarre for me at the time.

You're becoming pretty well-known for your work in a lot of really critically acclaimed genre films. How do you go about picking roles, and what makes you gravitate toward a certain project?

Oh man, it's really changed. When I first started acting, I just wanted to get a job to make money and pay rent and be able to eat food. So I pretty much would take anything. And then, you kind of feel this shift… where there are people wanting to work with you, people wanting to meet with you. So now, you're like, “I want to pick cool characters and challenge myself and do different things.” This phase I’m in now is where it's about the director. No matter how big or small, I just want to work with directors that I respect. A lot of times, with my team, I'll see a movie, and then just reach out and say, “Hey, I want to meet this person, see what they're doing next.” And I don't necessarily care how big or small the role is.

You have a relatively large role in Hot Summer Nights. What was it like working with such like a relatively young cast and crew? That’s definitely a lot different from the industry norm.

Yeah, I don't think you normally see such a young group all around. Cast, yes, but crew members and directors, not so much. I think Elijah was 28 at the time we shot it and... I mean, it’s such a fun movie, and so having, like, a bunch of young people around making this movie together—all working hard and believing in this film—was great.

Did you find there was an atmosphere of camaraderie that was different from other productions?

Yes, I definitely think so. I think Elijah worked with or went to school with a lot of the crew members, and they were super-close. And all of us actors became super-close.

So what’s it been like for you to watch Timothée Chalamet blow up?

Crazy. I mean, we always knew he was such a special kid and incredibly talented, so it wasn't a shock. I mean, with our job it's crazy—overnight anything can happen. But, he deserves it. I mean, he really is so special. You meet people with this job, and there are just those people that are meant to do this—born to make movies—and I believe he's one.

Speaking of people who’ve been in the movie business awhile, I know you’re also in Shia LaBeouf's new movie.

Yeah, it was a pretty wild experience. It's somewhat based on Shia's life, so it was pretty cool to talk to him about the character that I play. Like, about the real girl that it's based on, who she was to him and the importance of her in his life. It was definitely a wild experience, and then Lucas [Hedges] is an actor I really respect. So to work with him and watch him kind of become Shia… I'm very excited to see how it all comes together.

For this project [though, Shia] had to spend about eight hours in hair and makeup. And he's playing his father. And a big thing in the movie, which I really like, is the music. So even if Shia isn't working until the end of the day, we'd be in the hair and makeup trailer together, and he would play different music. If Lucas came in, he would play music for Lucas. If he wanted to get in the mood for his character, there's music he would listen to. He would play the music that this girl [I play] got him into. It was really cool. It’s so interesting to talk to the person [who lived this, like] these are real people. Being able to ask questions was amazing.

Is your character his love interest?

Yes, you could say that.

Did you get to meet the person who your character is based on?

Hot Summer Nights is out July 27.