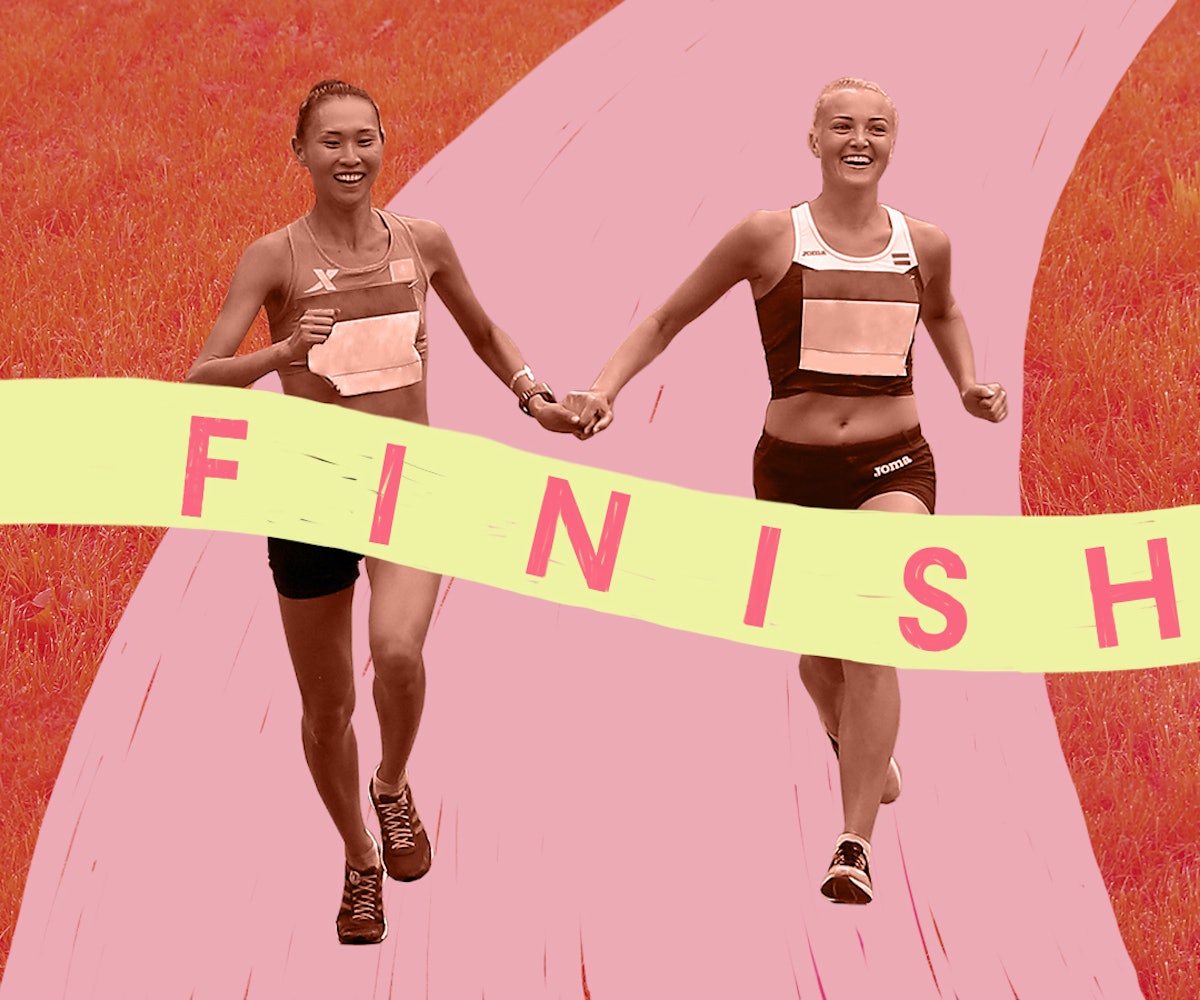 Illustrated by Jihyang Lim.
by Taylor Bryant
May 17, 2017

Running is hard. Running continuously for 26 miles is pure masochism. And yet, people do it year after year for the Boston marathon, the New York City marathon, the Chicago marathon, and all of the other prestigious marathons in between.

Of course, the whole "running is hard" sentiment is just the opinion of one writer struggling to make herself into a person who enjoys running (more on that later). There are plenty of people out there who take a lot of pleasure in the act. So much so that they make marathon races a thing that they do on the regular.

As you might imagine, a lot goes into preparing for an event of that caliber, including but not limited to a lot of running. You also have to take into account what you’re wearing, what you’re putting into your body, how much training you should be doing, and how to handle any hiccups and injuries that might come up along the way. To prepare you for the race you have coming up, the race you’re thinking about running, or maybe the race you hope to do in the near future, we asked some runners what they wish they knew before signing up for their first marathon. It’s all good advice for both the seasoned and the aspiring runners among us.

The most time-consuming part about running a marathon is the training leading up to it. Take these running sessions seriously, veteran marathon runner Natalie Rinn says, while also taking it easy on your body. Even though I had been running every day prior to deciding to run my first race, the runs I'd been taking had not been long enough. Successful marathon training means running between 18 and 20 miles up to three times prior to race day. I, on the other hand, had run just 18 miles one time. The simple fact of the matter is that our joints and muscles—even if you are technically in shape—cannot sustain that kind of wear and tear without breaking down if you haven't prepared them to do so. In my first marathon, while I was able to run the whole time and finish under four hours, I sustained a knee injury that put me out of commission for months afterward.

She learned from her mistakes, though. Two years later, I decided to run another marathon but to do it with proper training. I ran between 16 and 20 miles three times and took longer runs, between 10 and 14 miles, for several Sundays prior to the race. There are tons of basic schedules available that you can follow. And—it worked! I finished that race 10 minutes faster than the first and, more importantly, was injury free when it was over.

Rinn concludes: "Long story short, do yourself a favor and put yourself through the torture of those three-to-four long runs before your marathon. You'll be so thankful you're not immobile for months after the race when you could already be outside training for the next one.”

Run more in order to finish

On top of running more to help avoid getting injured, you should also run more to make sure you can actually complete the race. It’s the advice longtime runner Jessica Louie’s taking with her when she runs the New York marathon later this year: During my training, I didn't dedicate enough time to train successfully and was only running at most 15 miles. During my first marathon, my legs got completely numb at mile 18. I stopped and stretched before continue running, but now I realize how important it is to set up a training calendar that will indicate how many miles I need to run each day and the type of training I need, whether it's speed, hill, or long-distance.

Though John Honerkamp considered himself well-trained and knowledgeable going into his first race (he now coaches runners of all ages for New York Road Runners), what he wasn’t prepared for was the course at hand which, in his case, was in New York City. “So many runners told me about the 59th Street Bridge and 1st Avenue, but failed to tell me about Mile 23 on Fifth Avenue from 110th to 90th streets: There is a subtle hill. I didn't realize I was running slightly uphill, and so, when my time slowed, I thought I was ‘hitting the wall’ everyone talks about, but I was actually doing well.”

“The wall” is real

That “wall” Honerkamp mentioned? It’s a thing, and it’s the one thing that Luis Tejada, a "veteran recreational runner," wishes he knew before lacing up. He describes it as the point in the race when “you're physically out of it, but try to be as mentally strong as possible, yet you see others around you breaking down.” He continues: “I didn't know about this before the marathon and felt great once I hit miles 19 and 20, but then quickly noticed others around me falling apart, and it definitely messed with me mentally. The great news is that I powered through and still finished!”

Your focus might be on the miles ahead, but your clothing factors into how comfortably you’re able to reach those miles. Sharrie Huang, who's run a total of 28 races, says:During the morning of the NYC Marathon, I layered up with two old sweaters—these are the article of clothing that I would chuck right before the start of the race to keep warm. I was told the starting line at the Verrazano Bridge in Staten Island gets very windy, so I also brought a windbreaker jacket to wear during the entirety of the race. In addition, I also had a fanny pack that held an external battery for my phone, two gel packs, and gummy candy. It doesn't sound like a lot, but I wish I never brought the fanny pack because I never used it before during long training runs. It didn't feel heavy while I ran, but after mile 20, everything seemed to bear exponential weight. The fanny pack, the windbreaker jacket, and my phone, everything felt so heavy and I wanted to throw it all away.

Maria Bouselli considers herself pretty new to the marathon life, though she's run two half marathons and a dozen other races, ranging from 5Ks to 18 miles, in the past. If she could go back to the beginning of her first marathon last year, she would choose water over Gatorade. “I felt sick from mile 10 on. Thankfully, I didn't have to stop for any bathroom breaks during the race—I pushed on—but I wish I didn't start drinking that until I really needed it, at like the halfway mark. My stomach was messed up for a good two days after because of that.”

Training will always feel harder than the race itself

“This may sound snotty, I'm aware, but it's never as bad as it sounds” Lauren Welles, who has several marathons under her belt, tells us. “I was SO nervous before my first marathon, because it's a very long distance, of course, but also because as more people learn that you're training for a marathon, you get more and more wide-eyed responses from runners and non-runners alike saying, ‘Wow, that's amazing! That is SOOO far!’"

Welles remembers: I started wondering if I would be able to finish despite feeling pretty well-trained and in shape. I was running the race with my dad, which added a level of reassurance. But the entire time, while I was busy playing the pass-the-times tricks I traditionally employ—I do a lot of random math on the course—I started to realize that all of the distractions on the course were carrying me along in a way; miles were passing and I barely noticed. The excitement of being in a marathon, natural race adrenaline, and sheer volume of things of visual interest—reading hysterically funny signs along the route and checking out the various Chicago neighborhoods—combined to hold so much of my attention that I tell people I felt like I got eight free miles. The moral of the story here is I guess that training will always feel tougher than the race itself because you're just trying desperately to log the miles most likely on the same course every day, but on marathon day there will be crowds of people cheering, tons of noise, and ever-changing scenery. It will probably feel shorter than your longest training session.

Have a post-race game plan

It might seem pre-meditated, but Honerkamp says knowing what you’re going to do after you cross the finish line is just as important as the race itself. “Have a post-race plan. Where are you meeting your cheering pose? Your cell phone might be dead or not work due to cell saturation.” His suggestion? “Pick a bar or restaurant or hotel lobby to join your peeps.”

Pushing your body's limits is a draining experience, so expect a few feelings, Bouselli says. “There will be tears. The moment it really hit me was when I saw my first two friends at mile seven—I almost started full-on crying. It's definitely an emotional experience! But it's really so amazing, and you should enjoy, or try to enjoy, every minute of it—even if you think you lost a toenail, which I did around mile 19.”

Speaking of, you might only do this once, so take it all in. “Don't get me wrong, I feel like I definitely soaked what I could in as I ran, but I was too focused on my time," Bouselli says. "I wish that I had actually stopped to see my friends, boyfriend, and family when I ran by and taken a picture with them. The race, even though it feels like it's taking forever at points, really does go by fast.”